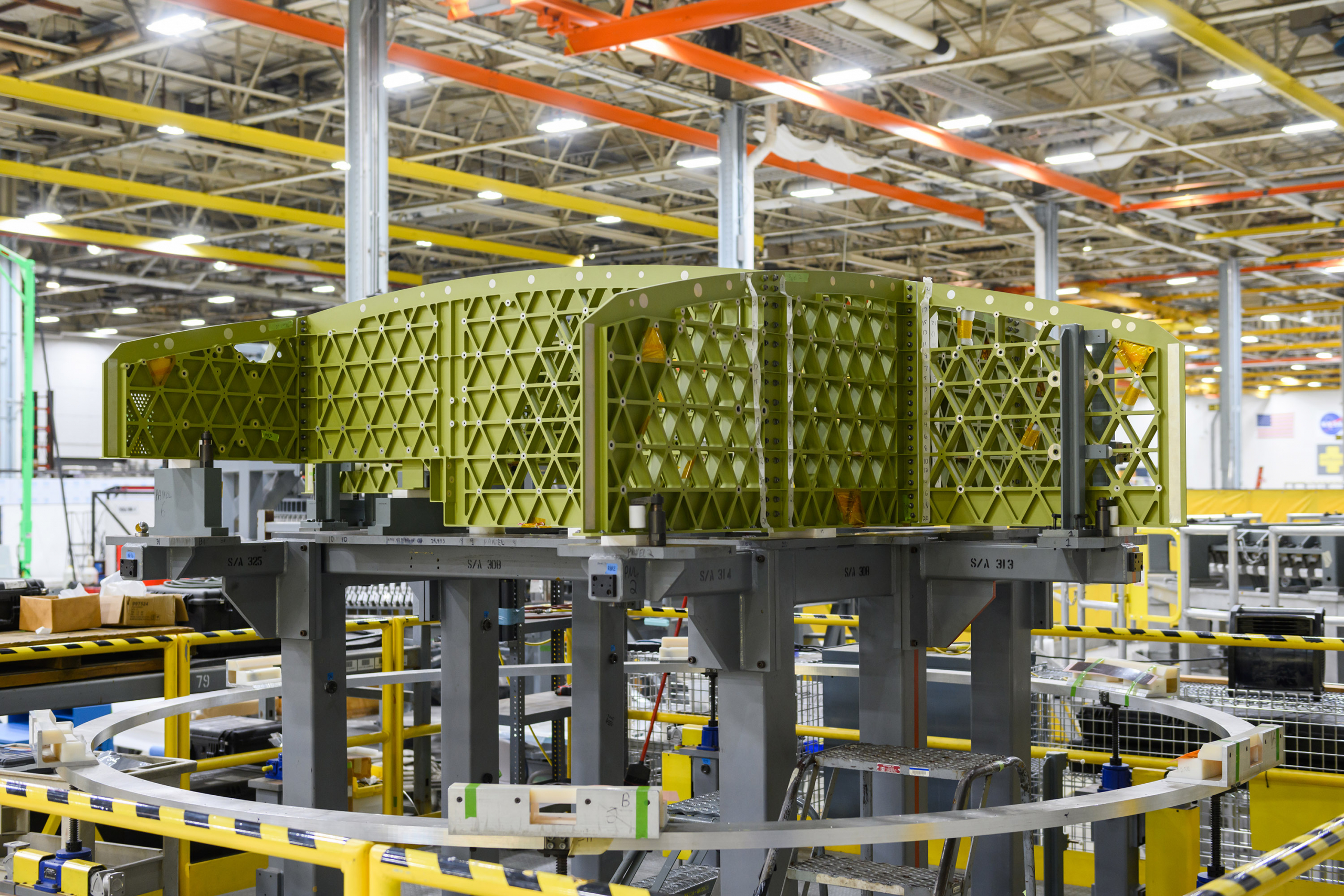 With the Space Launch System (SLS) and Orion currently at Launch Complex-39B and ready for the Artemis I launch to the moon from NASA’s Kennedy Space Center (KSC), additional work is progressing at the Agency’s Michoud Assembly Facility for other Orion spacecraft.

The Michoud Assembly Facility (MAF) is located in New Orleans, LA, and has been supporting NASA programs past and present since the 1960s. Numerous components for launch vehicles have rolled out of the facility, including the Saturn V S-IC first stage by Boeing, the Saturn IB S-IB first stage by Chrysler, and the Space Shuttle External Tank by Martin Marietta.

For Artemis, Michoud serves as a major manufacturing and assembly site for both the core stages of the SLS and Orion. “Every one of the large structures for Orion comes through Michoud for some portion of processing,” said Tim Livingston.

Launch Abort System:
One of these structures manufactured for Orion includes the critical Launch Abort System or LAS. The LAS is a system including solid rocket abort motors and other components, including the tower designed to safely get the Orion spacecraft and crew away from the launch vehicle in the event of a launch failure.

The LAS system was last tested as a whole during the Ascent Abort-2 test in 2019. The flight included a launch using a modified first stage of the Minotaur IV from Cape Canaveral’s SLC-36 using a boilerplate Orion and a LAS.

Unlike future Orion/SLS flights, the LAS for the Artemis I mission does not feature an active abort motor or attitude control motor. The LAS for the mission only has a live separation motor.

“We do a fit check of the MATA [to the] the ogive panels, and to the C channels, and we do all the match drilling. And then we take that MATA cone off, put it over there in that fixture and that’s where we install the struts,” said Livingston. “And then we ship that as one unit around to Kennedy and that’s what kicks off all the work in the LAS have done at Kennedy.”

The MATA for Artemis II was recently shipped to KSC from Michoud. “We just finished up all the match drilling and got it shipped down to Kennedy Space Center,” said Livingston in late July. Work is still ongoing with the Artemis II ogives and the C Channels at Michoud.

Orion work at Michoud:
The Orion crew module pressure vessel for the Artemis IV mission is currently under construction at Michoud. Components at the Louisiana facility include the Tunnel and forward bulkhead, which according to Livingston is welded up and staged. In addition, the backbone assembly of the spacecraft is currently assembled.

The backbone is a main piece of the pressure vessel primary structure, but it is sometimes left out of the discussion because it is a bolted as opposed to a welded structure. After the backbone assembly is fully outfitted, it will be attached inside the already-welded barrel and aft bulkhead. Both subassemblies are currently staged upside-down in their work areas.

“We’re waiting on splice plates [for the backbone],” said Livingston. “Once we get the splice plates in here, then we’ll take the barrel and the aft bulkhead, put it over [the backbone], and attach it and then turn it teacup up.” 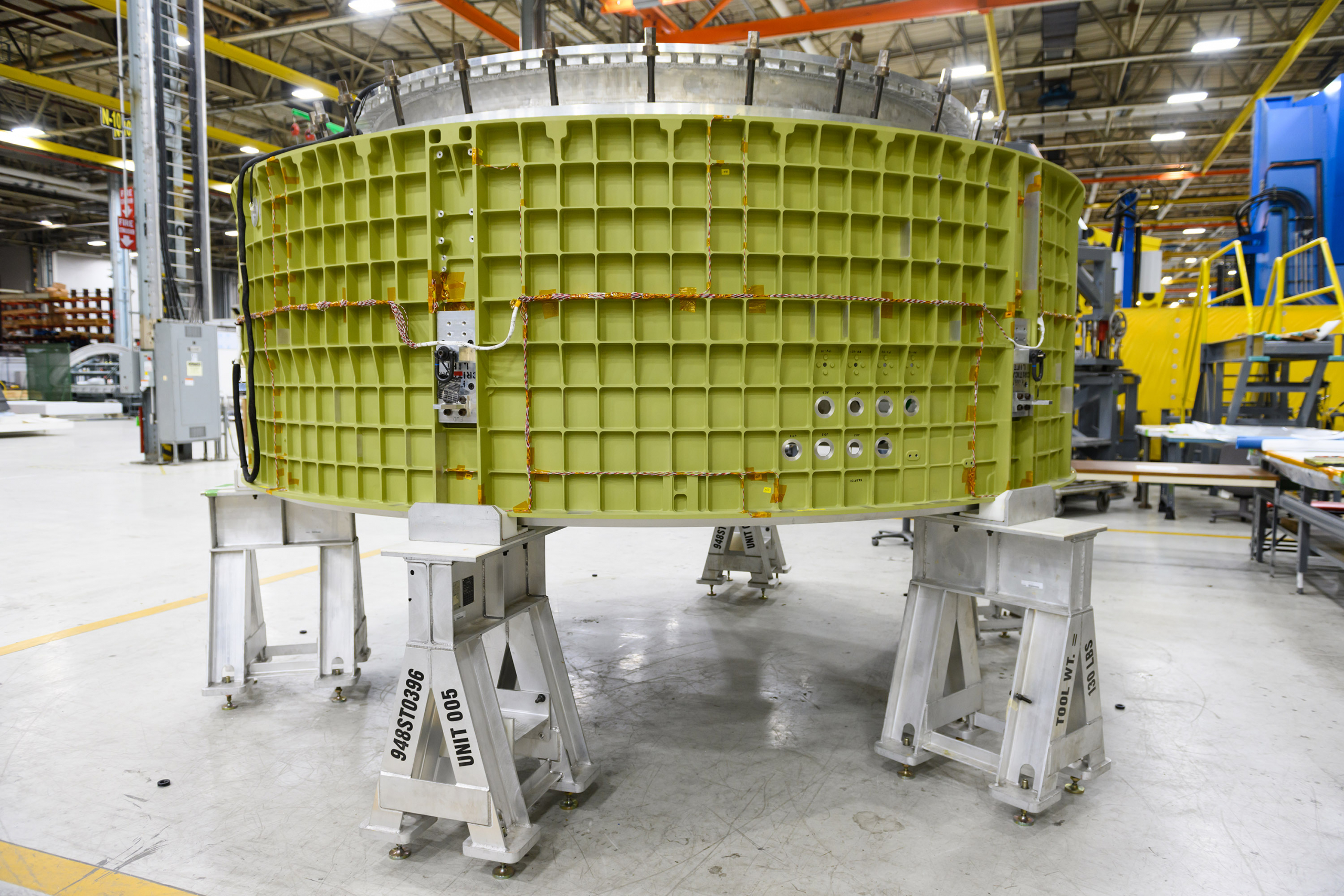 The Artemis 4 Orion barrel section is seen at Michoud in an inverted orientation; out of view on top is the aft bulkhead, which has already been welded to the barrel. Credit: NASA/Eric Bordelon.

Some other components for Artemis IV include the cone panels for the pressure vessel. “We have two of the cone panels…and the third one is scheduled to arrive soon. Probably next week,” said Livingston at the time in late July.

These cone panels are designed by Orion’s lead contractor, Lockheed Martin and are manufactured by AMRO Fabricating Corporation.

The pressure vessel for each Orion spacecraft is made up of seven welds and eight plug welds.

This includes welding the Tunnel to the Forward Bulkhead, the Aft Bulkhead to the Barrel section and welding the three Cone Panels together. This is then followed by the welding of the Cone Panels to the Forward Bulkhead. Finally, after the backbone is bolted inside the barrel section, the bottom of the cone panels are welded to the top of the barrel. 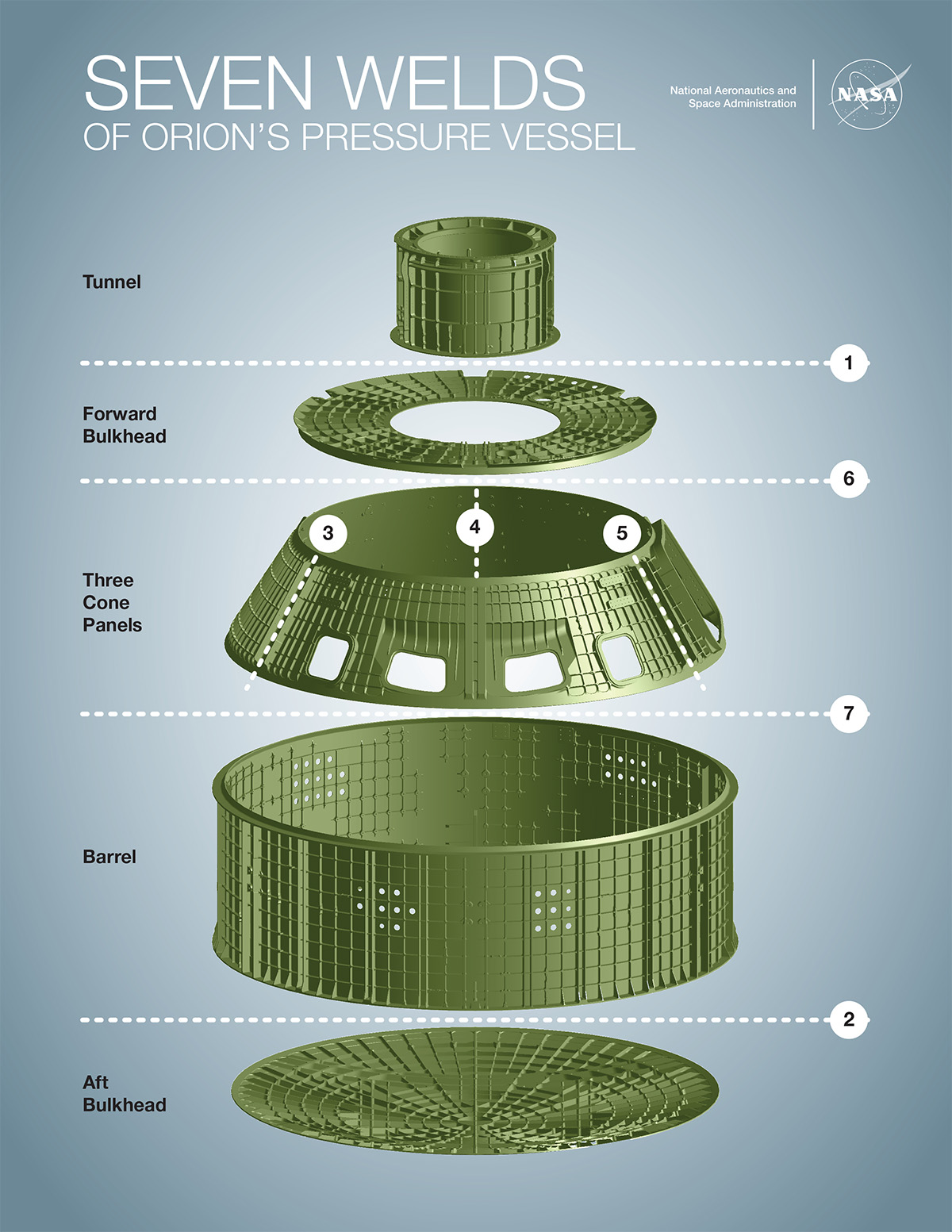 A diagram of the Orion pressure vessel. Credit: NASA

The raw materials for Artemis V mission hardware are currently in the initial stages of being purchased. “It’s in the procurement loop. We’re still not sure what NASA is going to do about reusability and so we [Lockheed Martin] really don’t know how many more [Orion] vehicles that we’re going to actually fabricate versus refurbishment,” said Livingston.

Michoud also manufactures additional components for Orion, such as the thermal protection system material for the aft heatshield. “We also manufacture the Avcoat blocks that they turn into tiles down at Kennedy and bond to the whole aft end of the heat shield,” said Livingston.

The titanium structure that the blocks are mounted to is manufactured in Denver, Colo. Once they heat all of our tile blocks, meet the heat shield down at Kennedy, and then they do the machining and custom fit check and bonding down there,” said Livingston.

While the primary structure is assembled and built in Michoud and the backshell panels and the titanium heat shield structure are fabricated in Denver, final assembly of the Orion crew module and the integrated spacecraft as a whole occurs at the Kennedy Space Center.

Other Orion-related work:
Lockheed Martin is working on finishing the remainder of the structures and associated equipment for Artemis II. The Spacecraft Adapter (SA) cone is currently being stored at Michoud. It connects and serves as the interface between the European Service Module and an SLS stage adapter at the top of the rocket. 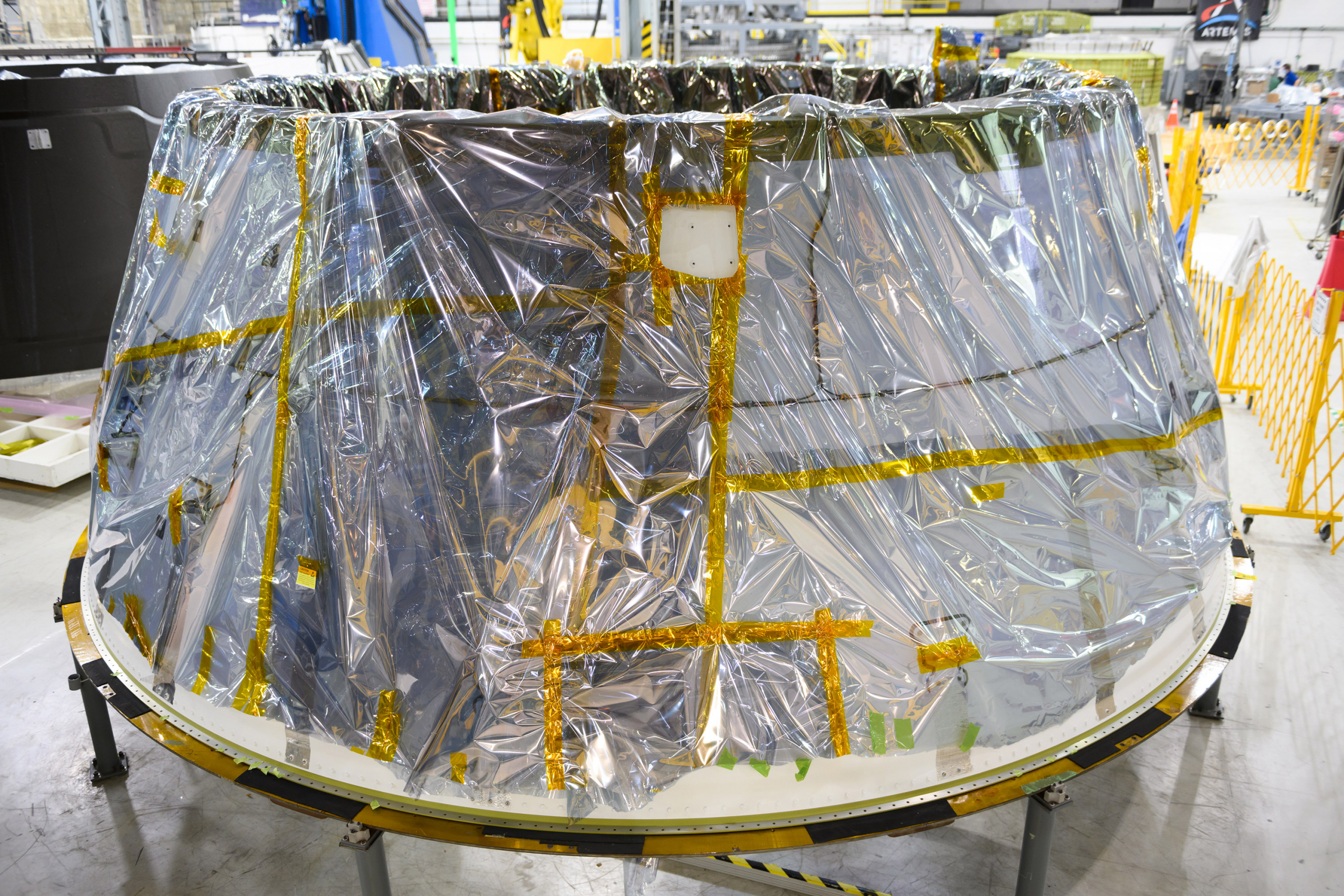 The Artemis 2 Spacecraft Adapter (SA) cone, which is currently in storage at KSC. Credit: NASA/Eric Bordelon.

“[KSC] asked us to just store it here until such time as they wanted us to ship it down there just in time for their installation,” Livingston said. “So currently it’s scheduled to go at the end of next month or the beginning of the following month, depending on the timing of when they create space.”

Two other SA cones are also currently at MAF. The Artemis III SA cone is being prepared for eventual shipment to KSC and one of the things that the teams at Michoud are aiming to do is to use a [Spacecraft Adapter] cone structural test article as the cone for the Artemis IV flight.

“We’re trying to get it into a configuration so it can be used as the Artemis IV [Spacecraft Adapter] cone. So, we’ll save NASA a good bit of money, assuming that we pass NDE (non-destructive evaluations) and all that,” said Livingston.

Michoud is also the site of construction and testing of composite structures, this includes all of the Environmental Control and Life Support System (ECLSS) wall, floor panels, and storage compartments inside the Orion crew module.

The three Spacecraft Adapter Jettisoned (SAJ) fairing panels that will encapsulate the Artemis II Service Module during launch are also being prepared for eventual shipment to KSC. “For Michoud, the Crew Module is kind of the gateway part for a particular vehicle, so [the] Artemis 4 [crew module pressure vessel] is here first and then it’ll get shipped down to Kennedy and then typically speaking, the SAJ fairing panels are the last thing that go down to Kennedy for a particular vehicle,” Livingston explained. 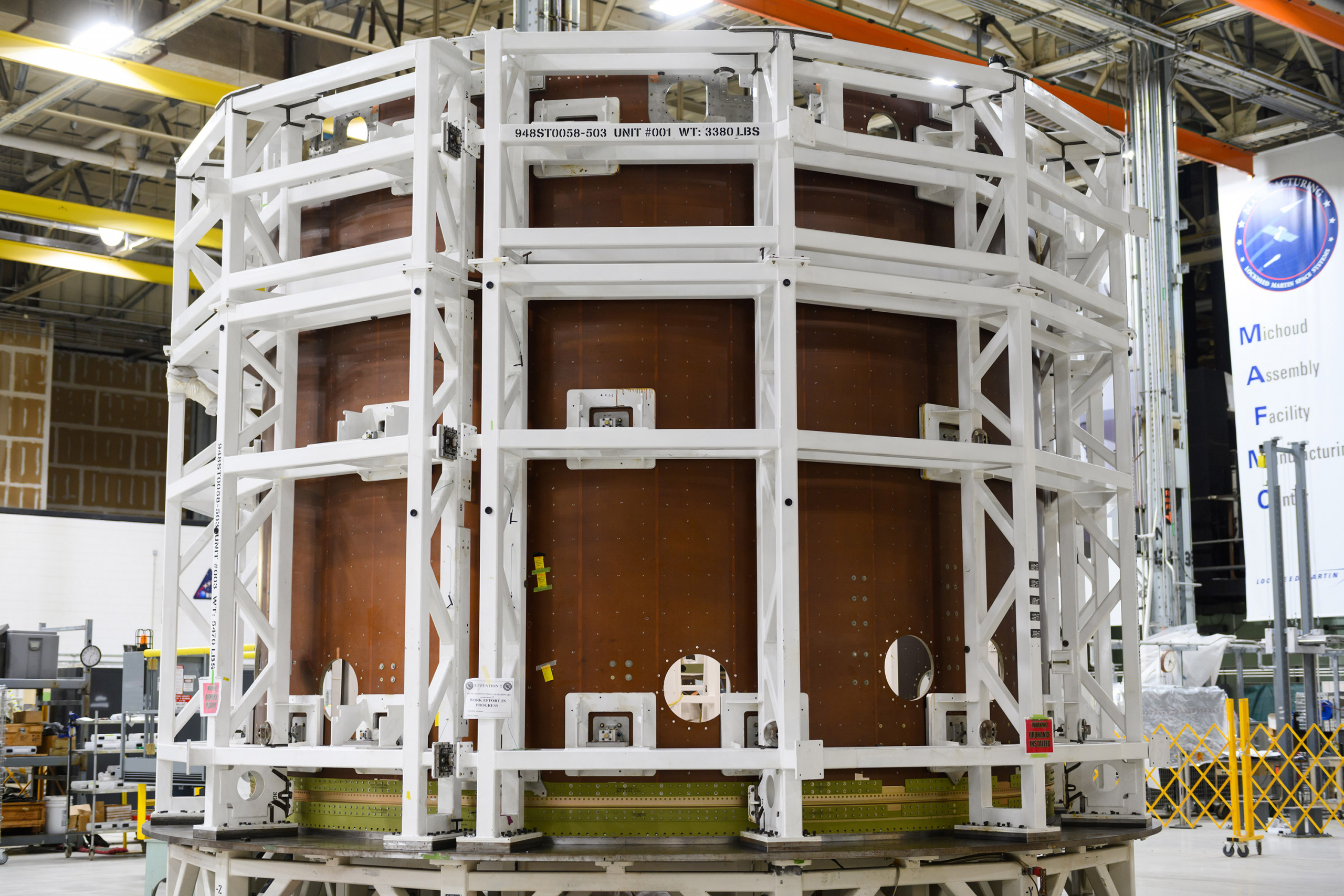 The SAJ panels are integrated with hardware for the frangible joints at Michoud, but they are still inert. “We just match drill them as if they were going to be installed, and then we disassemble and ship the panels such that they can be reassembled down at Kennedy,” said Livingston.

The frangible joints are later energized when they are at Kennedy Space Center.

Featured image: The backbone assembly of the Orion pressure vessel for Artemis 4 is seen inside the Michoud Assembly Facility. Credit: NASA/Eric Bordelon.

The post Work on Orion capsules continue as Artemis I prepares to launch appeared first on newsastronomy.com.