News Astronomy > News > Will Europa finally answer, ‘Are we alone?’

While NASA’s much-lauded Space Launch System stands ready for its maiden flight later this month with the goal of sending astronauts back to the Moon in the next few years, our gazes once again turn to the stars as we continue to ask the question that has plagued humankind since time immemorial: Are we alone? While there are several solar system locales that we can choose from to conduct our search for life beyond Earth, to include Mars and Saturn’s moons, Titan and Enceladus, one planetary body orbiting the largest planet in the solar system has peaked the interest of scientists since the 1970s.

Jupiter’s second Galilean Moon, Europa, with its interior ocean, predominantly crater-less surface, and crisscrosses of cracks and ridges spanning entire hemispheres, makes it one of the most fascinating planetary bodies ever observed. These unique geologic features are possibly indicative of liquid water traveling to the surface from its deep ocean, making Europa a hot spot for the exploration and study of life beyond Earth, also known as astrobiology. 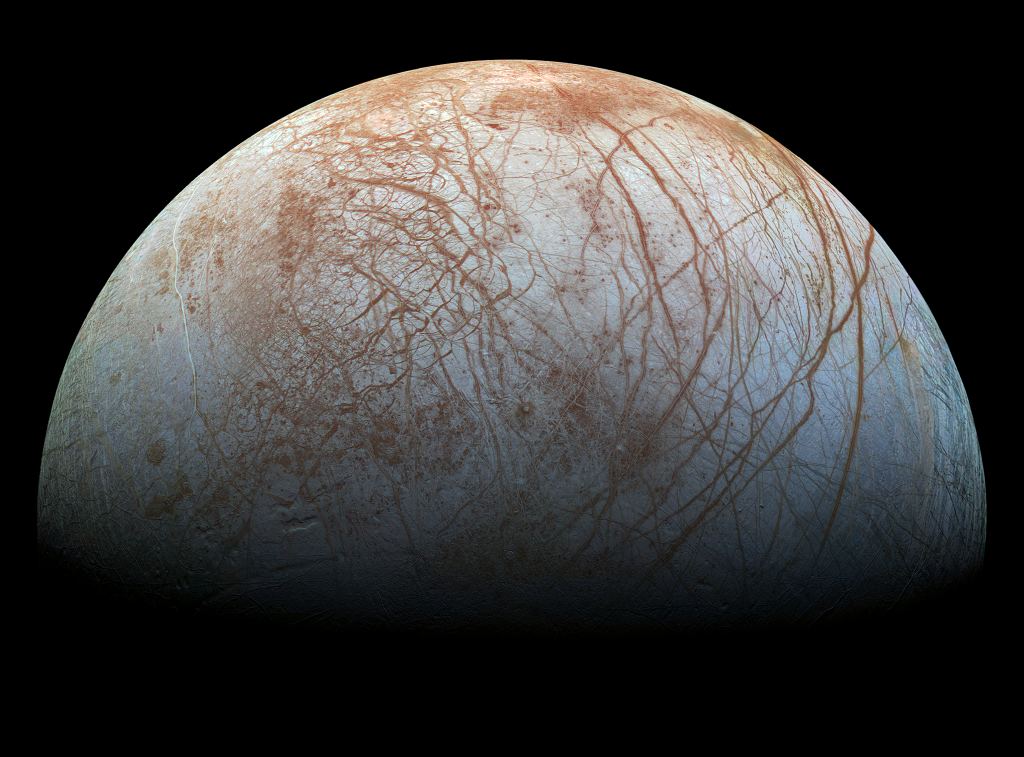 “Europa may be one of the few accessible places whether life could originate and persist,” says Dr. Michael Manga, a geophysicist and Professor in the Department of Earth and Planetary Science at UC Berkeley. “Its evolution and dynamics are fascinating, some similarities but also fundamental differences from Earth.”

Scientists hypothesize that Europa’s icy outer shell is 15 to 25 kilometers (10 to 15 miles) thick that floats on an ocean 60 to 150 kilometers (40 to 100 miles) deep. While there is strong evidence that Saturn’s moon, Enceladus, also has a interior ocean, Europa’s ocean is believed to potentially house double the amount of water as all of Earth’s oceans combined, despite Europa being only a quarter of Earth’s diameter.

“Europa’s surface composition and some of its geologic features suggest that ocean water somehow moves through the shell and reaches the surface,” says Dr. Alyssa Rhoden, who is a Principal Scientist within the Planetary Science Directorate at the Southwest Research Institute (SwRI) in Boulder, Colorado. “If that is true, it means that nutrients and energy can cycle between the ocean, ice shell, and surface, and that can be beneficial for life.” 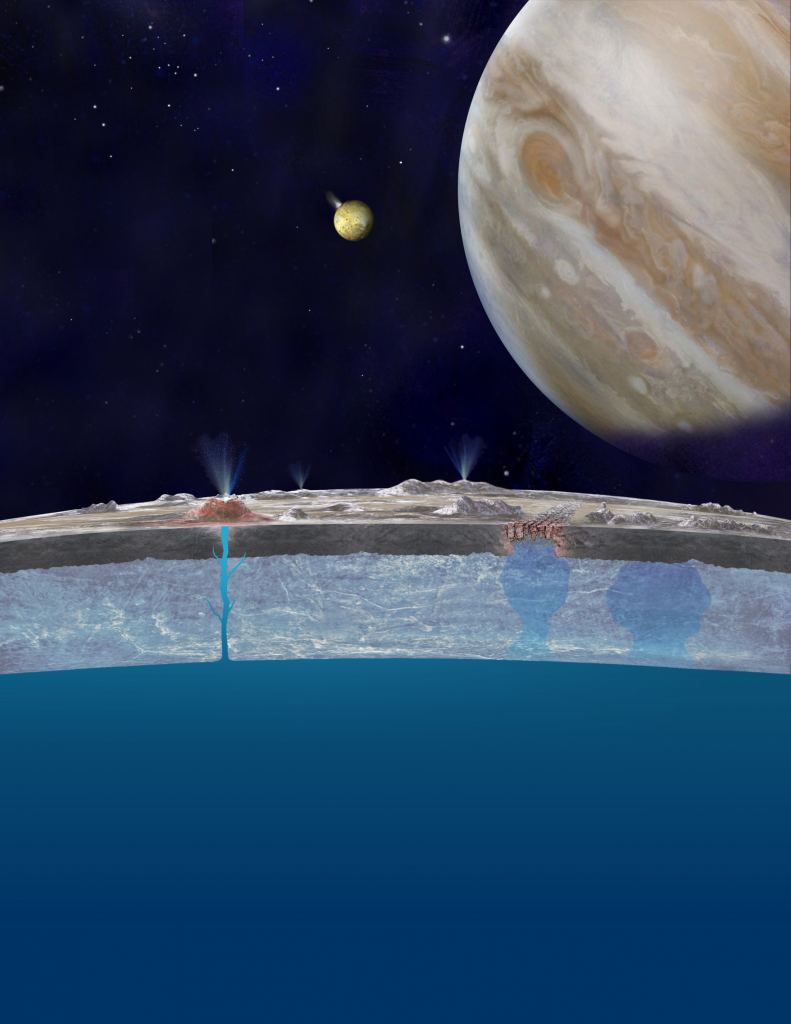 There is already evidence that this liquid water has made it to the surface in the form of what is known as “chaos terrain”, which is highly disrupted topography where blocks of ice have broken off, shifted, and then refroze to the surface due to the lack of atmosphere and being exposed directly to the vacuum of space. One example of chaos terrain on Europa is Conamara Chaos, which was imaged by NASA’s Galileo spacecraft and later reconstructed to show what it looked like before the surface disruption took place. 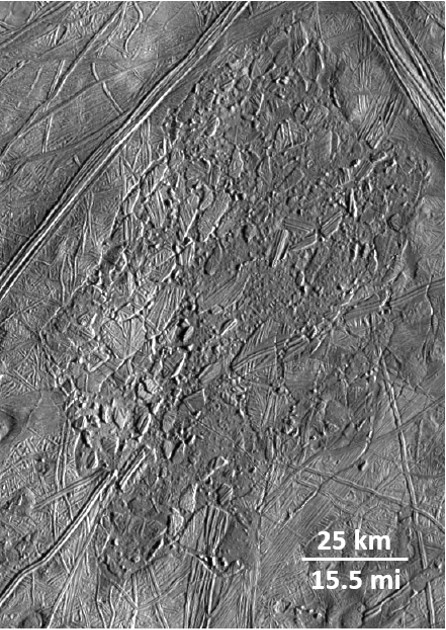 Europa’s vast ocean swirls beneath its icy crust despite the moon’s incredible distance from the Sun, putting it well beyond our star’s habitable zone, which is the sweet spot where liquid water can exist on a planet’s surface. Instead, this ocean exists from what is known as tidal heating, or the constant stretching and compressing the small moon endures as it orbits the much more massive Jupiter throughout its elliptical orbit. Along with Jupiter, Europa is also being constantly tugged by Jupiter’s moons, Io and Ganymede, the first and third Galilean satellites, respectively. This tidal heating leads to friction within Europa’s core, corresponding to heat and ultimately melting the inner ice into what is now Europa’s massive ocean.

“I find Europa captivating because its geology, interior, and orbit are all connected through the process of tides,” says Dr. Rhoden. “Europa’s gravitational relationship with Jupiter, and its neighboring moons, are responsible for creating this complex, active world. Each aspect you study is connected to the others, so there are a lot of ways to investigate the processes at work and a lot to get curious about.”

While Europa has been studied in-depth with past space missions, most notably NASA’s Galileo mission of the 1990s and early 2000s, NASA’s upcoming Europa Clipper mission proves to be a gamechanger in terms of our understanding of this fantastic icy moon, slated to launch in late 2024 with orbital insertion around Jupiter being accomplished in early 2030. The primary goal of Clipper is to ascertain the habitability potential for locations below the icy surface while making almost 50 extremely close flybys of the icy moon, some as low as 25 kilometers (16 miles).

“I started researching Europa 22 years ago, and I’ve had the same images to work with the entire time,” says Dr. Rhoden. “So, I would say I am EXTREMELY excited for the new data sets that will be delivered by Clipper. As for habitability, there are probably many ways it will inform habitability, but what I am most interested to see is evidence of liquid water within the ice shell.” 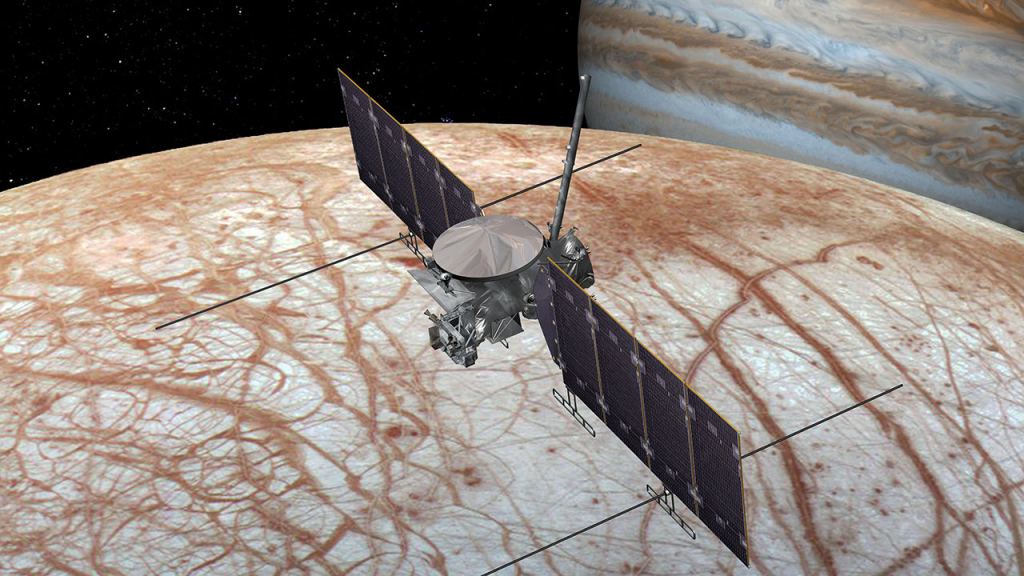 Given how water is the reason why life thrives here on Earth, what kinds of life could we find traversing Europa’s interior ocean? While Dr. Rhoden jokingly says, “Space whales, obviously”, Dr. Manga is less optimistic, saying a gut feeling tells him there’s no life, but concludes by saying that it will take samples collected from a lander to know for sure.

Will Europa and its vast ocean finally answer the longstanding questions of whether we are alone in the universe? Only time will tell, and this is why we science!

The post Will Europa finally answer, ‘Are we alone?’ appeared first on newsastronomy.com.