Betelgeuse, the big reddish star that is the second brightest point in the constellation Orion (after Rigel), has been puzzling astronomers for years. Starting in October 2019, Belegeuse began to dim considerably, eventually reaching 1/3rd of its normal brightness a few months later. And then, just as mysteriously, it began to brighten again and (as of February 2022) has remained in a normal brightness range. The most likely reason appeared to be a circumstellar dust cloud rather than any changes in the star’s intrinsic brightness.

Using data from NASA’s Hubble Space Telescope (HST) and several other observatories, astronomers have concluded that a Surface Mass Ejection (SME) was the culprit. This event occurred in 2019 when Betelgeuse released a substantial mass of material that cooled to form a circumsolar dust ring, obscuring the star. In contrast to what regularly happens with our Sun during a Coronal Mass Ejections (CME), Betelgeuse ejected roughly 400 billion times as much mass as a typical CME. This is the first time something of this nature has been seen in a normal star’s behavior.

One of the largest and brightest stars in the sky, Betelgeuse is easily found in the night sky by looking to Orion’s right “shoulder.” This Red Supergiant is what happens when stars are no longer in their main sequence phase and expand to become significantly larger. If it were located in our Solar System, Betelgeuse would swallow up Mercury to Mars, and its outer surface would extend past the orbit of Jupiter. The star is also known as a semiregular variable star, meaning that it varies in brightness over time but in a way that is subject to cycles and predictable. 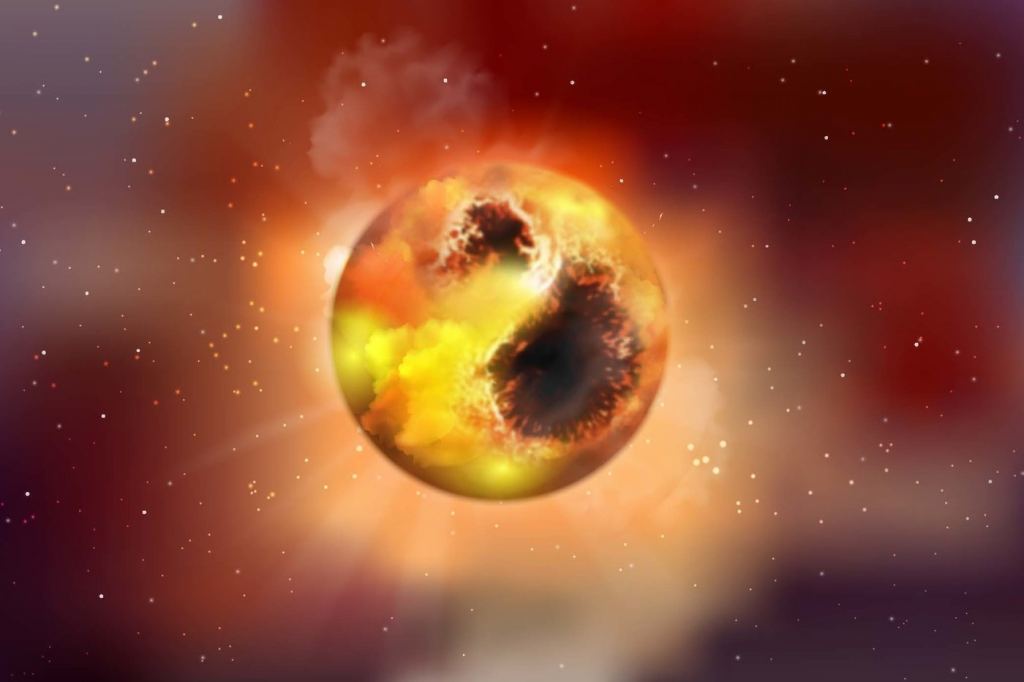 An artist’s impression of Betelgeuse. Its surface is covered by large star spots, which reduce its brightness. During their pulsations, such stars regularly release gas into their surroundings that condenses into dust. Credit: MPIA graphics department

Because of its prominence in the night sky, Betelgeuse’s dimming was easily noticeable by backyard observers using small telescopes, binoculars, and even the naked eye. To determine the exact cause, Andrea Dupree – an astronomer at the Harvard & Smithsonian Center for Astrophysics (CfA) – and her colleagues relied on the observations from the venerable Hubble. In 1996, Dupree and Ronald L. Gilliland of the Space Telescope Science Institute (STScI) used Hubble to observe hot spots on the surface of Betelgeuse, which constituted the first direct image of a star other than the Sun.

This time, Dupree and her colleagues combined Hubble observations with imaging and spectroscopic data from other instruments to fully understand Betelgeuse’s behavior before, during, and after the event. This included data from the STELLA robotic observatory, the Fred L. Whipple Observatory’s Tillinghast Reflector Echelle Spectrograph (TRES), NASA’s Solar Terrestrial Relations Observatory spacecraft (STEREO-A), and the American Association of Variable Star Observers (AAVSO). These observations revealed that in 2019, Beteleguese “blew its stack” and released a tremendous amount of material into space.

Like a CME, this massive ejection was likely caused by a buoyant jet of superheated material bubbling up from deep inside the star (aka. a convective plume). This plume is estimated to have been measured more than a million kilometers across and several times as mass as our Moon. So great were the shocks and pulsations that it was enough to blast off a sizeable patch of material from Betelgeuse’s outer shell (photosphere). Once released, this material would have created a large cool patch on Betelgeuse’s surface beneath it and cooled to form a large cloud of obscuring dust.

What’s more, the shock caused by this event is something Betelgeuse still hasn’t fully recovered from. The supergiant’s 400-day pulsation rate is now gone (perhaps temporarily), something astronomers have not seen in almost 200 years of observations. The sudden disappearance of this variability in brightness and surface motions is further evidence of how disruptive this blowout was. As Dupree explained in a recent NASA press release:

“Betelgeuse continues doing some very unusual things right now; the interior is sort of bouncing. We’ve never before seen a huge mass ejection of the surface of a star. We are left with something going on that we don’t completely understand. It’s a totally new phenomenon that we can observe directly and resolve surface details with Hubble. We’re watching stellar evolution in real-time.”

This illustration plots changes in the brightness of the red supergiant star Betelgeuse, following the titanic mass ejection of a large piece of its visible surface. Credits: NASA/ESA/Elizabeth Wheatley (STScI)

These observations could yield fresh clues about how red stars lose mass late in their lives as their nuclear fuel is slowly exhausted, eventually culminating in a supernova. How much mass they shed as they near the end of their Red Giant phase would have a significant effect on their fate. In addition, the way this event completely dwarfs ejections from the Sun’s corona could suggest that SMEs and CMEs are separate classes of stellar events. The good news is that despite Betelgeuse’s recent behavior, there’s no reason to suspect it may go supernova anytime soon.

According to spectra obtained by TRES and Hubble, Betelgeuse’s outer layers have returned to normal, even though the surface still shows signs of buoyant activity as the photosphere rebuilds itself. Dupree and her colleagues suggest that the star’s interior convection cells (beneath the photosphere) may be sloshing around like an unbalanced washing machine. Future observations could also be conducted using the James Webb Space Telescope (JWST), which will be able to detect the ejected material using its advanced infrared optics.

These observations could reveal more about the ejected material as it continues to move away from Betelgeuse and provide additional clues as to why the event happened. Who knows? Knowing what differentiates SMEs from CMEs and the damage they can inflict could go a long way towards ensuring “planetary defense.”

The post Why Betelgeuse Dimmed appeared first on newsastronomy.com.