News Astronomy > News > When Stars eat Their Planets, the Carnage can be Seen Billions of Years Later

The vast majority of stars have planets. We know that from observations of exoplanetary systems. We also know some stars don’t have planets, and perhaps they never had planets. This raises an interesting question. Suppose we see an old star that has no planets. How do we know if ever did? Maybe the star lost its planets during a close approach by another star, or maybe the planets spiraled inward and were consumed like Chronos eating his children. How could we possibly tell? A recent study on the arXiv answers half that question.

It all comes down to an odd little element known as lithium.

Lithium is the third element on the periodic table. Although most of the atoms formed during the big bang were hydrogen and helium, trace amounts of lithium were formed from the big bang. About one atom in ten billion so the current model goes. But it turns out there is less lithium in the universe than you’d expect. That’s because while other elements such as carbon, oxygen, and iron are created in the hearts of large stars, lithium is destroyed. It’s an effect known as lithium burning, and it means older stars typically don’t have much lithium present in their atmosphere.

Astronomers use this effect to distinguish between high-mass brown dwarfs and low-mass stars. If there is plenty of lithium present in the atmosphere, then fusion isn’t happening, and it’s a brown dwarf. Not much lithium and you have a star. But some stars have atmospheric lithium. They are clearly large enough and hot enough to undergo fusion, and they haven’t burned lithium out of their atmosphere. So what gives? 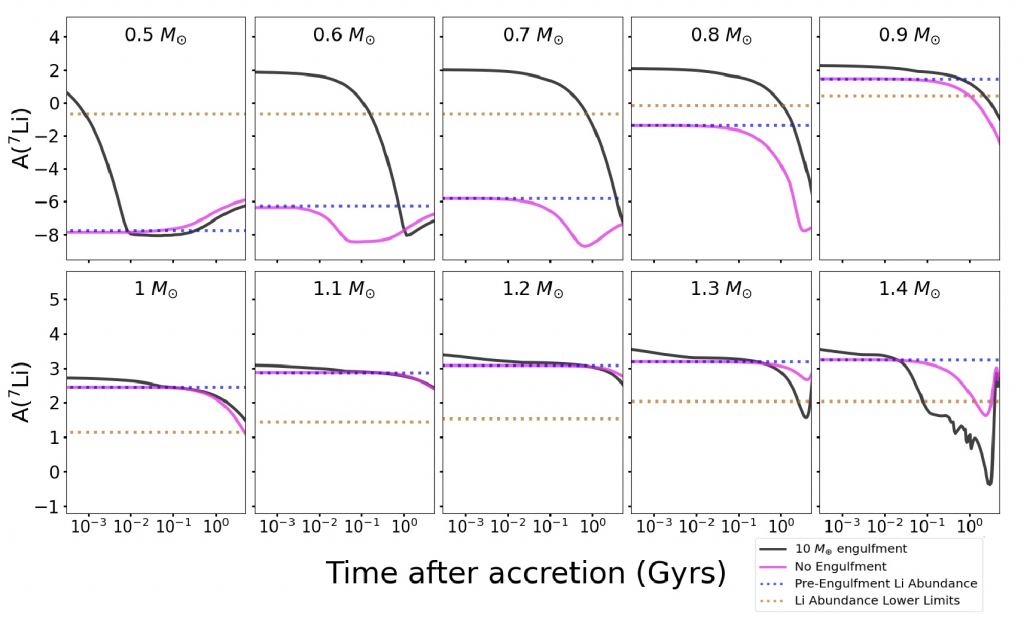 Modeled abundances for a star that consumes a planet vs one that does not. Credit: Savilla, J., et al

The common hypothesis has been that these unusual stars must undergo some unusual internal mixing that somehow prevents lithium from being cycled into the star’s interior where it can be consumed. This latest study proposes an alternative. Perhaps these stars happened to consume their young planets instead.

Since planets don’t burn lithium when a planet is eaten by a star its lithium is added into the star’s mix. The team simulated how that added lithium would behave in a star’s interior, and how long it would take to fade from the star’s upper layers. They found that smaller red dwarf stars are fairly effective in burning the new lithium. Because a small star has large convection zones that mix its interior really well, within a few hundred million years the new lithium is depleted. But for larger, more Sun-like stars, lithium can hang around for billions of years. Long after a planet is consumed, its lithium is still present in the stellar atmosphere.

So if we see an old Sun-like star with lithium in its atmosphere, it’s quite possible it once had planets. Stellar lithium seems to be a good sign of a sated star after a planetary meal.

The post When Stars eat Their Planets, the Carnage can be Seen Billions of Years Later appeared first on newsastronomy.com.