News Astronomy > News > When did the Sun Blow Away the Solar Nebula?

The story of our solar system’s origin is pretty well known. It goes like this: the Sun began as a protostar in its “solar nebula” over 4.5 billion years ago. Over the course of several million years, the planets emerged from this nebula and it dissipated away. Of course, the devil is in the details. For example, exactly how long did the protoplanetary disk that gave birth to the planets last? A recent paper submitted to the Journal of Geophysical Research takes a closer look at the planetary birth crèche. In particular, it shows how the magnetism of meteorites helps tell the story.

About That Solar Nebula

Some 5 billion years ago, our neighborhood of the galaxy was a nebula made of hydrogen gas and some dust. That provided the seeds of what became our solar system. Somehow, a part of this molecular cloud began to clump on itself. Maybe a passing star sent shock waves and ripples through the dust and caused it to compress. Or, maybe a nearby supernova did the deed. Whatever happened, it started the birth process of the protostar which eventually became the Sun. 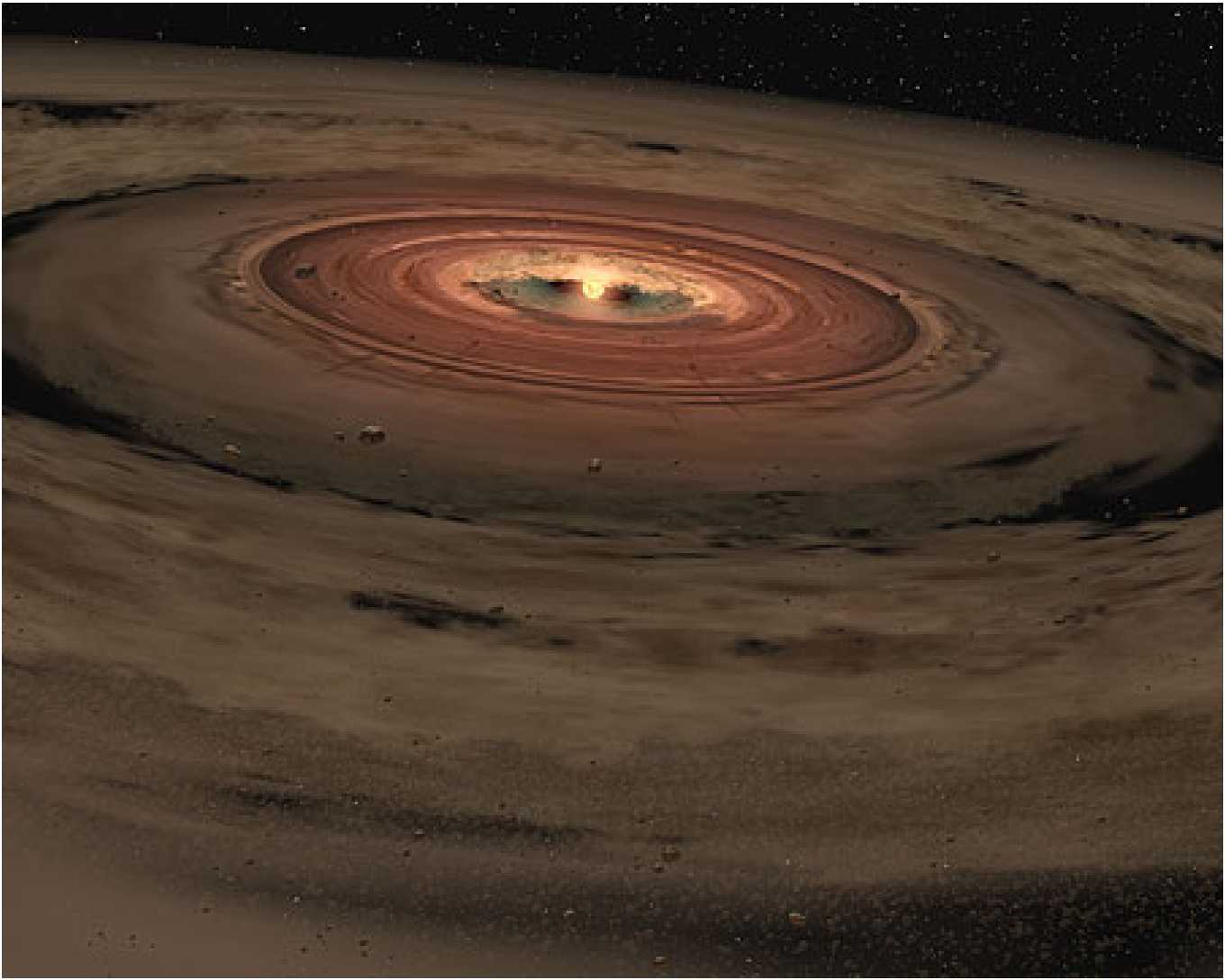 During its birth process, the infant Sun in its birth crêche went through what’s called the T Tauri phase. It blew extremely hot winds filled with protons and neutral helium atoms out to space. At the same time, some of the material was still falling onto the star.

While all that was happening, the cloud was in motion and flattening out like a pancake. Think of it like an accretion disk feeding material into the center where the star was forming. Not only was it filled with the seeds of planets, but it was also threaded with a magnetic field. This active disk is where the planets formed. They started out as clumps of dust, which stuck to each other to become pebble-sized rocks. Those rocks crashed together to form larger and larger conglomerations called planetesimals. Those, in turn, collide and form planets. That’s the executive summary of solar system formation. But, to get more details, scientists have to dig a bit more.

Studying Rocks from the Solar Nebula

Once the planets were born, what happened to the rest of the nebula? In 2017, planetary scientist Huapei Wang and collaborators reported on their studies of meteorites dating back to that time. They found that the solar nebula had cleared by about four million years after solar system formation.

A team of scientists, led by Cauê S. Borlina of Johns Hopkins University and MIT, wondered if the system cleared out all at once. Or, did it happen over two separate timescales? To answer that, the team turned to a characteristic called “solar nebula paleomagnetism”. That’s a fancy way of saying that there was a magnetic field in the nebula. Meteoroids formed in the nebula at that time (called carbonaceous chondrites) contain imprints of that field. Borlina and the team speculated that there was one timetable for the inner solar system and one for the outer regions. But, how to find out for sure what that timetable was? Those magnetic field imprints held some clues.

The rocks that formed in the nebula should show a magnetic imprint reflecting the magnetic fields at the time. Those formed after the nebula cleared wouldn’t show much (or any) magnetic fingerprint. They would record the magnetism (or lack of it) of that time and place.

Borlina’s team studied meteorites found in Antarctica in late 1977/78 and 2008. Those rocks are made of a primordial material called “carbonaceous chondrite” that formed early in solar system history. The team focused on magnetite (an iron oxide mineral) found in each sample. Magnetite “records” what’s called “remanent magnetization” imposed by the presence of the local field. Then, they compared to other paleomagnetic studies of certain rocks called “angrites” that were not magnetized. Presumably, these formed after the solar nebula (and its intrinsic magnetic fields) had dissipated.

That squares with the earlier estimate of around 4 million years for the complete sweep. The next step will be to get more precise ages from meteorites in general. That should help scientists put some more definite constraints on the actual dissipation timeline. In particular, the team wants to conduct more experimental work on magnetite samples in different families of these chondrites. That will let them figure out exactly when the rocks acquired the imprints of magnetic fields.

Implications for Other Solar Systems

The idea of using rocks to “date” the solar nebula and its dissipation has implications for protoplanetary disks around other stars. It suggests that most such disks go through a two-timescale evolution. Couple that with earlier work showing that protoplanetary disks have substructures, and we now have more insight into the chaotic conditions shortly after the birth of our Sun and planets.

Lifetime of the Outer Solar System Nebula From Carbonaceous Chondrites

The post When did the Sun Blow Away the Solar Nebula? appeared first on newsastronomy.com.