The success of the Mars Ingenuity helicopter has encouraged engineers to consider and reconsider all options for remote aerial observations of the Red Planet.  Additional methods for birds-eye views of Mars would not only provide higher resolution data on the landscapes where rovers can’t go — such as canyons and volcanoes — but also could include studying atmospheric and climate processes that current orbiters and rovers aren’t outfitted to observe.

“You have this really important, critical piece in this planetary boundary layer, like in the first few kilometers above the ground,” said Alexandre Kling, a research scientist in NASA’s Mars Climate Modeling Center, in a press release. “This is where all the exchanges between the surface and atmosphere happen. This is where the dust is picked up and sent into the atmosphere, where trace gases are mixed, where the modulation of large-scale winds by mountain-valley flows happen. And we just don’t have very much data about it.” 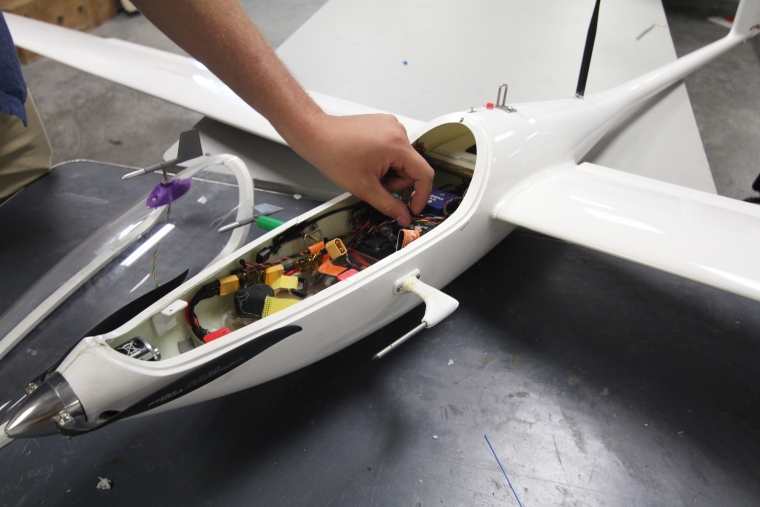 The Mars sailplanes will contain a custom-designed array of navigation sensors, as well as a camera and temperature and gas sensors to gather information about the Martian atmosphere and landscape.Emily Dieckman/College of Engineering

One concept that Kling is working on with students at the University of Arizona is a motorless sailplane. In the team’s paper, published in the journal Aerospace, they note that unpowered sailplanes “mitigate the weight and energy storage limitations traditionally associated with powered flight by instead exploiting atmospheric wind gradients for dynamic soaring.”

Because they would be without a propulsion system, they would be lightweight and compact enough to be packaged into CubeSats and deployed as secondary payloads at a relatively low cost. The sail planes would either unfold, like origami, or inflate, like high-tech inflatable paddleboards that rigidize at full size. Another option would be a rapid deployment during Entry, Descent, and Landing (EDL) of a Mars Science Laboratory-class (MSL) vehicle.

The students have designed a sailplane that has a wingspan of about 11 feet (3.3 meters) and weighs about 11 pounds (5 kg). It would be capable of carrying an array of navigation sensors, as well as a camera and temperature and gas sensors to gather information about the Martian atmosphere and landscape.

One idea for the mission is to have a balloon or blimp carry the sailplanes into the atmosphere and then release them. Then, as a sailplane, it would take advantage of thermal updrafts for static soaring. Even better would be dynamic soaring, which is flying technique used by radio-controlled gliders and sometimes even human-carrying gliders where the vehicle can gain energy by repeatedly crossing the boundary between air masses of different velocities. Additionally, on Mars, wind speed often increases with altitude, which would help carry the sailplane long distances. 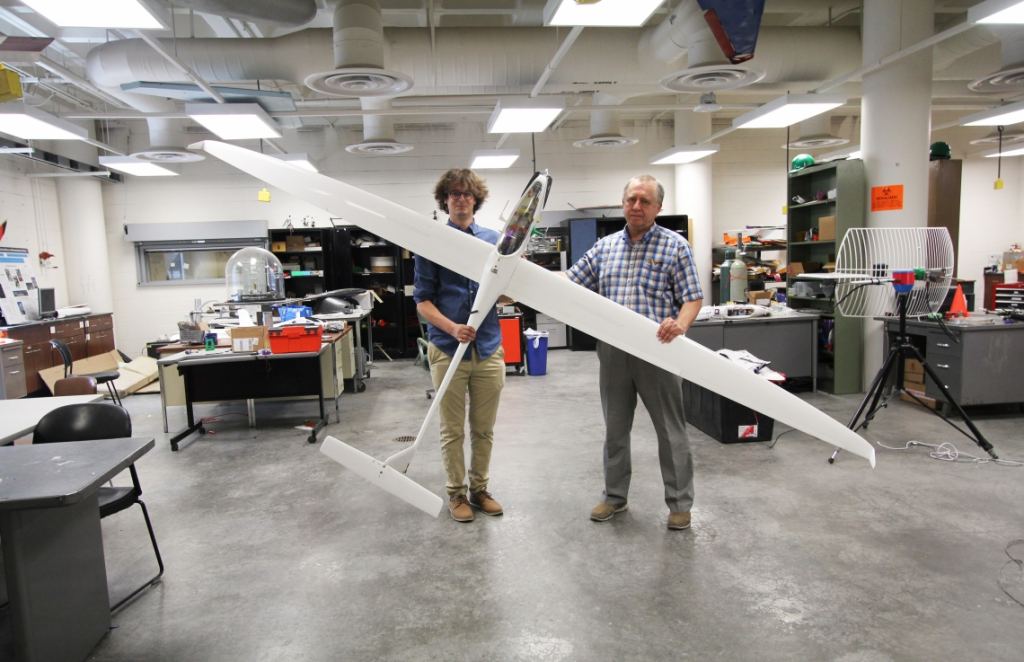 In their paper, the team said they’ve used equations of motion for the sailplanes combined with wind profiles from a computer program that simulates the circulations of the Martian atmosphere at regional and local scales, called the Mars Regional Atmospheric Modeling System (MRAMS). They conducted studies for two representative sites: Jezero crater, Perseverance’s landing site, and over a section of the Valles Marineris canyon.

“Numerical results for complete dynamic soaring cycles demonstrated that the total sailplane energy at the end of a soaring cycle increases by 6.8–11%,” the team wrote. They estimate that the sailplanes can continually harvest energy from the atmosphere, flying for hours or even days at a time.

“It’s almost something you have to see it to believe,” said paper co-author Jekan Thanga, a UArizona associate professor of aerospace and mechanical engineering. 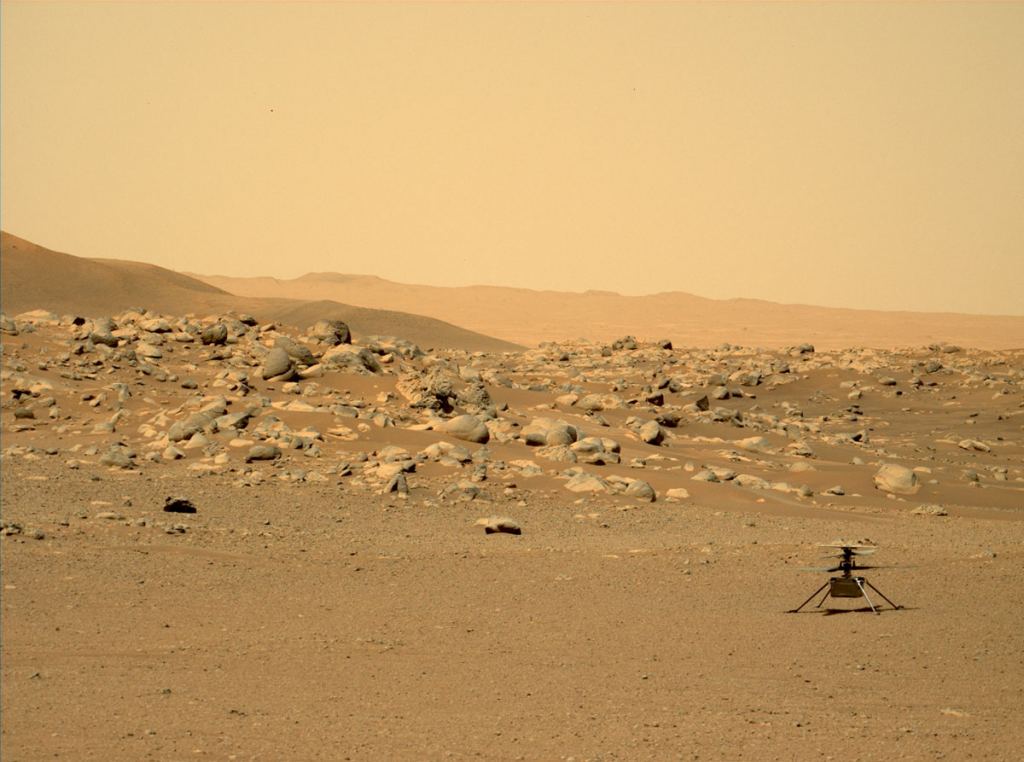 This image of NASA’s Ingenuity Mars Helicopter was taken by the Mastcam-Z instrument of the Perseverance rover on June 15, 2021, the 114th Martian day, or sol, of the mission. The location, “Airfield D” (the fourth airfield), is just east of the “Séítah” geologic unit. Credits: NASA/JPL-Caltech/ASU/MSSS.

The Ingenuity helicopter landed with the Perseverance rover in February 2021 and weighs just 4 pounds (1.8 kg).  With miniaturized flight technology and a rotor system span of about 4 feet, it’s the first device to test powered, controlled flight on another planet. As of this writing, it has made 29 successful flights, even though it was originally planned to conduct just a handful of flight. However, the solar-powered vehicle can fly for only three minutes at a time, and it reaches heights of just 12 meters, or about 39 feet.

“These other technologies have all been very limited by energy,” said the paper’s first author, Adrien Bouskela, an aerospace engineering doctoral student in UArizona professor Sergey Shkarayev’s Micro Air Vehicles Laboratory. “What we’re proposing is just using the energy in situ. It’s kind of a leap forward in those methods of extending missions. Because the main question is: How can you fly for free? How can you use the wind that’s there, the thermal dynamics that are there, to avoid using solar panels and relying on batteries that need to be recharged?”

The University of Arizona said the team ultimately hopes NASA will fund the mission and allow it to “catch a ride” on a large-scale Mars mission already in development. The low-cost nature of the sailplane effort means it could come to fruition relatively quickly, Kling said, perhaps in years rather than the decades needed for a full-scale mission.

The post We've Seen a Helicopter on Mars. Next, Sailplanes? appeared first on newsastronomy.com.