News Astronomy > News > We’ll be Building Self-Replicating Probes to Explore the Milky Way Sooner Than you Think. Why Haven’t ETIs?

The future can arrive in sudden bursts. What seems a long way off can suddenly jump into view, especially when technology is involved. That might be true of self-replicating machines. Will we combine 3D printing with in-situ resource utilization to build self-replicating space probes?

One aerospace engineer with expertise in space robotics thinks it could happen sooner rather than later. And that has implications for SETI.

Alex Ellery is a Professor of Mechanical and Aerospace Engineering at Carleton University in Ottawa, Canada. Ellery is the author and co-author of many papers and articles on topics like 3D printing, in-situ resource utilization, self-replicating machines, and robotic exploration.

Ellery has published a new article on Cambridge Core titled “Self-replicating probes are imminent – implications for SETI.” In it, he talks about advances in 3D printing, self-replication, and robotics and says that we’re already building self-replicating machines, though they have their limitations. He also says that if we’re developing them, then ETIs—if any exist—should’ve developed them, too. He argues that SETI might be better focused on finding evidence of probes rather than scanning the sky for radio signals.

Ellery writes about a whole host of concepts familiar to newsastronomy.com readers, for example, biomimicry and asteroid mining. He says that biomimicry can play an important role in self-replicating space probes dedicated to asteroid mining. “Self-replicating probes are an example of TRIZ (Teorija Reshenija Izobretatel’skih Zadach), a theory of inventive problem solving that matches biomimetic solutions to technological problems,” he writes.

We’re reasonably certain that other solar systems have asteroid belts. In our Solar System, asteroid mining is expected to be a big part of our expansion into space. So self-replicating interstellar probes will likely rely on asteroids for raw materials. But there are some problems associated with that, and biomimicry could provide a solution.

Ellery explains that one of the main problems in asteroid mining is the microgravity environment. A machine’s mass isn’t enough to keep it attached to an asteroid. He suggests that the wood-boring drill and ovipositor of the wood wasp could be a solution by providing a way for a machine to anchor itself to an asteroid. “It employs two longitudinal sections that penetrate through a dual-reciprocating mechanism – the two segments of the drill stem alternate between anchorage and penetration, the anchored segment providing traction for the percussive digging segment,” he writes. Scientists have already developed a surgical tool based on the wasp’s drill and ovipositor, so the ovipositor could inspire a similar solution in asteroid mining.

Most of us don’t pay much attention to advanced 3D printing. But researchers are constantly pushing the envelope of 3D printing and additive manufacturing (AM), and Ellery has a robust opinion of 3DP and AM when it comes to self-replicating probes. The technology is constantly progressing, and Ellery talks about some of the advances.

In his article, Ellery presents several examples of 3D printing that might come as a surprise. One of them is an electric motor.

This image from the article shows some electric motors. In the left panel, a 3D-printed electric motor (l) sits next to an off-the-shelf electric motor (r.) The right panel shows the 3D printed DC motor with wound coils. Additive manufacturing (AM) is also part of the process. Image Credit: Alex Ellery.

Ellery and his colleague Abdurrazag Elaskri created a 3D-printed electrical motor in 2020 and published a paper about it. They used additive manufacturing to make the iron core, winding, insulation, and permanent magnet. Self-replicating probes in the future will make use of both 3D printing and additive manufacturing. The distinction between the two will likely disappear.

There’s still a long way to go to get from an electric motor to a self-replicating probe, but this is definitely progress. “We have 3D-printed electric motors which can be potentially leveraged from extraterrestrial material that should be available in every star system,” Ellery writes.

Ellery also writes about light sails, something that regular newsastronomy.com readers are familiar with. A light sail, or solar sail, uses large mirrors to catch the radiation pressure from a star in the same way a sailboat catches the wind with its sails. Johannes Kepler first talked about the idea way back in 1610 in a letter to Galileo. Now light sails have been successfully tested on demonstration spacecraft.

Will light sails be part of self-replicating probes in the future? 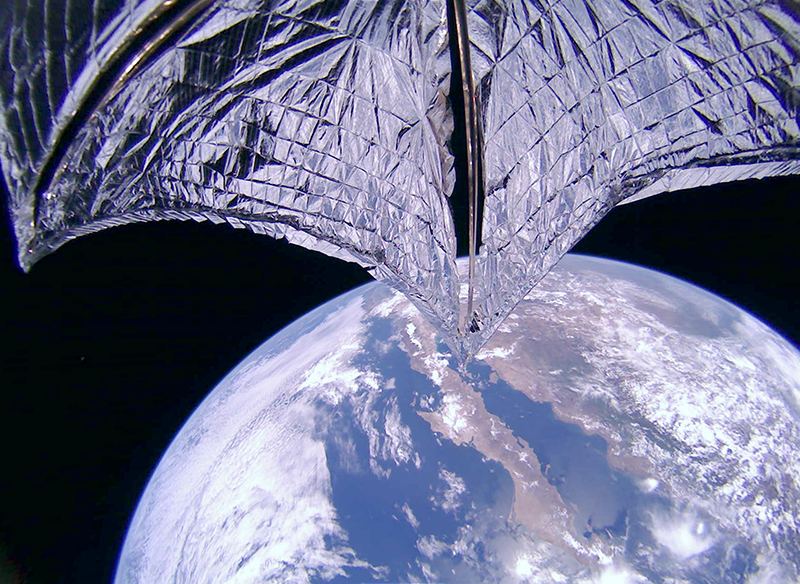 Light sails are thin films of Mylar/Kapton with a reflective coating of aluminum applied. Ellery says that rather than Mylar/Kapton, light sails built by self-replicating machines could be made of silicone elastomer. Silicon is the second most abundant element in Earth’s crust and is also widely present in asteroids. And aluminum is widely present in the mineral anorthite, which is also available in asteroids.

Light sails could be manufactured by self-replicating probes, according to Ellery, though there are still some obstacles. “Large sails can be assembled from smaller sail modules for ease of manufacture and handling – it is unclear if 3D printing can be implemented with extremely thin layers, but we have demonstrated the viability of the deposition of aluminum onto silicone plastic,” he writes.

This process is tricky, and Ellery and his colleagues have made important progress. “Multimaterial 3D printing to incorporate plastics, metals and ceramics: we have demonstrated the principle of using molten aluminum alloy with silicone plastics simultaneously, which is a major step towards 3D printing metal/plastic in integrated components – indeed, this is precisely what is required in printing electronics and solar sails.” 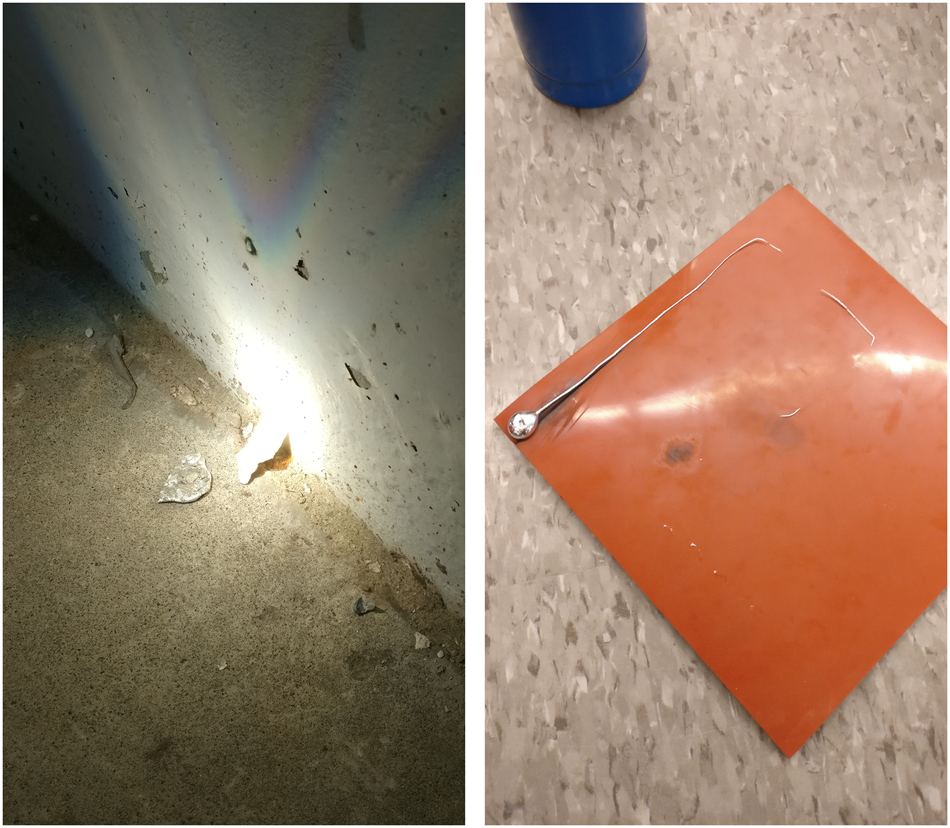 Light sails also rely on lightweight yet strong supports. There are different ways to provide the support and the unfurling mechanism the sails require, but Ellery is confident that future self-replicating probes will be able to manufacture them. Modularity is key, he says. “The interstellar sail is a structure of magnitude, but there is no physical reason why it cannot be constructed by leveraging the production capacity of self-replicating machines, which can exponentially achieve scale from a population of modules.”

The idea of a universal self-replicating machine sits at the center of the article. Ellery describes how they could reproduce and spread throughout a galaxy, taking advantage of widespread resources. “Asteroids offer the gamut of raw materials for feeding the self-replicating machine – metals, ceramics, volatiles (presumed to be similar in nature as lunar volatiles), reagents and feedstock for plastics,” he writes. “The entire Galaxy could be colonized within 24 generations (yielding a population of 424 billion) assuming two offspring per generation,” he explains. 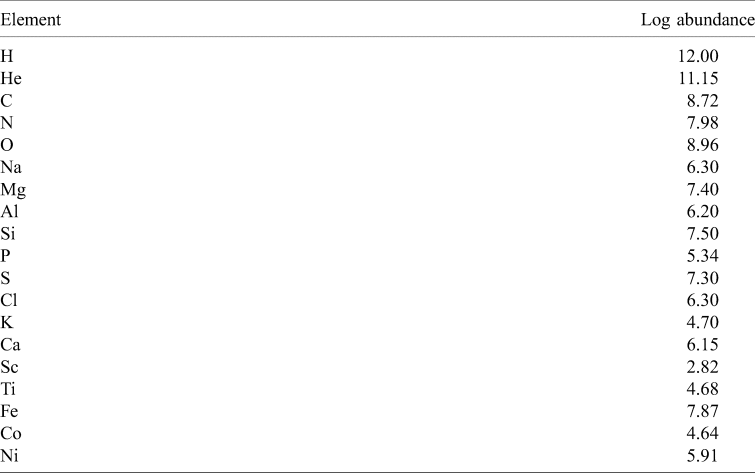 This figure from the study shows the elemental abundance in our Solar System. While other systems will differ, there’ll be broad similarities between solar systems with stars of the same population. Image Credit: Ringwood, 1966.

And if we’re close to doing it, at least in civilizational time scales, wouldn’t ETIs have done it, too? “This suggests that if we apply the Copernican principle, ETI, if they exist, should have developed self-replicating probes,” he claims.

Some thinkers point out that there are risks to developing self-replicating machines. Advanced AI used in the machines could eventually become difficult to live with or impossible to control. It’s a well-explored trope in science fiction.

But Ellery says that the usefulness of self-replicating machines outweighs the concerns. “The sheer utility of self-replication technology marginalizes the notion that ETI will not develop this technology for fear of its potential dangers,” he states.

If ETIs are using this technology, that leads us to the second main point he’s making in his article: SETI should try to detect technosignatures related to self-replicating probes active in asteroid belts of other solar systems. If ETIs exist, he argues, then they’ve already developed self-replicating probes and may have passed through our Solar System already. And if they did, there should be evidence.

The Asteroid Belt is a prime target for the resources necessary for self-replicating space probes. Scientists think that most solar systems have asteroid belts. Credit: NASA/JPL-Caltech

We have uncovered any evidence yet. But we’re nowhere near an exhaustive search. The Moon is the only body in the Solar System that has been imaged in detail, and there’s no evidence, although lava tubes deserve a closer look for a number of reasons. “There is no observational evidence of large structures in our solar system, nor signs of large-scale mining and processing, nor signs of residue of such processes,” Ellery writes. At the very least, there should be clay residues, Ellery says.

He concludes from this lack of evidence that ETIs likely do not exist. “We conclude, therefore, that the most tenable hypothesis is that ETIs do not exist.” But Ellery doesn’t think we should stop searching for them. In fact, the search can serve another purpose. “However, this does not invalid SETI searches of any kind – indeed, it requires them in a Popperian sense to attempt to disprove the hypothesis.” Karl Popper was a philosopher who argued that empirical falsification should take precedence over the scientific method.

It’s premature to conclude that ETIs don’t exist. But whether they do or not doesn’t change the main thrust of Ellery’s article. Self-replicating machines are coming, and they represent the best way for humanity to explore and expand into the galaxy.

“… the self-replicating machine is the ultimate machine affording unchallenged cosmological power to the human species over the longest term.”

The post We’ll be Building Self-Replicating Probes to Explore the Milky Way Sooner Than you Think. Why Haven’t ETIs? appeared first on newsastronomy.com.