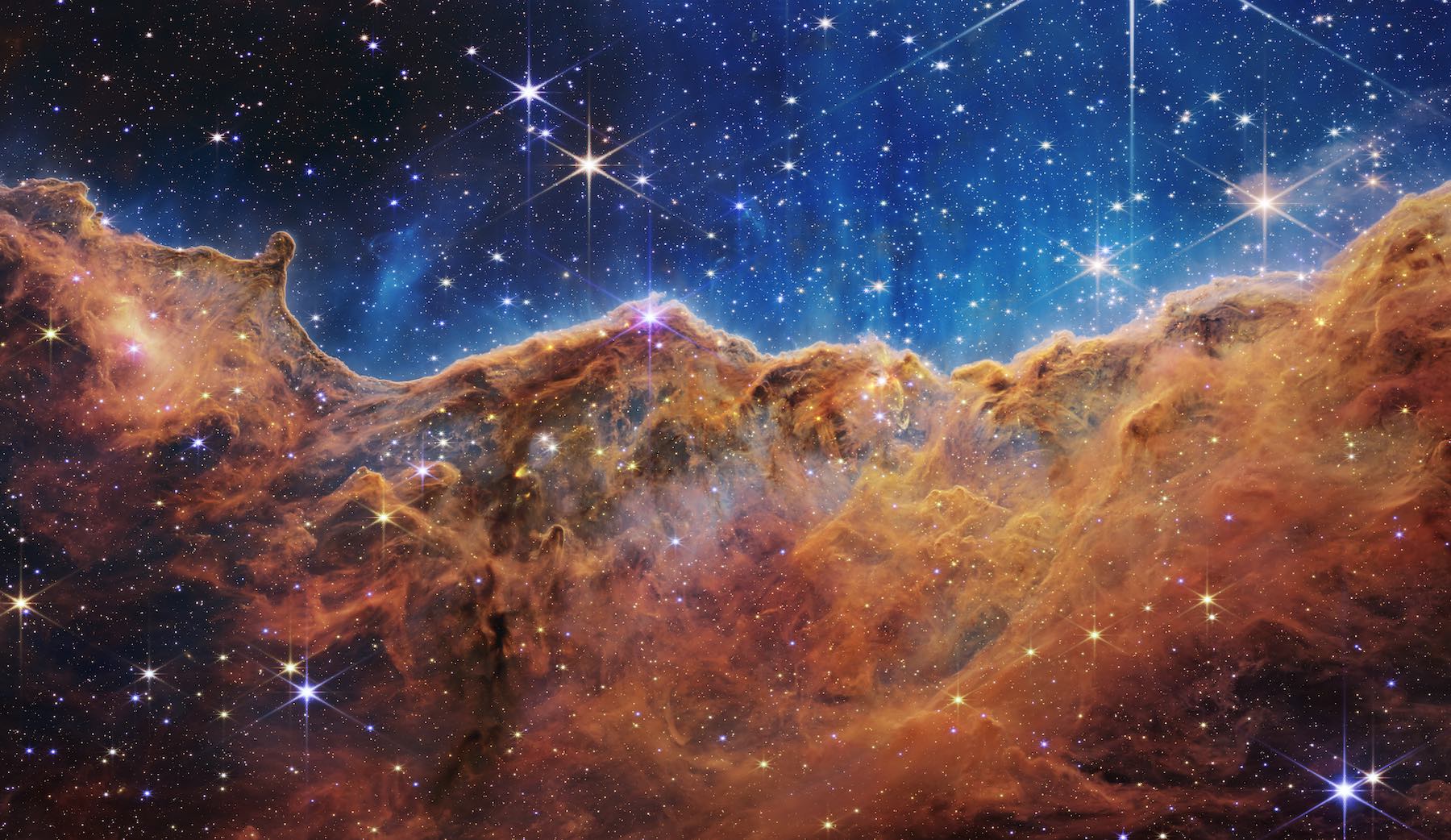 This is one of the first batch of images from Webb revealed Tuesday by the science team working on the $10 billion mission.

The tallest of the “mountains” of gas and dust visible in this image are 7 light-years high, according to NASA. The star-forming region of Carina Nebula imaged by Webb is known as NGC 3324.

“When I see an image like this, I can’t help but think of scale,” Straughn said. “Every dot of light we see here is an individual star not unlike our sun, and many of these likely also have planets. It just reminds me that our sun and our planets, and ultimately us, were formed out of the same kind of stuff that we see here.”

The gas and dust in the bottom half of the picture is being shaped and twisted by gigantic, young stars expelling radiation and stellar winds in a pocket near the top of the image.

“Dramatic pillars tower above the glowing wall of gas, resisting this radiation,” NASA said in a press release. “The ‘steam’ that appears to rise from the celestial ‘mountains’ is actually hot, ionized gas and hot dust streaming away from the nebula due to the relentless radiation.”

“In this view, we see some great examples of hundreds of new stars that we’ve never seen before,” Straughn said. “We see examples of bubbles and cavities and jets that are being blown out by these newborn stars. We even see some galaxies lurking in the background.”

Carina Nebula was previously imaged by the Hubble Space Telescope. Hubble’s instruments are tuned to observe the universe in ultraviolet, visible, and near-infrared light, and the telescope’s primary mirror is about a third the size of Webb, which is sensitive to longer wavelengths of infrared light.

“You can see amazing things with Hubble,” Straughn said. “When we zoom in to this new image, we’re able to see so much more detail … You sort of get this sense of depth and texture with this new data.”

Webb’s sensitivity to thermal energy allows it to see through gas and dust clouds that obscure telescopes observing in visible light. The youngest stars in Webb’s view of Carina Nebula appear as red dots in the dark, dusty region of the cloud.

“Objects in the earliest, rapid phases of star formation are difficult to capture, but Webb’s extreme sensitivity, spatial resolution, and imaging capability can chronicle these elusive events,” NASA said.

Stars form as gas and dust material inside clouds like the one viewed by Webb. Pressure from the stellar winds of nearby stars can help trigger this type of event.

“Conversely, this type of disturbance may also prevent star formation as the star-making material is eroded away,” NASA said. “This is a very delicate balance between sparking star formation and stopping it. Webb will address some of the great, open questions of modern astrophysics: What determines the number of stars that form in a certain region? Why do stars form with a certain mass?”