News Astronomy > News > We Finally Know Where the Highest Energy Cosmic Rays are Coming From: Blazars

Way out there in space is a class of objects called blazars. Think of them as extreme particle accelerators, able to marshall energies a million times stronger than the Large Hadron Collider in Switzerland. It turns out they’re the culprits in one of the great astrophysical mysteries: what creates and propels neutrinos across the universe at blazingly fast speeds? It turns out that the answer’s been there all along: blazars pump out neutrinos and cosmic rays. That’s the conclusion a group of astronomers led by Dr. Sara Buson of Universität Wurzburg in Germany came to as they studied data from a very unique facility here on Earth: the IceCube Neutrino Observatory in Antarctica.

Neutrinos are odd little ducks in the astrophysical zoo. They come from cosmic ray interactions in blazars and have very little mass. Neutrinos don’t interact with matter as they whiz through the cosmos, which means they travel through galaxies and planets. They even blast through you as you sit here and read this, and leave very little evidence of their passage. Luckily, that last characteristic means they can be traced back to their sources since electromagnetic forces don’t even faze them. 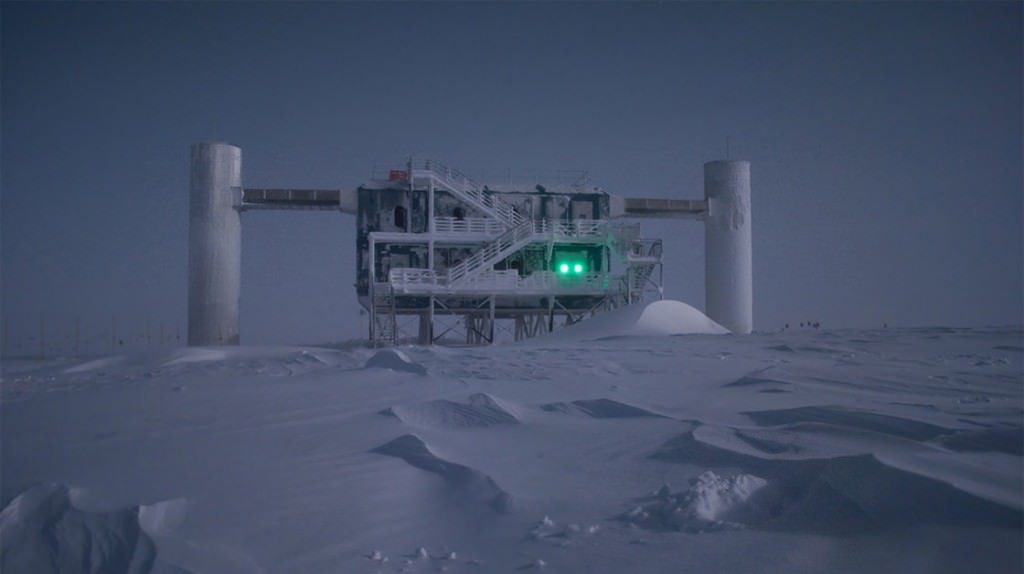 The IceCube Neutrino Observatory at the South Pole. It detected neutrinos and helped astronomers trace them to blazars. Credit: Emanuel Jacobi/NSF.

So, how did Buson and her team find the places where neutrinos are born? They turned to IceCube, which is buried deep in the ice at the South Pole. It’s the most sensitive neutrino detector on the planet. It searches for these nearly massless subatomic particles—which astronomers also like to call astrophysical messengers. That’s because they carry information about violent astrophysical events and sources–like black holes, neutron stars—and blazars.

In 2017, IceCube detected a neutrino from the blazar TXS 0506+056. It’s the active nucleus of a distant galaxy that is brighter than its entire galaxy. The data carried by the neutrino told the team that it had come from the heart of that blazar and traveled across 5.7 billion light-years to get measured by IceCube. It doesn’t just send out neutrinos—it’s also a bright radio source and pumps out light across the electromagnetic spectrum. (For the stargazers among us, this blazar lies in the direction of the left shoulder of the constellation Orion.)

Of course, TXS 0506+056 isn’t the only source of neutrinos (aside from the Sun, for example). IceCube found 19 “hotspots” in the southern sky. At least ten of them are very likely blazars. “The results provide, for the first time, incontrovertible observational evidence that the sub-sample of PeVatron blazars are extragalactic neutrino sources and thus cosmic ray accelerators,” Buson said in a press release statement.

PeVatron blazars speed up particles up to at least PeV energies. PeV is short for “peta electron volt” and is 1015 electron-volts. To give you an idea of how powerful that is, the Large Hadron Collider achieved slightly more than 1 PeV in 2015.

These nearly massless, high-speed cosmic rays and neutrinos are the latest “messengers” from the distant universe. For a long time, astronomers used light to study the universe. But, it’s not the only messenger out there that can teach us about the stars, planets, galaxies, black holes, and other objects in the cosmic zoo. Neutrinos, cosmic rays, and gravitational waves provide other message ways carrying valuable information about distant astrophysical events and objects.

According to team member Marco Ajello of Clemson University, multi-messenger astronomy adds immeasurably to our understanding of the universe. “It’s like feeling, hearing, and seeing at the same time. You’ll get a much better understanding,” he said. “The same is true in astrophysics because the insight you have from multiple detections of different messengers is much more detailed than you can get from only light.”

The data provided by neutrinos and other messengers from the distant universe point the way to a better understanding of the objects like blazars that create them. The team members will now focus on why and how blazars accelerate particles like neutrinos. Obviously, they’re extremely energetic objects in their own right. Blazar TXS 0506+056 is a typical active galactic nucleus powered by a supermassive black hole. It has a relativistic jet pointing directly at us here on Earth, but luckily, we’re too far away to be harmed by it. Instead, we get to watch as it generates neutrinos. It is, as a matter of fact, the first known source of astrophysical neutrinos—and a very early provider of multi-messenger astronomy. Now astrophysicists have a whole new set of objects acting as probes of the distant universe.

Astrophysicists prove neutrinos originate from blazars
Beginning a Journey Across the Universe: The Discovery of Extragalactic Neutrino
Factories

The post We Finally Know Where the Highest Energy Cosmic Rays are Coming From: Blazars appeared first on newsastronomy.com.