On February 11th, 2016, researchers at the Laser Interferometer Gravitational-Wave Observatory (LIGO) announced the detection of gravitational waves (GW) for the first time. As predicted by Einstein’s General Theory of Relativity, these waves result from massive objects merging, which causes ripples through spacetime that can be detected. Since then, astrophysicists have theorized countless ways that GWs could be used to study physics beyond the standard models of gravity and particle physics and advance our understanding of the Universe.

To date, GWs have been proposed as a means of studying Dark Matter, the interiors of neutron stars and supernovae, mergers between supermassive black holes, and more. In a recent study, a team of physicists from the University of Amsterdam and Harvard University has proposed a way where GWs could be used to search for ultralight bosons around rotating black holes. This method could not only offer a new way to discern the properties of binary black holes but could lead to the discovery of new particles beyond the Standard Model.

The research was conducted by researchers at the Gravitation Astroparticle Physics Amsterdam (GRAPPA), at the University of Amsterdam, with support provided by the Center for Theoretical Physics and the National Center for Theoretical Sciences at the University of Taipei (Taiwan), and Harvard University. The paper that describes their work, titled “Sharp Signals of Boson Clouds in Black Hole Binary Inspirals,” recently appeared in the Physical Review Letters.

It’s a well-known fact that normal matter will infall toward black holes over time, which will form an accretion disk around its outer edge (aka. Event Horizon). This disk will be accelerated to incredible speeds, causing the material within to become super-heated and release tremendous amounts of radiation while slowly being accreted onto the black hole’s face. However, for the past few decades, scientists have observed that black holes will shed some of their mass through a process called “superradiance.”

This phenomenon was studied by Stephen Hawking, who described how rotating black holes would throw off radiation that would appear “real” to a nearby observer, but “virtual” to a distant one. In the process of transferring this radiation from one reference frame to another, the acceleration of the particle itself would cause it to transform from virtual to real. This exotic form of energy, known as “Hawking Radiation,” will form clouds of low-mass particles around a black hole. This leads to a “gravitational atom,” so-named because they resemble ordinary atoms (clouds of particles surrounding a core)

While scientists know that this phenomenon occurs, they also understand that it could only be explained through the existence of a new ultralight particle that exists beyond the Standard Model. This was the focus of the new paper, where lead author Daniel Baumann (GRAPPA and the University of Taipei) and his colleagues examined how superradiance causes unstable clouds of ultralight bosons to form around black holes spontaneously. In addition, they suggest that the similarities between gravitational and regular atoms go deeper than their structure.

In short, they suggest that binary black holes could cause particles in their clouds to become ionized via the photoelectric effect. As described by Einstein, this occurs when electromagnetic energy (such as light) makes contact with a material, causing it to emit excited electrons (photoelectrons). When applied to a binary black hole, Baumann and his colleagues show how clouds of ultralight bosons could absorb the “orbital energy” of a black hole companion. This would cause some of the bosons to become ejected and accelerated, evident from the black hole’s associated GW signals. 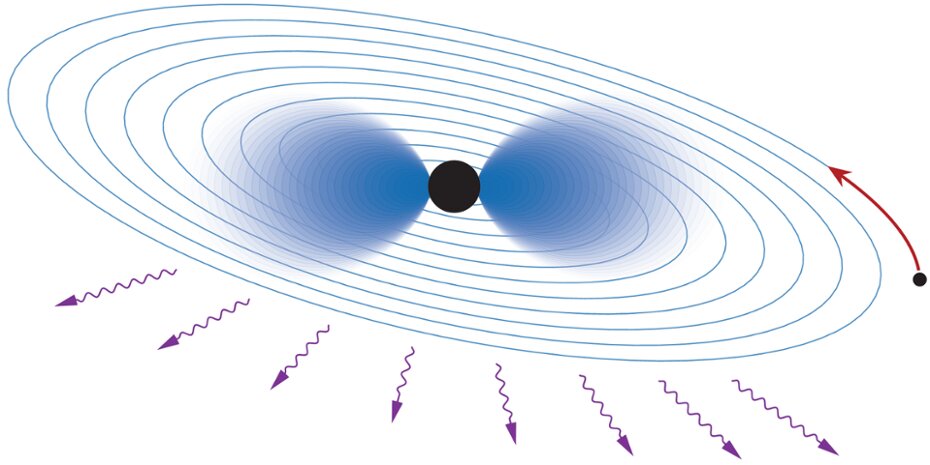 Artist’s concept of a “gravitational atom,” where a nucleus (black hole) is surrounded by clouds of particles. Credit: UvA Institute of Physics

Lastly, they demonstrated how this process could dramatically alter the evolution of binary black holes by reducing the time it takes for the objects to merge. As they state:

“The orbital energy lost in this process can overwhelm the losses due to GW emission, so that ionization drives the inspiral rather than merely perturbing it. We show that the ionization power contains sharp features that lead to distinctive “kinks” in the evolution of the emitted GW frequency.”

These “kinks,” they argue, will be discernible to next-generation GW interferometers like the Laser Interferometer Space Antenna (LISA). This process could be used to discover an entirely new class of ultralight particles and provide direct information about the mass and state of “gravitational atom” clouds. In short, the ongoing studies of GWs using more sensitive interferometers could reveal exotic physics that advance our understanding of black holes and lead to new breakthroughs in particle physics.

This is one of many possibilities that have been ventured thanks to the revolution taking place with GW astronomy. In the coming years, astrophysicists hope to use them to probe the most extreme environments in the Universe, like black holes and neutron stars. They also hope that primordial gravitational waves will reveal things about the early Universe, help resolve the mystery of the matter/anti-matter imbalance, and lead to a quantum theory of gravity (aka. a Theory of Everything).

The post We Could Discover new Kinds of Particles Around Black Holes Through Gravitational Waves appeared first on newsastronomy.com.