Earth’s oceans are one huge, uniform electrolyte solution. They contain salt (sodium chloride) and other nutrients like magnesium, sulphate, and calcium. We can’t survive without electrolytes, and life on Earth might look very different without the oceans’ electrolyte content. It might even be non-existent.

On Earth, electrolytes are released into the oceans from rock by different processes like volcanism and hydrothermal activity.

Are these life-enabling nutrients available on water worlds?

Water worlds are exoplanets with enough water to form a hydrosphere. Many of the exoplanets we’ve discovered are super-Earths and/or mini-Neptunes, and scientists expect some of them to be water worlds. On those planets, electrolytes probably play a similar role in habitability that they do on Earth’s oceans.

But the problem is that super-Earths and mini-Neptunes are more massive than Earth, and their interiors are under more pressure than Earth. These planets can form deep planetary ice mantles between the rocky cores and the surface oceans. These ice barriers aren’t regular ice. Instead, they’re high-pressure ices like ice VII, and that dense ice could be a barrier that prevents essential mineral electrolytes from moving from the cores to the oceans, where they’d be available for life.

These high-pressure ice barriers could limit the habitability of ocean worlds. But a new study suggests that electrolytes can flow through these icy mantles on water worlds. If this is true, there’s one more reason to be optimistic about life in these compelling worlds.

The study is “Stability of high-temperature salty ice suggests electrolyte permeability in water-rich exoplanet icy mantles.” It’s published in the journal Nature Communications, and the lead author is Jean-Alexis Hernandez, a researcher at the European Synchrotron Radiation Facility.

“Electrolytes play an important role in the internal structure and dynamics of water-rich satellites and potentially water-rich exoplanets,” the paper begins. “However, in planets, the presence of a large high-pressure ice mantle is thought to hinder the exchange and transport of electrolytes between various liquid and solid deep layers.” 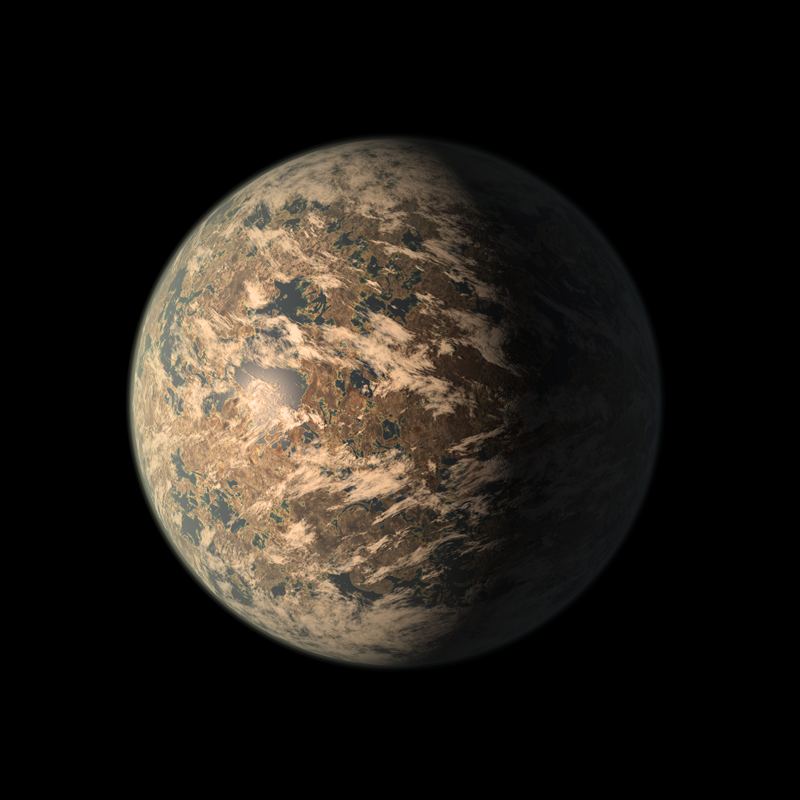 This is an artist’s impression of TRAPPIST-1e, a potential water world. Planets like this may have submerged mantles of high-pressure ice that act as a barrier to nutrient flow. Image Credit: By NASA/JPL-Caltech – Cropped from PIA22093: TRAPPIST-1 Planet Lineup – Updated Feb. 2018, Public Domain, https://commons.wikimedia.org/w/index.php?curid=76364487

The ice in these mantles is different than Earth’s ice. A series of ice types form under higher pressures on more massive planets. Regular, atmospheric Earth ice is called Ice I. Researchers have created other types in laboratory experiments, from Ice II to Ice VII. In one experiment, researchers subjected a drop of water to a powerful shock wave and created Ice VII, though it only lasted a moment.

In ocean worlds that are super-Earths or mini-Neptunes, the deeper layers of the ocean are likely frozen into high-pressure ices like Ice VII. Ice VII is structurally different than Ice I. In Ice VII, water molecules break apart, oxygen ions crystallize, and the hydrogen atoms move around freely in the oxygen crystal lattice. According to the study’s simulations, nutrients can make their way into the ice.

Ice VII has an important characteristic when it comes to nutrient transport. While regular Earth ice expels salt as it forms, ice VII can hold about 2.5% of NaCl in its structure by weight. The NaCl in Ice VII lowers the ice’s melting point and softens it. So convection currents from the planet’s interior can propel the NaCl upward through the ice and into the ocean. That creates a temperature differential, and the ice cools and sinks again. The result is a recycling current of salt from the planet’s rocky interior, up through the ice mantle into the ocean, and down again. 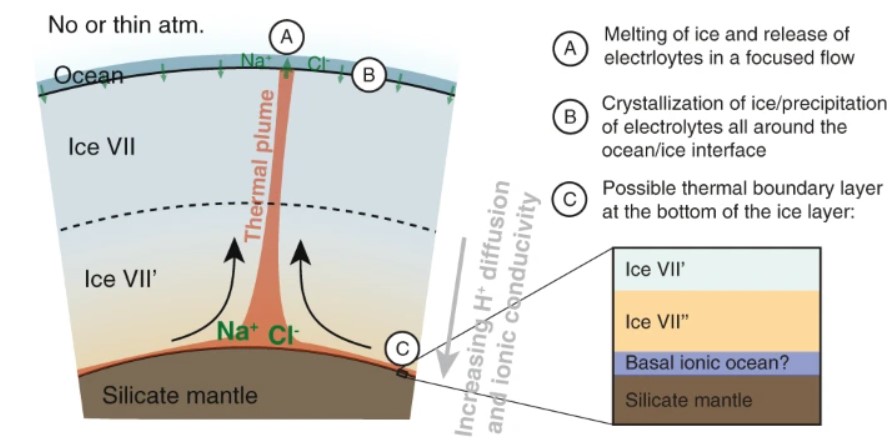 This figure from the study shows how NaCl can be released from an exoplanet’s silicate mantle and flow upward due to convection. Image Credit: Hernandez et al. 2022.

This may be happening in our Solar System. Researchers have found evidence of hydrated salt minerals staining the surface of some of the icy moons. Moons like Ganymede, Callisto, Europa, and Enceladus all have likely subsurface oceans under their frozen shells, with HP ice mantles at different depths that form barriers between their rocky cores and their oceans. So the minerals staining the surfaces were transported through at least one layer of ice, maybe more. Some of the moons aren’t massive enough to form Ice VII, but Jupiter’s Callisto, Ganymede, and Saturn’s Titan are massive enough to form mantles of high-pressure ice. 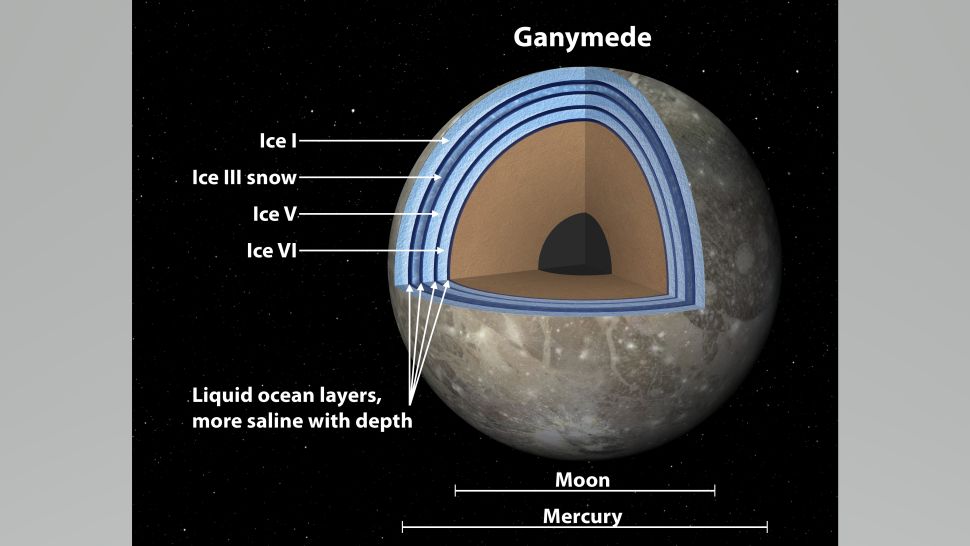 This diagram shows what the interior of Ganymede, the largest moon in the Solar System, might look like. Layers of the ocean with different salinities might be sandwiched between layers of ice with different structures. Image Credit: NASA/JPL–Caltech

If nutrients like sodium chloride can be transported from a planet’s rocky interior through a layer of Ice VII to the ocean, it could be a game-changer. Suddenly, there’s more evidence that these ocean worlds could support life. 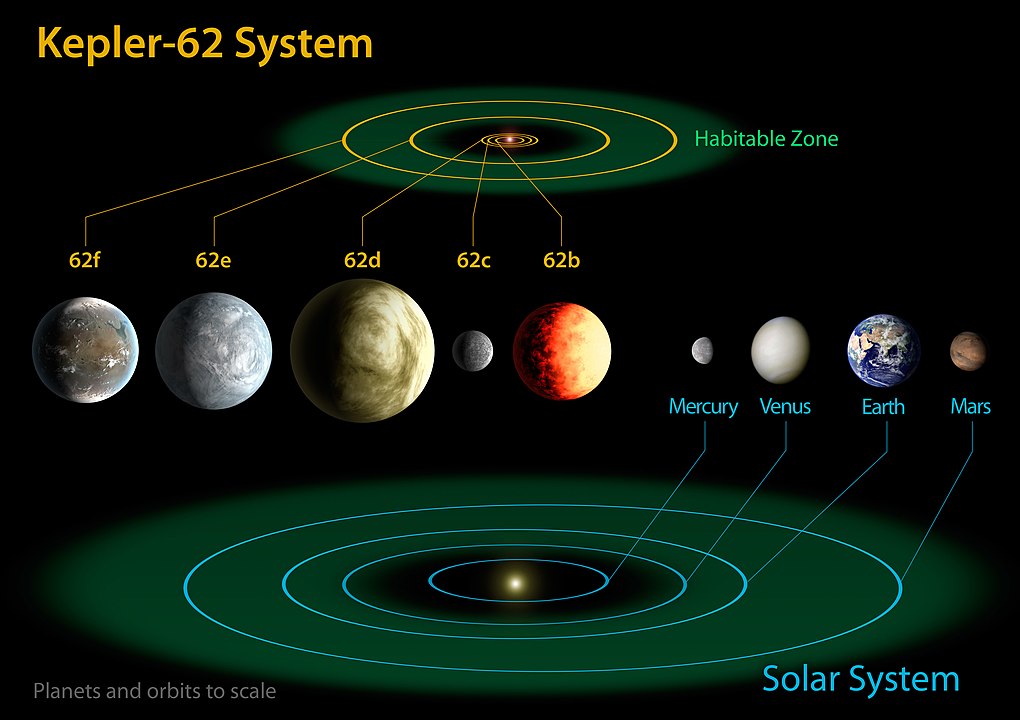 Baptiste Journaux is a researcher at the University of Washington, where he studies planetary sciences, including the conditions in deep planetary oceans. Journaux wrote a commentary on this new study in Nature Communications. In his article, he said exoplanet discoveries show that ocean worlds are likely widespread. Our Solar System has ocean moons but no ocean worlds. And while Earth’s surface is two-thirds ocean, our planet is actually remarkably dry. 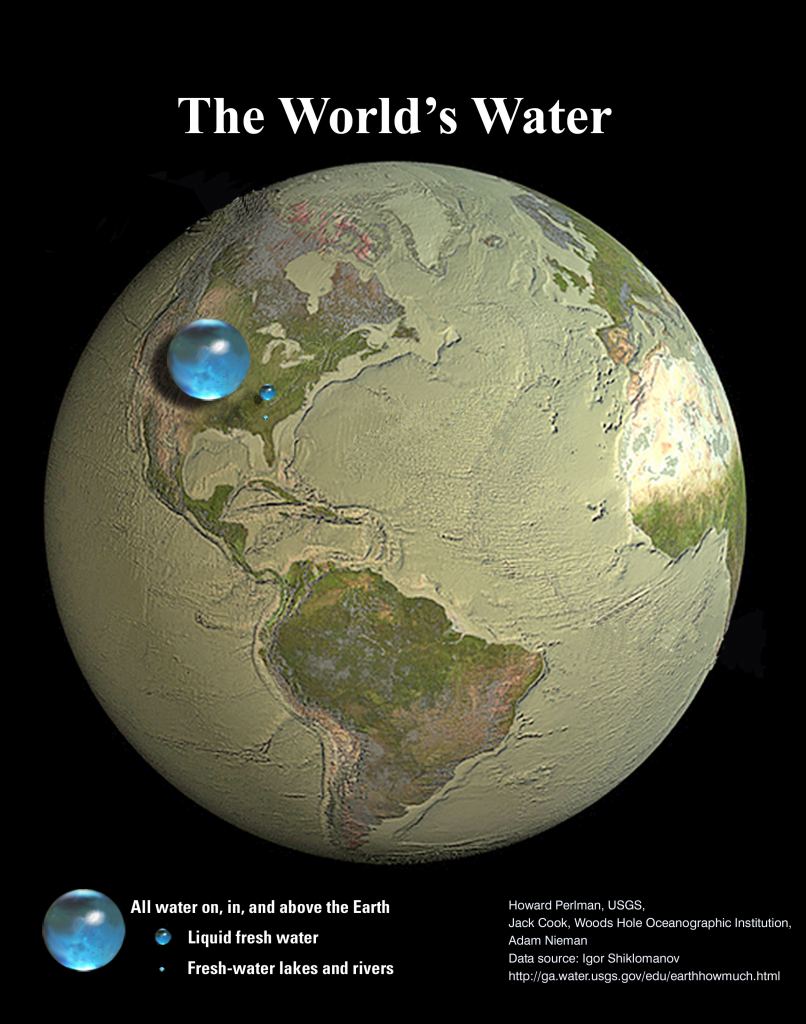 Earth might be two-thirds covered in water, but it’s nowhere near being an ocean planet. Image Credit: USGS.

These new results have boosted the habitability potential of all of the ocean worlds out there, according to Journaux. “The study by Hernandez et al. offers the most convincing argument yet in resolving the dilemma of large planetary hydrosphere habitability.” 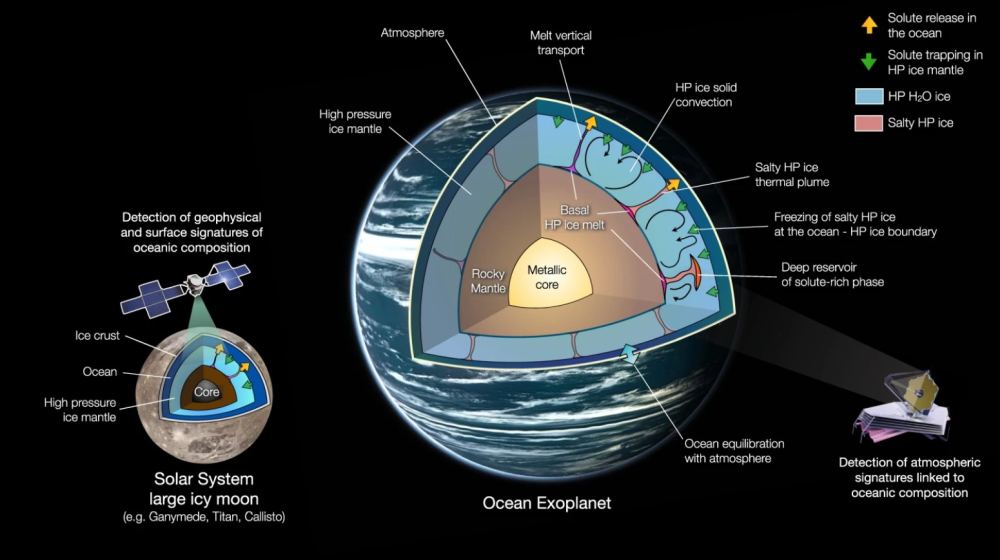 Several geologic processes can release minerals from a planet’s rocky core into an icy mantle. According to this new study, the dense ice in the mantle allows nutrients to be transported to the surface ocean on ocean planets. Image Credit: Baptiste Journaux

The study of ocean exoplanets is all about simulations; there’s no way to observe them in great detail. But the JWST could start to change that. It may be able to detect spectroscopic fingerprints from interactions between an ocean planet’s atmosphere and its ocean. And more help is on the way.

NASA and the ESA are developing missions to some of the Solar System’s icy/ocean moons. The ESA’s Jupiter Icy Moons Explorer (JUICE) will launch in about a year and reach the Jovian system in 2031. In 2034 it will enter orbit around Ganymede, the solar system’s largest moon. It’ll eventually approach within 500 km (310 mi) of Ganymede’s surface.

NASA’s Europa Clipper is scheduled to launch in 2024 and reach Jupiter by 2030. Even though it’ll orbit Jupiter, it’ll be studying Europa, another ocean moon with an icy shell.

Ganymede and Callisto are likely massive enough to form high-pressure water ice mantles. Titan is too, but it’s a long way away, and though there’s some talk of a mission to Saturn’s largest moon, it’s far from certain. 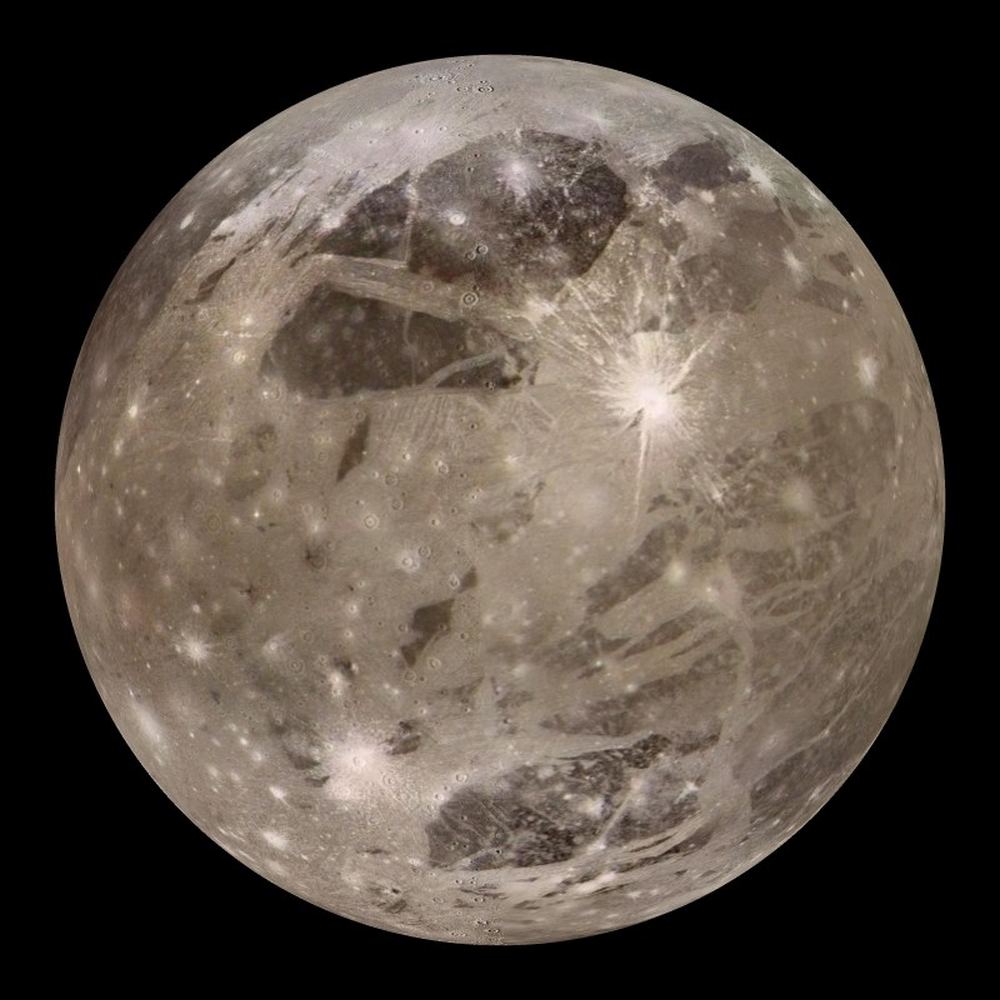 Ganymede is massive enough to form one or more layers of high-pressure ice. If this new study is correct, critical electrolytes may be able to cycle between the moon’s rocky core and its oceans, which boosts any chances of habitability. Image Credit: By National Oceanic and Atmospheric Administration

The missions to these moons will start to test some of the study’s conclusions. If electrolytes can be transported through high-pressure ice layers on Ganymede, that’ll be an essential finding in favour of habitability on water worlds. But life requires more than just Na and Cl. We still don’t know if other important molecules can pass through these icy barriers.

The upcoming missions will tell us a lot about our Solar System’s icy ocean moons and the permeability of high-pressure ice mantles. Some of the findings will also extrapolate to ocean worlds in other solar systems. “These missions will not only allow us to better understand the inner-workings of the hydrospheres of icy moons but will be key to understanding the largest oceans in our universe in water-rich exoplanets, their potential for habitability and their future characterization by modern and next-generation telescopes,” Journaux said in his article.

The authors of the new study end by talking about some of the other factors involved in ocean world habitability. They point out that electrolyte transport depends “… on the actual size, composition and surface temperature of the considered planet, which might result in different scenarios at the interface between the ocean and the ice mantle, and between the ice mantle and the rocky core.”

Many factors need to be just right for an ocean planet to transport nutrients to the surface ocean. But at least they showed with their simulations that it’s possible.

We’ll have to wait to find out if their simulations are correct and how widespread the phenomenon is.

The post Water Worlds Could Have Plumes of Nutrients Carried up From Down Below appeared first on newsastronomy.com.