The OSIRIS-REx spacecraft conducted a two-year reconnaissance and sample collection at the asteroid Bennu, providing crucial data about the 500-meter-wide potentially hazardous rubble pile/space rock. When OSIRIS-REx arrived on Dec. 3, 2018, it needed some tricky navigation and precise maneuvers to make the mission work.

Experts at NASA Goddard’s Scientific Visualization Studio created an amazing visualization of the path the spacecraft took during its investigations. A short film called “A Web Around Asteroid Bennu” highlights the complexity of the mission, and the film is being shown at the SIGGRAPH computer graphics conference in Vancouver, British Columbia, Canada, a festival honoring standout works of computer animated storytelling.

Other films in the festival include Disney’s “Encanto” and Warner Brothers’ “The Batman.”

Data visualizer Kel Elkins compiled the data for the film, which shows the web-like flight path for OSIRIS-REx, as well as the touch-and-go, or TAG, maneuver to collect the sample from the asteroid’s surface.

“I started working with the trajectory data in 2015,” Elkins said. “And when you first see an image of all the different maneuvers it looks like a rat’s nest. But it was really exciting to see these complicated maneuvers in 3D space.”

The video runs about four minutes in total, showing the flight path around Bennu from beginning to end in a single, continuous shot.

Screenshot from the visualization of OSIRIS-REx’s orbital path.

“From a trajectory and navigation perspective, the team really did things that have never been done before in planetary exploration,” said Mike Moreau, deputy project manager for OSIRIS-REx at NASA Goddard. “We flew the spacecraft closer to this object than any spacecraft has ever been flown before; we did maneuvers that were centimeters per second, or millimeters per second, in order to get the spacecraft exactly where it needed to be and to change its orbit.”

Taking their data visualization to the next level, Elkins and colleagues plan to release a 360-degree version of “A Web Around Asteroid Bennu” that wraps the video around the viewer, for an interactive experience on VR headsets, mobile devices, and online.

“As amazing as it is to see the trajectory in front of you in the original format, there’s something about putting the viewer in the middle of it and letting them look around,” Elkins said. “You’re in space and OSIRIS-REx is flying around you. We’re really excited to be able to publish this additional 360-degree view.” 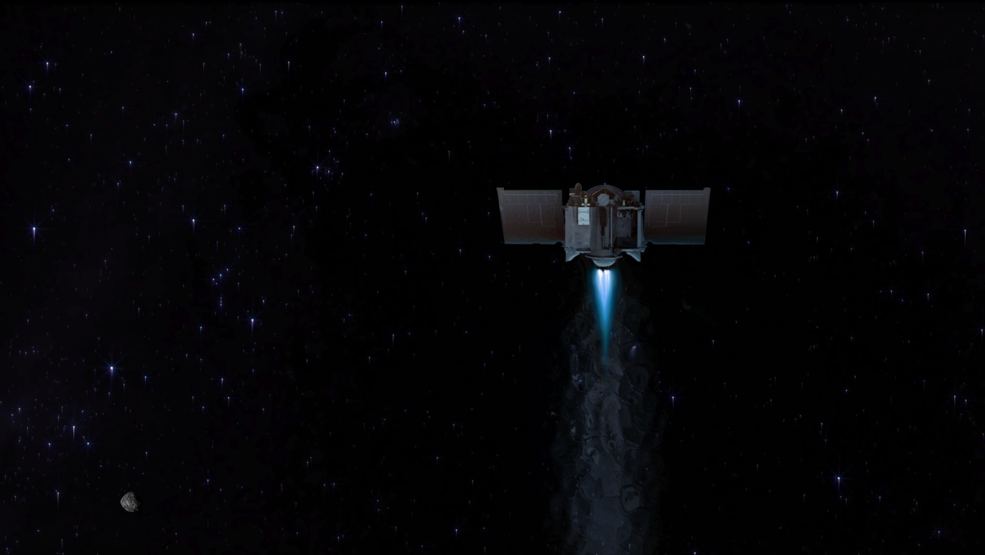 This illustration shows the OSIRIS-REx spacecraft departing asteroid Bennu to begin its two-year journey back to Earth. Credits: NASA/Goddard/University of Arizona

OSIRIS-REx is currently on its way back towards Earth, and in September 2023, will drop off a sample in the Utah desert. Once the sample is retrieved, the spacecraft has been given a new mission, and it will be heading to one of the most infamous asteroids of them all, the potentially hazardous asteroid Apophis for an 18 month study. The mission will be renamed OSIRIS-APEX, which is short for OSIRIS-Apophis Explorer.