A SpaceX Dragon cargo capsule loaded with more than 5,800 pounds of supplies and experiments is set to dock with the International Space Station at 11:20 a.m. EDT (1520 GMT) Saturday, delivering a NASA instrument to study the mineral content of dust storms and several small CubeSats.

The unpiloted supply ship launched Thursday evening from NASA’s Kennedy Space Center in Florida on top of a Falcon 9 rocket. Since then, the spacecraft has completed a series of thruster burns to fine-tune its approach to the space station, culminating in the final automated rendezvous sequence Saturday morning.

The mission will mark SpaceX’s 25th cargo delivery to the space station under two multibillion-dollar Commercial Resupply Services contracts with NASA. This flight, known as CRS-25, will be the third arrival at the space station for this particular reusable Cargo Dragon spacecraft.

The Cargo Dragon will approach from behind and below the station, passing about 1,300 feet (400 meters) directly below the complex before swinging into position directly in front of the outpost to line up with the forward docking port of the Harmony module.

The spacecraft uses thermal and laser ranging sensors, coupled with a relative GPS navigation system, to navigate toward the space station.

After reaching a waypoint about 720 feet (220 meters) in front of the station, the Dragon spacecraft will proceed in for docking with the Harmony module at 11:20 a.m. EDT, using its Draco thrusters to control the closure rate and alignment with the docking corridor.

A brief hold is planned about 66 feet (20 meters) from the station before final approach for docking. NASA astronauts Jessica Watkins and Bob Hines on the space station will monitor the Dragon spacecraft’s rendezvous and docking, ready to send hold or abort commands in the event of a problem.

Missions controllers at NASA’s Johnson Space Center in Houston and at SpaceX headquarters in Hawthorne, California, will monitor the rendezvous and docking.

Data and power cables will also robotically connect inside the docking mechanism to link the Dragon spacecraft with the space station.

Once Dragon is firmly attached to the station, astronauts on the station will open hatches to begin unpacking cargo inside the craft’s pressurized compartment. 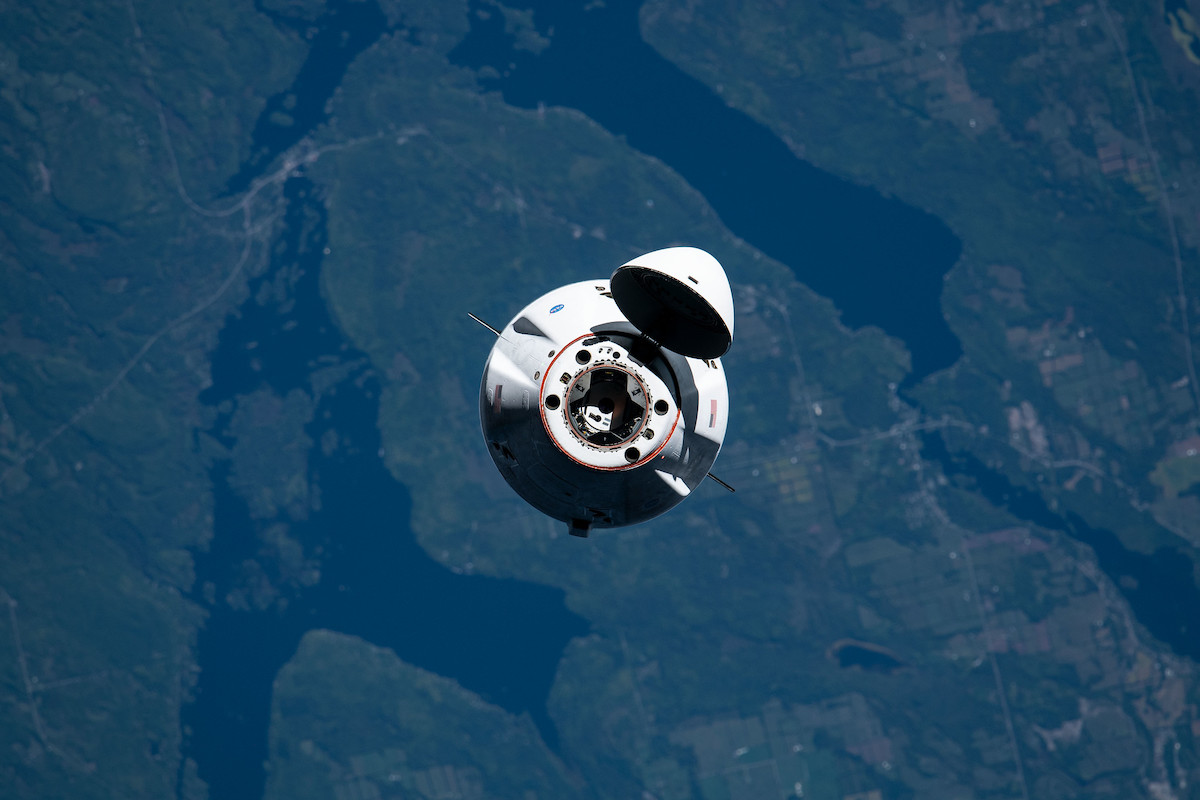 The supplies inside the pressurized section of the spacecraft include fresh food for the seven astronauts and cosmonauts living on the station — NASA says apples, oranges, cherry tomatoes, onions, baby carrots, garlic, tahini, cheese, and dried sausage are on-board — and equipment to support around 40 research investigations.

The Dragon spacecraft will also deliver five NASA-sponsored CubeSats to the space station for deployment though the Japanese Kibo lab module.

Other experiments on the CRS-25 mission will investigate how the immune system changes in microgravity, crop growth in space, and a study looking at an alternative to concrete that could be used to construct structures on the moon or Mars.

Developed at NASA’s Jet Propulsion Laboratory, the $118 million EMIT instrument will measure the mineral content of the world’s desert regions, the source of global dust storms that can impact climate and weather worldwide.

Dust storms can spread from continent, where they can cause temperatures to rise or fall, form clouds, provide nutrients to ocean and land organisms, restrict visibility, and pose a health hazard to people.

This map shows highlighted arid and desert regions that will be observed by the EMIT instrument. Credit: NASA/JPL-Caltech

“This is an important cycle in the Earth system,” said Rob Green, EMIT’s principal investigator and a senior research scientist at JPL.

The EMIT instrument will be removed from the trunk of the Dragon spacecraft after docking by the space station’s Canadian-built robotic arm, and placed on a mounting bracket on the lab’s port-side truss. EMIT will measure the mineral composition of desert soils with a visible and shortwave infrared spectrometer.

Green said EMIT will “close a gap in knowledge about mineral dust source regions of our planet.” A NASA spokesperson said the EMIT instrument, which is part of the agency’s Earth Venture program, is designed for a 12-month primary mission.

“Right now, our knowledge is traced to abut 5,000 mineral analyses where minerals have been collected and analyzed. When EMIT completes its mission, we will have a billion direct observations of the mineral composition fo the Earth’s arid land,” Green said.

The space station’s orbit will take the EMIT instrument over most of the world’s deserts, including the Sahara Desert of Africa, the Middle East, and deserts of Asia, Australia, and the western Americas.

“Whether it’s an iron oxide, kind of like rust, or a carbonate, or a clay, those different mineral molecules leave fingerprints in the light we get to measure,” Green said.

The CRS-25 mission was scheduled for launch in early June, but officials grounded the Dragon spacecraft after finding a leak in the ship’s propulsion system. SpaceX detected “elevated vapor readings” of monomethyl hydrazine, or MMH, fuel in an “isolated region” of the Dragon spacecraft’s propulsion system during propellant loading ahead of the launch in early June, NASA said in a statement.

The Dragon spacecraft carries hydrazine and nitrogen tetroxide propellants to power its Draco thrusters for in-orbit maneuvers, including rendezvous burns to approach the space station, and the deorbit burn at the end of the mission to return to Earth.

Read more about the leak in our mission preview story. 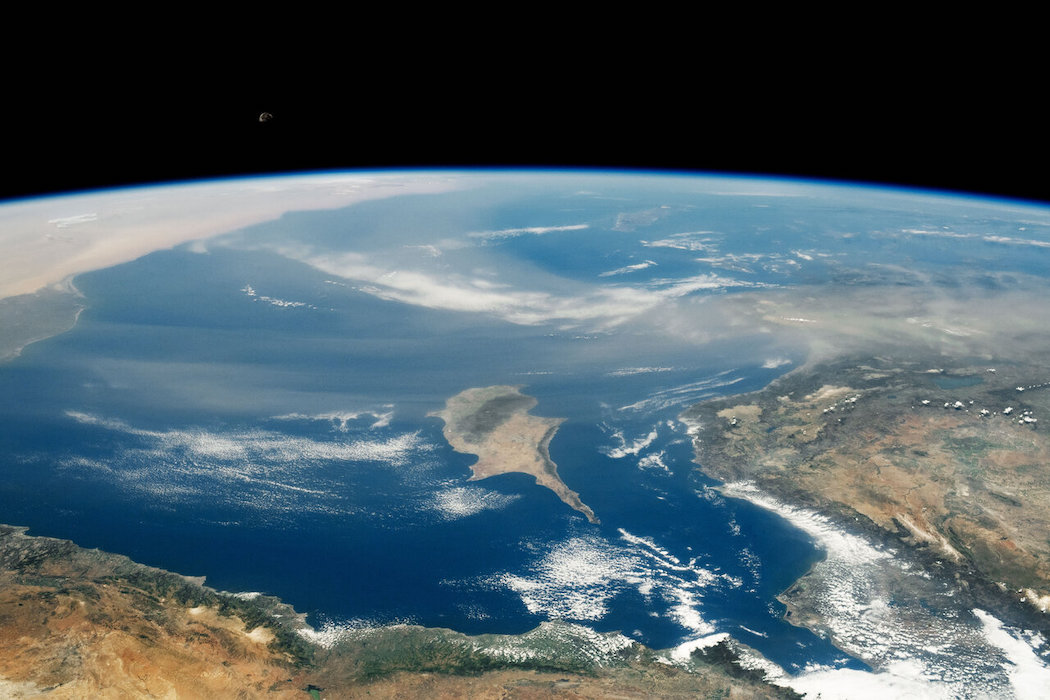 A dust plume stretches over the eastern Mediterranean, shrouding parts of Greece, Turkey, and Cyprus. The June 2020 image has been cropped and enhanced to improve contrast, and lens artifacts have been removed. NASA’s EMIT mission will help scientists better understand how airborne dust affects climate. Credit: NASA

The Dragon spacecraft’s return to Earth is scheduled in mid-August, when the cargo capsule will undock from the station and head for splashdown off the coast of Florida.

A SpaceX recovery boat will be in position to retrieve the capsule from the sea and return it to Cape Canaveral for unpacking and refurbishment.

The cargo slated for return to Earth on the CRS-25 mission in mid-August includes a spacesuit worn by European astronaut Mattias Maurer on a spacewalk in March. Astronauts found water inside Maurer’s spacesuit helmet after he safely returned inside the station, a similar issue to the problem that caused a spacewalk emergency in 2013 when European astronaut Luca Parmitano had to cut short a spacewalk due to a water leak.

“We’ve got to get that suit home got take a look at it as part of the investigation to really try to understand what happened to the suit, and that’ll be part of what we need for our assessment for our eventual readiness when we look at returning back to nominal EVAs (spacewalks),” Weigel said.