Northrop Grumman is set to test-fire a full-scale booster for NASA’s Space Launch System Thursday in Utah, a test designed to demonstrate a new motor ignitor and steering system for use on future versions of the giant moon rocket.

The main objectives Thursday include gathering data on the performance of a new thrust vector control system that would be used to steer the rocket in flight. The test will also demonstrate a newly qualified motor ignition system qualify a new nozzle phenolic ablative solvent material, according to Northrop Grumman.

“The current SLS boosters for the first eight Artemis missions are using a robust mix of new avionics and substantial heritage hardware from the Space Shuttle Program,” said Bruce Tiller, NASA’s SLS booster program manager at the Marshall Space Flight Center in Alabama. “This particular ground test will demonstrate some new materials, a completely new steering system, and a new way to ignite the motor.  Data from this test will improve our booster design for future missions that take us farther into deep space than ever before.”

Positioned horizontally in a test stand for the hotfire test Thursday, the 154-foot-long booster will generate about 3.6 million pounds at maximum power. The five-segment booster is an extended version of the solid rocket motor that flew on the space shuttle. 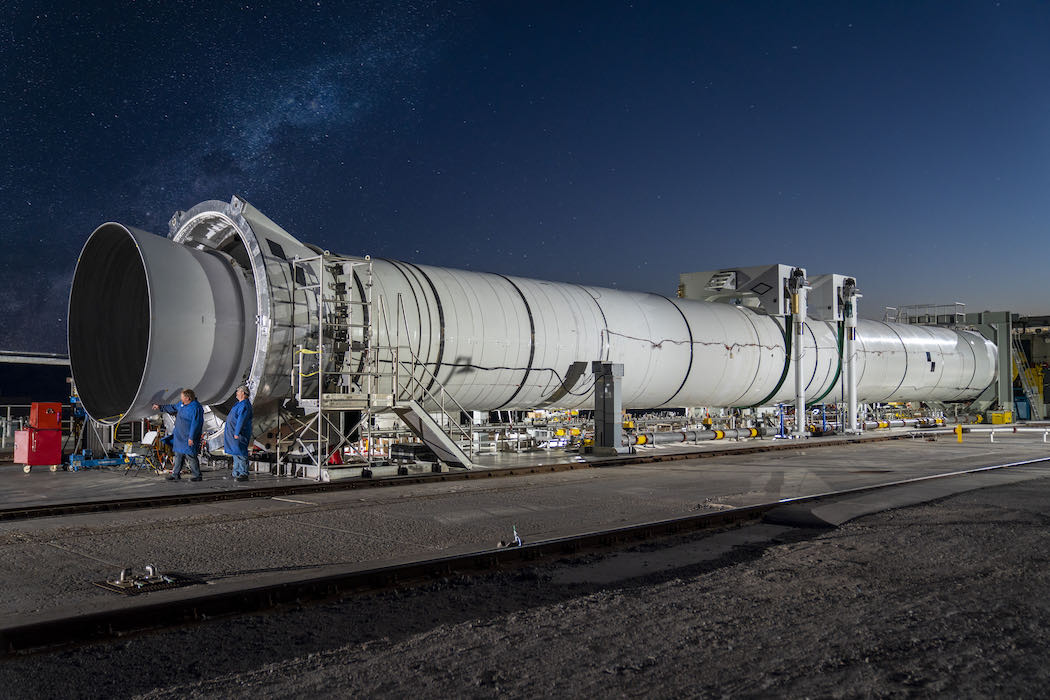 The solid-fueled boosters will generate about 75% of the 8.8 million pounds of thrust for each SLS mission. The first SLS test flight, called Artemis 1, is scheduled for launch from NASA’s Kennedy Space Center in Florida no earlier than Aug. 29.

Some of the rocket motor’s design changes tested Thursday could be introduced beginning with the ninth SLS flight, officials said.

Aside from testing new materials, the test-firing Thursday also provided another opportunity to evaluate the motor’s manufacturing and performance ahead of the first SLS flight.

Northrop Grumman, through its precursor company Orbital ATK, had conducted six previous test-firings of the five-segment SLS booster since 2009, including two developmental motors and two full-size qualification units to certify the booster design is ready for flight.

A Flight Support Booster test in 2020, FSB-1, tested the performance of an aluminum powder fuel procured from a new supplier. The rocket motor consumes the aluminum powder in combination with ammonium perchlorate. The two chemicals are mixed in epoxy resin, which cures with a rigidness of a pencil eraser and remains stable until the rocket is ignited.