Artemyev and Cristoforetti opened the hatch to the space station’s Poisk airlock at 10:50 a.m. EDT (1450 GMT) Thursday, marking the official start of the spacewalk.

The spacewalkers plan to install work platforms and work station adapter hardware for the European Robotic Arm outside the Russian Nauka lab module, which launched to the space station last July. Thursday’s excursion is the third spacewalk to activate the European Robotic Arm and prepare it for future operations to relocate hardware outside the Russian segment of the space station.

The previous European astronauts that performed spacewalks in Russian spacesuits did it outside the Russian Mir space station in the 1980s and 1990s.

The spacewalk Thursday is expected to last about six-and-a-half hours. It is the 251st spacewalk for assembly, maintenance, and upgrades of the International Space Station, and the sixth excursion outside the ISS this year.

Other tasks on Thursday’s spacewalk include the hand-deployment of 10 small Russian nanosatellites to perform radio technology experiments in low Earth orbit. The nanosatellites will be released in a retrograde direction behind the space station to eliminate any risk of the spacecraft re-contacting the complex.

The small research satellites are expected to naturally re-enter the Earth’s atmosphere within a few months.

The work on the European Robotic Arm will prepare the crane-like structure to relocate an airlock stowed outside Russia’s Rassvet module to its future home on the Nauka module. That relocation will occur on a future Russian spacewalk.

Artmeyev and Cristoforetti will also replace a protective window on a camera lighting unit on the hand of the European Robotic Arm, and extend a telescoping Strela boom from the Zarya module toward the Poisk airlock to help facilitate movement of crew members and hardware on future spacewalks. 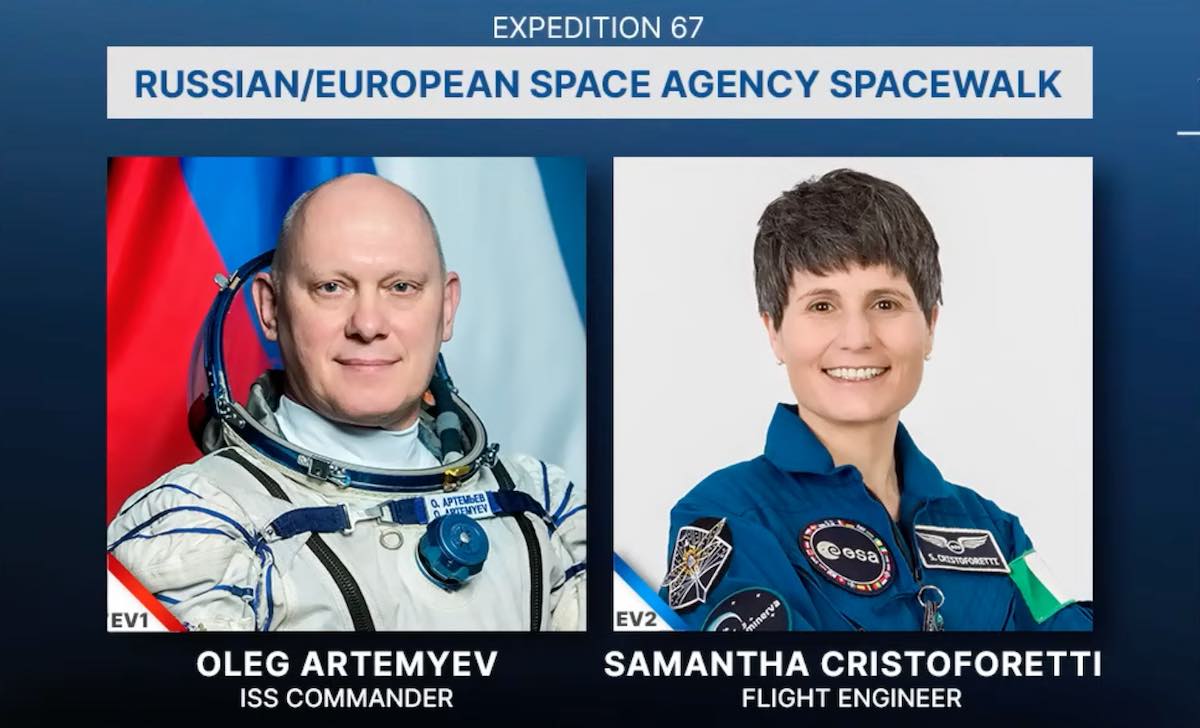 The spacewalk Thursday will be the sixth EVA for Russian cosmonaut Oleg Artemyev, and the first in the career of ESA astronaut Samantha Cristoforetti. Credit: NASA TV / Spaceflight Now

The European Robotic Arm is the third system of its kind at the station, joining the Canadian and Japanese robot arms on the U.S. section of the research complex.

Full-scale development of the European Robotic Arm began in 1996, and the arm was in storage more than a decade to wait for Russia’s Nauka lab module to be ready for launch. The European arm, primarily built in the Netherlands, was originally planned for launch on a NASA space shuttle.

“ERA is a bit different than the other manipulators that already on the station,” said Philippe Schoonejansm, the European Space Agency’s ERA project manager. “It can be fully preprogrammed in advance, which is helpful. It can be operated from external control panel, which the others do not have. So even when you’re doing a spacewalk, you can control ERA by just seeing and operating this control panel. But also it can operated from inside using only a laptop, so it doesn’t need any joysticks.”

ESA says the arm capable of carrying a load of more than 17,000 pounds, or 8 metric tons, with a precision of one-fifth of an inch (5 millimeters). The arm extends about 37 feet (11.3 meters) in length.