News Astronomy > News > Want to Live on Mars? Here’s Where the Water is

When crewed missions begin to travel to Mars for the first time, they will need to be as self-sufficient as possible. Even when Mars and Earth are at the closest points in their orbits to each other every 26 months (known as “Opposition“), it can take six to nine months for a spacecraft to travel there. This makes resupply missions painfully impractical and means astronauts must pack plenty of supplies for the journey. They will also need to grow some of their food and leverage local resources to meet their needs, a process known as In-Situ Resource Utilization (ISRU).

In particular, astronauts will need to know where to find water on the Red Planet, which is no small challenge. Luckily, the European Space Agency (ESA) has created a mineral map showing the locations of aqueous minerals (rocks that have been chemically altered by water). This map was created by the Mars Orbital Catalog of Aqueous Alteration Signatures (MOCAAS) project and took over ten years to complete. When it comes time to select landing sites for crewed missions to Mars (in the next decade and beyond), maps like this will come in mighty handy!

The M3 project is an international program that includes researchers from the Institut d’Astrophysique Spatiale (IAS) in Paris, the Laboratoire d’Astrophysique de Marseille (LAM) at Aix-Marseille University, the Institute of Space and Astronautical Science (ISAS) with the Japan Aerospace eXploration Agency (JAXA), and the ESA European Space Astronomy Center (ESAC) in Madrid, Spain. The process is detailed in a set of papers led by Lucie Rui (a researcher with JAXA’s ISAS and an ESA Research Fellow at ESA-ESAC) and John Carter (IAS and LAM) that appeared between March and August in the science journal Icarus.

The map was created using data obtained by the Mars Express Observatoire Mineralogie, l’Eau, les Glaces et l’Activité (OMEGA) instrument aboard the ESA’s Mars Express (MEx) and the Compact Reconnaissance Imaging Spectrometer for Mars (CRISM) aboard NASA’s Mars Reconnaissance Orbiter (MRO). These instruments have been mapping mineral deposits on Mars since 2003 and 2006 (respectively) to determine where water once flowed across the surface. Specifically, they searched for places where clays and salts were abundant, which are the result of rocks interacting with water over time.

The datasets of these two instruments are highly complementary since they conduct observations in the same wavelength range and are sensitive to the same types of minerals. Whereas CRISM provides high-resolution spectra of localized hydrated-mineral patches, OMEGA provides global coverage at higher spectral resolution and a better signal-to-noise ratio. And whereas CRISM is ideally-suited for mapping small areas like rover landing sites, OMEGA is better suited to global and regional mapping.

On Earth, the interactions between rocks and water under different conditions give rise to different types of clays. For example, smectite and vermiculite clay minerals result from volcanic rock interacting with relatively small amounts of water. They are identifiable based on the chemical elements they retain (iron and magnesium). Where water is more abundant, the rocks will be altered more, removing soluble elements and leaving behind clays that are richer in metals (like kaolin, which retains aluminum).

What was surprising to the research team was the prevalence of these minerals. Ten years ago, planetary scientists believed that such mineral deposits were outliers, with only 1000 outcrops on the entire planet. In contrast, the new map has revealed hundreds of thousands of such areas in some of the oldest parts of the planet. “This work has now established that when you are studying the ancient terrains in detail, not seeing these minerals is actually the oddity,” said John Carter. “I think we have collectively oversimplified Mars.” 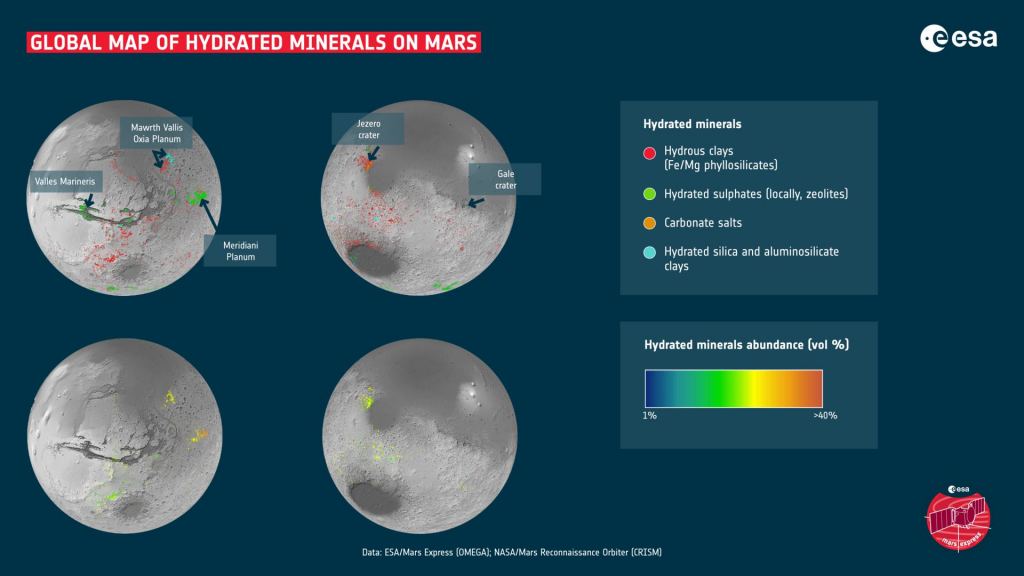 Based on previous mineral data, scientists were of the general opinion that water was limited in its extent and duration. This new map indicates that water was much more prevalent on Mars and thus played a major role in the planet’s geological evolution. What remains to be seen is whether or not the water flowed for extended periods or was confined to short, intense periods of flooding. While this map cannot answer that definitively, it is a step in that direction. Moreover, this map reveals that the types of mineral clays found on Mars are more diverse and complicated than previously thought.

In the past, planetary scientists tended to think that only a few types of clays were created during Mars’ warmer, wetter place. Then, as the waters gradually disappeared, salt deposits were left across the surface. The new map shows that while many Martian salt patches formed after the clay deposits, there were some places where salts formed earlier and others where salts and clays became mixed. This suggests that the history of Mars transitioning from a warmer water place to an arid and freezing one is more complicated than previously thought. Said Carter:

“The evolution from lots of water to no water is not as clear cut as we thought, the water didn’t just stop overnight. We see a huge diversity of geological contexts, so that no one process or simple timeline can explain the evolution of the mineralogy of Mars. That’s the first result of our study. The second is that if you exclude life processes on Earth, Mars exhibits a diversity of mineralogy in geological settings just as Earth does.”

With hundreds of thousands of mineral patches mapped out, the next step was to determine the amount of the different types of minerals. By quantifying which hydrated minerals are present on Mars and where they can be found, scientists can reconstruct the evolutionary history of Mars. “If we know where, and in which percentage each mineral is present, it gives us a better idea of how those minerals could have been formed,” said Riu. “This is what I am interested in, and I think this kind of mapping work will help open up those studies going forward.” 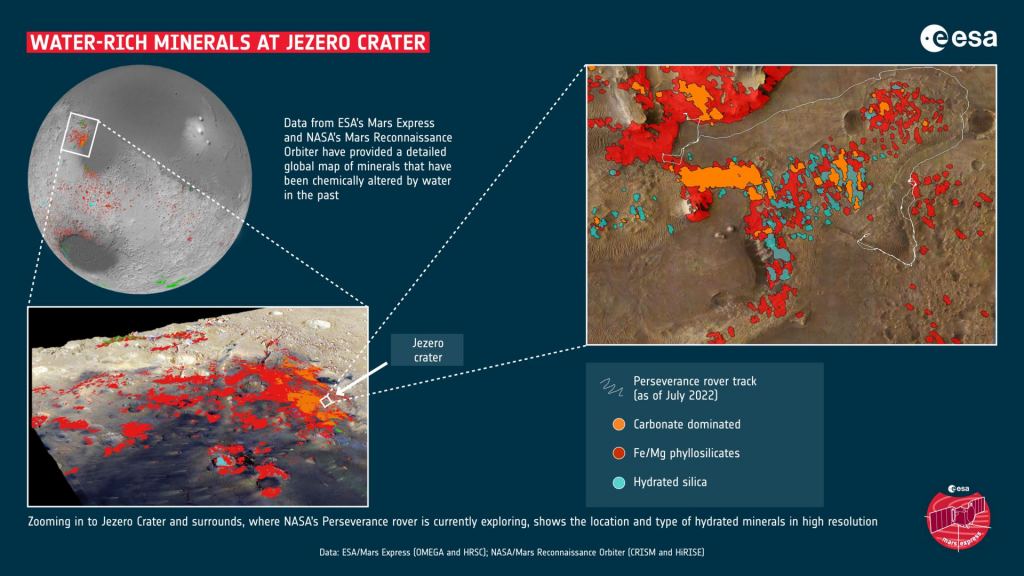 The resulting map is a major achievement, and not just because of how it could inform crewed missions to Mars. In the short term, the locations of aqueous minerals will also benefit planners looking to select sites for robotic missions. In addition to showing the mineral deposits in the Jezero Crater (see above), where the Perseverance rover is currently exploring and obtaining samples, this map also revealed extensive clay-rich sites in Oxia Planum (see below). Because of its mineral-rich nature, which includes smectite and vermiculite, this site has been selected as the landing site for the ESA’s Rosalind Franklin rover.

But of course, the long-term benefits of this kind of mapping will truly be felt when it comes time to mount crewed missions to Mars. When astronauts begin setting foot on the Red Planet, as NASA and China are planning (beginning in 2033), landing sites that are close to water sources will need to be selected. Aside from ice deposits, which might restrict landing sites to the polar regions, the presence of aqueous mineral deposits (which still contain water) create opportunities to explore the equatorial and other regions of Mars.

With a large cache of water nearby, astronauts will be able to establish base camps where they can conduct science operations. Aside from providing drinking water, aqueous mineral caches could also be used to irrigate plants (both for eating and experiments) and to create oxygen and hydrogen gas. These, in turn, could be used to supplement the astronaut’s oxygen supply, power fuel cells, or manufacture propellant – like liquid oxygen (LOX) and liquid hydrogen.

Lastly, clays and salts could be used to fashion building materials to create long-duration habitats that would provide additional radiation shielding. This will be especially useful if mission planners hope to send multiple expeditions to the same regions of Mars. With added protection, the surface habitats will be able to last longer than a single mission (a few months) and service rotating crews. Depending on how plentiful the water supply is, the bases could potentially last for years. 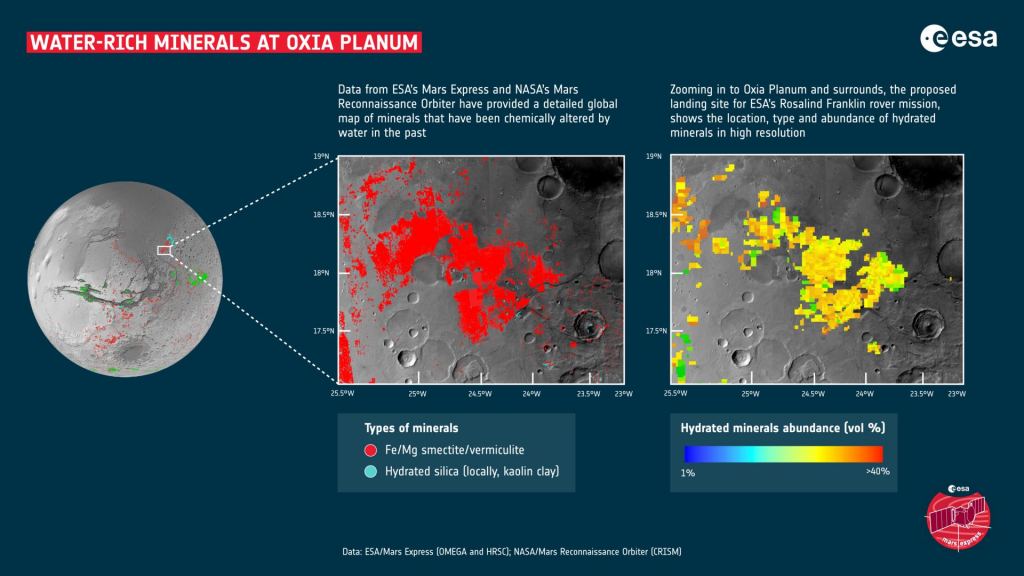 Within a decade, two major space agencies will send astronauts to Mars, and humans will set foot on another planet for the first time! Before long, they could be joined by other space agencies, commercial entities, and maybe even settlers. If Elon Musk gets his way, Starships could be transporting crews and payloads to the Red Planet sooner. This presents a myriad of challenges, ranging from logistical and technical to ensuring the health and safety of the astronauts during the mission (which could last as long as three years).

What is exciting is that we are at the point where the requisite planning is starting to come together. This includes robotic missions exploring and mapping the Martian environment, testing the launch vehicle and spacecraft that will take them there (the SLS and Orion), and will soon involve the deployment of the core elements of the Lunar Gateway. As this decade draws to a close, the Artemis Program will finalize things by validating all the systems and infrastructure that will allow missions to Mars in the next.

The post Want to Live on Mars? Here's Where the Water is appeared first on newsastronomy.com.