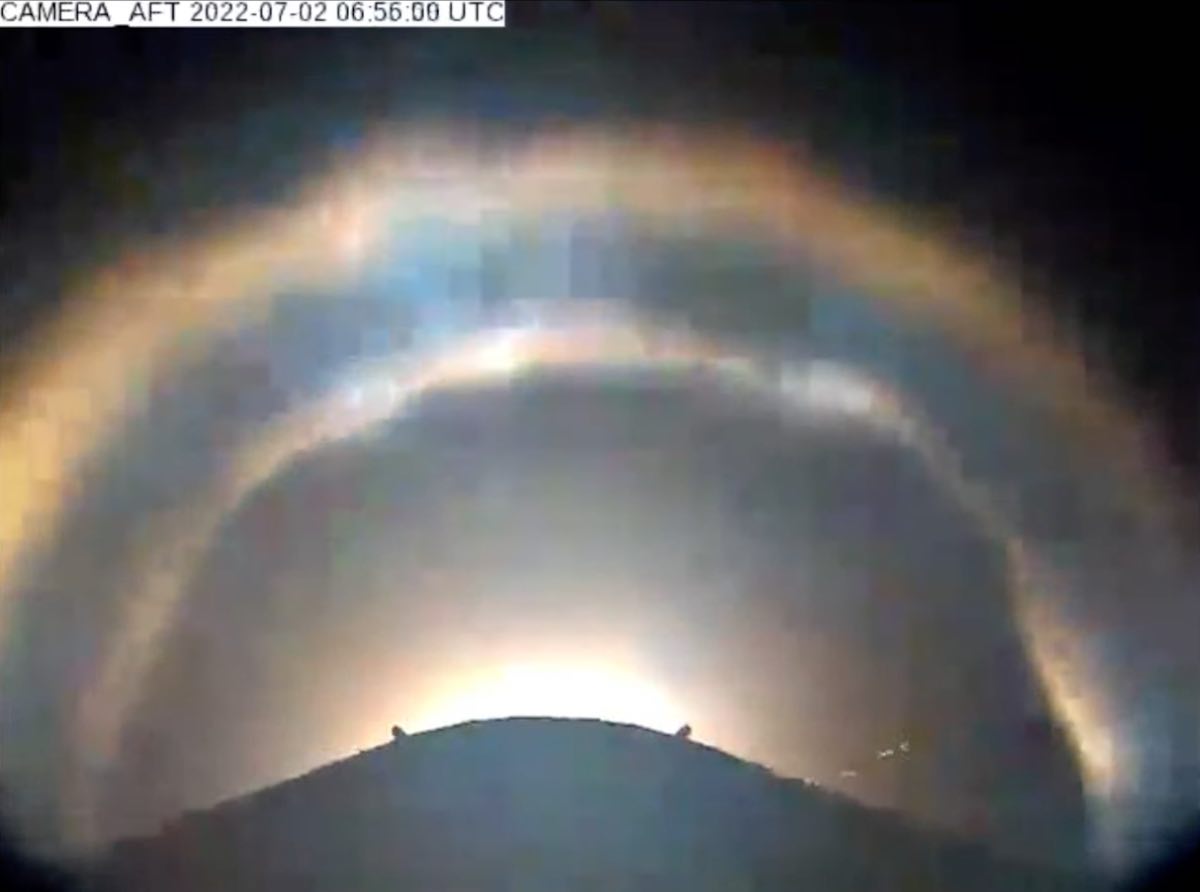 A camera on-board Virgin Orbit’s first stage captured this view of the main engine plume during the climb into space. Credit: Virgin Orbit

Virgin Orbit’s air-launched rocket carried seven small CubeSats into orbit on the company’s first nighttime mission late Friday night off the coast of California, helping clear the way for teams to base the next Virgin Orbit launch from the United Kingdom later this year.

The satellites deployed by the LauncherOne rocket will demonstrate new technologies sponsored by the U.S. military and NASA.

A flight crew consisting of two pilots and three launch engineers accompanied the rocket airborne on the modified 747 jumbo jet. The jet flew off the coast of Southern California and lined up with the mission’s southeast trajectory over the Pacific Ocean west of San Diego.

Chief pilot Eric Bippert and co-pilot Mathew Stannard pitched the carrier aircraft, known as “Cosmic Girl,” into a climb angle of nearly 30 degrees. Stannard, a pilot on loan from the UK’s Royal Air Force, sent the command to release the 57,000-pound (26-metric ton) LauncherOne rocket from a pylon under the 747’s left wing at 11:53 p.m. PDT (2:53 a.m. EDT; 0653 GMT).

Four seconds later, the rocket’s kerosene-fueled NewtonThree engine ignited with 73,500 pounds of thrust for a three-minute burn to propel the LauncherOne vehicle out of the atmosphere. A second stage NewtonFour engine took over the mission after separation of the first stage, followed less than a minute later by jettison of the payload fairing that protected the CubeSat payloads during launch preps and the early phases of the ascent into space.

The rocket reached a preliminary orbit after a five-and-a-half minute upper stage firing. A second burn of the NewtonFour upper stage engine — lasting just five seconds — placed the mission’s seven CubeSat payloads into a near-circular orbit about 310 miles (500 kilometers) in altitude, at an inclination of 45 degrees to the equator.

The CubeSat payloads began deploying from the rocket about 55 minutes into the mission.

Release! LauncherOne has dropped from the wing of the 747 carrier aircraft.

Virgin Orbit confirms ignition of the rocket’s liquid-fueled engine to power seven small CubeSat payloads into orbit for the US military and NASA.https://t.co/f8oPU5OVlP pic.twitter.com/vNZxBjbaIv

“We are honored to be supporting and delivering for the U.S. Space Force and the U.S. Department of Defense at such a critical juncture for national security space, our nation, and our world,” said Dan Hart, Virgin Orbit’s CEO. “An incredibly talented Virgin Orbit team and our LauncherOne system continue to demonstrate a track record of success for our spacecraft customers and that was confirmed again today.”

The Space Force awarded Virgin Orbit a $35 million contract in 2020 for three launches carrying Space Test Program payloads. The military calls the contract STP-S28, and the mission Friday night, known STP-S28A, was the first of the three launches contracted with Virgin Orbit.

The Space Force assigned payloads to the launch though the military’s Space Test Program, a unit that manages research and tech demo experiments in orbit. Virgin Orbit nicknamed the flight “Straight Up” in honor of a breakthrough single from singer Paula Abdul released on Virgin Records in 1988.

Two of the payloads deployed by the LauncherOne rocket are sponsored by NASA’s CubeSat Launch Initiative, in which the space agency pays for launch services for satellites research and technology demonstration satellites.

One of the NASA-supported missions is the Compact Total Irradiance Monitor-Flight Demonstration, or CTIM-FD, satellite developed at the University of Colorado Boulder. The briefcase-size satellite will demonstrate the capability for a CubeSat to host an instrument to monitor total solar irradiance, the total amount of solar energy entering Earth’s atmosphere, helping drive changes in the planet’s climate.

The instrument on the CTIM-FD satellite is about one-tenth the mass of sensors with similar capability flying on larger satellites and outside the International Space Station. 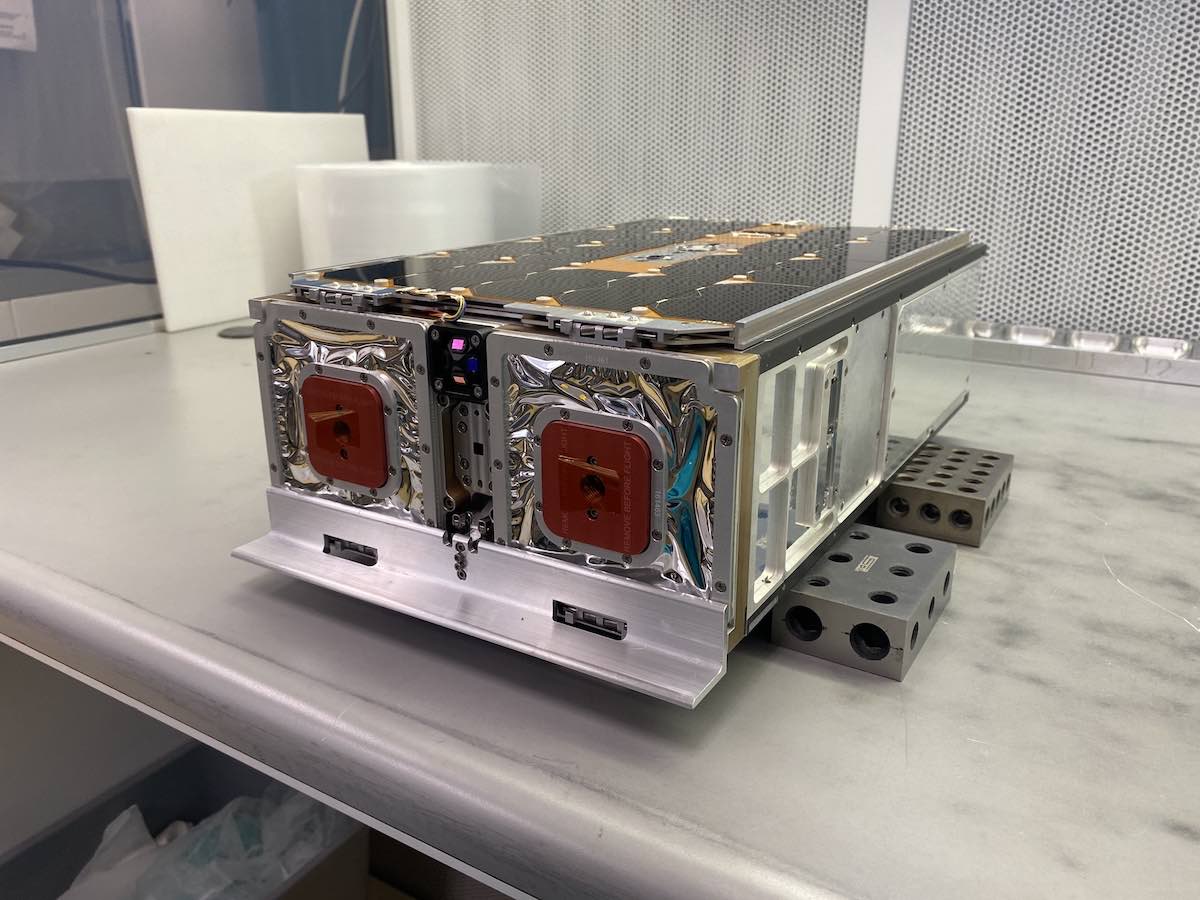 The 7.5-pound (3.4-kilogram) GPX2 satellite from NASA’s Langley Research Center will demonstrate commercial off-the-shelf GPS receivers that could be used on future small satellite missions for autonomous close-proximity operations, such as formation flying or docking.

In a scheduling coincidence, a similar satellite named NACHOS 1 deployed in orbit from a Northrop Grumman Cygnus spacecraft earlier in the week after departing the International Space Station.

The hyperspectral imagers on the NACHOS satellites have enough sensitivity to connect sulfur dioxide and nitrogen dioxide to specific volcanoes, cities, neighborhoods, and individual power plants, officials said. Hyperspectral imagers were once bulky instruments that required hosting by a larger satellite, but NACHOS is the first CubeSat to carry such an imager.

Hyperspectral instruments are tuned to resolving the chemical fingerprints of molecules, in the atmosphere or on Earth’s surface.

The U.S. Army Space and Missile Defense Command also launched the Gunsmoke-L mission on Virgin Orbit’s rocket. Gunsmoke-L is the next in a line of small Army satellites designed to support tactical military operations. Details about Gunsmoke-L’s mission are classified, but the Army has said a previous Gunsmoke mission tested technology to deliver timely overhead surveillance imagery to battlefield commanders.

Another CubeSat mission on the LauncherOne rocket was MISR-B, a modular intelligence, surveillance, and reconnaissance payload for U.S. Special Operations Command. 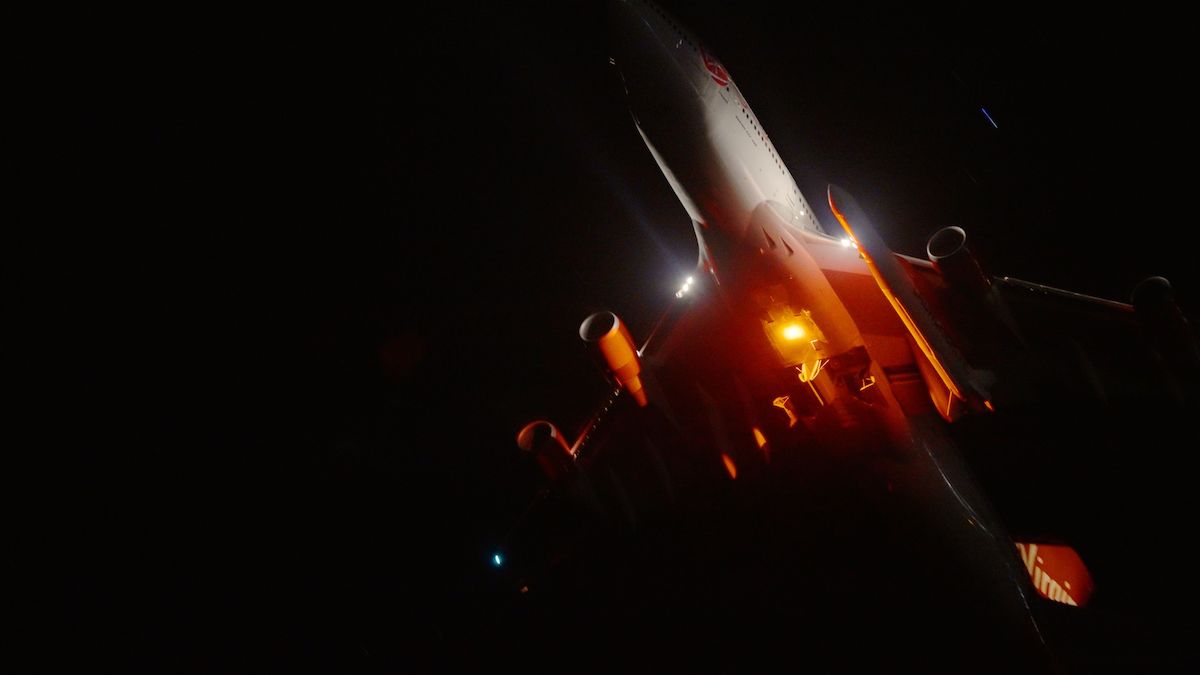 Virgin Orbit hopes the successful mission Friday night will be a springboard to ramp up he company’s launch cadence. Since the inaugural LauncherOne flight in May 2020, Virgin Orbit has averaged about one launch every six months.

In a media briefing before the most recent launch, Hart said Virgin Orbit aims for four to six missions this year. Two launches are now complete since the start of 2022.

The launch Friday night was Virgin Orbit’s first nighttime mission. Hart said team wanted to demonstrate their ability to conduct nighttime launch operations before they are required on future missions. The STP-S28A mission was not constrained to a specific launch window, and could have launched in daytime or nighttime, Hart said.

“We have some of those (night launches) on our books that are required, and we want to make sure that we do them first in our backyard here in Mojave,” Hart said in a pre-launch conference call with reporters.

One of those night missions is next on Virgin Orbit’s launch schedule, when the company will stage a mission from Newquay Airport in Cornwall. The company’s 747 carrier aircraft will release the rocket over the ocean off the coast of Cornwall, and the mission will be the first orbital-class launch based from the United Kingdom.

A suite of CubeSat payloads from the United States and the UK will ride Virgin Orbit’s rocket into a polar, sun-synchronous orbit. Virgin Orbit officials said the orbital parameters for the upcoming UK mission will require the rocket to launch at night.

Hart said before the STP-S28A mission that the first of at least two launches Virgin Orbit plans to base out of Cornwall could take off as soon as September. Earlier this year, officials hoped to launch the mission in mid-2022.

Hart said a new mission control center in Cornwall was set up to follow the STP-S28A mission, practicing for future launch operations there. Virgin Orbit is also working on a payload integration facility in Cornwall. The company builds LauncherOne rockets at its headquarters in Long Beach, California.

“All things are moving in a good direction for Cornwall,” Hart said.