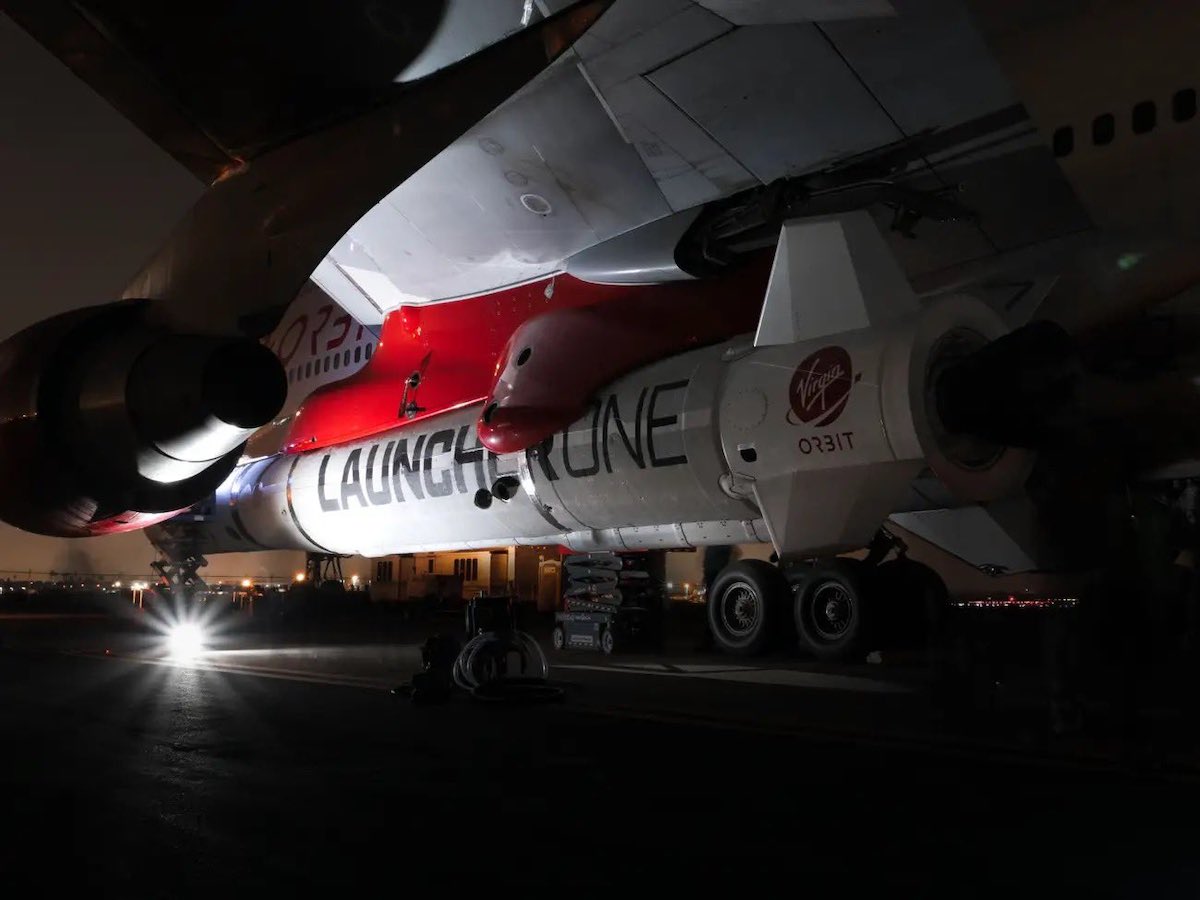 The first nighttime flight of Virgin Orbit’s commercial air-launched rocket is on track for Wednesday night off the coast of California, carrying seven small payloads into orbit on a mission for the U.S. military’s Space Test Program.

The mission will be the fifth flight of Virgin Orbit’s LauncherOne rocket. The company, founded by billionaire Richard Branson, has accomplished three consecutive successful missions since the first LauncherOne test flight failed to reach orbit.

The fifth LauncherOne mission will be the Virgin Orbit’s launch at night. The company wants to demonstrate its ability to conduct nighttime launch operations before they are required on future missions. The launch Wednesday night is not constrained to a specific launch window, and could fly in daytime or nighttime, according to Dan Hart, Virgin Orbit’s chief executive officer.

The nighttime launch is “expanding the envelope” of Virgin Orbit’s capabilities, giving the ground team and flight crew practice to run through their procedures at night.

“We have some of those (night launches) on our books that are required, and we want to make sure that we do them first in our backyard here in Mojave,” Hart said in a pre-launch conference call with reporters.

Virgin Orbit has touted the benefits of its mobile launch system, with the 747 carrier jet able to stage missions from conventional airports around the world. Alongside its home base at Mojave Air and Space Port, Virgin Orbit has agreements with international governments that could lead to launches in Japan and Brazil, and is in advanced planning for two launches based out of the United Kingdom later this year. The company has also completed preliminary planning for future missions from Guam.

The LauncherOne rocket scheduled to fire into orbit Wednesday night will carry seven CubeSat missions sponsored by the U.S. military and NASA. The launch service was purchased from Virgin Orbit through the military’s Rocket Systems Launch Program and officials from the military’s Space Test Program assigned experimental satellites to ride LauncherOne into orbit.

The two-stage LauncherOne rocket will aim to place the seven payloads — five funded by the military and two by NASA — into a 310-mile-high orbit inclined 45 degrees to the equator.

Before takeoff under the 747 carrier aircraft, the two-stage LauncherOne rocket will be loaded with kerosene and liquid oxygen propellants, then the ground team will complete hands-on checks before clearing the mission for departure. 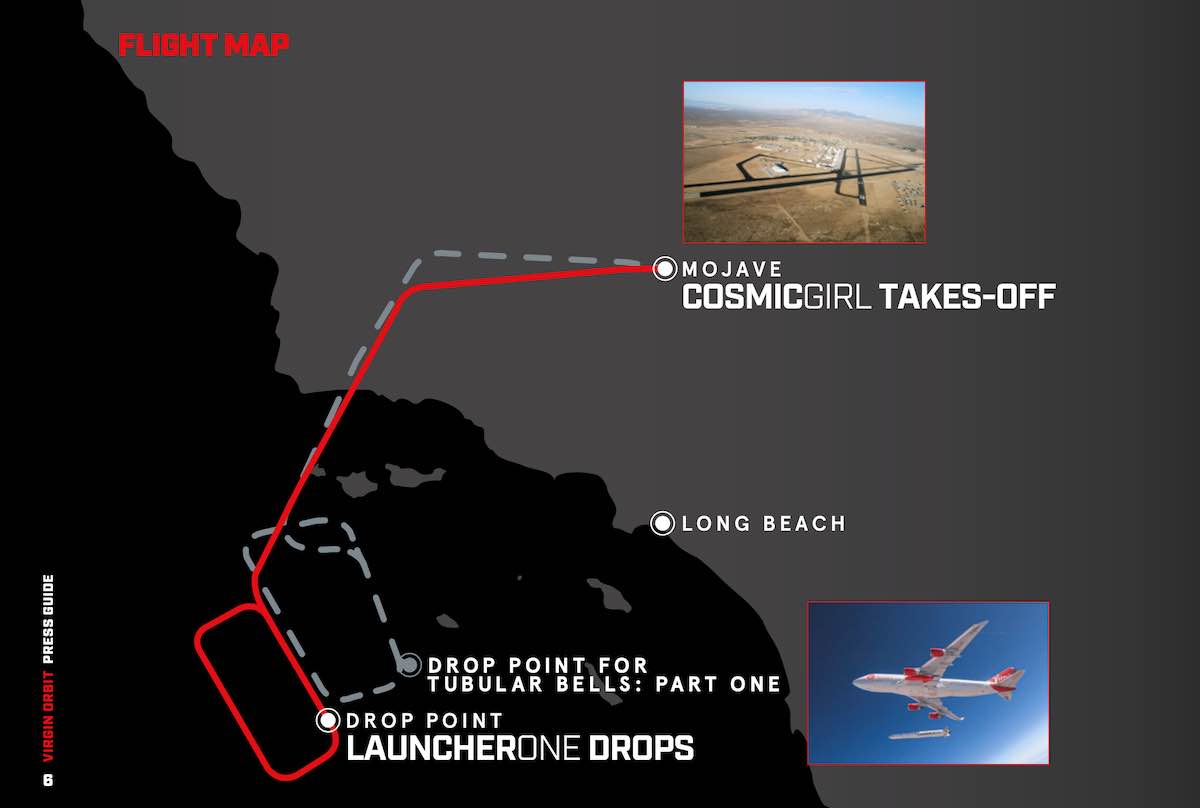 This map produced by Virgin Orbit shows the location of the rocket release point for the STP-S28A mission. Credit: Virgin Orbit

About an hour after leaving Mojave, the pilots on the 747 carrier aircraft will line up with a southeast heading, then put the jumbo jet in a climb at an angle of more than 25 degrees about 35,000 feet (10,700 meters) over the Pacific Ocean off the coast of Southern California, southwest of the Channel Islands.

The rocket’s release point is located about 210 miles (340 kilometers) west of San Diego, farther offshore than the drop location for Virgin Orbit’s first three missions. The release point and trajectory for Wednesday night’s launch are similar to Virgin Orbit’s previous launch in January, which also targeted a 45-degree inclination orbit.

Flying into a 45-degree inclination orbit requires a rocket to launch toward the southeast or northeast, trajectories not typically possible from the U.S. West Coast without flying over populated areas.

The rocket release point for Wednesday night’s flight is far enough offshore to reach the 45-degree orbit without flying over populated territory in California or Mexico. The orbit will allow the satellites to pass between 45 degrees north and south latitude on each circle around Earth.

The main engine will generate 73,500 pounds of thrust during a three-minute burn to boost the rocket out of the atmosphere. The NewtonFour second stage engine will ignite moments after jettison of the the LauncherOne booster stage, followed by separation of the payload fairing once the vehicle reaches space.

The rocket will reach a preliminary orbit after a five-and-a-half minute upper stage firing. A second burn of the NewtonFour upper stage engine — lasting just five second — is expected to place the mission’s seven CubeSat payloads into a near-circular orbit about 54 minutes into the mission.

A minute later, at approximately T+plus 55 minutes, the CubeSat payloads will begin deploying from the rocket. 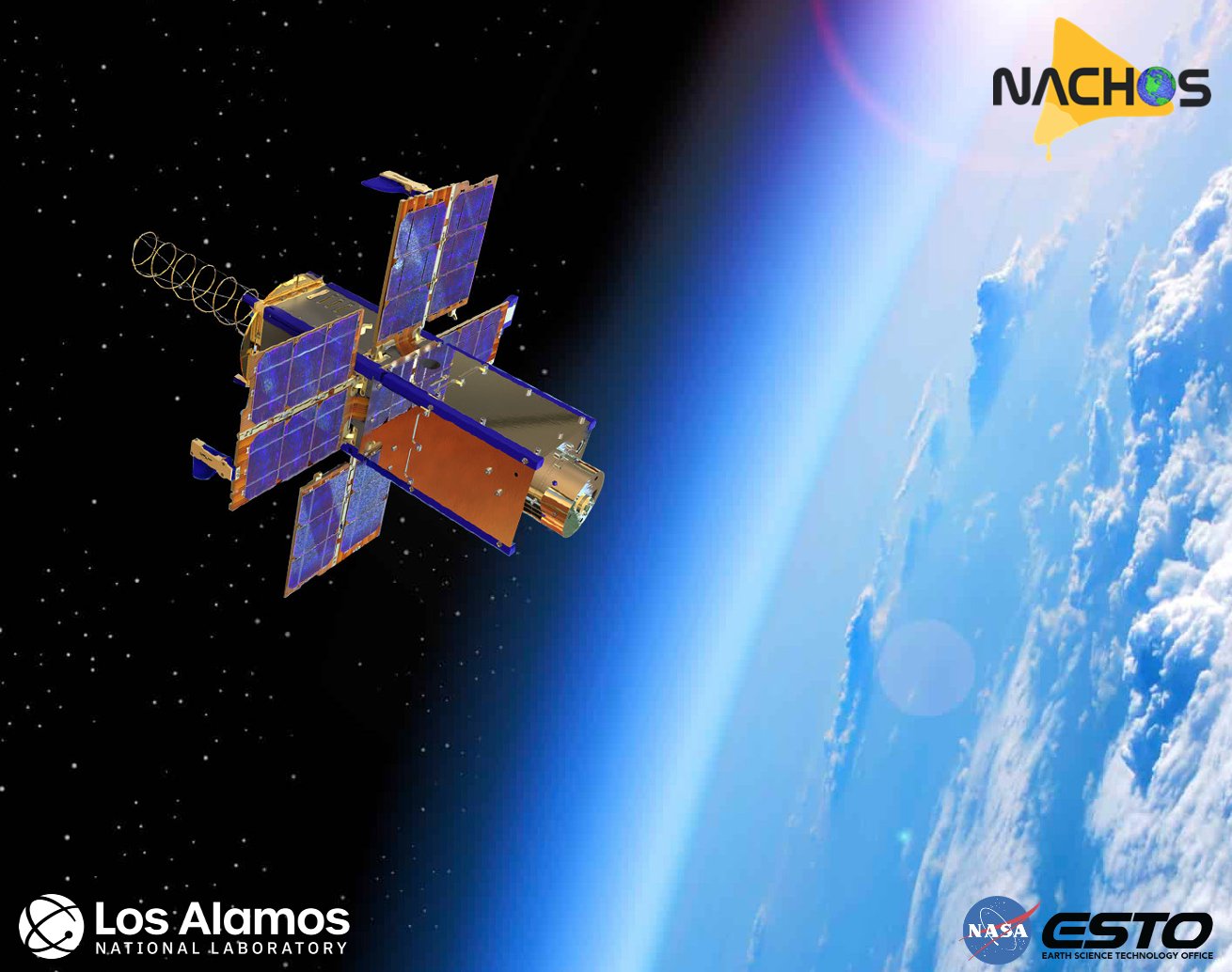 Two of the payloads are sponsored by NASA’s CubeSat Launch Initiative, in which the space agency pays for launch services for satellites research and technology demonstration satellites.

One of the NASA-supported missions is the Compact Total Irradiance Monitor-Flight Demonstration, or CTIM-FD, satellite developed at the University of Colorado Boulder. The briefcase-size satellite will demonstrate the capability for a CubeSat to host an instrument to monitor total solar irradiance, the total amount of solar energy entering Earth’s atmosphere, helping drive changes in the planet’s climate.

The instrument on the CTIM-FD satellite is about one-tenth the mass of sensors with similar capability flying on larger satellites and outside the International Space Station.

The 7.5-pound (3.4-kilogram) GPX2 satellite from NASA’s Langley Research Center will demonstrate commercial off-the-shelf GPS receivers that could be used on future small satellite missions for autonomous close-proximity operations, such as formation flying or docking.

The NACHOS 2 CubeSat from Los Alamos National Laboratory is also flying on Virgin Orbit’s LauncherOne rocket. NACHOS 2 will launch on a mission to demonstrate a new miniature imaging instrument to pinpoint sources of trace gases — natural emissions and air pollution generated by human activity — in the Earth’s atmosphere.

In a scheduling coincidence, similar satellite named NACHOS 1 deployed in orbit from a Northrop Grumman Cygnus spacecraft earlier this week after departing the International Space Station.

The hyperspectral imagers on the NACHOS satellites have enough sensitivity to connect sulfur dioxide and nitrogen dioxide to specific volcanoes, cities, neighborhoods, and individual power plants, officials said. Hyperspectral imagers were once bulky instruments that required hosting by a larger satellite, but NACHOS is the first CubeSat to carry such an imager.

Hyperspectral instruments are tuned to resolving the chemical fingerprints of molecules, in the atmosphere or on Earth’s surface.

The U.S. Army Space and Missile Defense Command is also launching the Gunsmoke-L mission on Virgin Orbit’s rocket. Gunsmoke-L is the next in a line of small Army satellites designed to support tactical military operations. Details about Gunsmoke-L’s mission are classified, but the Army has said a previous Gunsmoke mission tested technology to deliver timely overhead surveillance imagery to battlefield commanders.

Another CubeSat mission on the LauncherOne rocket is MISR-B, a modular intelligence, surveillance, and reconnaissance payload for U.S. Special Operations Command.