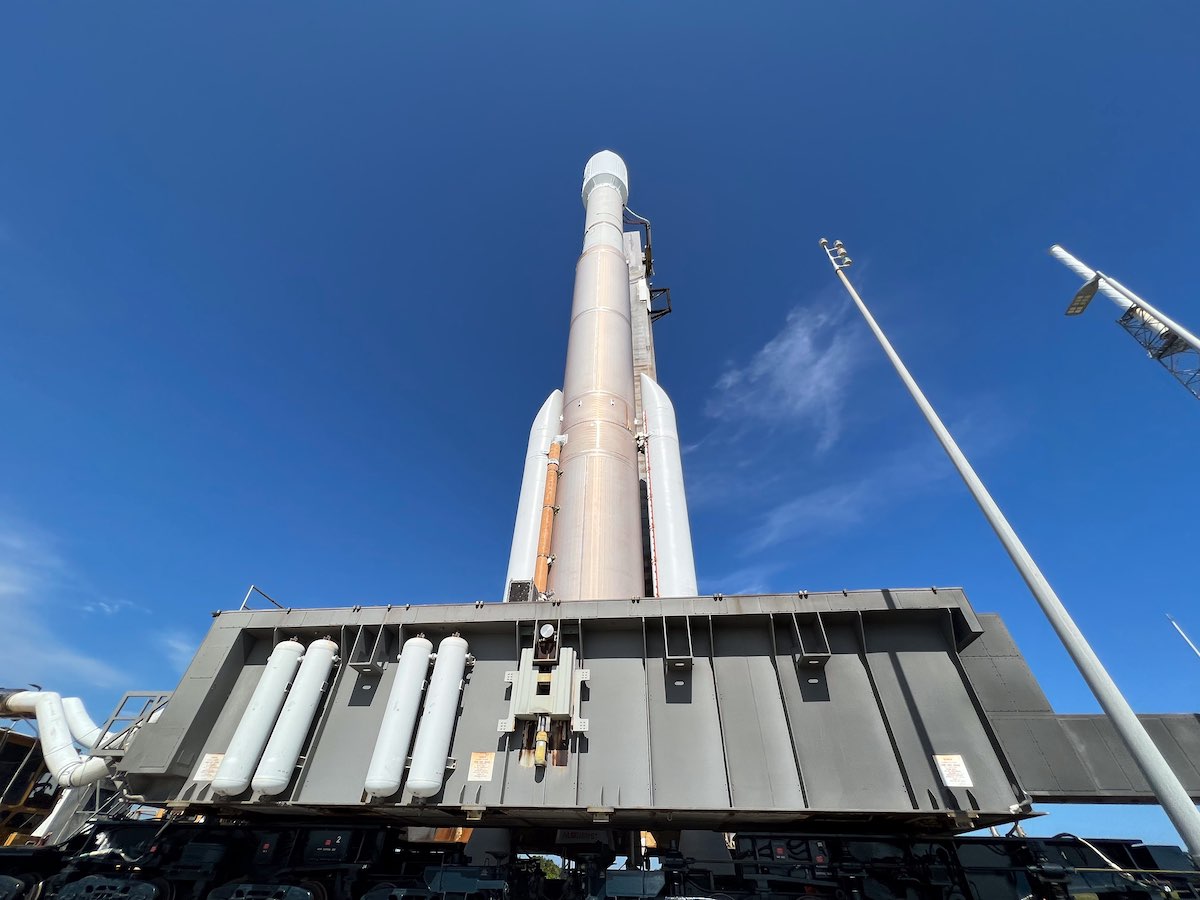 United Launch Alliance’s next Atlas 5 rocket rolled out to its launch pad Tuesday at Cape Canaveral for a fiery blastoff at dawn Thursday with a U.S. military missile warning satellite.

The 194-foot-tall (59-meter) Atlas 5 rocket completed the 1,800-foot (550-meter) rollout in a little more than an hour. The rollout began at 10 a.m. EDT (1400 GMT) Tuesday with first motion out of the Vertical Integration Facility, a 30-story-tall assembly hangar where the Atlas 5 rocket was stacked over the last month.

Two trackmobile locomotives powered the Atlas 5 rocket and its mobile launch platform — with a combined weight of 1.6 million pounds — along rail tracks from the VIF to Space Launch Complex 41 at Cape Canaveral Space Force Station.

Once in position at pad 41, the Atlas 5 was connected to propellant loading lines and other ground systems. ULA’s launch team loaded 25,000 gallons of rocket-grade RP-1 kerosene fuel into the Atlas 5’s first stage Tuesday afternoon. The kerosene will feed the rocket’s Russian-made RD-180 main engine, in combination with super-cold liquid oxygen to be pumped into the Atlas 5 during the countdown Thursday morning.

The payload for Thursday’s launch is SBIRS GEO 6, the sixth and final spacecraft in the U.S. military’s Space Based Infrared System fleet of missile warning satellites. The SBIRS satellites in geosynchronous orbit carry infrared scanning and staring sensors to detect the heat plumes from missile and rocket launches, providing commanders with advance warning of a possible missile attack.

Liftoff Thursday is set for 6:29 a.m. EDT (1029 GMT), the opening of a 40-minute launch window. There is a 70% chance of favorable weather for Thursday’s launch window, according to the Space Force’s 45th Weather Squadron. 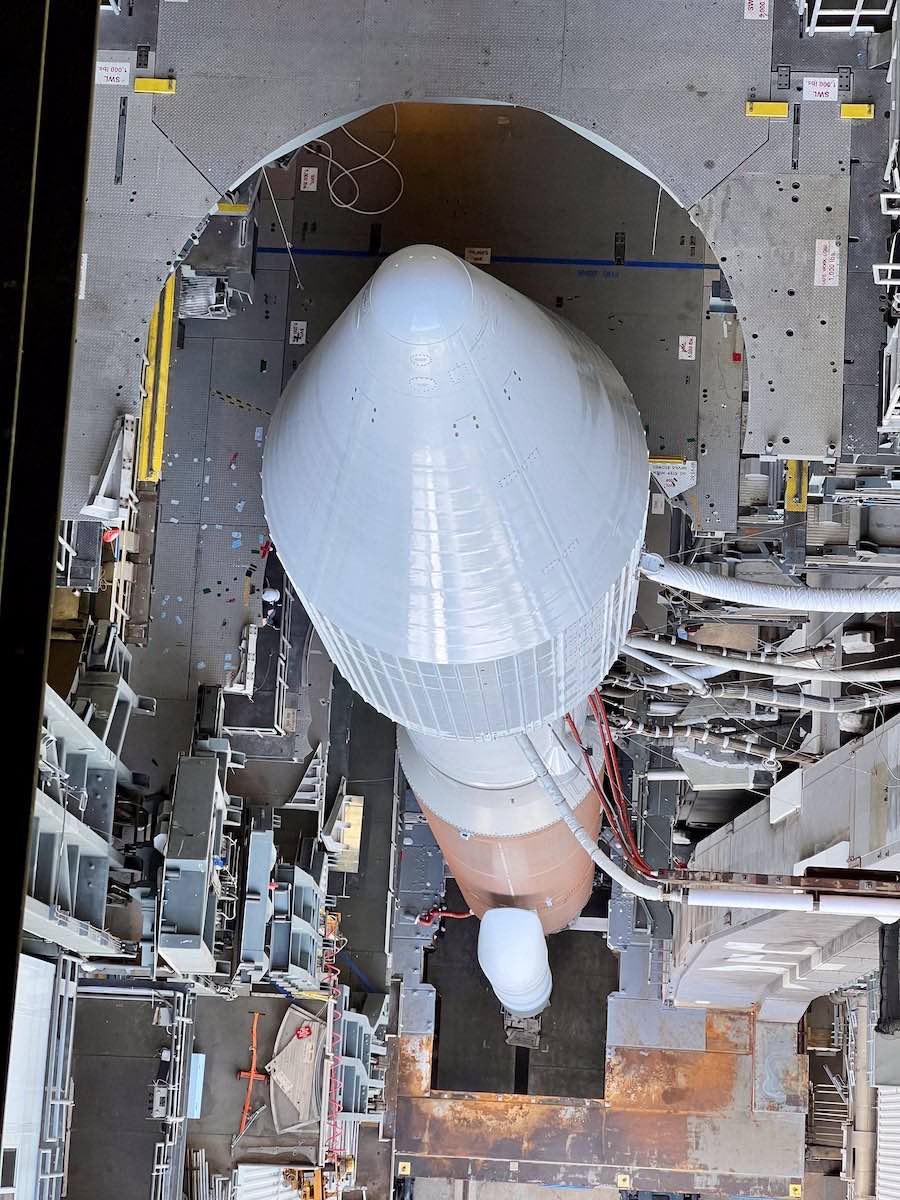 The launch Thursday will be the 95th flight of an Atlas 5 rocket, and the fifth Atlas 5 launch of the year. The launcher will fly in ULA’s “421” configuration with a 4-meter payload fairing and two strap-on solid rocket boosters supplied by Northrop Grumman. A single RL10 engine from Aerojet Rocketdyne will power the Atlas 5’s Centaur upper stage.

The SBIRS GEO 6 mission will mark the ninth and final flight of an Atlas 5 rocket in the 421 vehicle configuration. ULA is phasing out the Atlas 5 rocket and the Delta 4 rocket family. Both rockets will be replaced by the new Vulcan Centaur launcher, which ULA says is less expensive and more capable than the Atlas and Delta rocket fleets.

The Vulcan Centaur will also be powered by U.S.-made main engines produced by Blue Origin, replacing the Russian RD-180 on the Atlas 5. There are 22 Atlas 5 missions left on ULA’s launch backlog, including the SBIRS GEO 6 mission this week. ULA say all of the RD-180 engines required for the remaining Atlas 5 flights have been delivered to the United States from Russia.

The SBIRS GEO 6 satellite set to ride the Atlas 5 rocket into space Thursday was built by Lockheed Martin.

The Space Force says the SBIRS GEO 6 mission costs $1.2 billion. The new satellite is the last of the SBIRS consellation, and will ensure the fleet of military missile warning satellites continues to provide worldwide coverage until the launch of the first next-generation geosynchronous missile detection spacecraft in 2025.

The Atlas 5 rocket launching the SBIRS GEO 6 mission will head east from Cape Canaveral, powered by 1.6 million pounds of thrust from its RD-180 engine and two strap-on boosters. The launcher’s two solid rocket boosters will consume their pre-packed propellant in about a minute-and-a-half, then jettison to fall into the Atlantic Ocean at T+plus 2 minutes, 13 seconds.

The first stage’s Russian-made RD-180 main engine will shut down at T+plus 4 minutes, 12 seconds, followed by stage separation six seconds later. The hydrogen-fueled RL10 engine on the Centaur upper stage will ignite at T+plus 4 minutes, 28 seconds, for the first of three firings to place the SBIRS GEO 6 spacecraft into an elliptical, or oval-shaped, transfer orbit. 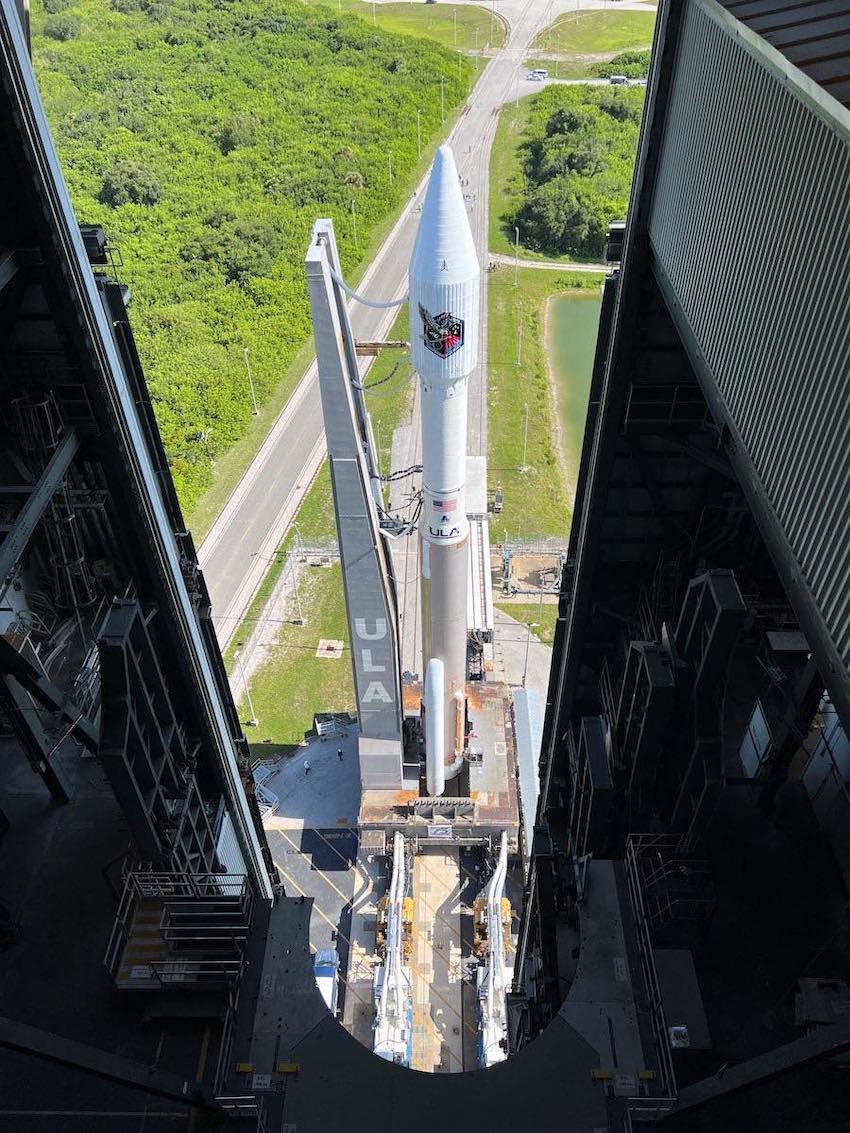 After cutoff of the Centaur’s first burn at T+plus 12 minutes, 55 seconds, the rocket will coast for about 10 minutes before reigniting the RL10 engine at T+plus 22 minutes, 54 seconds, for a burn lasting nearly five minutes.

The Centaur upper stage with the SBIRS GEO 6 satellite will then be in an elliptical transfer orbit and will gain altitude until the RL10 engine starts again for a final 58-second burn nearly three hours into the mission. Deployment of the roughly 10,700-pound (4,850-kilogram) SBIRS GEO 6 spacecraft is scheduled at T+plus 3 hours, 1 minute.

Two small secondary payloads were originally assigned to launch with the SBIRS GEO 6 satellite, but the Space Force removed those experimental rideshare spacecraft from the mission after delays in the launch date. The small rideshare satellites “fell out of predicted orbital debris mitigation compliance” guidelines that the Space Force follows for its missions, said John Steinmeyer, the SBIRS GEO 6 mission director at Space Systems Command.

The SBIRS GEO 6 spacecraft will extend its solar panels, and an on-board propulsion system will steer the satellite to a circular geosynchronous orbit that is continuously at an altitude of nearly 22,300 miles over the equator. In that orbit, the satellite’s velocity will be fixed with the rate of Earth’s rotation, giving the craft’s infrared early warning sensors a constant view of the same part of the planet.

The satellite is designed for a 12-year mission. SBIRS GEO 5, which launched last year, and SBIRS GEO 6 are based on an upgraded Lockheed Martin “combat bus” design that is more hardened against cyber threats, offers additional spacecraft power, and has enhanced propulsion and electronic systems.

ULA trajectory analysts developed a modified launch profile for the SBIRS GEO 6 mission to place the satellite into an orbit closer to its final operational altitude and inclination. That additional third firing by the RL10 engine, made possible by shortening the Centaur upper stage’s first burn, will result in lower fuel usage on the SBIRS GEO 6 satellite during its own orbit-raising maneuvers.

That translates to a longer operating lifetime and gives the SBIRS GEO 6 spacecraft the ability to use its fuel to move to different geographic coverage zones around the world. 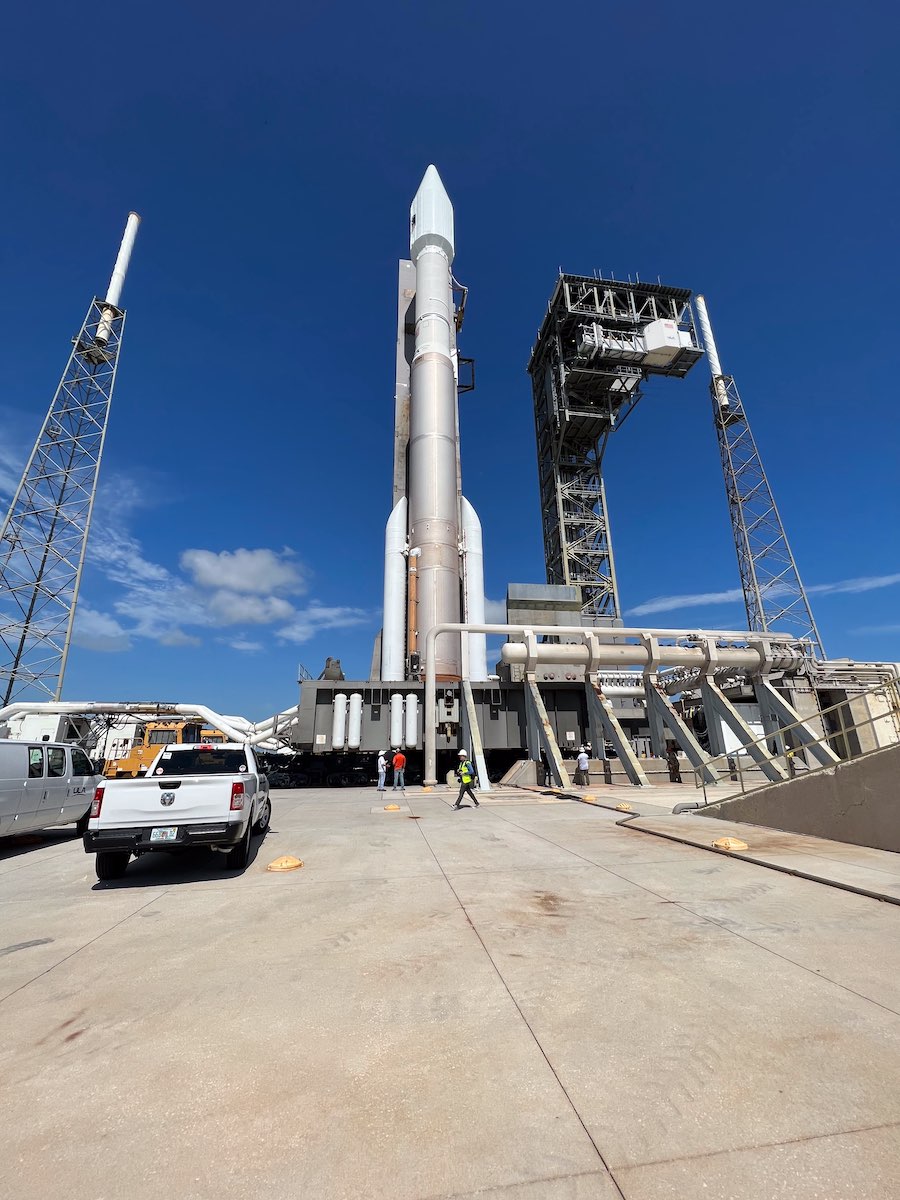 The launch this week will also mark the return to service of the newest variant of the RL10 engine on the Centaur upper stage, an engine family that dates back to the 1960s.

The hydrogen-fueled RL10C-1-1 engine offers improved performance and is easier to build than previous RL10s. It comes with a 3D-printed injector and can be fitted with a larger 33-inch nozzle extension for better efficiency when operating in the airless vacuum of space.

The RL10C-1-1 engine first flew last year on the SBIRS GEO 5 mission. The engine completed its job to place the mission’s payload into the proper orbit, but the 33-inch nozzle extension on the engine bell began vibrating, or ringing, when it was firing.

Gary Wentz, ULA’s vice president of government and commercial programs, said Monday the RL10C-1-1 engine will fly its second mission with the SBIRS GEO 6 launch. ULA is flying a smaller 22-inch nozzle extension on this launch, the same size hardware used on past Atlas 5 flights.

“Other than that, there we no changes,” Wentz said.