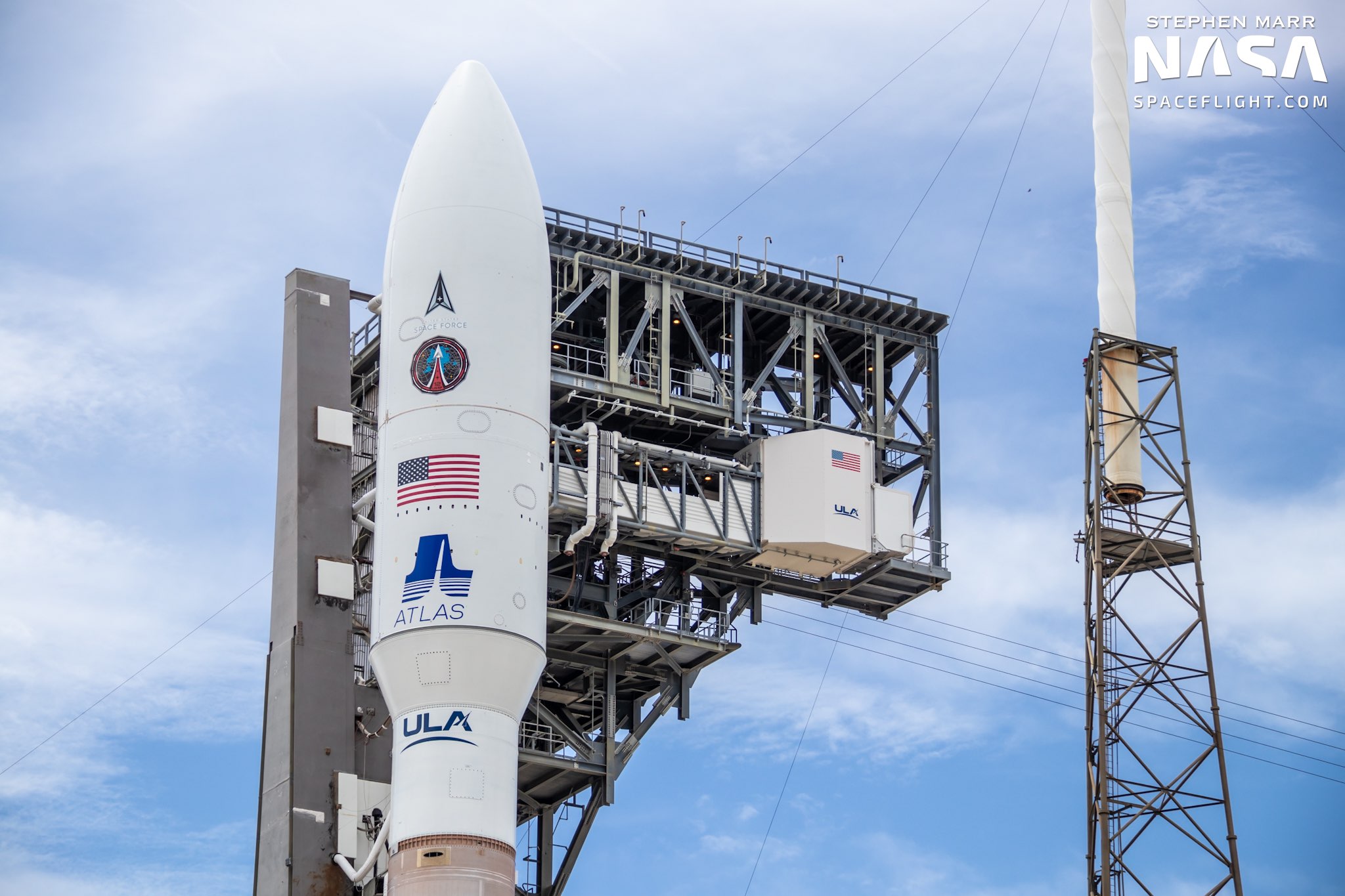 United Launch Alliance will deploy a pair of Space Force technology demonstration payloads using its Atlas V rocket Thursday. The USSF-12 mission is due for liftoff from Cape Canaveral during a two-hour window that opens at 6:00 PM EDT (22:00 UTC).

United States Space Force 12 (USSF-12) consists of two satellites that will help the Space Force to test and develop systems for future national security space missions. The Wide Field of View (WFOV) satellite will test an infrared sensor to be used on the next generation of missile detection satellites, while the USSF-12 Ring utilizes a free-flying propulsive EELV Secondary Payload Adapter (ESPA) to carry additional research payloads for the Space Test Program.

WFOV will be operated by Space Force’s Space Systems Command. It was constructed by Boeing’s Millennium Space Systems subsidiary, based on the Aquila M8 platform, and has a mass of around 3,000 kilograms. It carries a 200-kilogram infrared imaging system, the Wide Area Six-Degree Payload (WASP), built by L3Harris Technologies.

Missile detection and early warning satellites play a vital role in the defense of the United States and its allies. These sentinels keep a constant watch over the planet with powerful infrared sensors attuned to detect the exhaust plumes of missiles. Their first duty is to detect that a launch has taken place, before tracking the missile to help characterize its course and identify the type of missile that has been fired.

Using space-based sensors allows the maximum possible warning of an incoming missile, giving time for defensive precautions and countermeasures to be employed against the threat and for a nuclear counterattack to be launched if necessary.

The US began experimenting with missile detection satellites with the Missile Defense Alarm System (MIDAS) program of the early 1960s, which used satellites in low Earth orbit. This was succeeded by the geostationary Integrated Missile Early Warning System (IMEWS), later renamed the Defense Support Program (DSP). A total of 23 DSP satellites were deployed between 1970 and 2007, serving as the eyes of the American missile defense network for much of the Cold WaIn

In 2011, DSP began to be replaced with the current-generation Space-Based Infrared System (SBIRS). Five SBIRS satellites are currently in geostationary orbit, with a sixth due to join them soon: it will be the payload for the next Atlas V mission after Thursday’s launch, currently slated to lift off at the end of July. SBIRS augments these satellites with sensors hosted on National Reconnaissance Office (NRO) satellites in elliptical Molniya orbits to provide better coverage of Earth’s poles.

The launch of SBIRS-GEO-6 in July is expected to be the last for this program, with the successor Next-Generation Overhead Persistent Infrared (NG-OPIR) system slated to replace it. The first NG-OPIR launch is currently slated for no earlier than 2025, but this will be refined as development continues. 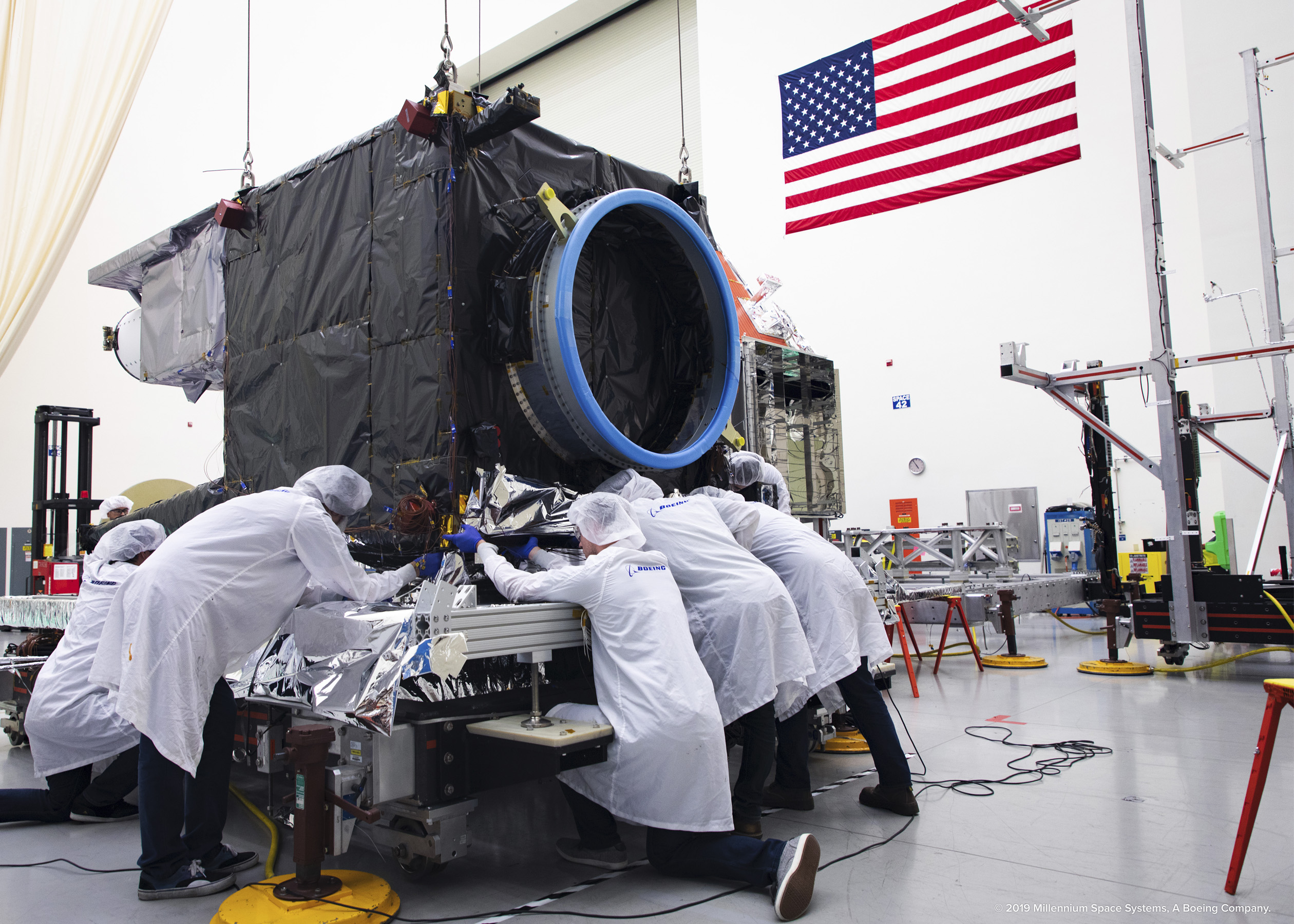 The WFOV mission is an important stepping stone for NG-OPIR, as it will provide on-orbit testing of sensor systems to help mitigate the risks of new technology and operational techniques being developed for the NG-OPIR project. The primary goal of WFOV is to demonstrate that its sensor can simultaneously perform a strategic mission – watching for missile launches across its field of view – while also focusing on narrower targets of tactical significance. In doing so it will demonstrate techniques and algorithms that will be vital to the success of the future NG-OPIR missions.

WFOV is not part of the Space Development Agency’s Tracking Layer constellation, another experimental missile detection system scheduled to launch in the near future which includes several satellites named Wide Field of View. Given that L3Harris, the manufacturer of the USSF-12 WFOV’s infrared payload, is the prime contractor for four of the Tracking Layer satellites, however, it is likely that there will be some similarities and potentially shared equipment.

Unlike WFOV, few details about the USSF-12 Ring have been made public, other than its use of the propulsive ESPA ring developed by Northrop Grumman. The satellite will be operated by the Space Test Program, an agency under the US Department of Defense that carries out research and development of new space systems for future military applications. Previous ESPA-derived spacecraft have deployed additional subsatellites after launch, although it is not clear whether this will be an element of the USSF-12 Ring’s mission. 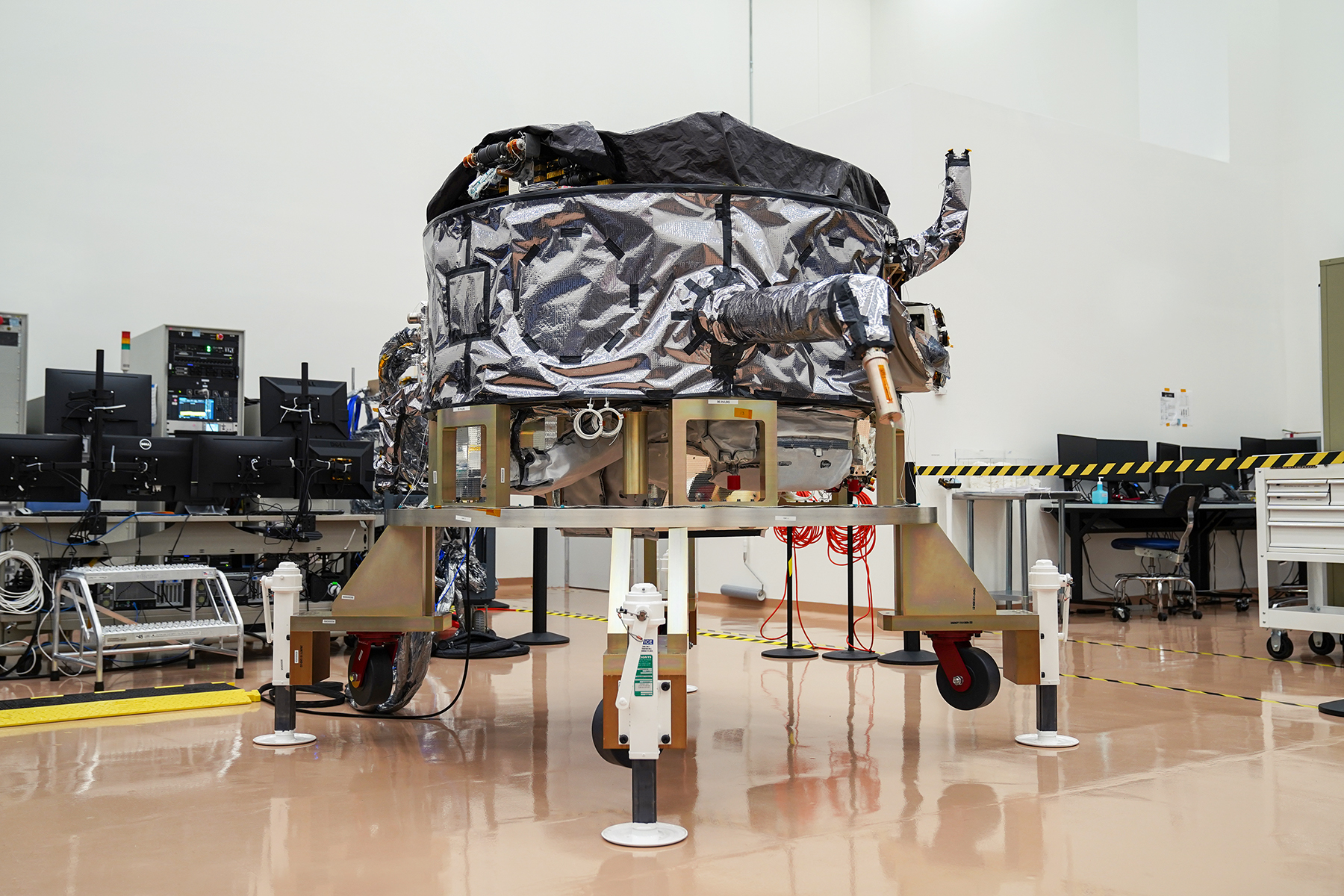 A Northrop Grumman propulsive ESPA ring, similar to the one being launched on USSF-12, being prepared to launch with the USSF-106 mission no earlier than 2023. (Credit: Northrop Grumman)

The USSF-12 mission will launch aboard an Atlas V rocket, operated by United Launch Alliance (ULA). First flown in 2002, the Atlas V has been a workhorse for the US government’s military and scientific space missions across its first twenty years of service. Originally developed by Lockheed Martin for the US Air Force’s Evolved Expendable Launch Vehicle (EELV) program, Atlas was selected for development alongside Boeing’s Delta IV – which is now also operated by ULA.

The EELV program sought to procure new rockets to replace the earlier versions of Atlas and Delta then in service, as well as the Titan family of rockets. It has since been transferred to Space Force and renamed National Security Space Launch (NSSL) to reflect the rise of reusable rockets – such as SpaceX’s Falcon 9 and Heavy – in recent years.

ULA is currently developing a new rocket, Vulcan, which will replace both Atlas V and Delta IV. This is currently expected to make its debut later this year and is one of two rockets selected for the next phase of the NSSL program, alongside Falcon.

Atlas V itself is a two-stage rocket, with a Common Core Booster (CCB) first stage and a Centaur upper stage. Different configurations vary the number of strap-on solid rocket motors (SRMs) that augment the first stage during the initial phase of flight, the size of the rocket’s payload fairing, and the number of engines on the Centaur stage. For USSF-12 Atlas is flying in its 541 configuration, which means a five-meter diameter payload fairing, four solid rocket motors, and a single-engine Centaur (SEC). 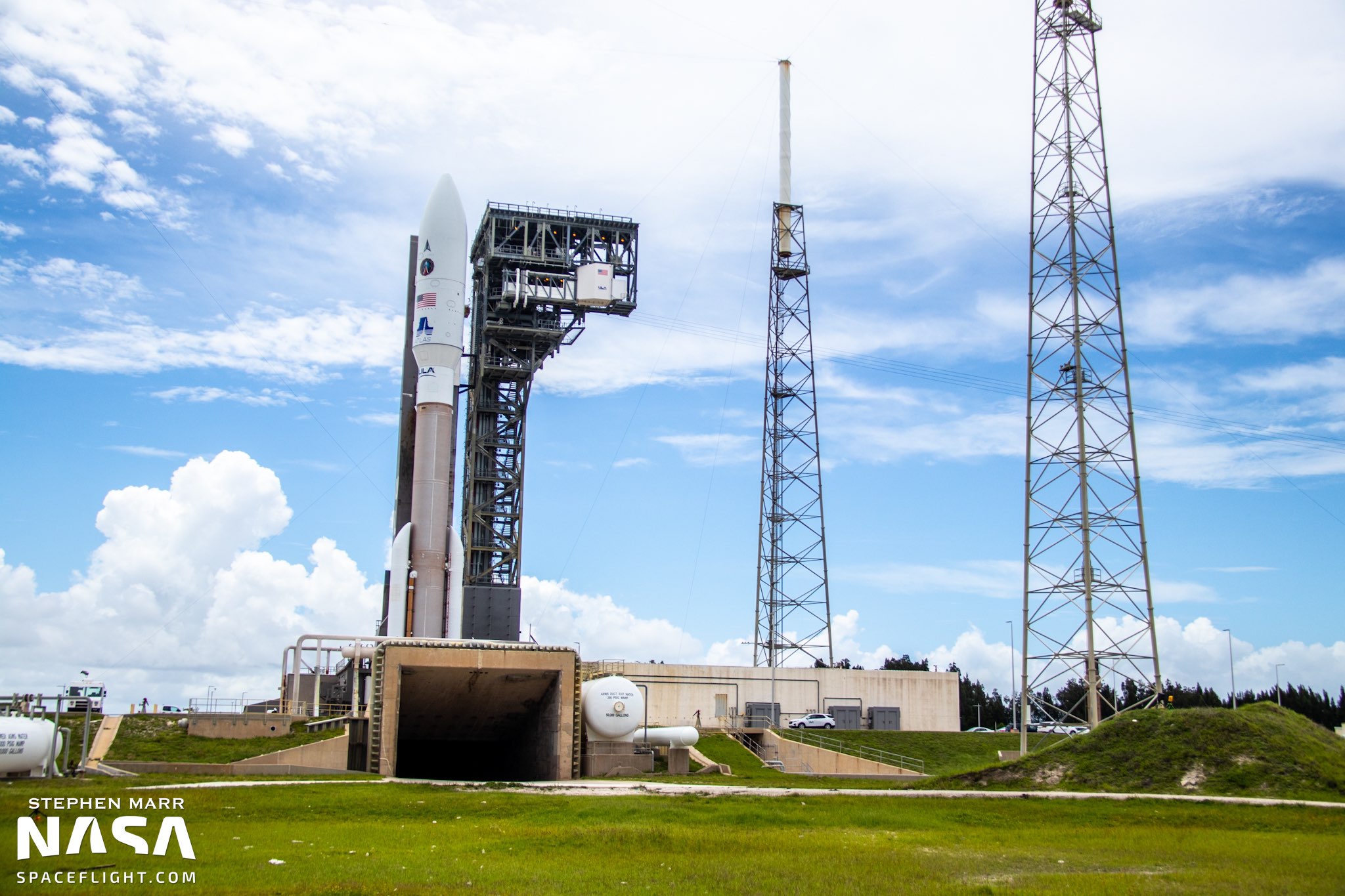 Atlas V on the pad at SLC-41 before launch. (Credit: Stephen Marr for NSF)

This represents the second-most-powerful version out of the Atlas V configurations that have flown and will allow Centaur to insert its payloads directly into near-geostationary orbit. The unique tail number for the rocket that will fly the USSF-12 mission is AV-094.

Atlas will lift off from Space Launch Complex 41 (SLC-41) at the Cape Canaveral Space Force Station. Originally a Titan launch pad, SLC-41 has been the East coast home of Atlas V since its introduction and is due to continue in service with ULA for decades to come as the company transitions over to Vulcan. AV-094 was stacked atop a mobile launch platform within the Vertical Integration Facility (VIF) and then rolled into position at the launch pad for liftoff.

The Common Core Booster is powered by a single RD-180 engine. This will ignite at the T-1 second mark in the countdown, with liftoff occurring at T+1 second. Four GEM-63 solid rocket boosters will fire alongside the RD-180 for the first 98 seconds of flight, providing additional thrust as Atlas ascends through the dense lower regions of the Earth’s atmosphere.

After lifting off, AV-094 will begin a series of pitch and yaw maneuvers to put itself on course for geostationary orbit. The first of these will take place 6.9 seconds into the flight, as the rocket assumes an easterly track to minimize its orbital inclination. It will take about 57.8 seconds for the rocket to reach Mach 1, the speed of sound. Less than ten seconds later AV-094 will pass through the area of maximum dynamic pressure, Max-Q.

Although the SRMs only burn for about 98 seconds, they will remain attached for about ten seconds after burnout. At one minute, 48 seconds, mission elapsed time the spent boosters will separate and fall away from the vehicle. 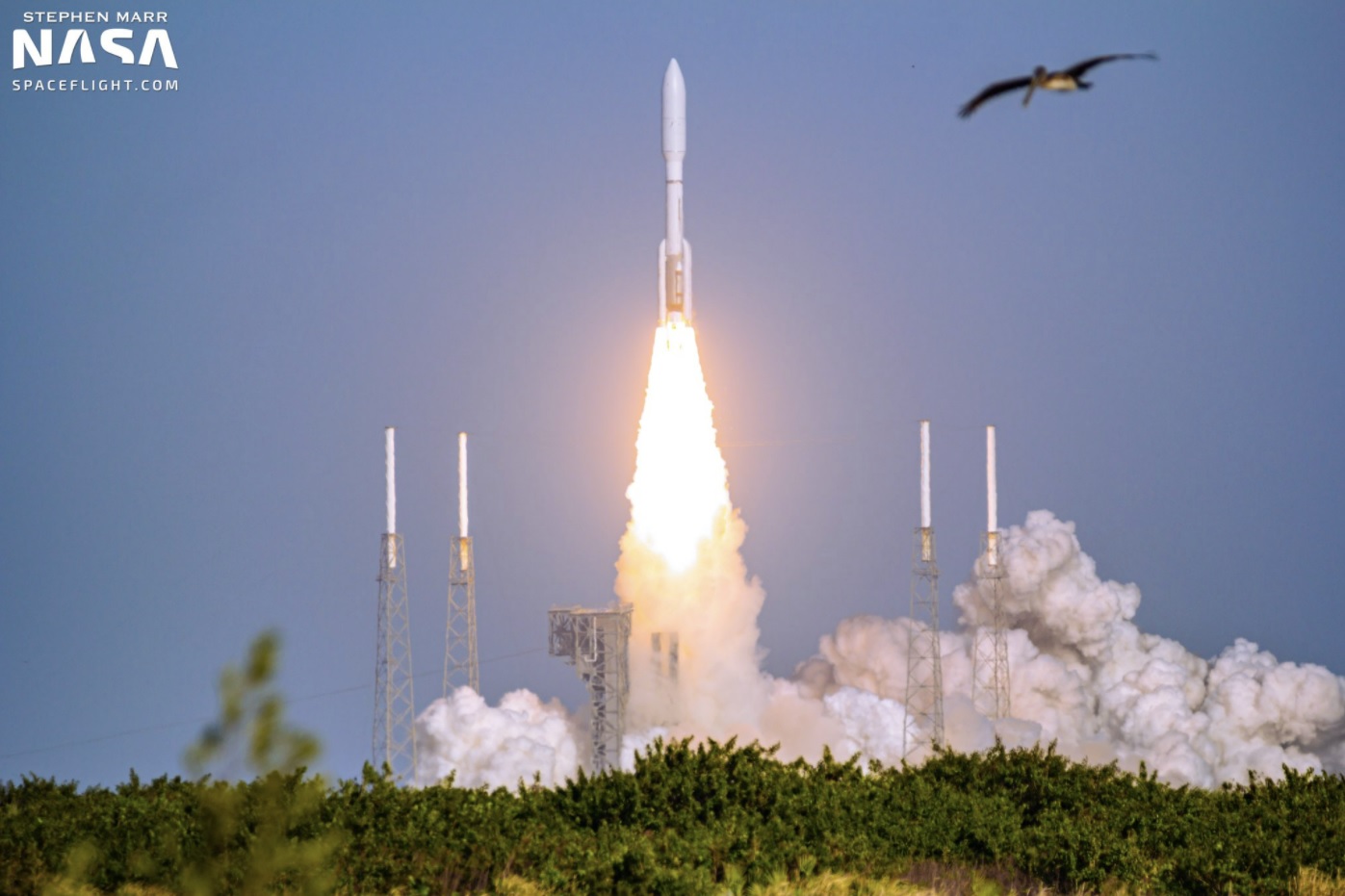 Three minutes and 26 seconds after liftoff the payload fairing, which encloses the satellites and the Centaur upper stage and provides protection during the climb through the atmosphere, will be jettisoned. Shortly after fairing separation, the forward load reactor will separate from the forward end of Centaur.

The RD-180 will continue to power the CCB until Booster Engine Cutoff (BECO) at the four-minute, 24-second mark in the mission. At BECO the CCB shuts down its engine in preparation for stage separation, which will occur six seconds later. Centaur’s RL10C-1 engine will begin its prestart sequence, igniting ten seconds after separation to begin the first of three planned burns.

While the first stage burns RP-1 kerosene and liquid oxygen (LOX), Centaur uses cryogenic liquid hydrogen and LOX. Its first burn will last six minutes and 18 seconds, putting the upper stage and payloads into an initial parking orbit. Twelve minutes and 15 seconds later it will restart for a second burn, firing its engine for five minutes and 28 seconds to reach geosynchronous transfer orbit (GTO).

For many launches, GTO is the final destination for the rocket, with the payloads then released to make their way into their operational orbits. On Thursday’s mission, however, the additional power provided by the Atlas V 541 rocket will allow a direct insertion to be made into geostationary orbit. This will require a third burn to be made at the apogee – or highest point – of the transfer orbit, so the mission will enter an extended coast phase lasting five hours, 15 minutes, and 12 seconds.

Centaur’s final burn will two minutes and 26 seconds, circularizing the orbit and zeroing out its inclination. Three minutes and 16 seconds after its conclusion, WFOV will be deployed into a near-geostationary orbit with a perigee of 36,106 km (22,435 mi, 19,496 nmi), an apogee of 36,168 km (22,473 mi, 19,529 nmi) and inclination of 0.0 degrees. Once WFOV has separated, Centaur will reorient itself and jettison the booster adaptor.

The USSF-12 ring will separate into a 36,167 by 36,323 km (22,473 x 22,570 mi, 19,529 x 19,613 nmi) orbit 15 minutes and 45 seconds after WFOV’s deployment. About 26 minutes and 20 seconds later Centaur will perform a blowdown to help passivate itself, reducing the risk of an on-orbit explosion since deorbiting the stage is not possible with Thursday’s mission profile. The launch mission will officially end at seven hours, six minutes and 41 seconds elapsed time.

Thursday’s launch is the fourth of 2022 for United Launch Alliance and its Atlas V rocket, following six weeks to the day after the successful liftoff of the rocket’s previous launch, the OFT-2 mission for Boeing’s Starliner spacecraft. USSF-12 had been scheduled to launch before Starliner but was delayed from a planned April launch date at the Space Force’s request, for undisclosed reasons.

ULA’s next scheduled Atlas V mission will also contribute to America’s missile defense capabilities, as it is due to deploy the SBIRS-GEO-6 satellite: the final planned member of the current-generation SBIRS missile detection constellation. That launch is presently slated for 31 July.

(Lead photo: Atlas V on the pad at SLC-41 with the USSF-12 payloads before launch. Credit: Stephen Marr for NSF)