Humanity seems destined to expand into the Solar System. What exactly that looks like, and how difficult and tumultuous the endeavour might be, is wide open to speculation. But there are some undeniable facts attached to the prospect.

We need materials to build infrastructure, and getting it all into space from Earth is not realistic. (Be quiet, space elevator people.)

Asteroid mining is one of those things that’s been talked about for decades but hasn’t happened. That doesn’t mean it won’t happen; in fact, we’ll have to use resources that are already in space if we want to establish a real presence anywhere other than Earth. 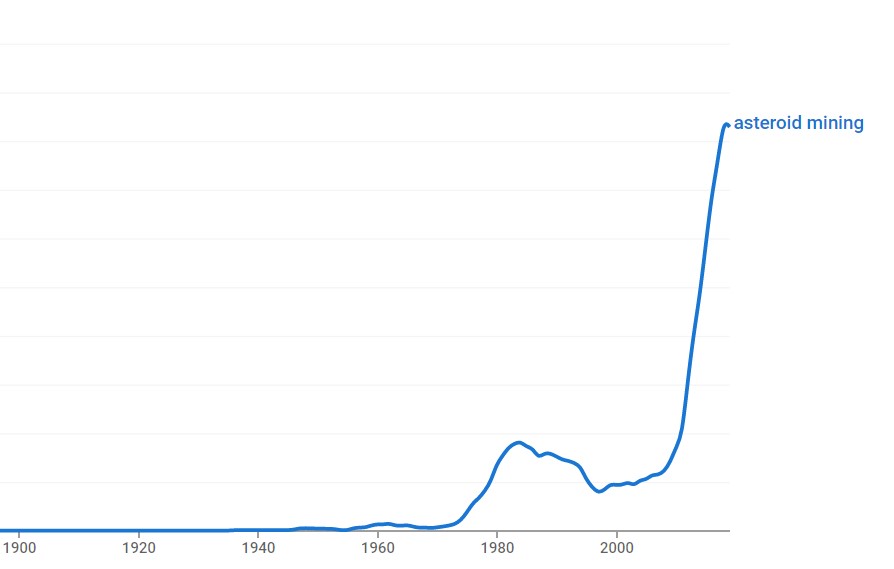 Google Ngram viewer shows how often a word or phrase was used in published works. The first asteroid was discovered in 1801, and “asteroid mining” started appearing shortly after WW2. Almost everybody’s heard of it now. Image Credit: Google Ngram.

There are enormous resources available in asteroids, especially in the Main Asteroid Belt. But Near Earth Asteroids (NEAs) also hold vast quantities of water, metals, and volatiles. There are more than 26,000 NEAs, and they could play a key role in humanity’s space-faring future. The problem is, even though they’re termed Near Earth Asteroids, they’re not that accessible. So lots of the talk around asteroid mining involves moving asteroids into more advantageous and accessible orbits.

We’ve learned a lot about the asteroid population in recent decades, especially in the last two decades. In fact, in 2005, Congress asked NASA to catalogue dangerous objects and to find at least 90 percent of potentially hazardous NEOs sized 140 meters or larger by the end of 2020. 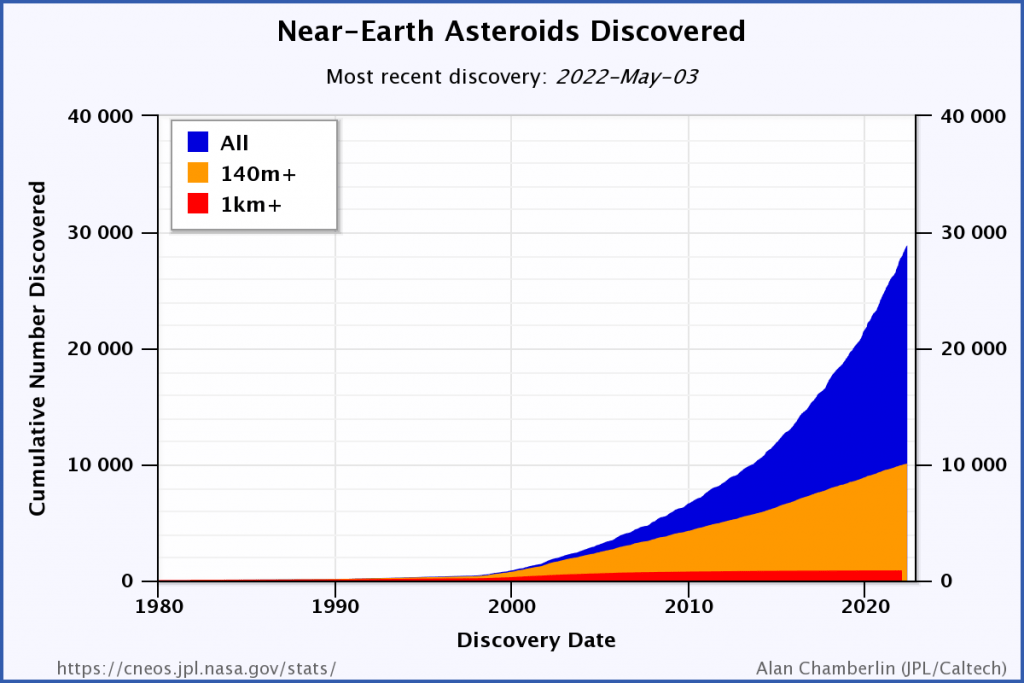 NASA has catalogued thousands of asteroids in the past couple of decades. Image Credit: By Alan B. Chamberlin – Jet Propulsion Laboratory, NASA http://neo.jpl.nasa.gov/stats/, Public Domain, https://commons.wikimedia.org/w/index.php?curid=24306117

We’ve also come to understand asteroid composition better, and scientists have categorized asteroids into types based on composition. The three types are C-Type, M-Type, and S-Type, meaning carbonaceous, metallic, and silicaceous. They’re also grouped by their orbits, and by families, with each member of a family coming from the same parent body.

We’ve also sent spacecraft to study and sample asteroids, which is akin to prospecting here on Earth, though the sampling is aimed more at science than at resource exploitation. JAXA (Japan Aerospace Exploration Agency) and NASA have both launched successful asteroid sample return missions. JAXA has returned samples to Earth, and the sample from NASA’s OSIRIS-REx is on its way.

So we understand asteroids’ composition and their orbits, and we’ll continue to catalogue them and study them. We’ll probably continue to sample them, and NASA has taken its first tentative steps in changing an asteroid’s path by redirecting one with a kinetic impact. It seems certain that we’ll want to bring one closer to Earth and use its resources for our needs.

A new study suggests a unique way of shifting asteroids around and moving them into more advantageous orbits. The title is “A multiple-vehicle strategy for near-Earth asteroid capture,” and it’s published in the journal Acta Astronautica. The lead author is Livia Ionescu from the James Watt School of Engineering at the University of Glasgow.

In their paper, the authors compare their two-spacecraft proposal to other proposed methods using a single spacecraft. According to them, their method is superior.

The team’s analysis shows that their dual-spacecraft method is superior. “Results show that the two-spacecraft strategy is capable of returning more asteroid mass and often at a lower mission duration,” they write. Of course, it’s not quite that simple.

The team analyzed their proposal in three ways. They looked at asteroids following co-planar orbits and circular orbits, they analyzed a set of fictional near-Earth asteroids to create a large data set, and they analyzed some real asteroids as mission targets.

Then the team examined two scenarios to compare single-spacecraft missions with two-spacecraft missions. Each scenario is considered in terms of Delta V. Delta V measures how much acceleration is required to move an object, in this case spacecraft and asteroids. Delta V is the heart of the issue, but so is the amount of mass returned.

“The analysis showed that the two-spacecraft strategy does not impact the required Delta V in a beneficial manner,” the paper states. “However, the aim of an asteroid capture mission is to retrieve useful mass to the vicinity of the Earth.”

This schematic from the paper shows the Delta Vs for a single-spacecraft (a) and two-spacecraft (b) capture of a single asteroid. There’s no Delta V advantage for the two-spacecraft method, but that method returns more mass. Image Credit: Ionescu et al. 2022

But the results presented so far are based on asteroids that have the same mass and that have fairly simple orbits. That, of course, isn’t realistic, so the team dug deeper.

The deeper analysis looked at artificially-generated NEAs with random but realistic elements to their orbits. “Therefore, in this section, the orbital elements of the asteroids will be randomly generated within specified ranges in order to generate statistical data on the relative performance of the one-spacecraft and two-spacecraft strategies,” the authors write.

In this deeper analysis, the mission architectures remain the same. In the single-spacecraft model, the spacecraft travels to an asteroid, brings it to a heliocentric orbit, then travels to the next asteroid. In the two-spacecraft model, the pitcher moves from asteroid to asteroid while the catcher remains in an Earth heliocentric orbit. In their analysis, each mission visits the same asteroids in the same order, but in real mission planning, that may not be the case.

The paper is full of detail that can’t all be explained here. Overall, it shows that the two-spacecraft mission has some advantages. But that’s only when asteroids are brought to Earth’s heliocentric orbit.

But as we’ve written about here at newsastronomy.com, it may not be necessary to bring asteroids close to Earth. Maybe Mars orbit is a better location.

The paper also doesn’t explore spacecraft design, although the authors acknowledge that if two spacecraft need to be developed, designed, and built, it increases mission complexity. And increased complexity means increased costs. But for the researchers, two things are clear: “The advantages of the two-spacecraft strategy are a higher quantity of retrieved mass and a shorter mission duration. Both imply a potential increase in revenue.”

Of course, any real benefits will depend on individual missions and the orbits and masses of individual asteroids. “Thus, the two-spacecraft has the potential to deliver a higher mass within a lower amount of time, but it still remains dependent on the targeted asteroids and launch date, such that a case-by-case analysis is necessary,” they write.

The authors don’t speculate much beyond their results. But they do point out that it might be possible for two or more pitcher spacecraft to service a single catcher. The two spacecraft mission is already more complicated than the single spacecraft mission because the pair of spacecraft have to be closely coordinated. Adding additional pitchers would only increase the complexity.

Asteroid mining is a ways off in the future, though, if it ever happens. For now, we’re building a more accurate and complete catalogue of asteroids, we’re bringing asteroid samples back to Earth for analysis, and we’re testing kinetic impactors to influence asteroid orbits.

The post Two Spacecraft Could Work Together to Capture an Asteroid and Bring it Close to Earth for Mining appeared first on newsastronomy.com.