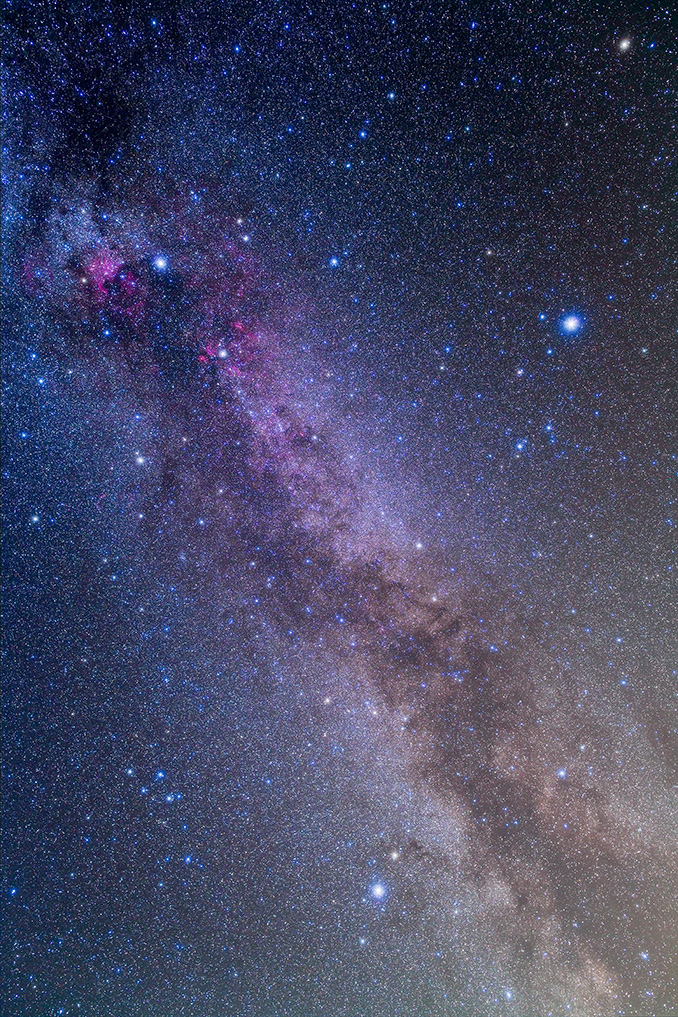 The marvellous Summer Triangle asterism has the summer Milky Way flowing through it. Vega, the asterism’s brightest star, lies top-right, while Altair can be seen at the bottom centre. Image: Alan Dyer.

The Summer Triangle is arguably the most popular multi-constellation asterism in the entire sky, a pattern formed from Vega, Altair and Deneb, three of the brightest stars (all placed in the top twenty brightest) on show in the summer sky from mid-northern latitudes.

It’s one of the best asterisms that inexperienced observers can find; once you’ve successfully located the stars, and recognised the outline of the Triangle, you’ll have identified the location of Lyra, Cygnus and Aquila, three of the major summer constellations, along with Vulpecula and Sagitta, which lie within the outline of the Triangle. The sheer brightness of each of the Triangle stars offers the distinct advantage of readily picking out the asterism from light-polluted towns and cities, even on light mid-summer nights.

At at a dark, countryside location, and you’ll be able to enjoy the marvellous sight of the summer Milky Way slicing right through the centre of the asterism. 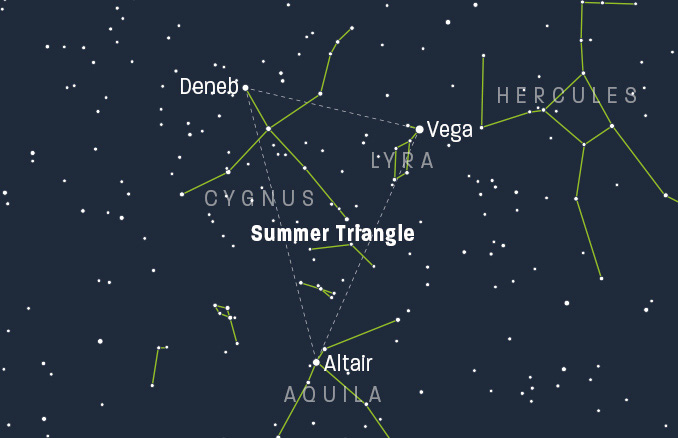 AN graphic by Greg Smye-Rumsby

At this time of the year from UK shores, nightfall still seems to take an eternity to arrive. By mid-August, the end of nautical twilight, which arrives between about 9.30pm and 9.45pm BST, signals the start of observing.

Vega (alpha [α] Lyrae), the principal star of Lyra, the Lyre, is probably the first star you’ll notice when looking high overhead towards the south. It marks the north-western corner of the Triangle. Shining brilliantly at magnitude +0.03, Vega is the fifth-brightest star in the entire sky, a class-A0 white main-sequence dwarf that lies just 25 light years away, which accounts for much of its apparent brightness. 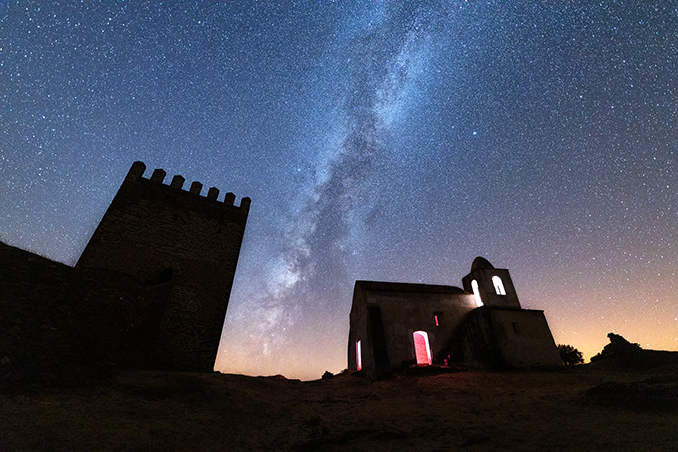 Altair (left), Vega and the Milky Way imaged over the the castle of Noudar in Barrancos, Alentejo, Portugal. Image: Sérgio Conceição.

Casual stargazers and fledgling observers can be caught out by how large certain constellations and asterisms actually are. The Summer Triangle encompasses a large swathe of celestial real estate and gauging the substantial distances on the sky between its trio of stars will be helped by knowing that your clenched fist held out at arm’s length covers around 10 degrees across your knuckles, and when holding out your arm with the back of your hand showing your fingers spread far apart, the angle between the tips of your thumb and little finger will reach around 22 degrees. 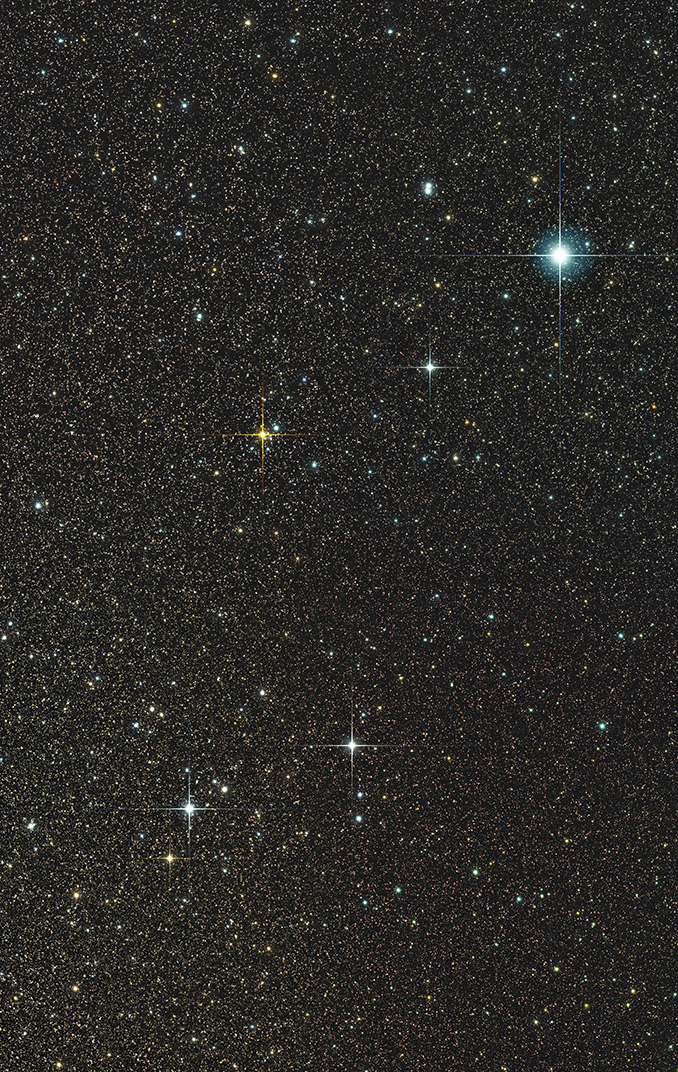 The constellation of Lyra, with brilliant Vega blazing away to the top-right. Image: Greg Parker.

Once you’ve found Vega, look eastwards by around 25 degrees and you should locate magnitude +1.25 Deneb (alpha Cygni), the primary star of Cygnus, the Swan, and the faintest star of the Triangle-trio. Despite paling against dazzling Vega, ponder when gazing upon it that Deneb is a monster star, a behemoth class-A2 supergiant that lies an incredible 1,425 light years distant, placing it not far off 60 times further away than Vega! Deneb is one of the most intrinsically bright stars in its class, which gives it an amazing absolute magnitude of –7.09.

The third and final star in the Summer Triangle is magnitude +0.77 Altair, the lead star of Aquila, the Eagle. It’s a class-A7 main-sequence dwarf lying 16.7 light years from Earth. Altair is a very rapid rotator (measured at an amazing 210 km/s at its equator [ten-hour rotation period]). Lying at the apex of an upside-down triangle, you’ll need to plunge southwards from Deneb by nearly 40 degrees, or by around 34 degrees from Vega, to locate Altair. Yet it is still well placed from UK shores on late-summer nights, culminating just short of an elevation of 50 degrees by about 11.15am BST. 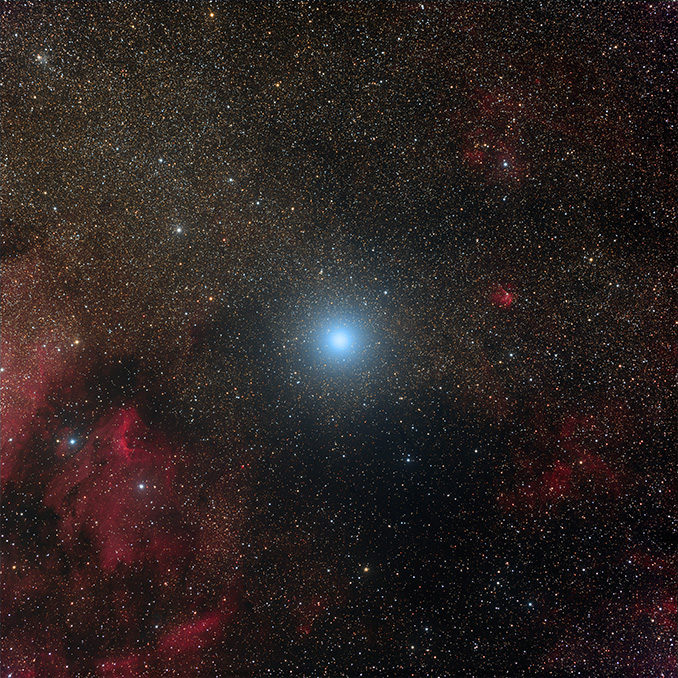 Mighty Deneb, leader of the constellation of Cygnus, the Swan, pictured with the Pelican Nebula (IC 5070) and part of the ‘Eastern Seaboard’ region of the North American Nebula (NGC 7000). Image: Dan Crowson.