News Astronomy > News > To get Artificial Gravity on the Moon, you’d Need a Giant Rotating Lunar Base

Living and working in space for extended periods of time presents a number of challenges. These include radiation, as locations beyond Earth’s protective magnetosphere are exposed to greater levels of solar and cosmic rays. There’s also the need for self-sufficiency since Lunar or Martian bases are too far to rely on regular resupply missions like the International Space Station (ISS). Last, there’s the issue of low gravity, which is especially pressing for long-term missions and habitats beyond Earth. If humanity’s future truly lies in space, we must devise solutions to this issue in advance.

A popular idea is to create rotating habitats in space that simulate artificial gravity, like the Pinwheel Station or the O’Neill Cylinder. Another proposal by a team of Japanese researchers calls for something bolder: a rotating habitat on the Moon! On July 5th, representatives from Kyoto University and the Kajima Corporation (one of the oldest and largest construction companies in Japan) announced that they would be partnering to conduct a study on this concept and how it could make humanity’s plans for living on the Moon and Mars a reality!

The study is a collaborative effort between Kyoto University and the Kajima Corporation (one of Japan’s oldest and largest construction companies). The announcement was made during a press conference covered by Kansai TV NEWS and shared via their Youtube channel. Here, Professor Yosuke Yamashiki of Kyoto University and Takuya Ohno – the head of the Architectural Design Department at Kajima Construction’s Kansai Branch – shared a video of their proposed “artificial gravity ” facility” for living on the Moon and Mars.

The effects of microgravity on human physiology are well-document. Thanks to many experiments involving long-term stays aboard the ISS, which includes NASA’s famous Twin Study, it is established that astronauts will experience a loss in muscle mass and bone density. Recent research has also shown that the loss of bone strength is something astronauts never fully recover from. Other noted effects include changes in cardiovascular health, organ function, eyesight, psychological effects, and gene expression.

Unfortunately, there is currently no research into the effects of microgravity (or low-gravity) on reproduction and early child development. This must be addressed if astronauts and regular folk hope to live on the Moon, where the surface gravity is 16.5% (0.165 g) that of Earth. On Mars, where the surface gravity is roughly 38% (0.385 g) that of Earth, the situation is slightly better – but by no means ideal. A common suggestion is that structures that rotate to create centripetal force would simulate Earth-gravity – 9.8 m/s2, or 1 g.

This is the idea behind the facility known as “Lunagrass,” which would allow astronaut crews to live and work in simulated Earth gravity. As Professor Yamashiki explained:

“Mars and the Moon are much smaller (surface gravity) than Earth. I wonder if humans will eventually live in these places… It is not known if mammals can breed and grow normally in a space with low gravity such as the moon. However, the gravity inside ‘Lunagrass’ is the same as that of the earth, and it is possible to give birth, and if you live here, you can maintain a body that can return to the Earth at any time.” 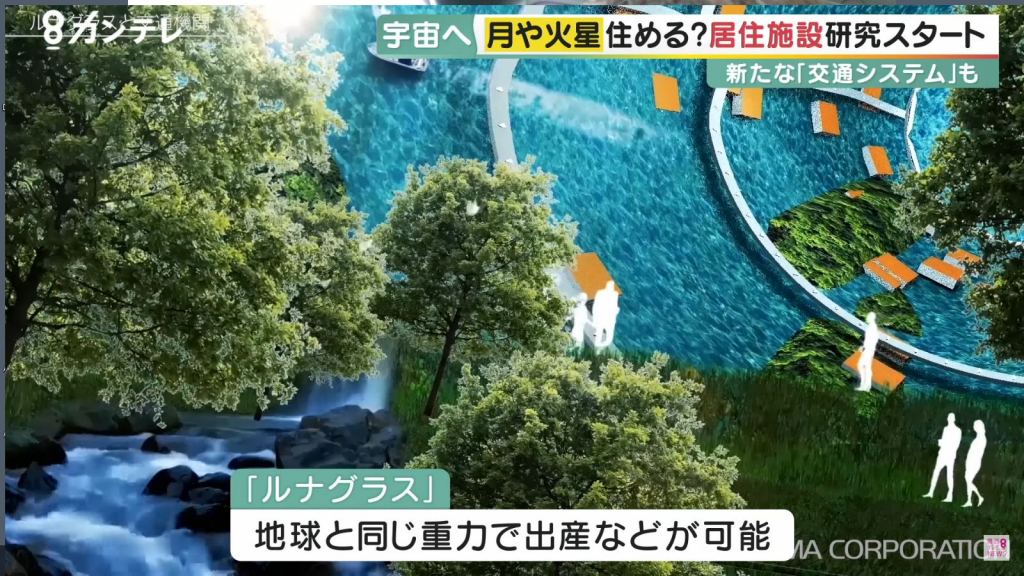 Interior view of the rotating Lunagrass base. Credit: Kajima Construction

As the video shows, the concept is similar to an O’Neill Cylinder, except that it stands and rotates on its side and is tapered towards the bottom (creating a funnel shape). The “funnel” is supported by a large lattice structure that spreads out at the base to distribute the facility’s weight over a larger surface area. Winding around the base structure is a track showing a high-speed train responsible for transportation from the funnel to the lunar surface or between points inside.

Inside the funnel, we see bodies of water, landmasses with greenery and trees, what appear to be floating structures (the brown squares), and a transportation network that allows people to travel throughout. The simulated people in the video are shown walking along the “walls” as if it were no different than walking on the Earth’s surface (there are even motorboats driving on the water!) At the base of the funnel, which is less subject to centripetal force, there is a standing body of water with more boats cruising around.

Other ideas addressed in the presentation include an Earth-Moon transport (and even an interstellar one) that would rely on the same principles to simulate artificial gravity while in space. These are known as the “Luna Beagle” and “Space Express,” respectively. The animation shows what the former would look like, a hexagonal-shaped vessel with modules extending from a central spoke that rotates to provide artificial gravity for all those inside. Said Professor Yamashiki:

“Also, research on transportation methods using “artificial gravity” has started. The idea is to create a ‘Luna Beagle’ that runs on the Moon and a ‘Space Express’ that moves between stars… I’m trying to guarantee the same gravity (1G) environment as the Earth while moving. [Space Express] needs a lot of acceleration, and I think it’s better to tow it with a rocket.” 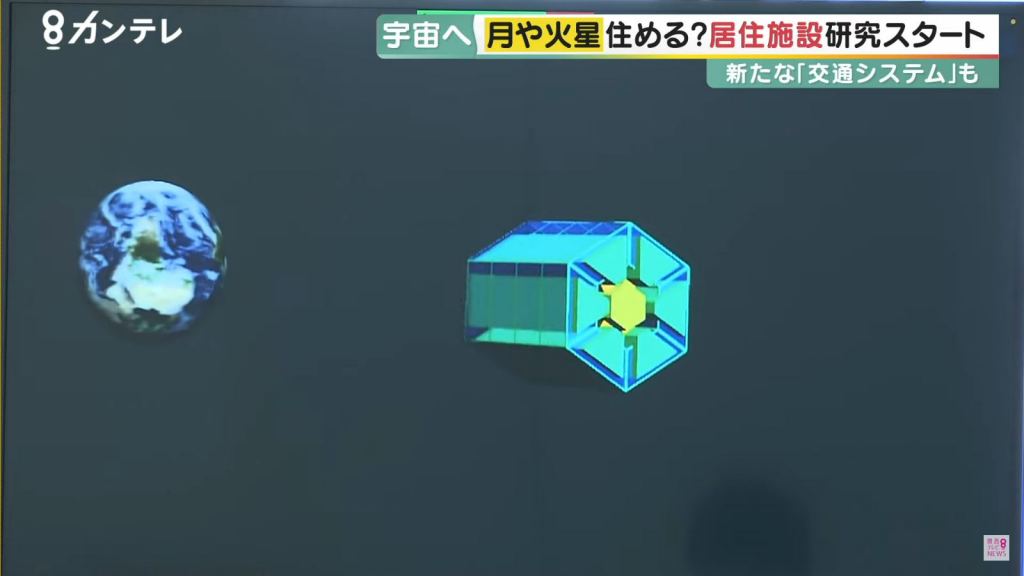 Animation of the “Luna Beagle” transiting between Earth and the Moon. Credit: Kajima Construction

Alas, one can’t help but raise the obvious issue of costs and the inevitable engineering challenges of building this type of structure on the Moon. For instance, during the presentation, the subject of in-situ resource utilization (ISRU) and how this structure would be built did not come up. Would it be assembled on Earth or in space, then sent to the Moon, or assembled on-site using regolith and other lunar resources? Would the job be handled by autonomous robots, human crews remotely-operating machinery on the surface, or a combination thereof?

As Ohno admitted, the Lunagrass concept is “a dream story” at this point and not an actual mission architecture. But, he added, it is a serious idea and one that could very well be feasible in the near future. As humanity embarks on a renewed era of space exploration that includes plans for permanent habitats on the Moon and Mars, “dream story” ideas like this play an important role.

“Of course, it’s not technical at all, but it’s very important to come up with ideas at this stage,” he said. “If possible, I want to go to the Moon. More specifically, I want to go to Mars. I want to realize the concept on the Moon in some way in 2050.”

The post To get Artificial Gravity on the Moon, you'd Need a Giant Rotating Lunar Base appeared first on newsastronomy.com.