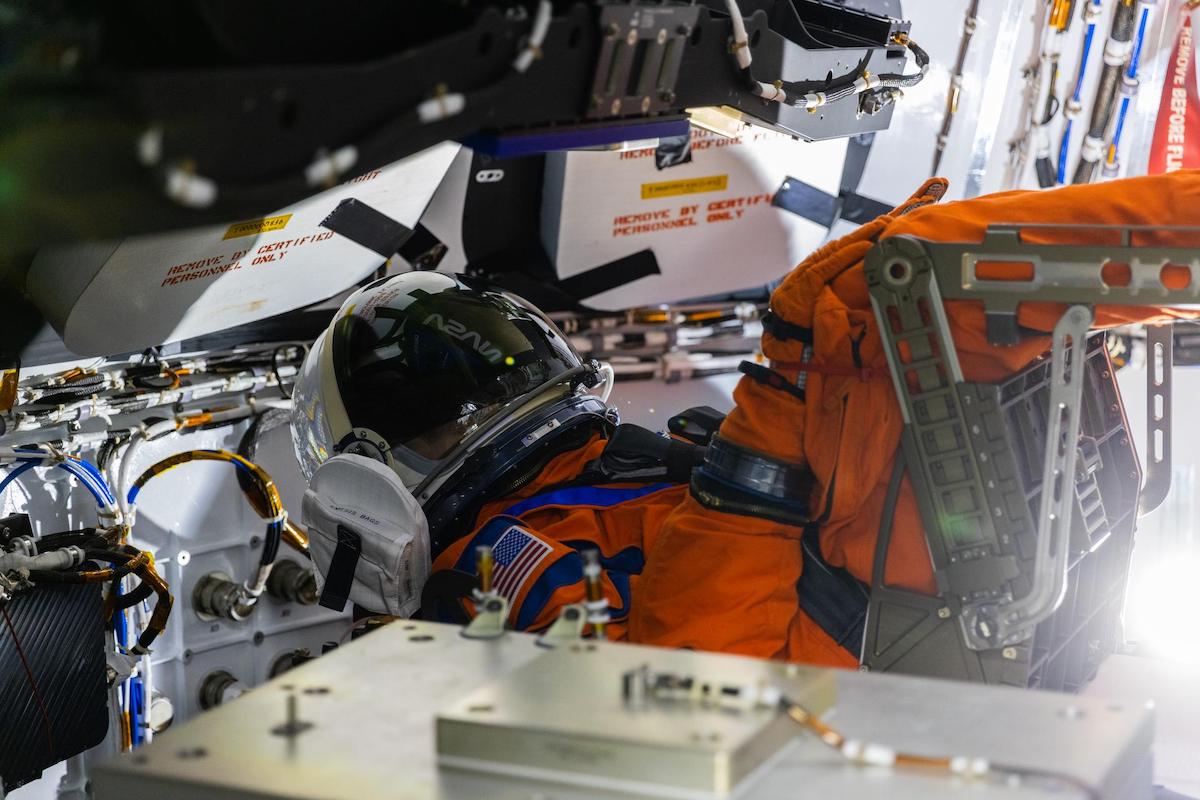 One of the three mannequins on the Artemis 1 mission, dubbed “Commander Moonikin Campos,” is shown inside he Orion crew module in this Aug. 3 photo. Credit: NASA/Frank Michaux

The three mannequins — one wearing an Orion astronaut spacesuit and two others in recumbent passenger seats — were recently installed inside the pressurized cabin of the Orion spacecraft inside the Vehicle Assembly Building at the Kennedy Space Center in Florida.

They were aboard the Orion capsule on top of the SLS moon rocket when it rolled to the launch pad early Aug. 17 for final countdown preparations. The mannequins are fitted with thousands of sensors to measure acceleration, vibration, and radiation levels throughout the Orion spacecraft’s trip from Earth to the moon and back.

The SLS moon rocket and Orion spacecraft are scheduled for liftoff no earlier than Aug. 29 to begin NASA’s Artemis 1 mission, an unpiloted shakedown cruise before follow-on SLS/Orion launches carry astronaut crews toward the moon. NASA’s Artemis program is intended to return astronauts to the moon’s surface, establish a long-term presence there, and test technologies for future human expeditions to Mars.

“Artemis 1’s primary mission is to validate the envelope of performance for the crew transportation system that will serve as our workhorse for the crew lunar and Mars missions,” said Pat Troutman, a designer and architect in NASA’s Moon to Mars architecture development office.

The Orion spacecraft will travel past the moon and swing into a distant retrograde orbit with an average distance of more than 43,000 miles (70,000 kilometers) from the lunar surface. At that distance from Earth, the spacecraft will be flying outside the magnetic field that shields the planet from solar and cosmic radiation.

Artemis 1 also carries a range of secondary payloads, including deployable subsatellites, or CubeSats, to pursue scientific and technology demonstration missions. There are experiments and payloads inside the Orion spacecraft, too.

“The science and technology payloads on this mission, they’re going to tell us about the environment that humans will travel through, and they’re going to push the envelope with respect to what advanced technology can do for us on these future missions,” Troutman said. “So these payloads will inform us how to better protect the crew from the space radiation, and demonstrate advanced propulsion capabilities, enabling us to more efficiently send probes and humans to deep space.

“They’ll demonstrate autonomy and special technologies that will help future Mars crews inspect their spaceships without having to leave the safety of their pressurized cabins,” Troutman said. 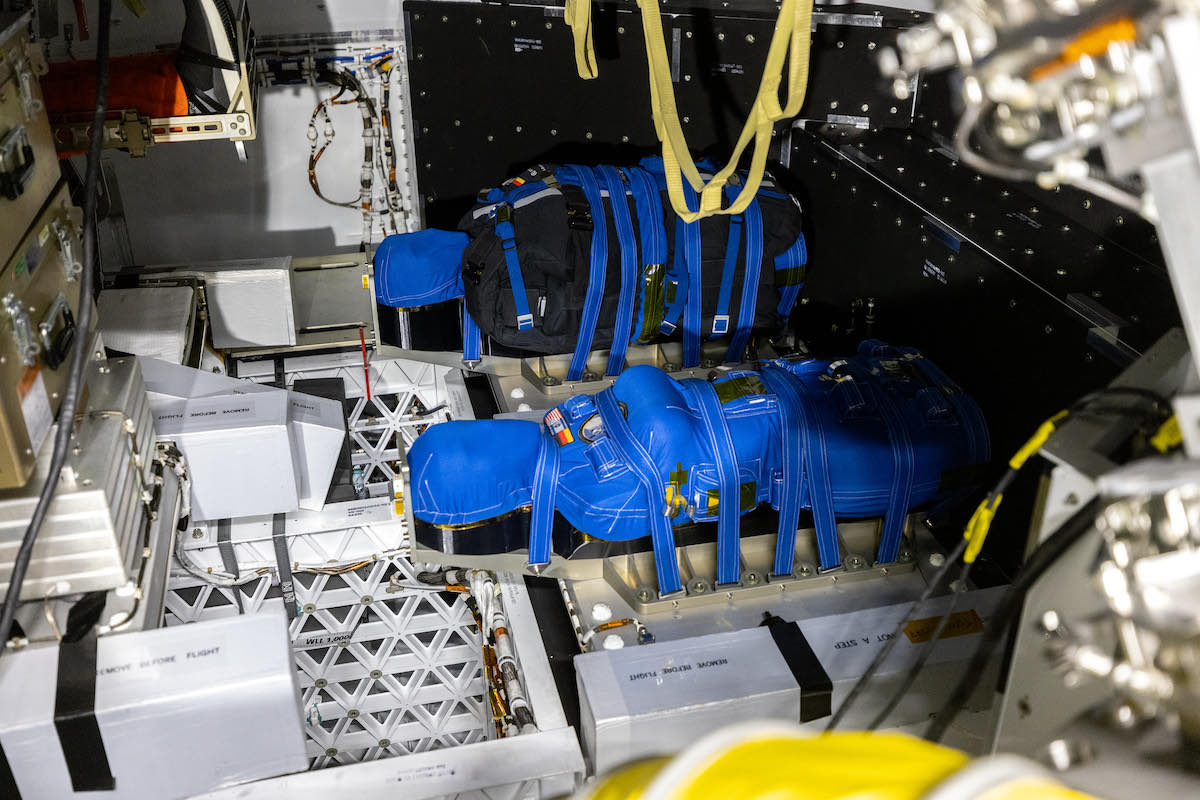 Part of the German-led Matroshka AstroRad Radiation Experiment (MARE) investigation, two female mannequins – Helga and Zohar – are equipped with radiation detectors, while Zohar also wears a radiation protection vest, to determine the radiation risk on its way to the moon. This Aug. 8 photo shows the two mannequins in passengers seats inside the Orion crew module. Credit: NASA/Frank Michaux

One of the mannequins flying on the Artemis 1 mission wears an orange spacesuit similar to the one that astronauts will put on for launch and re-entry on future Artemis flights.

“The goal is to simulate, test, evaluate the human experience of launch and landing,” said Dustin Gohmert, Orion crew survival systems project manager at NASA’s Johnson Space Center in Houston. “Artemis 1 is uncrewed. But with the mannequin, we’ll be able to evaluate how that human behaves on the vehicle.

“This spacesuit that we have — the Orion Crew Survival Suit, or OCSS — will be worn by all future astronauts from Artemis 2 and beyond on all the subsequent missions,” Gohmert said.

The suit is designed to sustain an astronaut for up to six days, providing the crew member with oxygen, cooling and other life-sustaining functions if the Orion spacecraft loses cabin pressure in flight. That could give the Orion spacecraft time to make an emergency return to Earth from the vicinity of the moon.

“That’s a feat we’ve never before attempted in the history of spacesuits,” Gohmert said.

“By and large, the suit is functionally identical to what we will be flying for Artemis 2 and beyond,” he said.

The mannequin wearing the Orion spacesuit is named “Commander Moonikin Campos” in honor of Arturo Campos, an engineer responsible for the electrical systems on the Apollo lunar module. His expertise was instrumental in allowing the Apollo 13 astronauts to use the lunar module as a lifeboat for their return to Earth.

Gohmert said “Campos” will will be riding on the Orion spacecraft in a “fully flight-like seat.”

“It’s designed with advanced occupant safety features that we’ve incorporated through the last decade of study, and we’ve done that to maximize human safety,” Gohmert said. “The NASA crew survival engineering team … we’ve spent this last decade working to create a fully integrated crew safety system. And to do that, we had to combine the vehicle, the suit, the seat, and the human all into one protective package. With this mission, we’re going to measure some of the important aspects of those launch safety features.

“With the mannequin, we’ll be able to look at the dynamic responses of that system,” Gohmert said. “This is important because it allows us to take what we’ve learned from testing and from modeling and validate that against the real world performance, so that we can ensure the safety of all the future astronauts.” 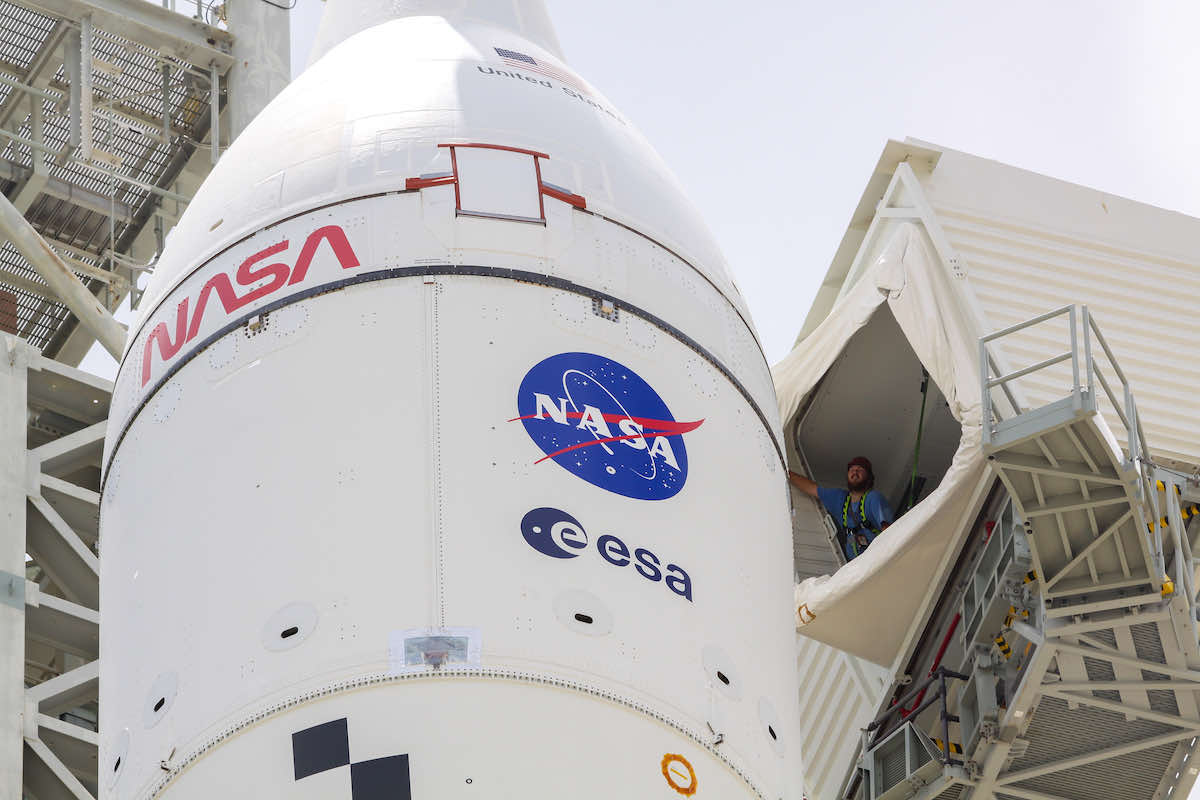 A member of NASA’s Artemis ground team is seen inside the white room near the Orion spacecraft’s hatch during rollback of the Space Launch System moon rocket to the Vehicle Assembly Building on July 2. Credit: Stephen Clark / Spaceflight Now

Commander Moonikin Campos is equipped with two radiation sensors, and its seat has sensors under the headrest and behind the seat to capture acceleration and vibration measurements throughout the mission, including liftoff, re-entry, and splashdown in the Pacific Ocean.

The Orion spacecraft has additional accelerometers to compare the forces that affect the upper and lower level seats inside the capsule. Future Orion missions will carry crews of four astronauts.

Two “co-passengers” are also aboard the Orion spacecraft for the Artemis 1 mission. Two “phantom torsos” are strapped into passenger seats inside the capsule to gather data about the radiation exposure astronauts will encounter on lunar expeditions.

The two female-bodied phantoms, named Helga and Zohar, are made out of epoxy resin. Radiation interact with the resin material in a similar way to how it impacts human bones, tissue and organs, according to Thomas Berger, principal investigator for the phantom torsos at DLR, the German Aerospace Center.

There are more than 10,000 sensors embedded in the phantoms to collect radiation measurements at different parts of the body.

“Besides the difference between a man and a woman when it comes to biological effects, we will differentiate between different body organs, between the brain and the uterus, for example,” said Ramona Gaza, science team lead for the Matroshka AstroRad Radiation Experiment, or MARE, investigation. 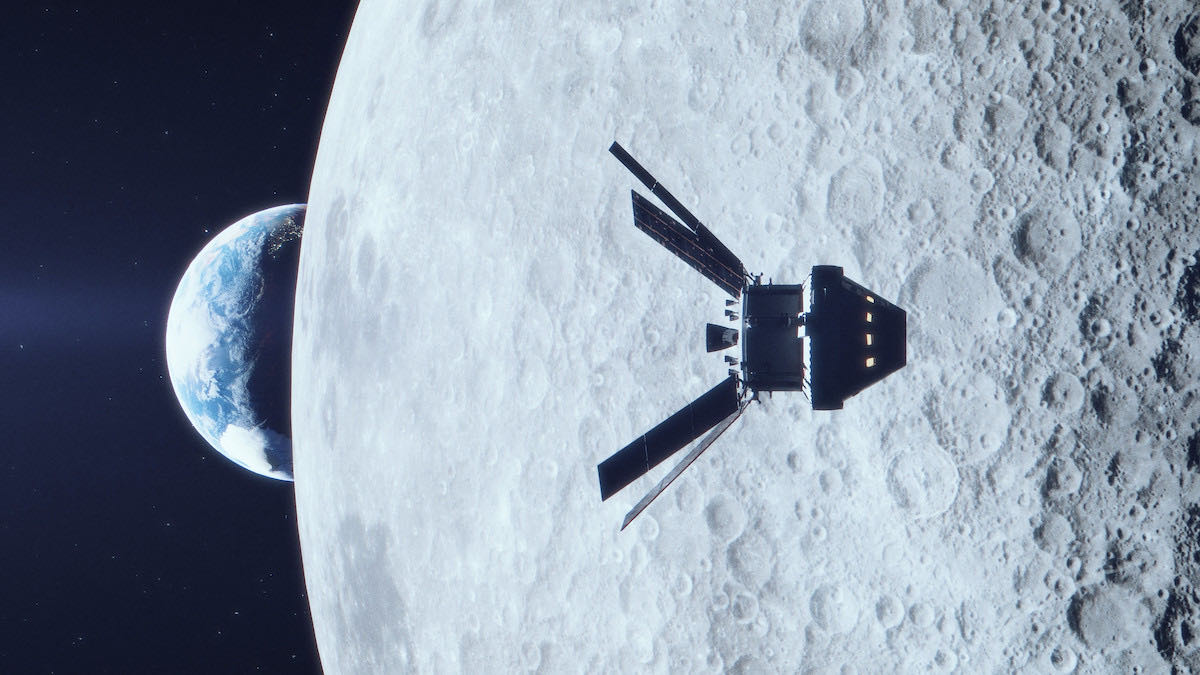 Artist’s concept of an Orion spacecraft at the moon. Credit: NASA

One of the two German-provided phantoms will wear a radiation vest developed by the Israeli company StemRad and supported by the Israel Space Agency. The vest will allow scientists to test mitigation measures for astronauts to protect themselves during a solar storm that could shower the Orion spacecraft with radiation.

“Each of these four experiments will help us understand a unique aspect of how biological systems can adapt and thrive in deep space,” said Sharmila Bhattacharya, NASA program scientist for space biology. “Gathering information like this and analyzing it after flight will eventually help us paint the full picture of how we can help humans thrive in deep space.”

Assuming the Artemis 1 mission takes off Aug. 29, the Orion spacecraft will spend 42 days in space before returning home for a parachute-assisted splashdown Oct. 10 in the Pacific Ocean west of San Diego.