News Astronomy > News > This Tiny Dot is one of the Biggest, Most Active Galaxy Superclusters Ever Seen. It Was Already a Monster Shortly After the Big Bang

A newly discovered supercluster of galaxies is so distant that astronomers say its light has been traveling for over twelve billion years to reach telescopes on Earth. But this cluster, named SPT2349 ?56 is gigantic, and so old that it is actually classified as a proto-cluster of galaxies, meaning it might be one of the earliest large clusters of galaxies in our Universe. It is also one of the most actively star-forming proto-clusters known.

Supercluster SPT2349 ?56 was discovered in the submillimeter band by the South Pole Telescope. Astronomer Matthew Ashby from the Harvard Smithsonian Center for Astrophysics (CfA) was one of the team members who conducted follow-up observations with the Gemini Observatory, the Hubble Space telescope and the Spitzer Space Telescope in order to conduct deep observations at optical and infrared wavelengths. 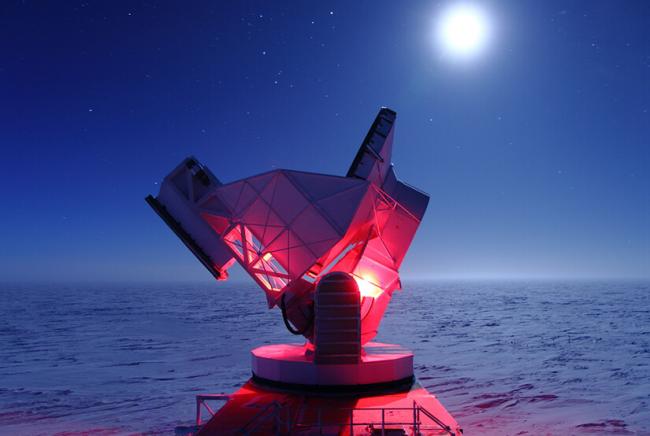 The South Pole Telescope (SPT) is a 10-meter-diameter telescope located at the Amundsen-Scott South Pole Station, Antarctica. In addition to its primary mission of measuring the cosmic microwave background, the SPT is part of the Event Horizon Telescope project. Credit: Daniel Luong-Van

SPT2349 ?56 hosts hundreds of galaxies, including over thirty submillimeter-bright galaxies and dozens of other luminous and/or spectroscopically confirmed star-forming galaxies. Even though this is a cluster of galaxies from the early Universe, galaxy mergers and active star formation is taking place at an incredible rate, producing over ten thousand stars per year. The astronomers said one of its brightest sources appears to be the merger of over twenty galaxies.

A typical supercluster contains all the galaxy groups and galaxy clusters that seem to be associated with one another through mutual gravitational attraction, and contains about a quadrillion solar masses. Astronomers have estimated that there are 130 superclusters located within 1.3 billion light-years of the Milky Way. Another supercluster from the early Universe that was detected by the South Pole Telescope in 2010, weighs in at around 800 trillion Suns, and holds hundreds of galaxies.

The astronomers said they predict that the core galaxies of this supercluster will quickly merge into one of the brightest galaxy clusters, and that their observations provide a direct view of the early formation mechanisms of this class of object. 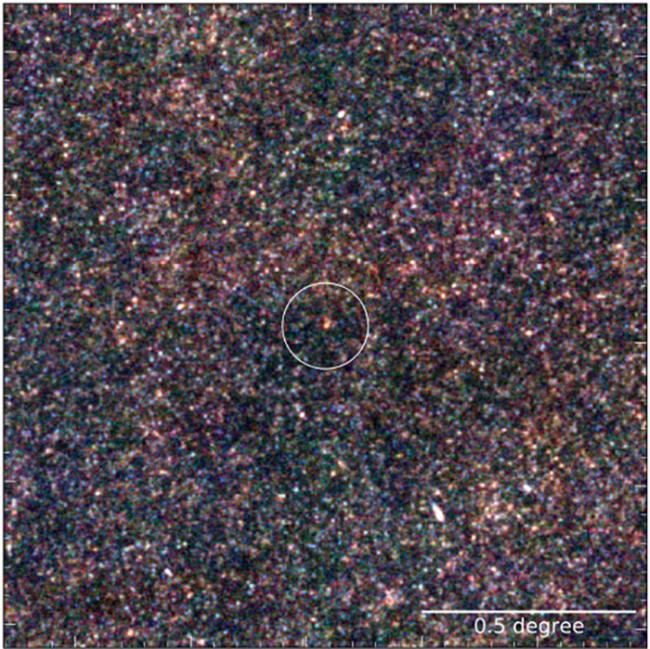 A false-color image of the far-infrared emission from a massive protocluster of galaxies (in the circle) dating from the epoch about 1.4 billion years after the big bang. Astronomers have completed deep optical and infrared observations of the complex and concluded that the star formation processes at work, although exceptionally active, generally seem to follow the same processes seen in our galaxy. Credit: NASA/ESA/Herschel; Miller et al.

The post This Tiny Dot is one of the Biggest, Most Active Galaxy Superclusters Ever Seen. It Was Already a Monster Shortly After the Big Bang appeared first on newsastronomy.com.