News Astronomy > News > This is How You Get Multiple Star Systems

The problem is that it only explains how single stars form. But about half of the Milky Way’s stars are binary pairs or multiple stars. The Nebular Hypothesis doesn’t clearly explain how those stars form.

First of all, after a molecular cloud collapses into a star, it forms a rotating disk of gas and dust around the young protostar, called a circumstellar disk. One theory explaining how multiple stars form says that a pair or more of young protostars are fragments of a parent disk that was once much larger. Another theory says that the young protostars form independently, then one captures the other in an orbital arrangement. T Tauri stars are less than 10 million years old and represent the type of young stars found in stellar nurseries like the Orion Cloud Complex. It shows the disc surrounding the young star, out of which planets will eventually form. The researchers behind this new study examined the dense cores that form young stars like this to find differences between cores that formed multiple stars and those that formed single stars like our Sun. Image Credit: ALMA (ESO/NAOJ/NRAO)

But when stars form inside a molecular cloud, it begins with a dense core inside the cloud. That core initiates the gravitational collapse that gathers enough gas in one place to form a star. The question is, what’s different about some of those cores that cause multiple stars to form versus single stars?

The JCMT is a 15-meter radio telescope at Mauna Kea Observatory in Hawaii. The telescope’s submillimeter observations allow it to observe the molecular clouds where stars are born. The researchers used it to observe the Orion Molecular Cloud Complex (OMCC), the closest active stellar nursery to Earth, which is still about 1500 light-years away. The OMCC contains two giant molecular clouds (GMCs), Orion A and Orion B. They also used observations from ALMA and Japan’s Nobeyama Telescope.

The team watched multiple star systems forming in the Orion Complex and made important discoveries about the process. They presented their findings in a paper published in The Astrophysical Journal. The paper is “ALMA Survey of Orion Planck Galactic Cold Clumps (ALMASOP): How Do Dense Core Properties Affect the Multiplicity of Protostars?” The first author is Qiuyi Luo, a Ph.D. student at Shanghai Astronomical Observatory.

“During the transition phase from a prestellar to a protostellar cloud core, one or several protostars can form within a single gas core,” the paper stars. “The detailed physical processes of this transition, however, remain unclear.”

For this study, the team of researchers collected observations of 43 protostellar cores in the Orion molecular cloud complex with the JCMT. Then they used the powerful ALMA telescope to examine the interior structure of the cores. 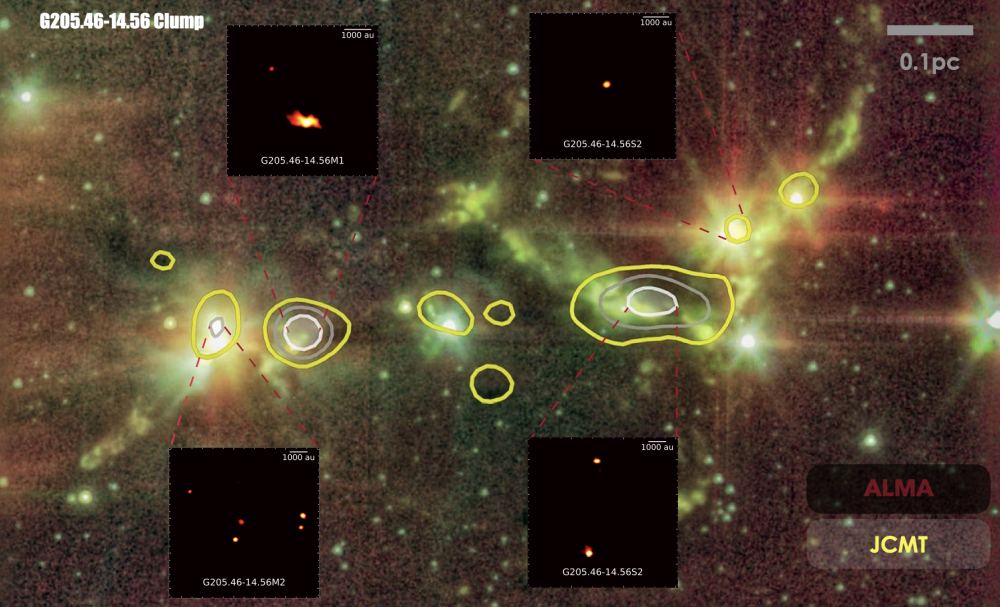 This image shows the G205.46-14.56 clump located in the Orion Molecular Cloud Complex. The yellow contours show the dense cores discovered by JCMT, and the zoomed-in pictures show the 1.3mm continuum emission of ALMA observation. These observations give insight into the formation of various stellar systems in dense cores. Image Credit: Qiuyi Luo et al. 2022.

The research shows that about 30% of the 43 dense cores form binary or multiple stars, and the remainder forms only single stars. The astronomers measured and estimated the sizes and masses of the cores. They found that binary/multiple cores have higher densities and masses, although the sizes of all the cores aren’t much different.

This figure from the study shows the exemplar core G196.92-10.37. (a) is a JCMT image with a Spitzer image superimposed on it. The yellow circle is the zoomed-in region in (b.) (b) shows continuum contour levels. (c) shows ALMA data and also indicates that the core is forming three stars: A, B, and C. Image Credit: Qiuyi Luo et al. 2022.

“This is understandable,” said first author Qiuyi Luo. “Denser cores are much easier to fragment due to the perturbations caused by self-gravity inside molecular cores.”

From there, the team turned to Japan’s 45-meter Nobayama radio telescope. They observed what’s known as the N2H+ J=1-0 molecular line in all 43 dense cores. N2H+ is diazenylium, one of the first ions ever found in interstellar clouds. This molecular line is easily observed through Earth’s atmosphere with fine precision. Astronomers use it to map the density and velocity of the gas in molecular clouds. 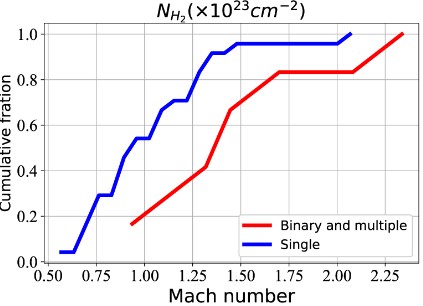 This figure from the study shows the Mach number for gas in the dense cores as measured with the N2H+ line. Higher Mach numbers mean more turbulence, and this figure shows that binary and multiple star cores are more turbulent than cores forming single stars. Image Credit: Qiuyi Luo et al. 2022.

Lead author Qiuyi Luo summarized the study’s findings in a press release. “In a word, we found that binary/multiple stars tend to form in denser and more turbulent molecular cores in this study.” 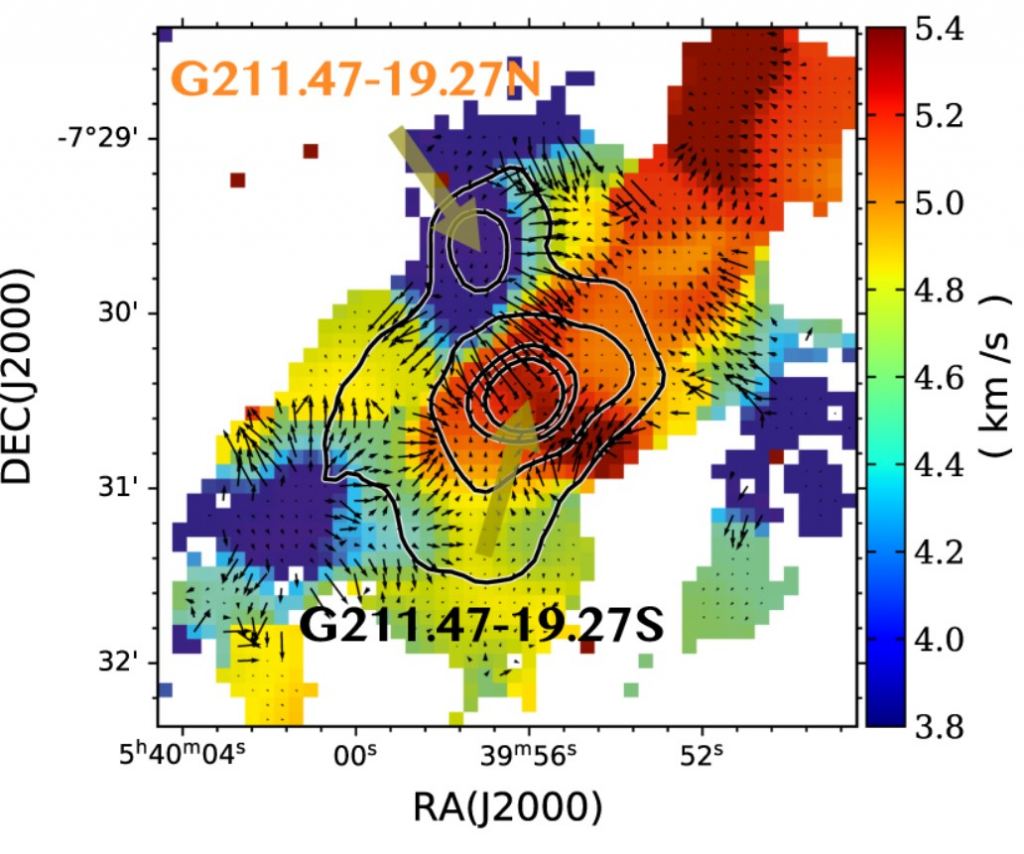 This figure from the study shows the gas velocity in two of the dense cores. Blue indicates lower velocity, and red indicates higher velocity. The arrows show the directions of the local increasing velocity gradients, with the lengths indicating their magnitudes. The top core, labelled in orange, is a binary core, and the bottom core, labelled in black, is a single core. Image Credit: Qiuyi Luo et al. 2022.

Co-author Sheng-Yuan Liu added, “The JCMT has proven to be a great tool for uncovering these stellar nurseries for ALMA follow-ups. With ALMA providing unprecedented sensitivity and resolution so that we can do similar studies toward a much sample of larger dense cores for a more thorough understanding of star formation.”

The researchers also found that the stars in each binary or multiple arrangement are usually at very different evolutionary stages. The more evolved protostars are generally further from the center of the dense cores than their younger counterparts. This indicates that as stars evolve, they migrate out of their natal cores.

This study shows some differences between cores that form single stars versus cores that form binary and multiple stars. But it’s only the beginning: there’s much more to learn and many more questions.

“We have yet to look at the effect of magnetic fields in our analysis,” said corresponding author Tie Liu, who was also the lead for the ALMA observations. “Magnetic field may suppress the fragmentation in dense cores, so we are excited to focus the next stage of our research on this area using the JCMT.”

The authors point out that the low sample size hampers their results. Forty-three dense cores may not be enough data to draw conclusions from, especially because they’re all from the same molecular cloud. The study was also limited by the resolution of the various observatories and telescopes used in the study.

“Our results could be further tested using future higher spatial and spectral resolution observations toward a more complete dense core sample in various molecular clouds that are in widely different environments,” they conclude.

The post This is How You Get Multiple Star Systems appeared first on newsastronomy.com.