From orbit, this landscape on Mars looks like a lacy honeycomb or a spider web. But the unusual polygon-shaped features aren’t created by Martian bees or spiders; they are actually formed from a ongoing process of seasonal change from created from water ice and carbon dioxide. 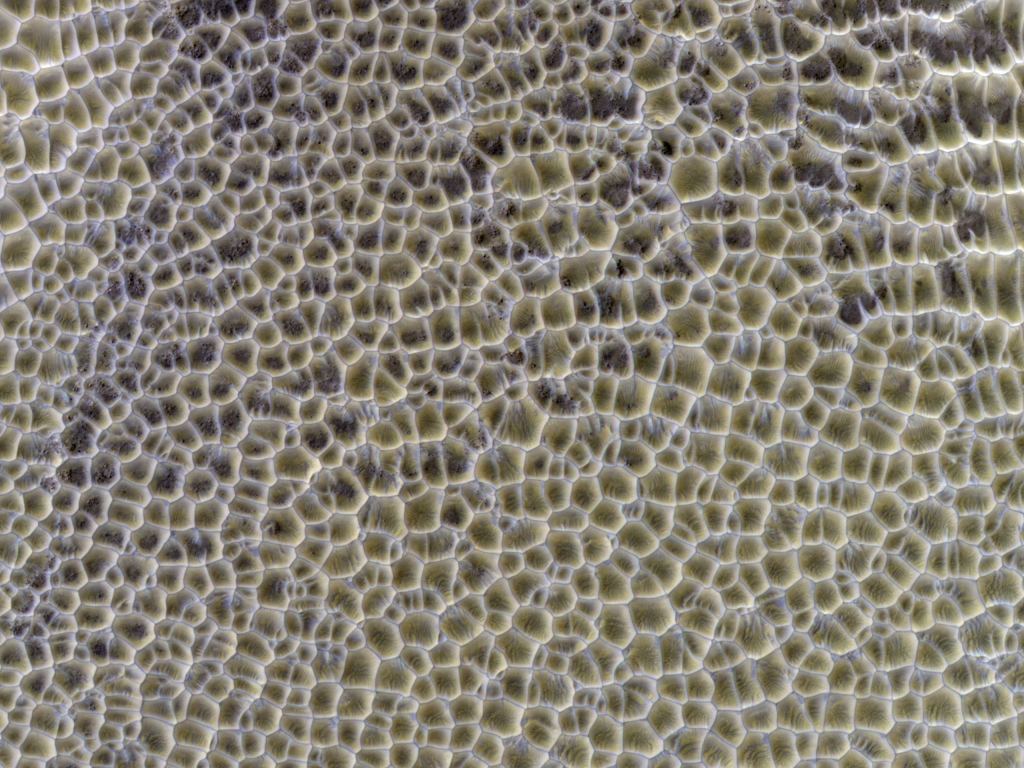 Polygonal dunes on Mars, as seen by the HiRISE camera on the Mars Reconnaissance Orbiter. Credit: NASA/JPL/UArizona

The HiRISE camera (High Resolution Imaging Science Experiment) on the Mars Reconnaissance Orbiter has seen a lot of polygon shapes in the years since 2006 when it went into orbit of Mars. The science team from HiRISE say that both water and carbon dioxide in the solid form of dry ice play a major role in sculpting Mars’ surface at high latitudes. Water ice frozen in the soil splits the ground into the polygon shapes. Then, dry ice sublimating from just under the surface when the ground warms in the spring creates even more erosion, creating channels around the boundaries of the polygons.

The polygons form over many years as the near-surface ice contracts and expands seasonally. 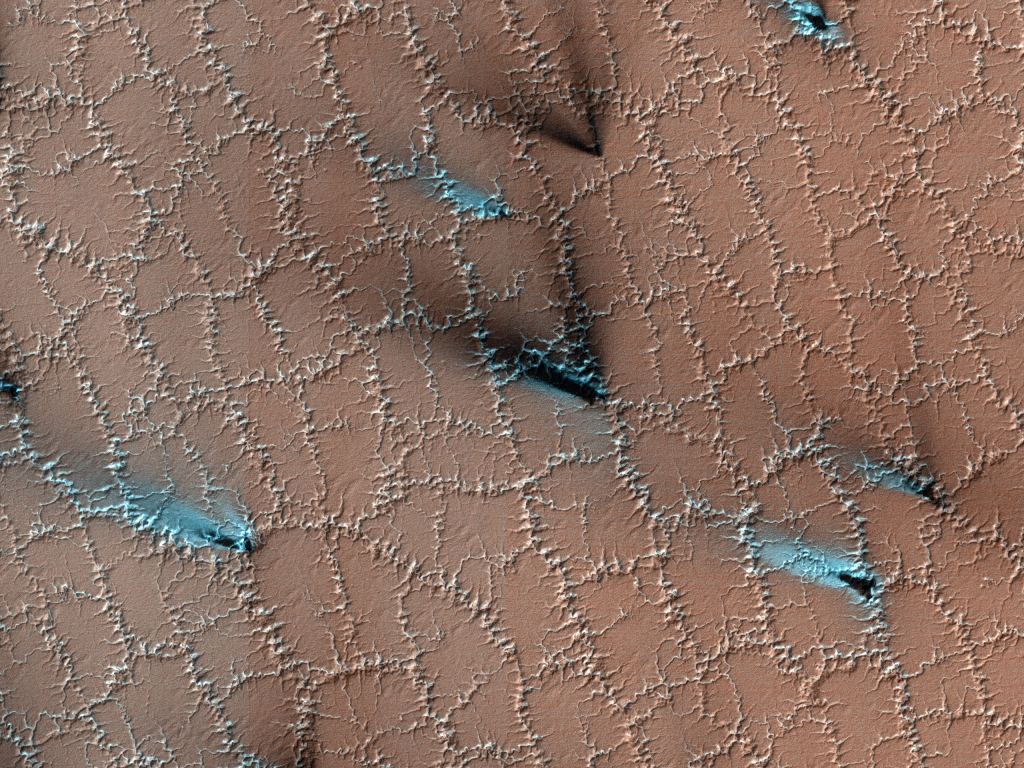 Spring fans and polygons on Mars, as seen by the HiRISE camera on the Mars Reconnaissance Orbiter. Credit: NASA/JPL-Caltech/UArizona.

But this polygon-covered region shows even more springtime activity, evidenced by the blue fan-shaped features. Scientists say the layer of translucent dry ice coating the surface develops vents that allow gas to escape.

“The gas carries along fine particles of material from the surface further eroding the channels,” the team wrote on the HiRISE website. “The particles drop to the surface in dark fan-shaped deposits. Sometimes the dark particles sink into the dry ice, leaving bright marks where the fans were originally deposited. Often the vent closes, then opens again, so we see two or more fans originating from the same spot but oriented in different directions as the wind changes.” 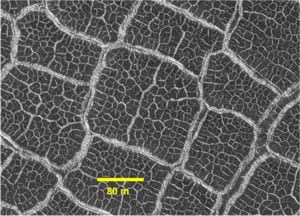 Detailed image of large-scale crater floor polygons, caused by desiccation process, with smaller polygons caused by thermal contraction inside. The central polygon is 160 metres in diameter, smaller ones range 10 to 15 metres in width and the cracks are 5-10 metres across. Credit: NASA/JPL

Scientists study polygonally-patterned ground on Mars because these features help them understand the recent and past distribution of ices in the shallow subsurface, as well as provide clues about climate conditions.

And Mars isn’t the only place with polygons. Polygons can be found in Earth’s arctic and Antarctic regions, and the 2015 flyby by the New Horizons spacecraft revealed polygons on Pluto as well. 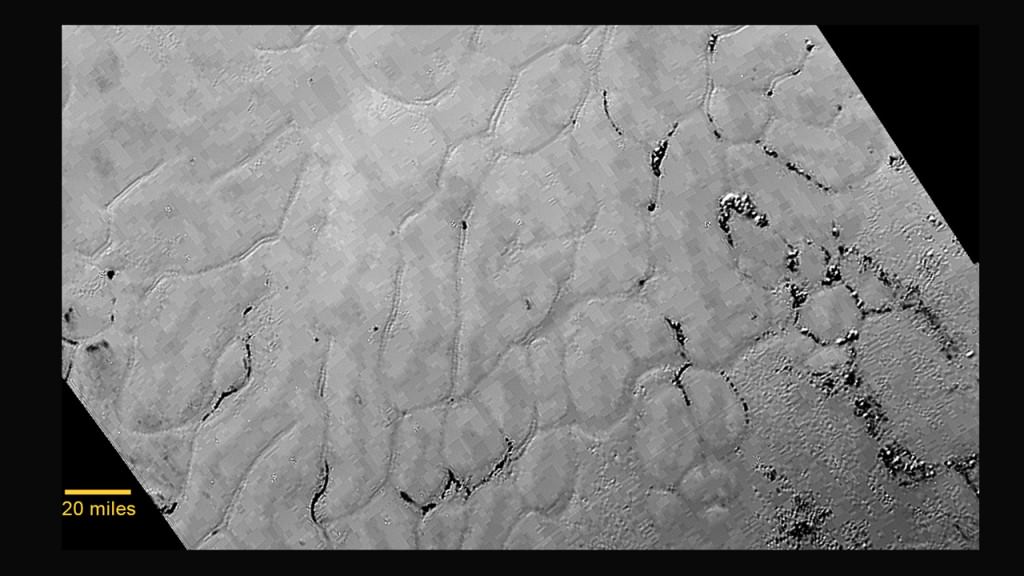 In the center left of Pluto’s vast heart-shaped feature – informally named “Tombaugh Regio” – lies a vast, craterless plain that appears to be no more than 100 million years old, and is possibly still being shaped by geologic processes. This frozen region is north of Pluto’s icy mountains and has been informally named Sputnik Planum (Sputnik Plain), after Earth’s first artificial satellite. The surface appears to be divided into polygon-shaped segments that are ringed by narrow troughs. Features that appear to be groups of mounds and fields of small pits are also visible. This image was acquired by the Long Range Reconnaissance Imager (LORRI) on July 14 from a distance of 48,000 miles (77,000 kilometers). Features as small as one-half mile (1 kilometer) across are visible. The blocky appearance of some features is due to compression of the image. Credits: NASA/JHUAPL/SWRI

The post This Bizarre Terrain on Mars is Caused by Water Ice and Carbon Dioxide appeared first on newsastronomy.com.