This is it! Today, people worldwide were treated to the first images acquired by James Webb! After years of delays, we are finally seeing the sharpest images of the Universe taken by the most powerful telescope ever deployed. The world was given a sneak peek yesterday when President Biden, VP Kamala Harris, NASA Administrator Bill Nelson, and other NASA officials released the deepest and sharpest infrared image of the Universe to date. But at 10:30 Eastern (07:30 Pacific), all the remaining first images were released!

The event was live-streamed by NASA TV, took place at NASA Goddard Spaceflight Center, and featured live streams from partner institutes in Canada, Europe, and across the U.S. This allowed the science teams that were responsible for the images to present them and explain how they illustrate the different science operations the JWST will perform throughout its mission.

The first image, Deep Field SMACS 0723, was presented by Jane Rigby, the Operations Project Scientist for the JWST mission. This image, which was revealed yesterday, showed a massive galaxy cluster and the gravitational lenses they produced (which magnified fainter galaxies in the distance). As Rigby explained, the images show galaxies as they appeared 13 billion years ago and spectra obtained by Webb‘s Near-Infrared Spectrograph (NIRSpec). 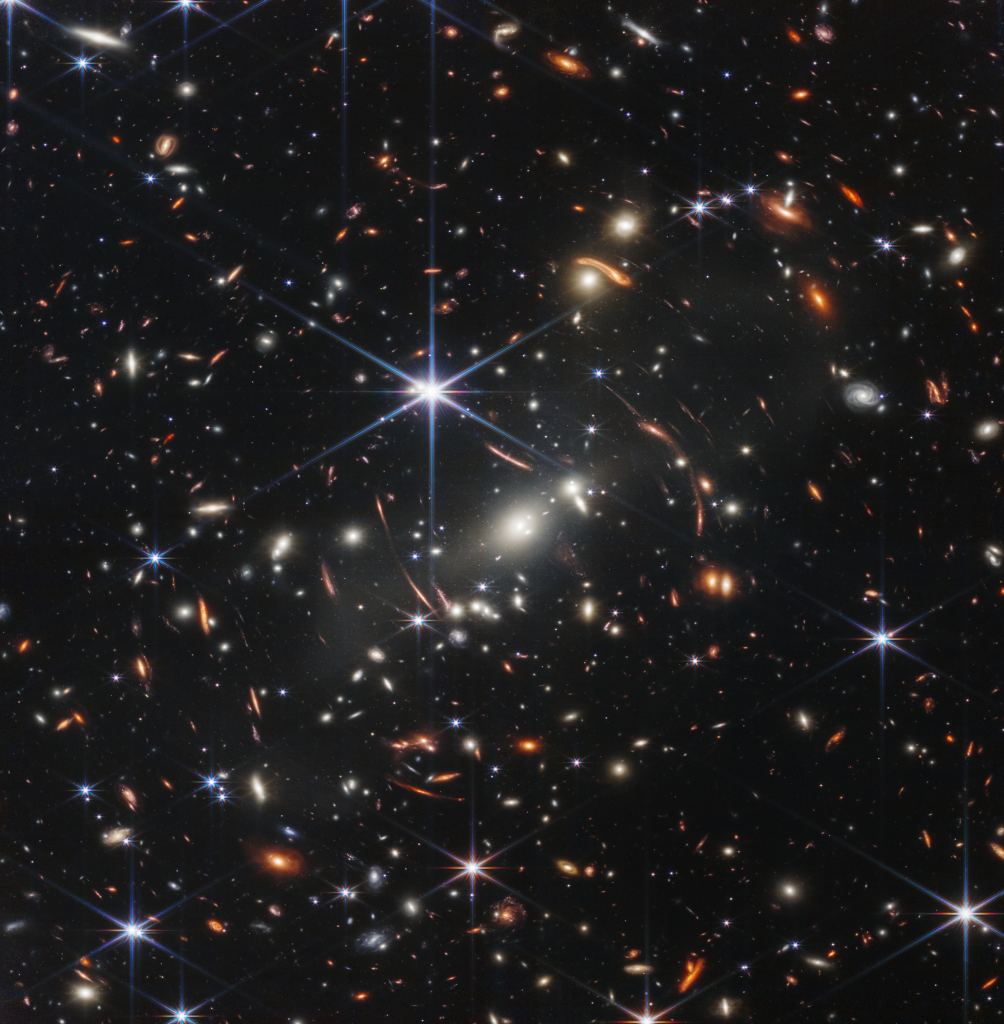 Another interesting tidbit was the speed at which Webb acquired this image and the spectra, which took mere hours. For comparison, Rigby explained that it took Hubble weeks to obtain a deep field image of this same galaxy cluster. The depth, detail, and speed with which Webb acquired this image showcase how the observatory is a fitting successor to the venerable Hubble and builds on its incredible legacy!

The second image consisted of spectra obtained by Webb’s Near InfraRed Imager and Slitless Spectrograph (NIRISS) from WASP-96b, a hot gas giant located about 1,000 light-years away. The Canadian Space Agency (CSA), which provides the NIRISS instrument, was originally intended to present the image. Due to a technical issue, the presentation was made by Knicole Colón, NASA’s Deputy Project Science for Exoplanet Science at NASA Goddard.

The spectrographic image shows the composition of WASP-9b’s atmosphere, which showed a significant amount of water vapor. As Colón explained, the data was obtained during a transit, when WASP-96b passed in front of its star (relative to Webb’s position). As light passed through the atmosphere, Webb characterized it using its advanced spectrographs. This image effectively showcases how Webb will characterize the atmospheres of planets, be they beyond the Solar System or inside it. 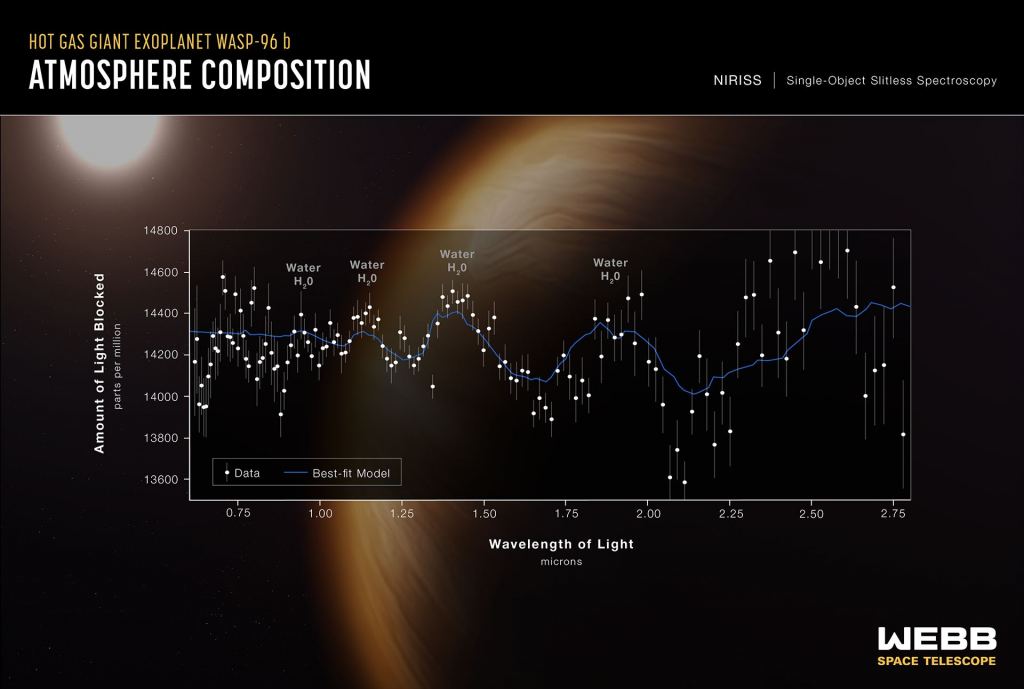 Next was the side-by-image of the Southern Ring planetary nebula presented by the Space Telescope Science Institute (STSI). The image shows the expanding cloud of gas surrounding a dying star (located approximately 2,000 light-years away from Earth) as it appeared to both the NIRCam and MIRI. The resulting images provide the most detailed view of this iconic nebula and the stellar remnant at its core – and in multiple wavelengths.

In the NIRCam image, a white dwarf appears to the lower left of the central white dwarf (which is much brighter) and is partially hidden by a diffraction spike. The same star appears brighter, larger, and redder in the Mid-Infrared Instrument (MIRI) image, a visual effect caused by the thick layers of dust enshrouding the star. An easter egg was a background galaxy visible on the far left side of the image (seen through a relatively thin patch of nebular dust).

The fourth image was a composite of Stephan’s Quintet, a compact galaxy group located 290 million light-years away in the constellation Pegasus. Presented by the ESA science team at Europe’s Spaceport, the image beautifully illustrates the composition and tidal interactions of four galaxies in the process of merging. It was obtained by the Near-Infrared Spectrograph (NIRSpec) and MIRI instruments, which captured light in multiple wavelengths and provided never-before-seen details about this galaxy group.

These include sparkling clusters of millions of young stars, starburst regions where new stars have just formed, and sweeping tails of gas, dust, and stars being pulled back and forth by the gravitational interaction of the galaxies. Most dramatically, Webb‘s MIRI instrument also captured the huge shock waves (the red and gold region surrounding the central pair of galaxies) produced by NGC 7318B smashing through the cluster. 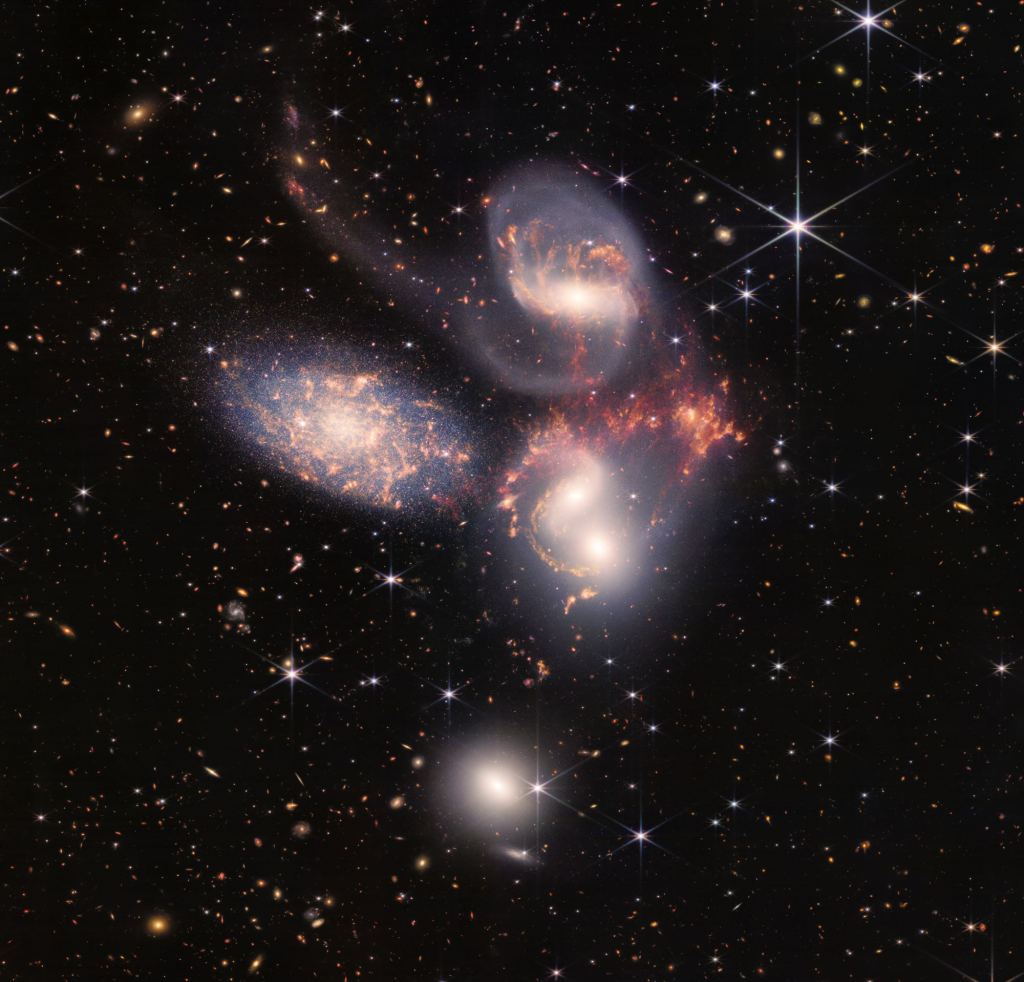 Amber Straughn, the Deputy Project Scientist for the JWST mission at NASA Goddard, presented the fifth and final image. The image features the Carina Nebula, one of the largest and brightest nebulae in the sky, located about 7,600 light-years away in the southern constellation Carina. Once again, this nebula was previously observed by Hubble, which provided a breathtaking look at a prominent star-forming region. But thanks to Webb‘s superior infrared imaging capabilities, this new image captures details that were previously invisible to astronomers.

For starters, there’s the central feature known as the “cosmic cliff,” which looks like a craggy mountainside. This is, in reality, the edge of the gigantic gaseous cavity carved within the nebula by the intense ultraviolet radiation and stellar winds from the extremely massive, hot, young stars located in the center of the bubble (at the top of the image). This image also reveals previously-unseen newborn stars, a more detailed look at the gas and dust of the nebula, and the interaction between solar wind and gas clouds.

Thanks to the crisp resolution and unparalleled sensitivity of Webb‘s Near-Infrared Camera (NIRCam), this image is already providing fresh insight into how “stellar nurseries” work and how new stars are born. 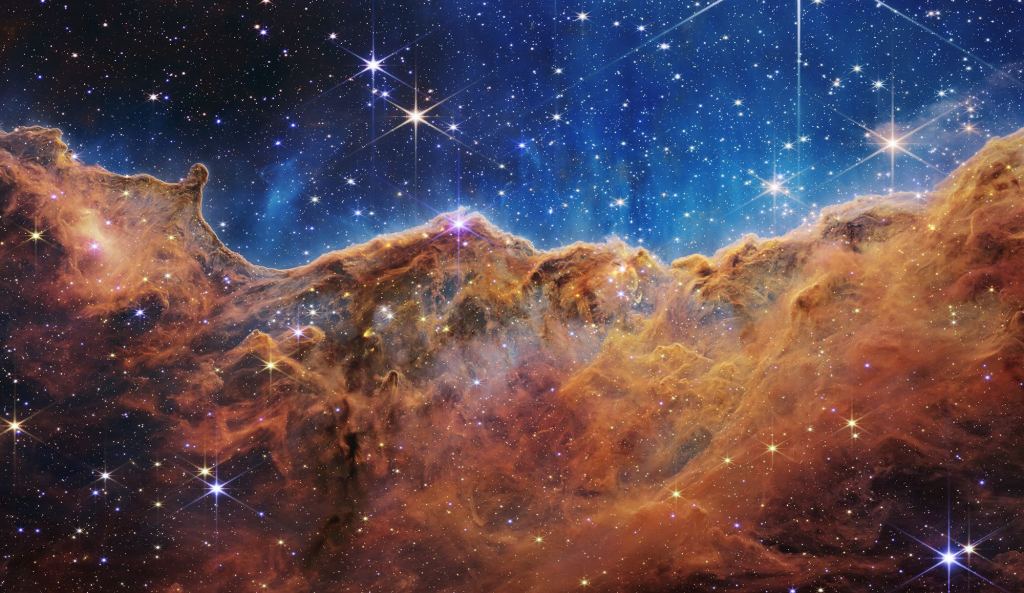 The development of this next-generation telescope officially began in 1996 as an intended successor to the Hubble Space Telescope (HST). These efforts were largely motivated by the success of the Hubble Deep Fields campaign, which provided the deepest views of the Universe to date. They were further motivated by the Cosmic Background Explorer (COBE), which mapped the Cosmic Microwave Background (CMB) from 1989 to 1993. In short, these two surveys allowed astronomers to observe the early Universe and how it all began with the Big Bang.

Now they wanted to see what happened in-between, which included the formation of the first stars and galaxies and how they evolved into the large-scale cosmic structures we see today. After a redesign, multiple tests, delays, cost overruns, and the COVID pandemic, Webb finally launched from Europe’s Spaceport in French Guyana on Christmas Day in 2021. Once it reached orbit, the mission team spent weeks unfolding its sunshield, deploying and aligning its primary mirror, cooling the observatory to operational temperature, and navigating Webb to its orbit – about 1.5 million km (930,000 mi) from Earth.

Since then, the JWST has been conducting science operations and observing different cosmic objects and phenomena. These images provide a good preview of what we can expect in the coming years as more and more images are released. The event wrapped up with Administrator Bill Nelson praising the teams responsible for James Webb and the international cooperation that made it possible. He finished by repeating the words of the late and great Carl Sagan:

“Somewhere, something incredible is waiting to be known.”

The post They’re Here! Check out the First Images from the James Webb Space Telescope! appeared first on newsastronomy.com.