According to the most widely-accepted theory by astronomers, planetary systems begin as massive clouds of gas and dust (aka. a nebula) that experience gravitational collapse at the center to form new stars. The remaining matter in the system forms a “circumplanetary disk” around the star, which gradually accretes to form young planets. Studying disks in the earliest stages of planetary formation could help answer some hard questions about how the Solar System formed over 4.5 billion years ago.

Studying these disks requires observatories capable of capturing light in the far-infrared part of the spectrum – precisely what the Atacama Large Millimeter/submillimeter Array (ALMA) was built for. While studying a young star (AS 209) located about 395 light-years from Earth in the constellation Ophiuchus, a team of scientists observed a circumplanetary disk that appeared to have a Jupiter-mass planet embedded in it. This could constitute the youngest exoplanet ever detected, and its continued study could provide a treasure-trove of data for astronomers.

The team included astronomers from the Harvard-Smithsonian Center for Astrophysics (CfA), the Massachusetts Institute of Technology (MIT), the National Radio Astronomy Observatory (NRAO), the National Astronomical Observatory of Japan (NAOJ), the Max-Planck-Institute for Astronomy (MPIA), the Centre National de la Recherche Scientifique (CNRS), the Chinese Academy of Sciences, and universities and research institutes from the U.S., U.K., France, Germany, Italy, the Netherlands, Chile, Japan, and China. The paper that describes their findings was recently published in The Astrophysical Journal Letters.

The research team observed this system as part of the Molecules with ALMA at Planet-forming Scales (ALMA MAPS), a scientific collaboration that has spent the past five years studying the K-type (orange) dwarf star known as AS 209. This system was particularly interesting to them because of its disk, which comprises seven nested rings (one within another). Consistent with the Nebular Hypothesis, these rings are believed to be associated with ongoing planet formation, where individual rings act as “feed bands” that eventually merge to form a planet.

Where these planets form in relation to their host star is believed to have a direct bearing on their composition, with rocky planets located closer to the star while gas and ice giants are located farther out. However, recent exoplanets studies have challenged these theories, showing that planets may form in one location and migrate to another. This aspect of AS 209 made it a particularly fascinating subject for study, mainly because of the exoplanet candidate’s distance from its star and the parent star’s age.

In the case of the former, the Jupiter-mass planet orbits its star at a distance of more than 200 Astronomical Units (AUs), or 2.992 billion km (18.59 billion miles). In comparison, Jupiter orbits the Sun at a distance of about 5.2 AUs – 742 million km (461 million mi). This is inconsistent with currently-accepted theories of planet formation. In the latter case, the parent star is estimated to be just 1.6 million years old, which means that this potential exoplanet may be the youngest ever observed.

These new results provide further evidence that planet formation is taking place around this young star. However, the team responsible acknowledges that further study is needed to confirm the existence of a Jupiter-mass planet there. According to Jaehan Bae, a professor of astronomy at the University of Florida and the paper’s lead author, these observations will benefit from next-generation telescopes. “The best way to study planet formation is to observe planets while they’re forming,” he said. “We are living in a very exciting time when this happens thanks to powerful telescopes, such as ALMA and JWST.” 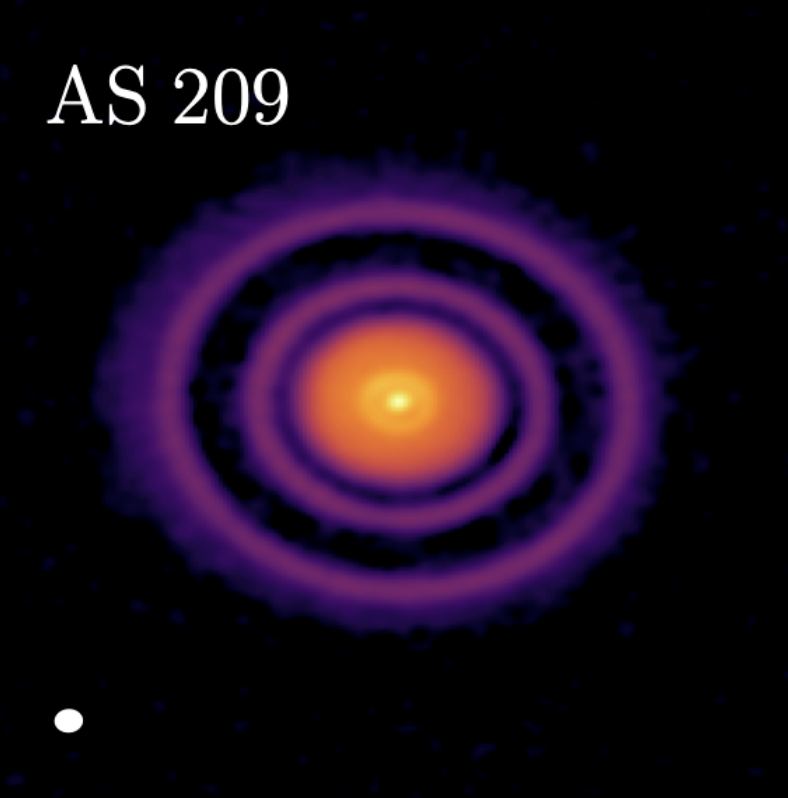 AS 209 is a young star in the Ophiuchus constellation that scientists have now determined is host to what may be one of the youngest exoplanets ever. Credit: ALMA (ESO/NAOJ/NRAO)/A. Sierra (U. Chile)

One of the main scientific objectives of the JWST is to study debris rings around young stars and other objects that are difficult to observe due to clouds of dust and gas. The presence of these clouds obscures light in the visible wavelength, making objects within and beyond them difficult to study with optical telescopes. But with its advanced suite of infrared instruments, ALMA and the JWST can visualize debris rings and objects within dense clouds because of the light they radiate in infrared wavelengths.

In particular, Webb‘s instrument allows it to observe the cosmos in the near- and mid-infrared wavelengths, which should provide some immense insights into AS 209 and other young star systems that still have circumplanetary disks. Moreover, these results and future studies could provide further evidence that there are circumplanetary disks around exoplanets. While astronomers have long suspected this, they could not prove it until 2019, when ALMA made the first-ever detection of a circumplanetary, moon-forming disk.

The new observations of gas in a circumplanetary disk at AS 209 could tell astronomers more about how planetary atmospheres and systems of moons are formed. These findings will inform future studies of the gas giants (particularly Jupiter) and how their icy moons formed during the early Solar System.

The post The Youngest Exoplanet Ever Seen? appeared first on newsastronomy.com.