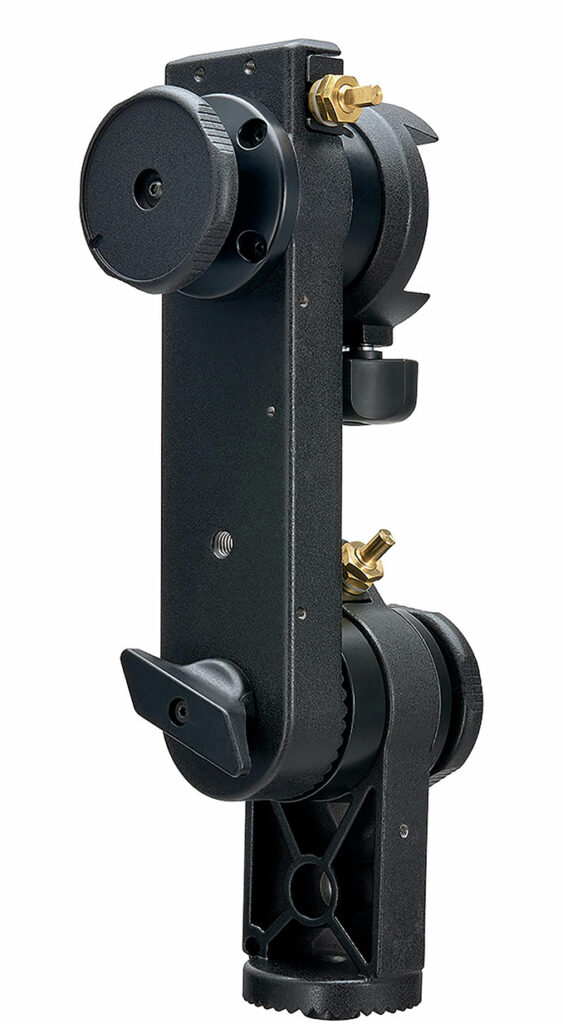 Short, ready-to-go telescopes have burgeoned in popularity since the devising of the special ED (Extra-low Dispersion) glasses that has made their compactness possible. Their portability has been useful for those needing to take their observing to a remote dark-sky site – and not forgetting those who have limited space at home too. Riding on the same wave of minimalistic convenience, the mounts employed to carry such telescopes have enjoyed a similar reductionist evolution.

An alt-az mount is no doubt the simplest and most intuitive style of telescope support to use, but simplicity need not mean a lack of ingenuity, elegance or robustness, as I found upon receiving the Mount Zero from ScopeTech. 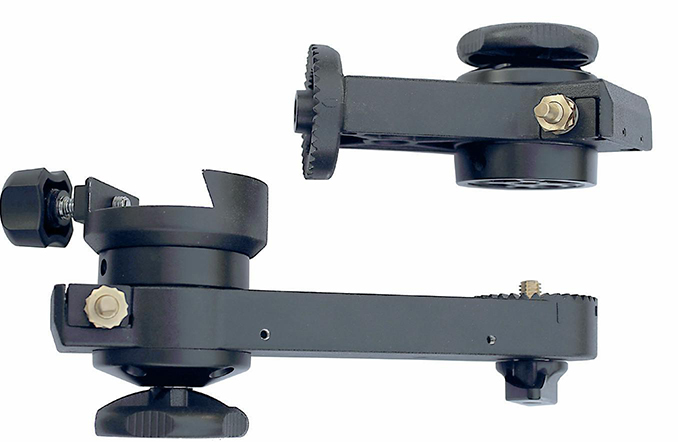 The two elements of the Mount Zero decoupled, ready for reassembly into their operational mode. All images unless otherwise specified: Steve Ringwood.

Out of the box

Simplicity starts with the construction of the Mount Zero, which comprises a pair of arms that have two assembly configurations, one for storage and the other for when in use. The former is so cleverly contrived that when stowed, its 1.4-kilogram weight occupies barely 25 × 10 × 10 centimetres. It’s so airline friendly, you could store it in a shoebox! Yet when in use this rigid structure (essentially a single-arm fork) can wield payloads of up to seven kilograms.

Once the two parts are disassembled from their stowage configuration, the azimuth base arm is joined to the altitude arm via a single clamping screw, bringing two multi-toothed surfaces (called a Hirth joint) together in a vice-like grip. The azimuth base arm offers tripod bush fittings, while the altitude arm is fitted with a Vixen-style dovetail puck. Both axes are fitted with slow-motion controls, with their degree of friction controlled by a basic clutch mechanism.

I began in conventional fashion by setting the altitude arm perpendicular to the base. I then attached the Mount Zero to a Sightron carbon fibre tripod loaned to me by First Light Optics for the review. This is a stable and exceedingly strong carbon-fibre tripod with a payload capacity of 30 kilograms, so it handled the Mount Zero and my various test instruments with alacrity.

Simplicity starts with the construction of the Mount Zero, which comprises a pair of arms that have two assembly configurations, one for storage and the other for when in use. 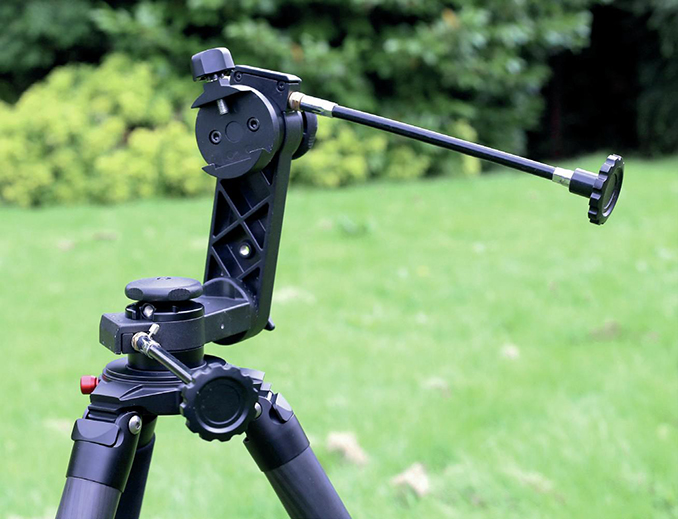 The Mount Zero ready for action, deployed atop a Sightron carbon-fibre tripod. 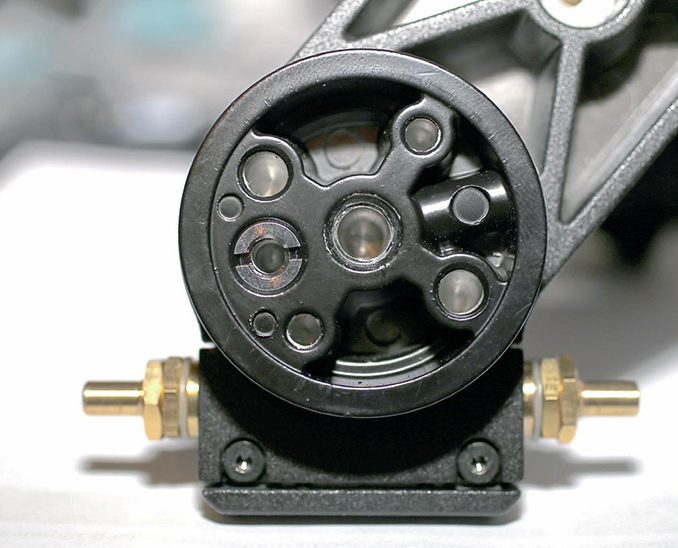 The base of the Mount Zero is fitted with a 3/8-inch thread and cleverly incorporates a 1/4-inch adaptor if required. 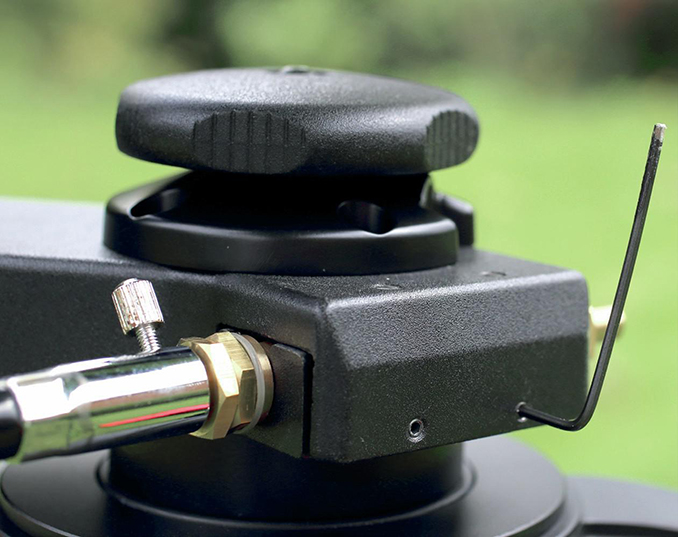 Backlash on the slow-motion gears can be removed via grubscrews. 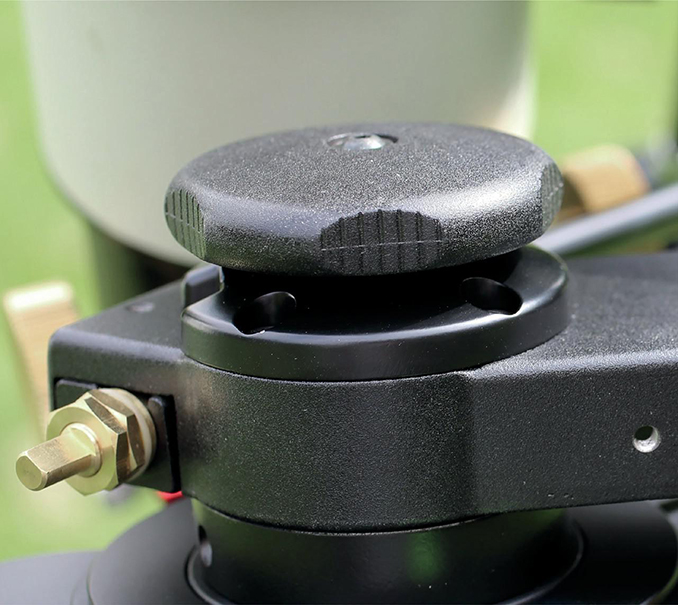 Tension on each axis is controlled by large, glovefriendly knobs.

The first test ‘payload’ was my OpticStar AR90, a 90mm, f/5.5 refractor which, together with a finder, a star diagonal and an 8–24mm zoom eyepiece, gave the Mount Zero 3.5 kilograms to think about. Once I had carefully balanced the 60-centimetre-long telescope in the Vixen clamp, I set out to discover how well behaved this mount would be.

I have to report that I was delighted. Once I had set the gear tensions just right, I was able to (gently!) manhandle the telescope to any position. Once there, I could then impart fine motion by means of the slow-motion (ballbearing) worm and gear controls. Flexible slow-motion control rods are an optional extra for this kit (but in my view they are necessary). Fortunately, I was able to commandeer a pair that I already owned, since the fitting is the standard 6mm connector.

I was very impressed by the degree of tension control available on each axis, exerted merely though single (glove friendly) knobs. Once the telescope was well balanced, I could clamp lightly to allow motion imparted by finger-light pressure – or a little tighter for a firmer feel – with smooth action throughout this range. This is clearly a sign of fine engineering.

The same goes for the slow-motion controls, which have action as smooth as silk. I did, however, detect just a fractional delay in motion at the onset of each turn on the control rod – this being due to the teeth of the worm and gear on the slow motions not quite meeting together (known as backlash).

Yet my discovery of ScopeTech’s thoughtful design continued, as I found that each of the gear units includes a pair of grubscrews that allow fine adjustment for rectifying this backlash. It took only a few moments with an Allen key to remove this problem, which was eradicated without impacting the smoothness of the slow-motion action. I was very impressed. 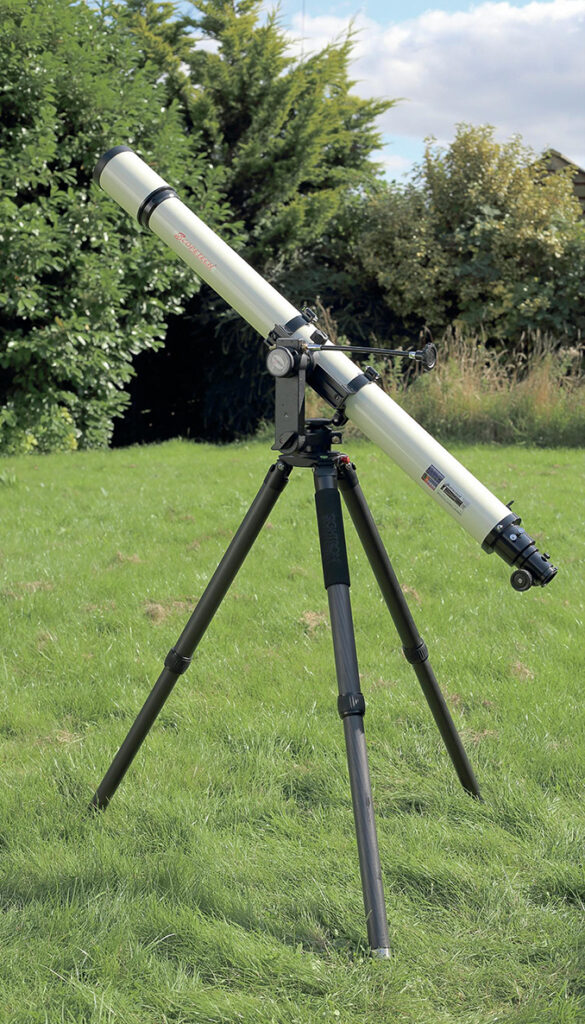 The Mount Zero is easily capable of manoeuvring the 1.25-metres of ScopeTech’s STL-80A Maxi 80mm, f/15 classical refractor. Access to higher elevations is where the Hirth joint comes in, which gives even relatively long telescopes access to the zenith by means of setting the Hirth joint to the angle required.

Tested at night, while observing Jupiter and Saturn, I found that I could track their sidereal motion smoothly. With the alt-az tensions set correctly, I could swing around to any object in the sky without having to unclamp and clamp again.

As a severe test of control, I ramped up the magnification and found that with simultaneous use of the azimuth and altitude gears, I could track Jupiter’s motion without any difficulty at all.

I threw at the Mount Zero other instruments with different potentials of momentum to test its capability, including a bulky Celestron C5, a richfield 115mm Newtonian reflector and a ScopeTech f/15, 80mm refractor (a review of which will appear in a forthcoming issue). All were served well by this plucky, finely engineered mount.

Given the variety of instruments that I used, it will be clear that when observing near the zenith, a telescope may be impeded by contact with the base unit and tripod legs. For the solution, I have (of course) saved the Mount Zero’s neatest trick for last.

The Hirth joint comes together with teeth set at 10-degree intervals. This means that upon assembly, the two pieces of the Mount Zero can be joined at 90 degrees, 0 degrees, or any steps of 10-degree increments in between. Consequently, the altitude arm can be set to lean out from the base with a desired angle sufficient to provide space beneath the gripped telescope for zenith viewing.

Even for the challenging 1.25-metre length of the f/15 refractor, I was able to set the angle of the altitude arm sufficiently distant from the tripod apex for zenith viewing.

…the altitude arm can be set to lean out from the base with a desired angle sufficient to provide space beneath the gripped telescope for zenith viewing.

For those who might have fittings in mind other than the dovetail clamp, the puck is entirely removable to allow other means of attachment.

Plus, there are standard Takahashi 35mmseparation-threaded holes on the arm, which means that it is possible to attach a Takahashi clamshell directly.

My only minor gripe (and after all this praise it is actually a difficult one to find) is that there is, at the time of writing, no English translation of the otherwise very fulsome and well-illustrated Japanese instruction manual. Fortunately, both assembly and use are pretty much intuitive and info sheets are available on First Light Optics’ website. But the manual hints at additional bells and whistles waiting to be discovered.

This is a cleverly designed, eminently portable, robust alt-az mount that is ready for action in seconds to provide exquisitely smooth control.

Tripod attachment: 3/8-inch tripod mount at the base, which includes a 1/4-inch bushing adaptor

Steve Ringwood is a regular contributor to Astronomy Now. 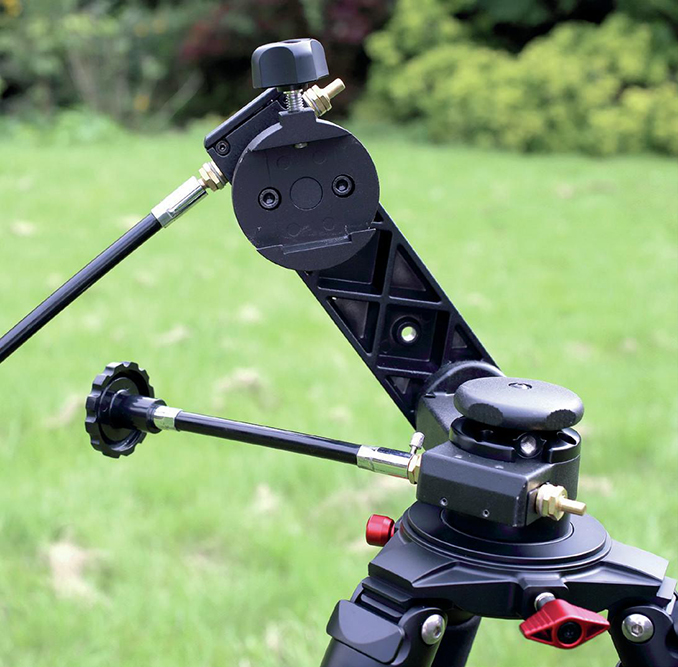 The Hirth joint can be set at an angle that permits zenith access.