News Astronomy > News > The Most Threatening Asteroid Just got Downgraded to “Harmless”. No Impact in 2052

It’s comforting to know that there are people who are literally paid to watch the night sky to ensure that at least we’ll be informed if an asteroid will hit the Earth. Technology and near-Earth surveys have become advanced enough that the likelihood of a planet-killer-sized asteroid coming out of nowhere, as is so prevalent in modern media depictions, is extremely unlikely. Even smaller ones, which would only wipe out a city or part of a continent, get enough attention to tell if they pose a threat or not. And in advance of Asteroid Day 2022, which happened on June 30th, ESA is proud to announce they were able to remove one of the most threatening asteroids from their potential impact list.

The asteroid, known as 2021 QM1, was first detected at the Mount Lemmon observatory on August 28th, 2021. It was just one of around a dozen near-Earth asteroids that were discovered that night and initially didn’t cause any alarm. But follow-up observations put it on a potential near-miss path with Earth sometime around 2052.

Coming in at about 50 m in diameter, 2021 QM1 would pack enough punch to release the equivalent of almost six megatons of TNT into the atmosphere at the height of only 9 kilometers. To compare it to the most commonly used metric for high energy impacts, 400 times the strength of the nuclear bomb dropped on Hiroshima.

Only once in recent history has an asteroid of that size impacted Earth. Luckily the Tunguska, which released a whopping 12 megatons of energy, and whose date the Annual Asteroid Day memorializes, happened over a remote part of Siberia. So while it flattened 2150 sq kilometers of forest, only around three people are thought to have died in the event. But if such an impact happened over a population center, the result could be catastrophic.

That event was surely in the back of asteroid defenders’ minds while collecting follow-up data on 2021 QM1. Unfortunately for their nerves, another astronomical event would put them on edge for a little while. The asteroid disappeared behind the sun for a few months, making further observations impossible.

Patience is a virtue for most scientists, so they patiently waited and planned to collect more data with one of the best weapons in their asteroid-hunting arsenal – the Very Large Telescope. When the asteroid peaked out from behind the sun, they were ready. And they managed to capture an image of the faintest asteroid ever observed. 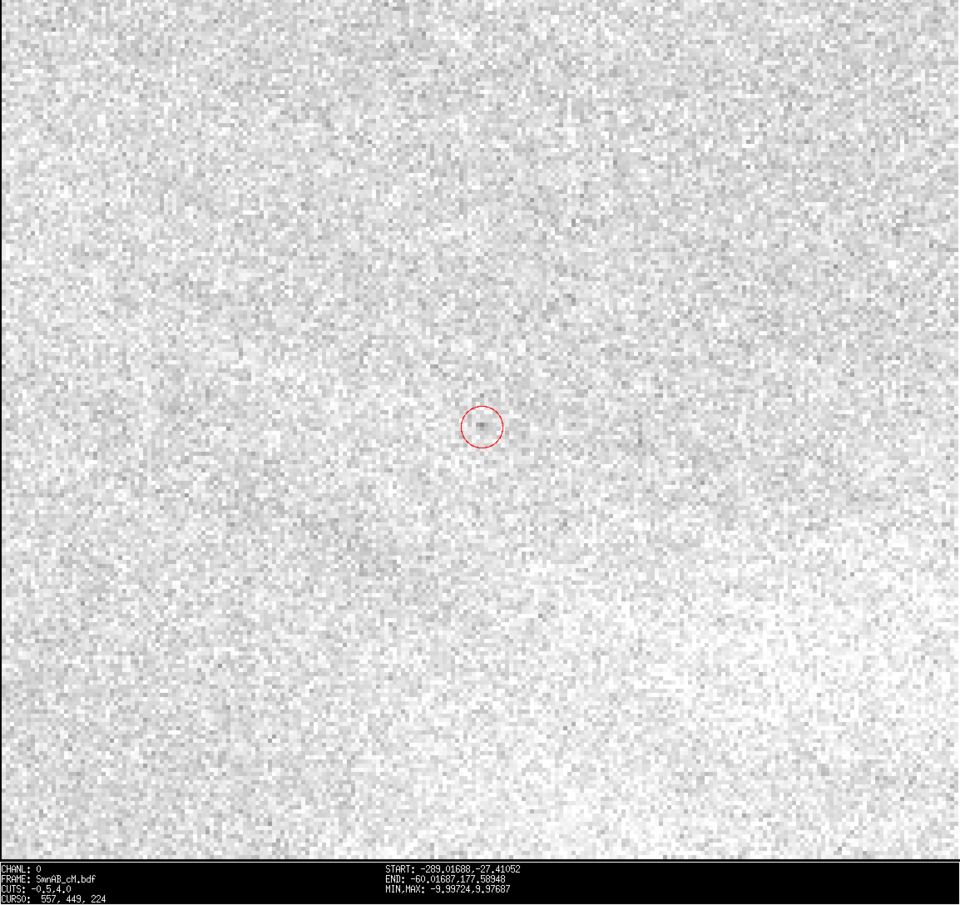 This was what the astronomers had to find. The dot in the middle of the red circle is 2021 QM1.
Credit – ESO / O. Hainaut

That observation showed them there is a 0% chance that 2021 QM1 will hit Earth in 2052, as initially predicted. Its orbital path won’t create a hazard at all for the foreseeable future.

2021 QM1 isn’t the first asteroid removed from the dangerous list after a sub-optimal blocking maneuver by another heavenly body. In February, ESA removed another asteroid from the list after the moon blocked observations. At the time, 2022, AE1, as that asteroid is known, had a much more imminent potential collision window – July 4th, 2023. The 70 m rock could have caused even more damage than 2021 QM1 and might have potentially been the most destructive fireworks display of all time.

This all begs the question of what would we actually do if another asteroid is found with a potential impact event? Many plans are in place, and they are better discussed in other articles, but needless to say, the teams of asteroid defenders will continue to keep a lookout. And for now, at least, there’s nothing to worry about.

Gif of 2021 QM3’s orbital path around the Earth and the sun.

Learn More:
ESA – Impact in 2052 ruled out as ESA counts down to Asteroid Day
ESA – Faintest-ever asteroid observations reveals 2021 QM1 is safe
UT – Astronomers Just Practiced What Would Happen if a Potentially Dangerous Asteroid was Detected
UT – You Can Blow Up an Asteroid Just a few Months Before it Hits Earth and Prevent 99% of the Damage

Lead Image:
Backdrop of stars that astronomers had to search in order to find asteroid 2021 QM1
Credit – ESO / O. Hainaut

The post The Most Threatening Asteroid Just got Downgraded to “Harmless”. No Impact in 2052 appeared first on newsastronomy.com.