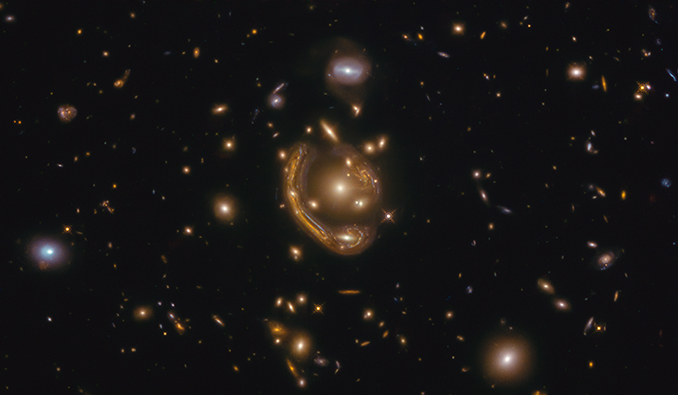 The great sculptor of the Universe is gravity. It is gravity’s force that assembles the galaxies into arrays of cartwheeling spirals, flocculant sunflowers and immense ellipticals. But gravity doesn’t just operate on matter; it can also influence light by bending the very space–time that light is passing through. This can have some dramatic and artistic effects, as seen in this Hubble Space Telescope image.

What are we looking at here? It looks like a sea of galaxies, but with some extraneous filamentary material floating through it. The ‘sea’ is a galaxy cluster, while the ‘floating filament’ is actually a gravitationally lensed galaxy, distorted beyond all recognition by the immense gravity of the foreground cluster, which is located in the Southern Hemisphere constellation of Fornax, the Furnace. Gravitational lensing occurs when gravity bends space–time to such a degree that it can act as a magnifying lens, warping and amplifying the light of more distant galaxies. In this case, the background galaxy is almost perfectly aligned with the giant elliptical galaxy at the centre of the cluster, resulting in an ‘Einstein ring’, whereby the light of the background galaxy is bent all around the foreground elliptical galaxy. It’s the largest Einstein ring known. We can even see where other galaxies in the cluster are creating additional distortions, such as the edge-on galaxy just below the central elliptical, which is causing some of the lensed image to warp around it. Such is the magic of gravity! Image: ESA/Hubble and NASA/S. Jha.