On February 18th, 2021, the Perseverance rover landed in the Jezero Crater on Mars. Since then, Perseverance has been exploring the region in search for evidence of past (and possibly present) life – much like its cousin, the Curiosity rover. This includes obtaining samples that will be placed in a cache and retrieved by a future ESA/NASA sample-return mission. These will be the first directly-retrieved samples of Martian rock and soil that will be analyzed in a laboratory on Earth, which are expected to reveal some tantalizing bits about the history of the Red Planet.

But it appears that we don’t need to wait on the sample-return mission since the Perseverance rover is already sending some surprising data back to Earth. According to a new study by a research team led by the University of California at Los Angeles (UCLA) and the University of Oslo, Perseverance’s ground-penetrating radar detected that the rock layers beneath the crater are strangely inclined. These strange sections could have resulted from lava flows that slowly cooled or could be sedimentary deposits from an underground lake.

The research team was led by Svein-Erik Hamran, a Professor of autonomous systems and sensor technologies at the University of Oslo (UiO) and the Principle Investigator of the Radar Imager for Mars subsurFAce eXperiment (RIMFAX) aboard the Perseverance rover. He was joined by researchers from UiO, UCLA, the Planetary Science Institute (PSI), Vestfonna Geophysical, the Centro de Astrobiología, the Norwegian Polar Institute, NASA’s Jet Propulsion Laboratory, and multiple universities. The paper that describes their findings recently appeared in the journal Science Advances. 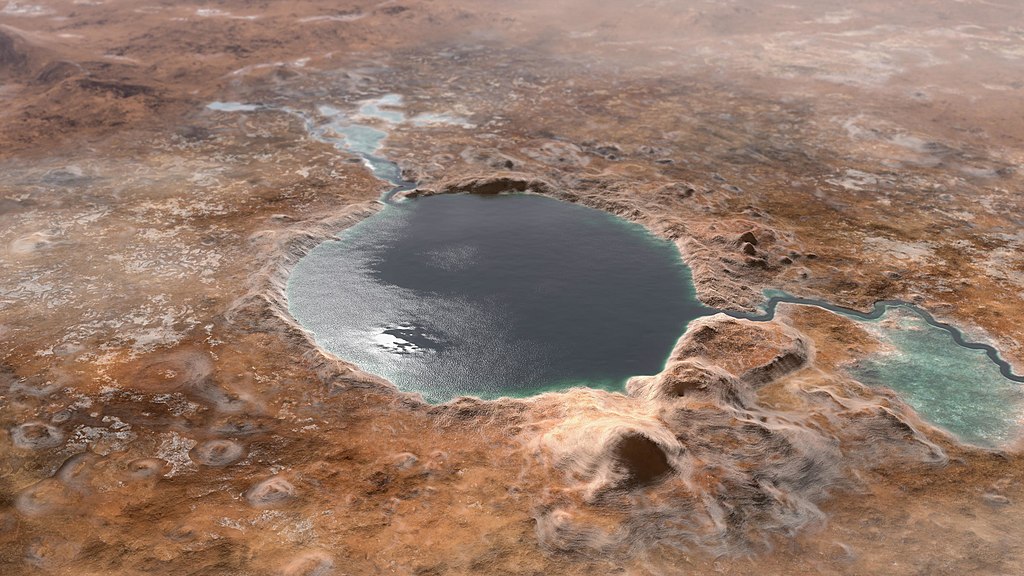 Artist’s impression of what the Jezero Crater once looked like billions of years ago when water flowed into it. Credit: NASA/JPL-Caltech

The Jezero Crater, located in Syrtis Major Planum between the Northern Lowlands and Southern Highlands, measures about 45 km (28 mi) in diameter and is believed to have once been a lake. This region was specifically selected as the landing site for Perseverance, which has been exploring the large deposits of rocks and clay minerals deposited at its western edge, where water once flowed into the crater. Like Curiosity, the purpose is to learn more about the periods when Mars had flowing water on its surface so scientists can get a better idea of how (and when) it transitioned to the cold, arid planet it is today.

As they indicate in their study, the team consulted the first data obtained by the Radar Imager for Mars subsurFAce eXperiment (RIMFAX), which performed the first rover-mounted ground-penetrating radar survey of the Martian subsurface. This survey was conducted as the rover made its initial 3-km (~1.85 mi) hike across the Jezero Crater and provided continuous data on the electromagnetic properties of the bedrock structure beneath the crater to depths of 15 meters (~49 feet) below the surface. The resulting radar images showed layered sequences that dip downward at angles of up to 15 degrees.

David Paige, a UCLA professor of Earth, planetary and space sciences and one of the lead researchers on the RIMFAX, explained in a recent ULCA Newsroom release:

“We were quite surprised to find rocks stacked up at an inclined angle. We were expecting to see horizontal rocks on the crater floor. The fact that they are tilted like this requires a more complex geologic history. They could have been formed when molten rock rose up towards the surface, or, alternatively, they could represent an older delta deposit buried in the crater floor.”

RIMFAX paints a picture of Mars’ subsurface geology by sending bursts of radar waves into the surface, which are reflected by rock layers and other features underground. This allows scientists to determine the shapes, densities, thickness, angles, and composition of underground objects based on how radar waves are returned to the instrument. After analyzing the data, the research team noted that layered rock was common throughout the area surveyed by Perseverance. More perplexing, they also found that the inclined areas had highly-reflective rock layers that tilt in multiple directions.

The most likely explanation for the angled layers they witnessed points toward an igneous (molten) origin, where the movement of magma underground deposited rock layers over time that cooled and solidified. However, there’s also the possibility that the layers are sedimentary, a phenomenon commonly found in aqueous environments on Earth. In this case, the features result from water depositing material over time, which hardens and becomes layered. As Paige said, this brought to mind another familiar Earth feature:

“RIMFAX is giving us a view of Mars stratigraphy similar to what you can see on Earth in highway road cuts, where tall stacks of rock layers are sometimes visible in a mountainside as you drive by. Before Perseverance landed, there were many hypotheses about the exact nature and origin of the crater floor materials. We’ve now been able to narrow down the range of possibilities, but the data we’ve acquired so far suggest that the history of the crater floor may be quite a bit more complicated than we had anticipated.”

The data collected by RIMFAX will be of great value when the samples collected by Perseverance are returned to Earth for analysis. Knowing what lies beneath the Jezero Crater and how it formed will provide the necessary context for characterizing the samples. This will provide a clearer picture of how and when Mars had flowing water on its surface, for how long, and whether this was intermittent or not. It will also indicate how and when Mars transitioned to the extremely cold and dry environment we see there today.

But most importantly, this data could reveal if Mars was ever able to support life on its surface, which would finally answer a question humans have been asking for centuries!

The post The Geology at Jezero Crater is Even More Complex Than Scientists Were Expecting appeared first on newsastronomy.com.