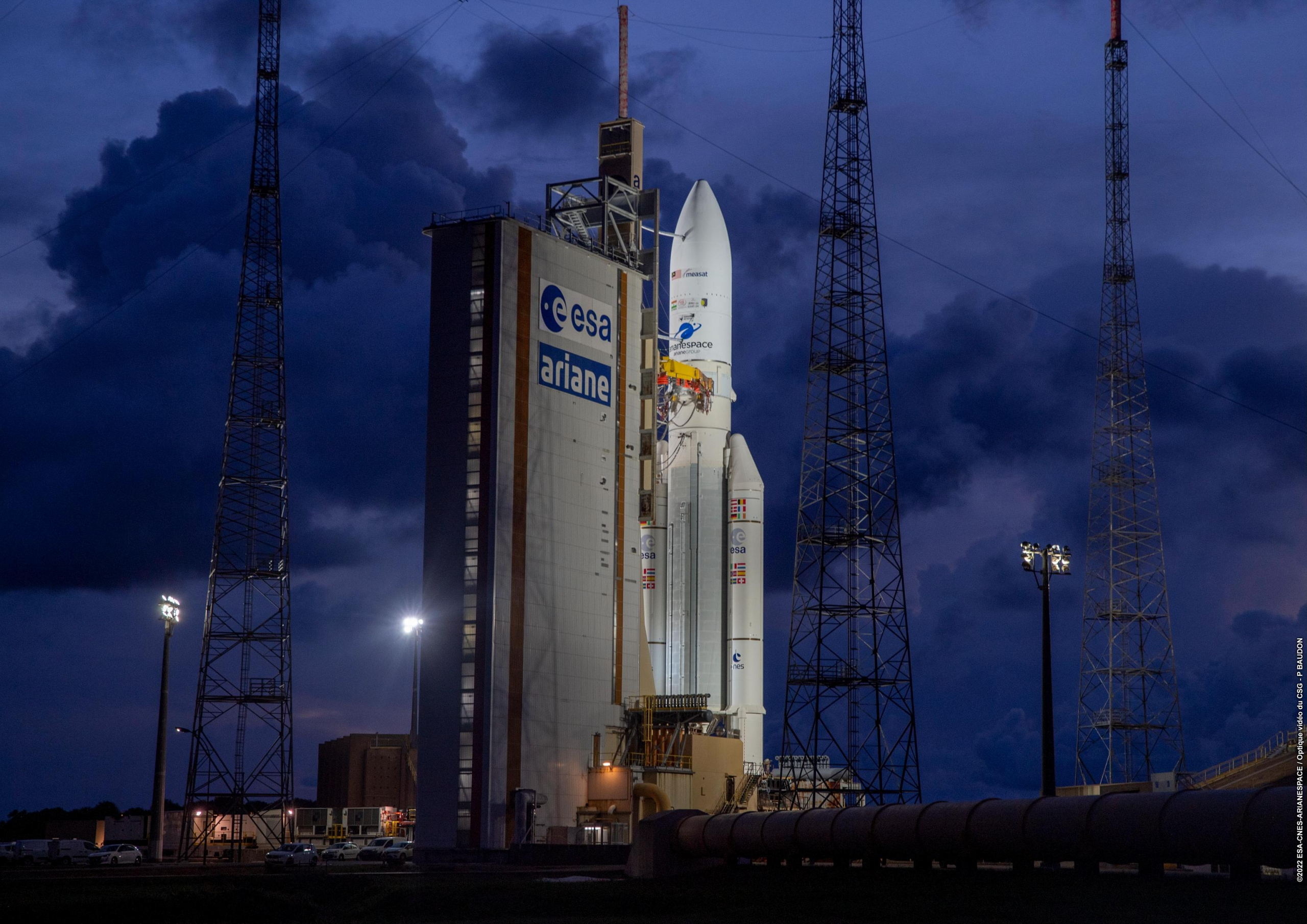 Arianespace, ArianeGroup, and the European Space Agency (ESA) are gearing up for their second flight of the year and the first for the veteran Ariane 5 rocket, which begins its trek toward retirement with the first of its five final planned missions scheduled for lift-off from Kourou in French Guiana at 5:03 PM EDT (21:03 UTC) on June 22.

The overall launch window is open for exactly 100 minutes and will see two satellites taken into a geostationary transfer orbit.

The two payload passengers are MEASAT-3d and GSAT-24, with a total combined mass of 10,849 kg. They will be delivered into a targeted orbit of 250 x 35,786 km inclined 6° to the equator over the course of a 25-minute powered flight ascent to orbit.

Overall, preparations for this mission began years ago with the satellites’ contracts for construction and the overall launch contract agreement with ArianeGroup.

The various components of the rocket, including the sections of the solid rocket boosters, the cryogenic core stage, and the cryogenic upper stage were all transported to French Guiana where assembly of the launcher for flight began on May 13, 2022.

MEASAT-3d, meanwhile, arrived in French Guiana on May 13, followed by the other passenger, GSAT-24, on May 19.

Fueling operations for MEASAT-3d were then conducted on May 30, followed on June 1 by those for GSAT-24.

MEASAT-3d was then integrated on top of the Ariane 5’s SYLDA launch adapter on June 8, followed by fairing integration onto the SYLDA the following day.

GSAT-24 was then integrated directly onto the Ariane 5’s launch vehicle adapter on June 13, followed the next day by the integration of MEASAT-3d under the payload fairing and on top of the SYLDA -– with SYLDA cocooning GSAT-24 inside of it for launch. 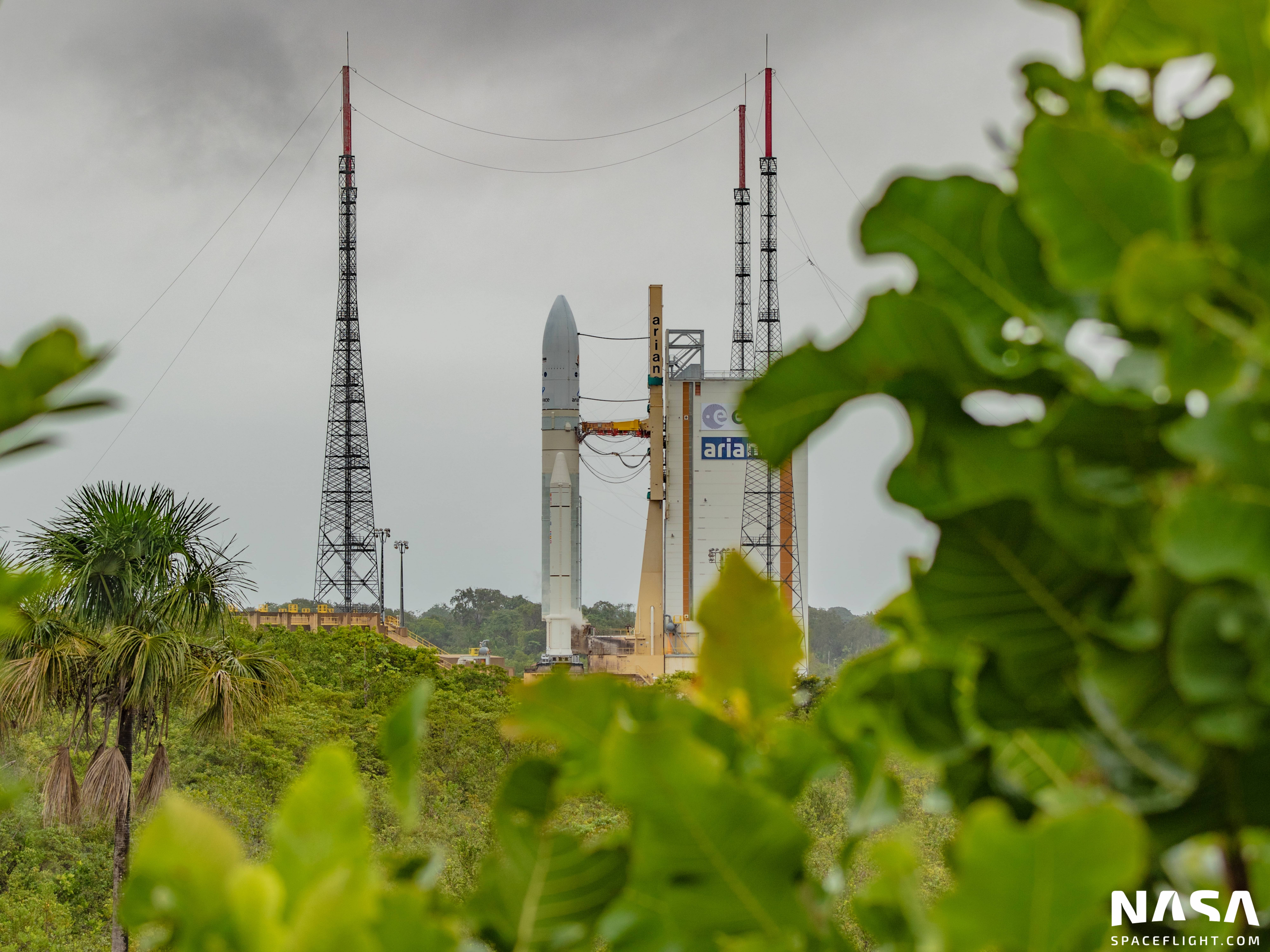 The upper passenger is deployed first, followed by SYLDA separation, and then by the second spacecraft during the deployment sequence of a dual-passenger mission.

With the rocket fully integrated, a full-up launch countdown and mission simulation were performed on June 16 followed by final launch readiness reviews and arming of the launch vehicle’s ordinance on June 17.

The Ariane 5 then rolled out from its Final Integration Building on June 21 and out to its ELA-3 launch pad that day.

Overall, this launch campaign represents the first of the final five flights of the Ariane 5 rocket as it prepares to hand off its lineage to the upcoming successor: Ariane 6.

According to @Arianespace, the final payload spot on an #Ariane5 was sold to @isro last year for GSAT24. So that's it. No places left on Ariane 5s unless someone backs out.

Including the MEASAT-3d/GSAT-24 flight, Ariane 5 has four dual passenger launches to geostationary transfer orbit left on its manifest followed by what is intended to be its final grand finale mission to send the European Space Agency’s JUICE mission on an interplanetary trek to Jupiter.

Today’s flight will be the rocket’s 113th flight overall and — when compared to past flight numbers — will be the second heaviest total payload mass injected into geostationary transfer orbit by the launcher, barely coming in under the ViaSat-2 / Eutelsat 172B launch’s total injected mass of 10,865 kg — just 2 kg more than today’s total mass of 10,863 kg when the satellites and hardware injected into the orbit are all accounted for.

The heaviest payload ever launched by the Ariane 5 was the 20,293 kg Georges Lemaitre Automated Transfer Vehicle to the International Space Station in July 2014.

MEASAT-3d is a 5,648 kg telecommunication satellite built by Airbus Defense and Space around the Eurostar E3000 satellite bus.

It will be used as part of the Korean Augmentation Satellite System, called KASS, to improve air traffic management in South Korea while also focusing coverage over the larger Malaysian region throughout an 18-year lifetime.

Take a look at what is going to happen tomorrow during our Flight #VA257 with MEASAT-3d and GSAT-24 onboard @Ariane5!

The satellite will significantly enhance broadband speeds of up to 100Mbps in areas with limited or no terrestrial networks throughout Malaysia while providing redundancy to and additional capacity for video in HD, 4K, and ultimately 8K in the Asia-Pacific region.

After being dropped off in geostationary transfer orbit, the satellite will deploy its two solar arrays to begin generating 12 kW of power and then use its onboard engine to raise its orbit and place itself in its intended 91.5° East geostationary orbital slot.

Overall, the satellite carries C- and Ku-band transponders for direct-to-home services as well as a Ka-band payload with multiple user spot beams for high-speed broadband communication.

Additionally, the first Q/V band payload for the Asia-Pacific region will be launched on this mission and will help study the effects of high rainfall on communication channels to aid the design of the next generation of satellites that need to contend with this reality in the region.

The overall MEASAT program traces its inception to 1993 when the then Malaysian Prime Minister called for an end to the government’s monopoly on communications. MEASAT, which stands for Malaysia East Asia Satellite, then entered service with the launch of the first satellite in January 1996.

How it left vs. how it arrived

On the right: unloading the satellite in Kourou.

MEASAT-3c was not its own satellite and was intended as a Ku- and S-band lease on the now-canceled Jabiru-1 satellite from Australia.

This satellite marked the final sale of a payload slot for the Ariane 5 as confirmed by Arianespace earlier this year.

The first of its kind “demand-driven” mission for NewSpace India Limited, GSAT-24 is a 4,181 kg satellite built on the I–3K satellite bus for India. 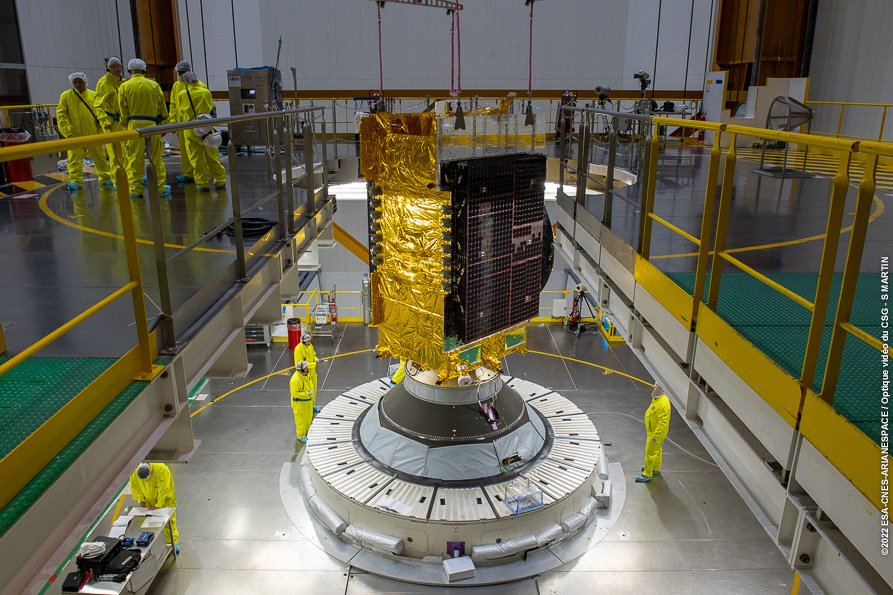 While built and owned by ISRO, NewSpace India Limited has leased the rights for operations and use of the entire satellite.

It will operate primarily in the Ku-band through 24 bands.

Overall, this will mark the 25th Indian satellite launched by Arianespace and the 11th of the GSAT series launched by the company in a relationship that stretches back 42 years to 1981 with the launch of the APPLE satellite on Ariane 1.

(Lead image: Ariane 5 on the pad for the MEASAT-3d/GSAT-24 launch. Credit: ESA/CNES/Arianespace)