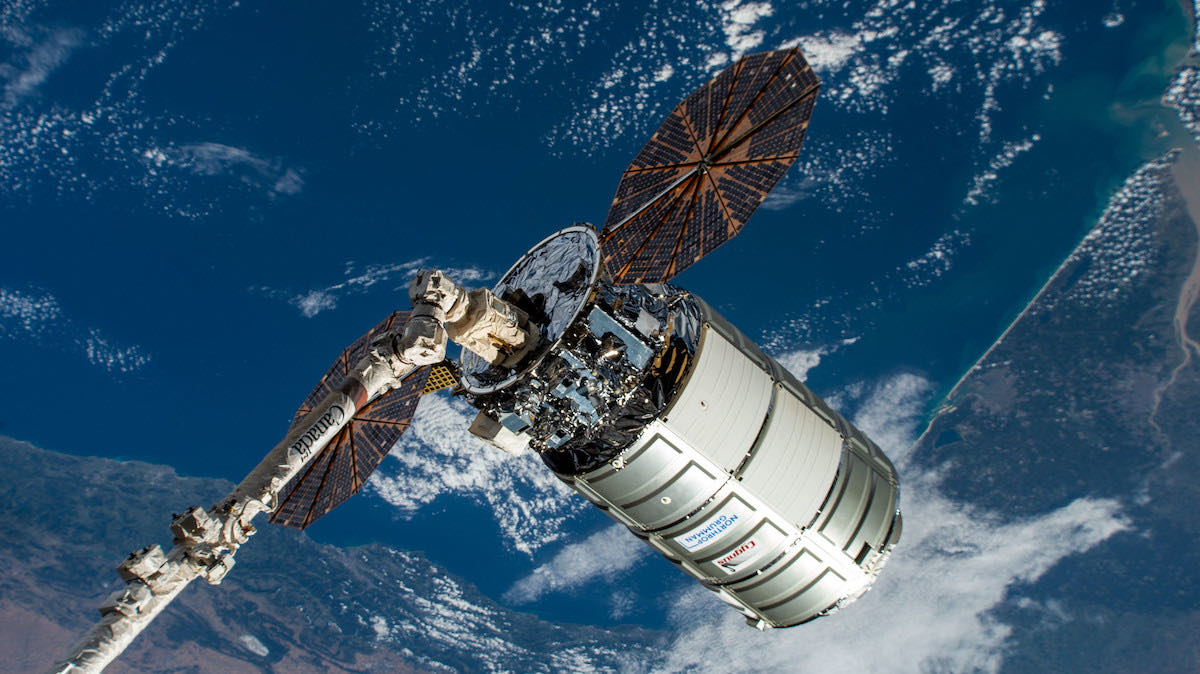 A Northrop Grumman Cygnus spacecraft in the grip of the International Space Station’s Canadian-built robotic arm June 28, just prior to the cargo freighter’ departure. Credit: NASA

Northrop Grumman’s next resupply flight to the International Space Station has been delayed from mid-August to mid-October by supply chain issues, a company spokesperson said Tuesday.

The 18th flight of a Northrop Grumman Cygnus spacecraft to the space station, known as NG-18, will launch on an Antares rocket from the Mid-Atlantic Regional Spaceport in Virginia. NASA’s Commercial Resupply Services contract with Northrop Grumman extends through the NG-25 mission scheduled for 2026.

The NG-18 mission was scheduled to launch in mid-August on a mission to deliver several tons of supplies and experiments to the space station.

The Cygnus spacecraft’s pressurized cargo module, built by Thales Alenia Space in Italy, has been delivered to the launch site at Wallops Island on Virginia’s Eastern Shore, and processing of the Antares launch vehicle for the NG-18 mission continues at the launch site, Dinman said.

The Cygnus service module is undergoing final testing at Northrop Grumman’s satellite manufacturing facility in Dulles, Virginia, according to Dinman.

NASA officials acknowledged the delay last week, but deferred to Northrop Grumman when asked about details on the reason for the schedule slip.

But Northrop Grumman needs additional hardware deliveries from Russia for Antares launches beyond NG-19 next year.

“We have what we need for the next two launches,” said Kathy Warden, Northrop Grumman’s president and CEO, in an April earnings call. “So there isn’t immediate disruption, and we have a plan in place that we could use other sources if needed, beyond those two launches.”

Warden did not discuss the backup options available to Northrop Grumman, but the company has launched Cygnus cargo missions on United Launch Alliance’s Atlas 5 rocket in the past.

“It’s our preference to keep the relationship intact between Russia and the U.S. around the space station, and that’s what these rocket motors are used for — to take cargo to the International Space Station,” Warden said. “But we are working closely with NASA to make sure we’re following the U.S. government lead in that case.”

The Biden administration has limited imports of Russian products to the United States, but the order’s impact on a critical civilian space program — like the resupply of the space station — is unclear. Dmitry Rogozin, the former head of Russia’s space agency, said in March that Russia was halting the export of rocket engines to the United States.

Rogozin was dismissed as the chief of Russia’s space agency last week.