At the edge of known space are quasars. They are powerful cosmic engines capable of creating intense beams of light across billions of light years. And they are powered by supermassive black holes (SMBHs). Most galaxies have a SMBH, including our own galaxy, but for quasars to be so powerful their SMBHs must have become very large very quickly. We’re still learning just how they formed. We’ve long thought their formation involved a special set of circumstances, but a new study shows that early quasars could have formed purely from cold dark gas.

The biggest mystery about quasars is their youth and power. In the past couple decades, astronomers have discovered quasars so distant that they must have have been active less than a billion years after the big bang. Their intense power indicated that they must be billions of solar masses in size. How could such massive objects form so quickly in the early universe?

The most common theory has been that they were formed from the remnants of supermassive stars. The early universe was much more dense that it is today, and under just the right conditions some early stars had masses of more than 100,000 Suns. These stars lived brief lives before collapsing to become an intermediate mass black hole. These black holes then became the seeds of early quasars. The problem with this idea is that supermassive stars would have been rare. Perhaps to rare to account for all the distant quasars we see today. 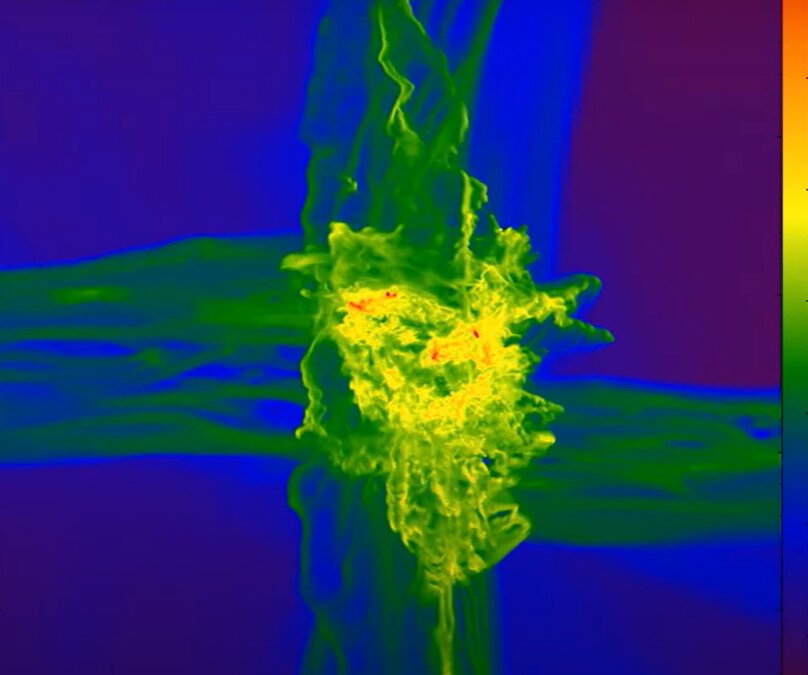 Computer simulation showing the formation of a quasar. Credit: University of Portsmouth

This new study looked at computer simulations of hydrogen and helium gas at the dawn of the cosmos, particularly the turbulent regions that formed through the complex dance of gravity and cosmic expansion. In the early universe, gravity and expansion created the seeds of galaxies by creating clusters of gas connected by filaments. Gas flowed along the filaments as the clusters grew. The team found that the turbulence of these flows delayed star formation, until clouds of gas were dense enough to collapse under their own weight, triggering the formation of a massive black hole. Through this process, a billion solar mass black hole could form over the span of just a few hundred million years. What’s more, this process was fairly common, and didn’t require the special conditions of other SMBH models.