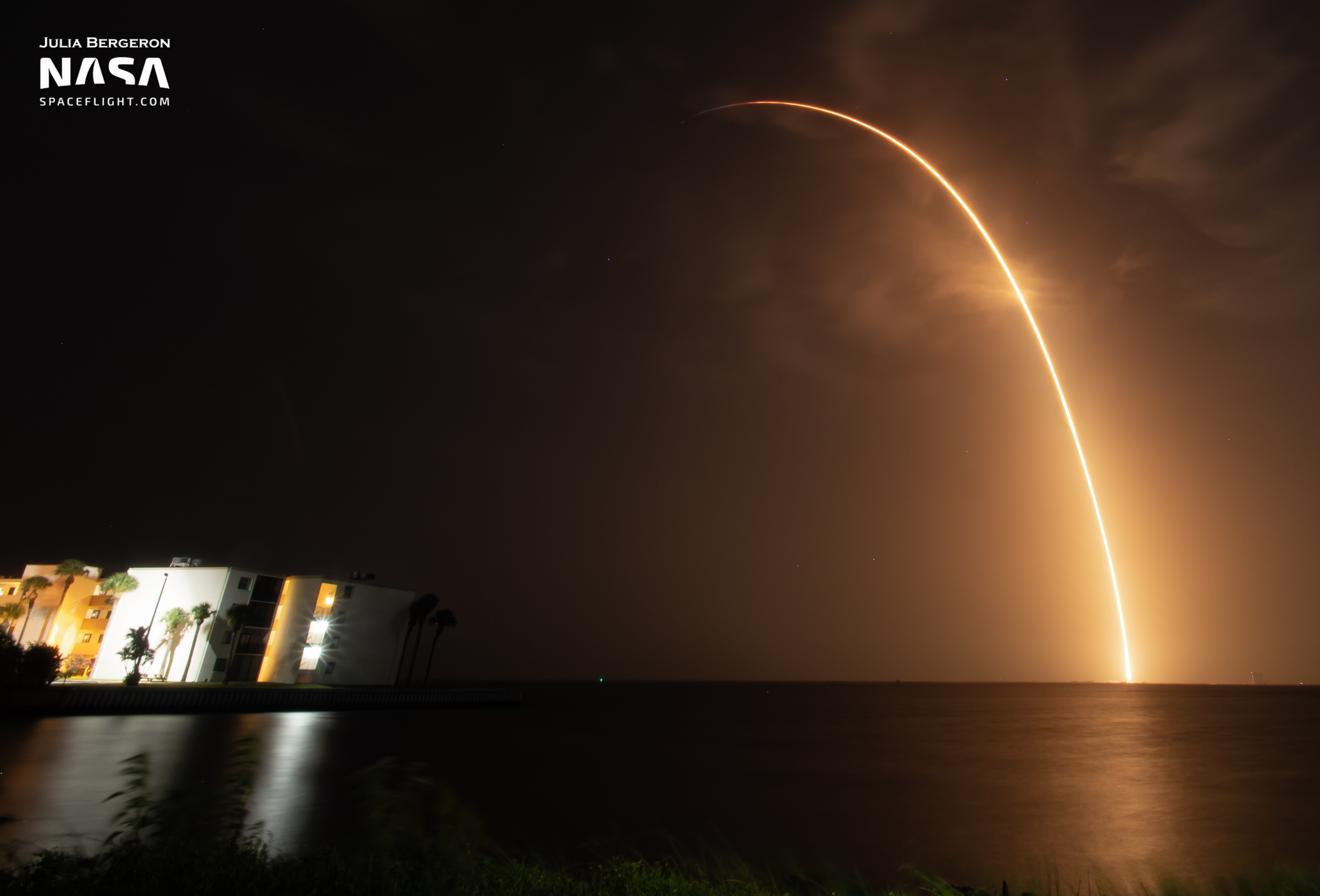 SpaceX’s Falcon 9 rocket launched from pad 39A at the Kennedy Space Center on Tuesday, carrying 52 Starlink satellites to Low Earth Orbit (LEO). These satellites will contribute to filling up the fourth shell of the Starlink constellation, which is now available in 36 countries to provide internet access to people around the globe.

On August 3, 2022, SpaceX received special temporary permission to allow communications between Starlink satellites and U.S. ground stations at latitudes above 53 degrees using elevations down to 10 degrees, whereas the previous elevations were at or below 25 degrees. This is the first launch of Starlink satellites since the implementation of this special permission.

Starlink Group 4-26 were launched using first stage B1073, which had flown on two previous missions, both of which were in the past three months. First, the stage launched Starlink Group 4-15 in May 2022 followed by SES-22 in June 2022, with this most recent flight occurring 41 days ago. It is unclear whether or not either of the fairing halves had flown previously.

This was SpaceX’s 178th mission and the company’s 35th in 2022. Once this batch of Starlink satellites were deployed, the total number of launched Starlinks rose to 2,920.

The launch sequence began at T-38 minutes when the go/no-go poll was conducted, which took into account the weather conditions, vehicle and payload health, and the status of the keep-out zones. For Starlink 4-26, the forecasted probability of acceptable weather for an on-time launch was 70% and proved to be no issue at lift-off.

At T-35 minutes, propellant began being loaded into the vehicle, starting with sub-cooled RP-1 kerosene to both stages, which were fully loaded by T-20 minutes, and super chilled liquid oxygen (LOX) to the first stage. At the T-20 minute point, a large vent was seen from the Transport Erector (T/E) as it purged its lines to prepare for the next phase of fueling.

Four minutes later, at T-16 minutes, LOX began being loaded into the second stage. This commodity is loaded second due to the different temperatures to minimize boiloff. Both RP-1 and LOX were then topped off until T-90 seconds.

At T-7 minutes, engine chill on the first stage began in order to minimize the thermal shock to the Merlin 1D engines as the super chilled LOX flows through them at ignition. Then, at T-60 seconds, the vehicle entered startup, meaning the flight computer took over the countdown, and the fuel tanks were brought to flight pressure. Finally, at T-3 seconds, the flight computer sent the command for ignition of the nine Merlin 1D engines for liftoff at T-0.

The Merlin 1D engines remained lit for just over 150 seconds before Main Engine Cutoff (MECO) and stage separation occurred. Following stage separation, a series of events happened in quick succession. First, the second stage lit its single Merlin 1D Vacuum (MVac) engine to then perform a six-minute and four-second burn in order to insert the Starlink satellites into their initial parking orbit.

Departure! A Shortfall of Gravitas droneship is heading ~630 km downrange for the Starlink 4-26 mission.https://t.co/cPTKbURbfR pic.twitter.com/meVeZ41kHe

At the same time, fairing separation occurred and the fairing halves both re-enter the atmosphere to splashdown downrange and be recovered by SpaceX recovery vessel Doug to hopefully be refurbished and reused.

Also following stage separation, the first stage booster deployed its grid fins and performed a series of thruster maneuvers in order to properly orient itself for re-entry. Once the vehicle’s clock reached six minutes following launch, it reignited one engine, followed by two more, then shut down two after a few seconds, then shut down the final engine about 20 seconds after its reignition, completing the entry burn.

Shortly after eight minutes following launch, the booster reignited its center engine for a gentle landing on SpaceX’s Autonomous Spaceport Drone Ship (ASDS) A Shortfall of Gravitas (ASOG), stationed off the coast of North Carolina.

Falcon 9 B1073 lands on SpaceX drone ship A Shortfall of Gravitas (ASOG). pic.twitter.com/dLDXyAnsCq

Once the second stage reached the correct parking orbit, Second Engine Cutoff 1 (SECO-1) occurred and the stage entered a 45-minute and 14-second coast phase, after which the MVac reignited for a one-second burn to ensure the satellites were positioned correctly before deployment. Finally, roughly one hour after launching, the four tension rods that hold the satellites in place were released, allowing the satellites to slowly drift away from the second stage and prepare to maneuver to their final positions over the next several months.

The post Starlink Group 4-26 launches on Falcon 9 from LC-39A appeared first on newsastronomy.com.