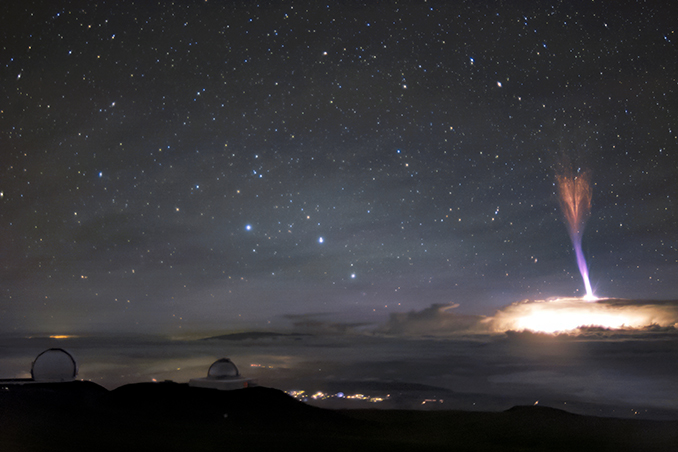 Two rare phenomena associated with thunderstorms are captured in this expansive vista seen from 4,200 metres above sea level at the Gemini North telescope, overlooking the other observatories atop Mauna Kea in Hawaii. To the right of the photograph we see a huge thunderstorm erupting in light, and a blast of light erupting skywards from the cloud deck. This blast of light contains two different phenomena: a ‘blue jet’ and a ‘red sprite’.

Both are associated with electrical discharges directed above, rather than below, thunderstorms, and so elusive are they that both phenomena were only imaged for the first time in 1989. Blue jets form when an electrical discharge travels from the positively charged region at the top of the thunderclouds to the negatively charged zone above those clouds, with the blue colour the result of nitrogen atoms in the atmosphere being ionised.

Although it looks like the red sprite above it is connected to the blue jet, they are separate, albeit related, entities. The sprite is at an altitude of about 90 kilometres, and video footage shot at extremely high frame rates (of about 10,000 frames per second) show that sprites are composed of a multitude of balls of ionised plasma dropping back to Earth at a tenth of the speed of light.

Although sprites and jets had been seen sporadically above thunderstorms by eyewitnesses prior to 1989, their fleeting nature meant that imaging them was difficult. To do so successfully, the camera needs a clear view of a thunderstorm from a distance of 150 to 500 kilometres, and to be under an exceptionally dark sky, making Mauna Kea the perfect location from which to image these elusive light displays.