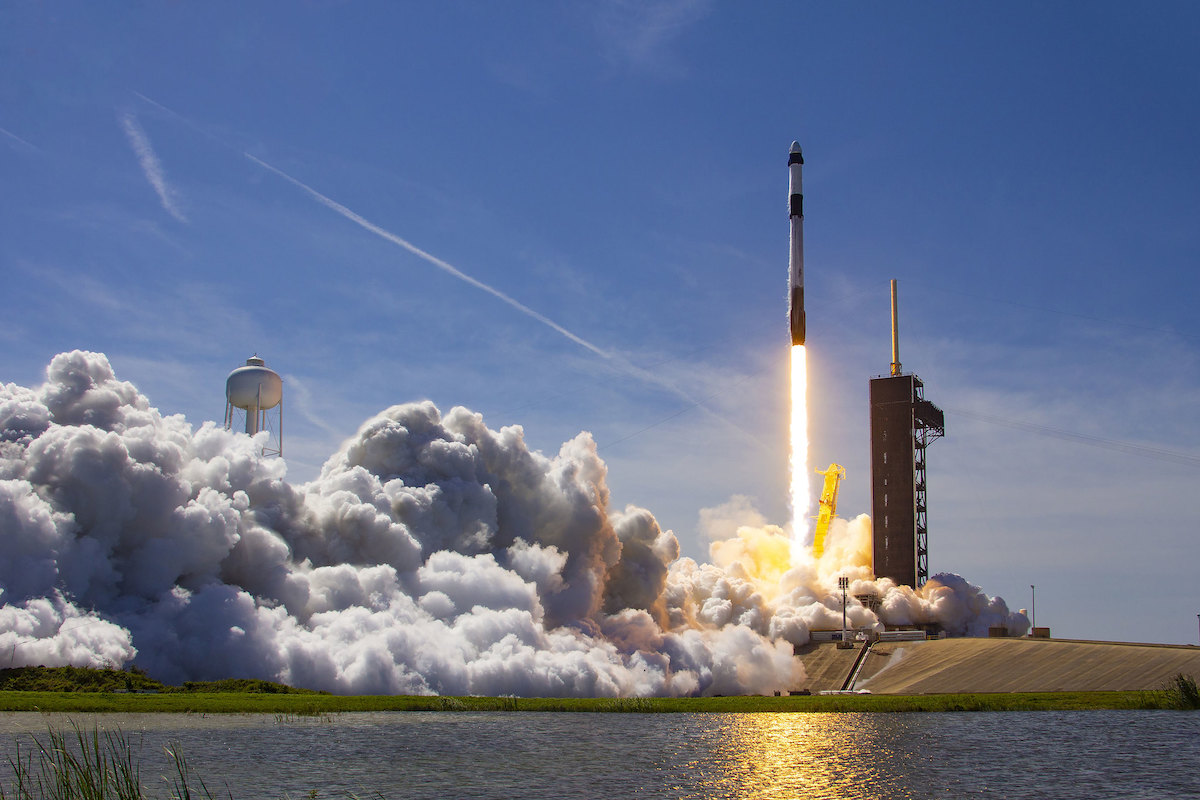 SpaceX and NASA have delayed the launch of the next U.S. crew flight to the International Space Station from early September to no earlier than Sept. 29, allowing time for ground teams to replace an interstage on the mission’s new Falcon 9 booster after it was damaged during transport.

The Falcon 9 booster stage, riding horizontally on a truck and trailer, struck a bridge during the trip from SpaceX’s factory in Hawthorne, California, to the company’s test facility in McGregor, Texas, where the rocket will be test-fired before continuing on to the Kennedy Space Center for launch preparations.

The launch of the Crew-5 mission to the space station was scheduled for no earlier than Sept. 1. NASA announced July 21 that the launch of SpaceX’s fifth long-duration crew rotation flight to the station is now scheduled for Sept. 29, at the earliest.

“SpaceX is removing and replacing the rocket’s interstage and some onboard instrumentation after the hardware was damaged during transport from SpaceX’s production factory in Hawthorne, California, to the company’s McGregor test facility in Texas for stage testing,” NASA said in a statement.

The interstage is the black section near the top of the reusable 15-story-tall first stage. During the first phase of launch, the upper stage’s large Merlin engine nozzle sits inside the interstage, which also holds the rocket’s grid fins used for control and stability during the rocket’s re-entry and landing.

NASA said its engineers reviewed SpaceX load, shock, and structural analyses of the booster, along with detailed and X-ray inspections. The work verified the damage was isolated to the interstage, according to NASA.

“After all replacement hardware is installed, the booster will undergo stage testing and be further assessed prior to acceptance and certification for flight,” NASA said.

NASA astronaut Nicole Mann will command the planned six-month Crew-5 mission. She will be joined by NASA astronaut Josh Cassada, Japanese astronaut Koichi Wakata, and Russian cosmonaut Anna Kikina, who will become the first Russian to fly on a SpaceX Crew Dragon spacecraft.

Kikina’s inclusion on the crew was confirmed July 15 after NASA and Roscosmos — Russia’s space agency — finalized a barter “seat swap” agreement to allow Russian cosmonauts to fly to the station on U.S. crew missions and U.S. astronauts to launch and land on Russian Soyuz spaceships. The no-funds-exchanged agreement will help ensure the station always has at least one U.S. and one Russian crew member on-board, in the event of a failure or grounding of an American or Russian crew mission.

The delay from early September to late September moves the Crew-5 launch after the launch and docking of a Russian Soyuz crew vehicle Sept. 21. The Soyuz mission will fly two Russian cosmonauts and NASA flight engineer Francisco Rubio to the station. They will replace an outgoing Russian crew who will return to Earth around Sept. 29 on their Soyuz spacecraft. 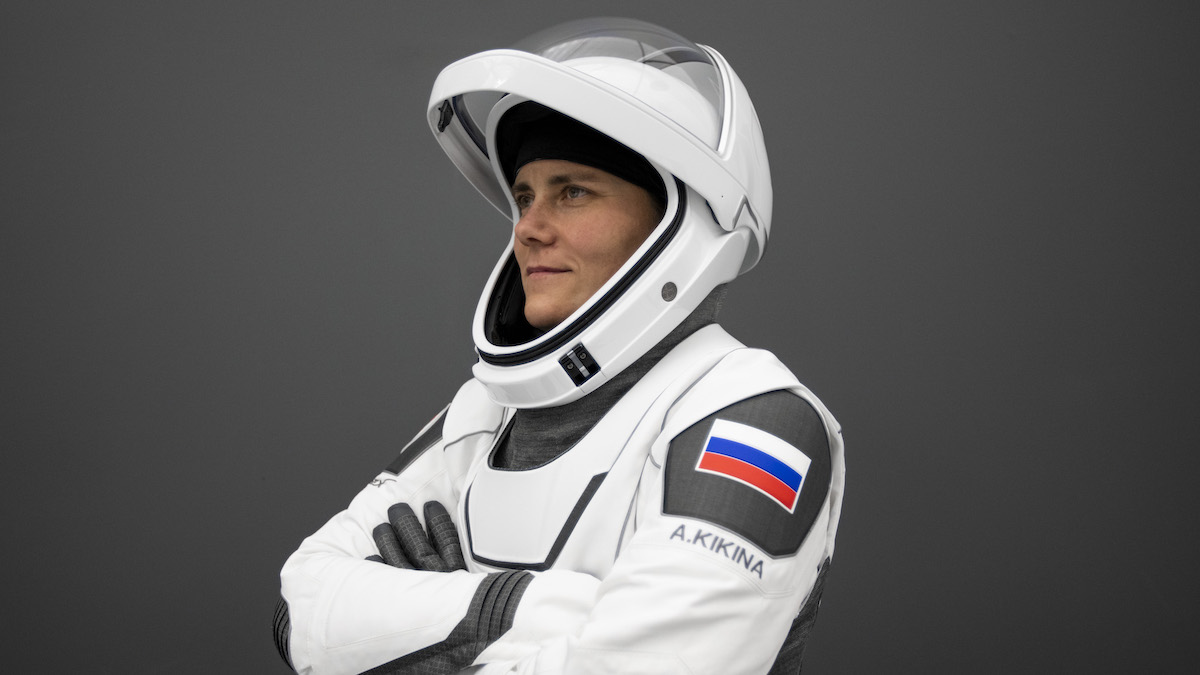 Russian cosmonaut Anna Kikina poses in a SpaceX pressure suit during training for a flight on a Crew Dragon spacecraft. Credit: SpaceX

Mann and her crewmates will fly on SpaceX’s Dragon Endurance capsule, which splashed down May 6 to wrap up NASA’s Crew-3 mission, its first mission to the space station. SpaceX is refurbishing the spacecraft at a facility at Cape Canaveral Space Force Station for its second launch on the Crew-5 mission.

“As part of the refurbishment process, teams will install new components such as the heat shield, parachutes, and pod panels,” NASA said. “This also will be the first time all four forward bulkhead Draco engines, which orient and provide altitude adjustment for the spacecraft during flight, are reused on a NASA commercial crew mission.

“SpaceX recently completed Dragon’s propulsion system checkouts and will soon mate the heat shield to the spacecraft,” NASA said. “Once refurbishment is complete, Dragon will be stacked to its trunk ahead of transporting the vehicle to SpaceX’s hangar at Launch Complex 39A at NASA’s Kennedy Space Center in Florida.”

NASA said in May that the Crew-5 mission will fly with a different heat shield structure than originally planned after a composite substrate failed in acceptance testing due to a “manufacturing defect.”

The heat shield’s 13-foot-diameter (4-meter) composite structure — located at the bottom, blunt end of the Dragon capsule — is detachable and interchangeable between the reusable spacecraft in SpaceX’s Dragon fleet. SpaceX installs thermal protection tiles on the composite structure to protect the spacecraft from the searing heat of atmospheric re-entry at the end of each mission.

Once processing is complete at the Dragon refurbishment facility at Cape Canaveral, the Dragon Endurance spacecraft will be mated with its Falcon 9 rocket at the SpaceX hangar. Then the fully-assembled launcher will roll to pad 39A for a test-firing and final flight preparations.

Like the Soyuz crew rotation earlier in September, SpaceX and NASA’s Crew-5 mission will replace the four astronauts who have been at the space station since April on the Crew-4 mission. The Crew-4 astronauts will ride SpaceX’s Dragon Freedom capsule back to Earth for a splashdown off the coast of Florida in early October, while Crew-5 remains in orbit at the space station until spring.

Boeing, NASA’s other commercial crew provider, aims to launch its first crew test flight to the space station late this year or in early 2023. Boeing’s Starliner crew capsule completed a successful unpiloted test flight to the station in May, two-and-a-half years after a first attempt ended prematurely due to software problems.

NASA has contracted with Boeing for six operational crew rotation flights, which will alternate with SpaceX Crew Dragon missions once the Starliner is certified for astronauts.