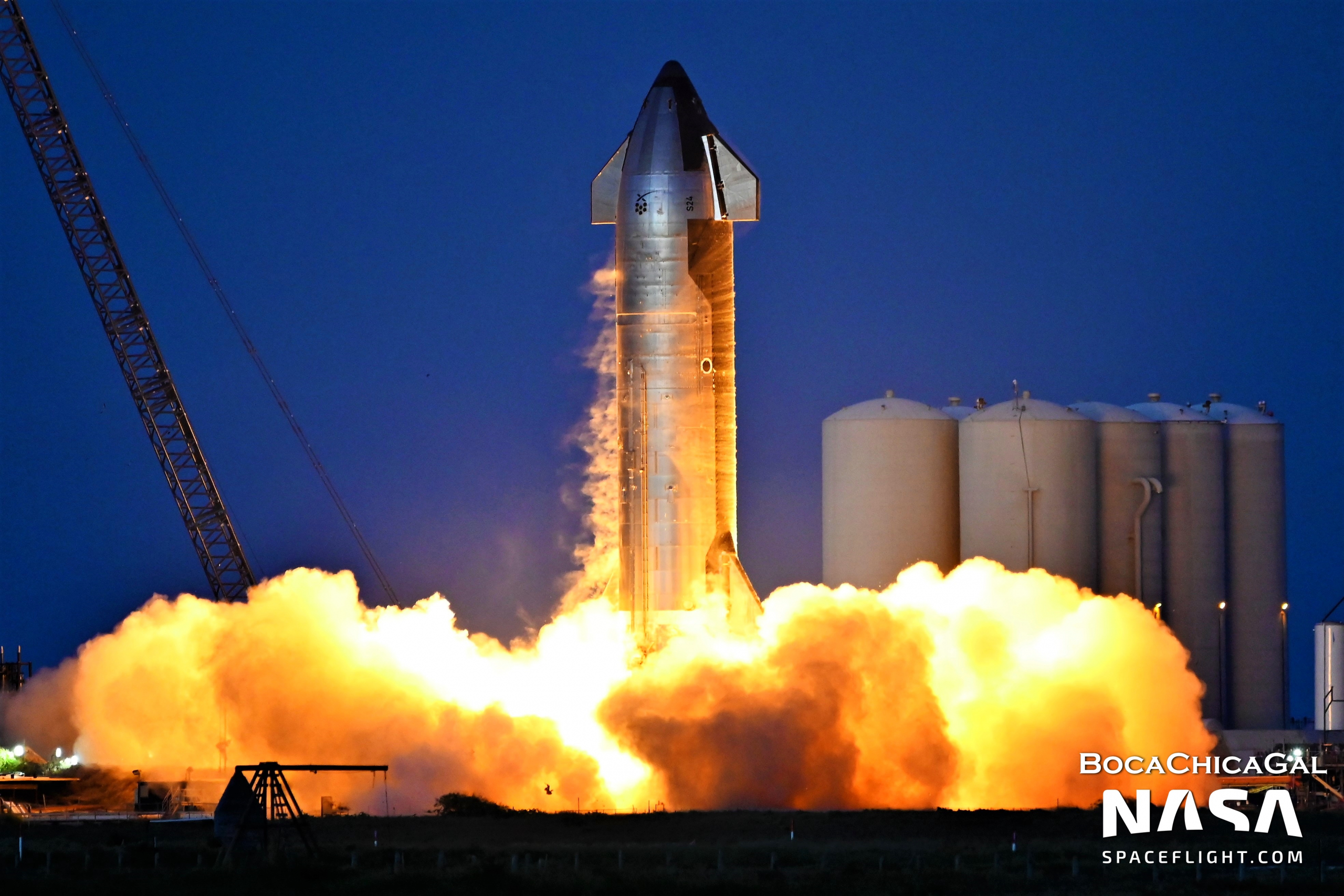 In recent weeks, SpaceX has not only moved back into Starship testing with Ship 24, but has also performed multiple engine tests with Booster 7 after the explosion below it during a failed spin prime test, and repairs after that in the mega bay. It is now time to look at parts of the countdown that have stayed the same, and the new things about the Starship and Super Heavy countdown operations compared to what was observed last November. These changes will be evident in the next stage of testing, which might begin as early as this week.

For Starship, there have been two different flows seen in recent testing. The most common one was comparable to the one seen in early vehicles, where the re-condenser would start up between 42 and 47 minutes before T-0.

This marked the beginning of cooling the liquid methane and liquid oxygen for testing. This timing is comparable to that which the vehicles for the high-altitude hop campaigns used in their countdown sequence for static fires.

Later in the countdown, condensation was seen on the ground lines approaching the vehicle. This signaled propellant loading, as these lines are used to load the vehicle on its test stand. What is important about this indicator is that it can be hard to spot compared to others, as it can be hidden in other condensation coming from the tank farm if the wind blows from the wrong direction or the heat turbulence is too strong.

One of the best indicators is the engine chill vent. While in previous vehicles this was indicated by three big vents coming from the vehicle, it is now two vents that are on the bare steel side of the vehicle, right beneath the flaps. This indicator used to be a consistent 13-minute countdown to T-0, but it is not anymore.

The range of engine chill vent timing was between 12 and 17 minutes to T-0 in recent testing. This vent indicates that the engine is being chilled for ignition, as SpaceX needs to prepare the engine for the sudden flow of cold methane and liquid oxygen before ignition. 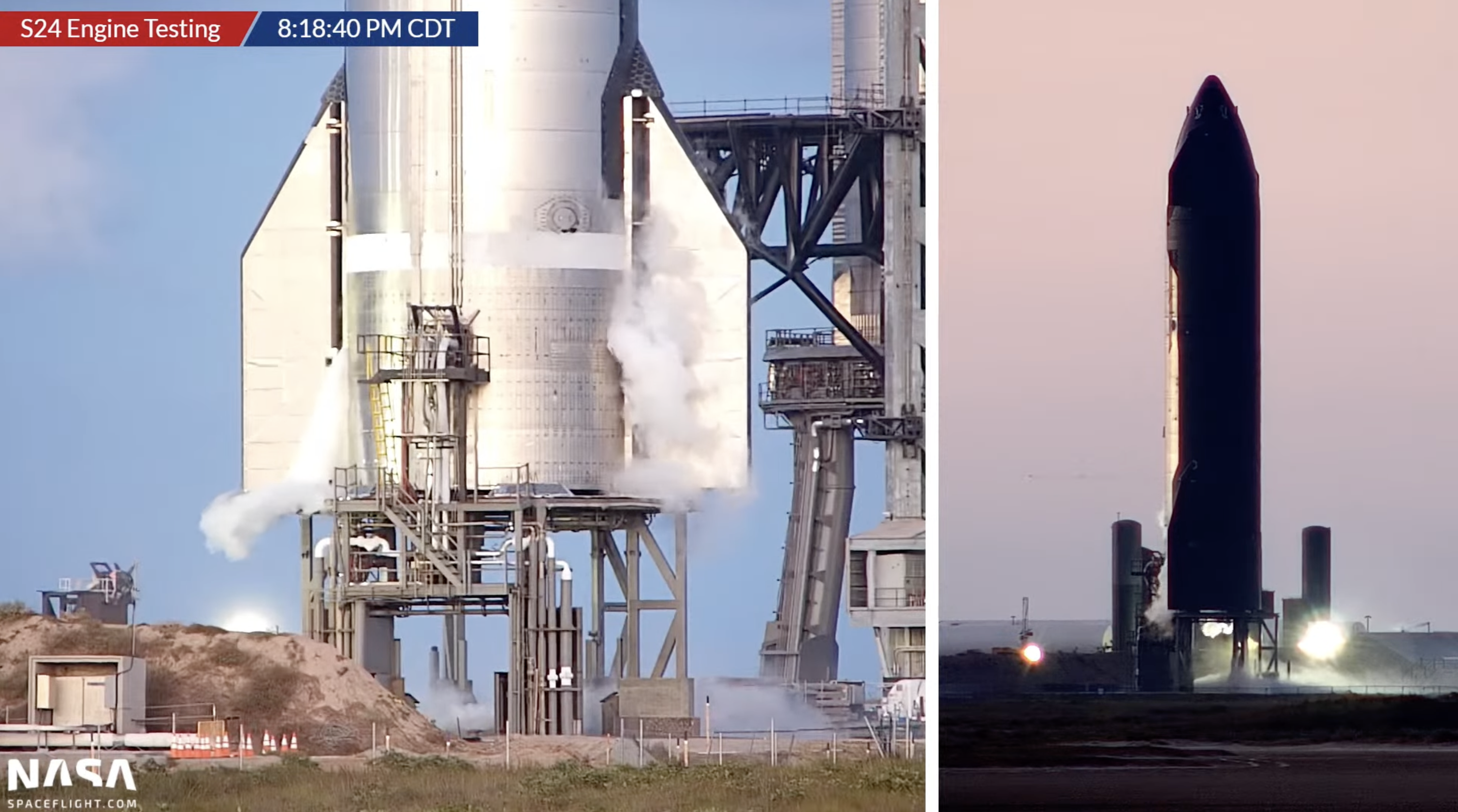 The deluge system below Ship 24 is active seconds before a static fire. (Credit: NASASpaceflight)

For the final few seconds, the deluge system was observed as it was activated to protect the vehicle and the concrete pad underneath from damage during the static fire. A deluge system brings water to the area of the firing to absorb some of the energy released from the engines. This indicator can be even harder to spot, compared to propellant loading, depending on haze, camera angle, and wind.

For ship testing, there was also a second countdown observed, which was indicated by the LOX side of the tank farm starting up first before the methane re-condenser was active. This countdown showed a higher LOX load, indicated by a taller frost ring on the outside of the vehicle, and a longer countdown sequence overall. It is not clear which flow was used for which test configuration.

The booster gave a good view into its countdown as well, but with some large uncertainty compared to the latest Starship countdowns, which are very stable.

This is comparable to early Starship countdowns and might be a situation where SpaceX is still learning and understanding how to move the vehicle through its countdown procedure. 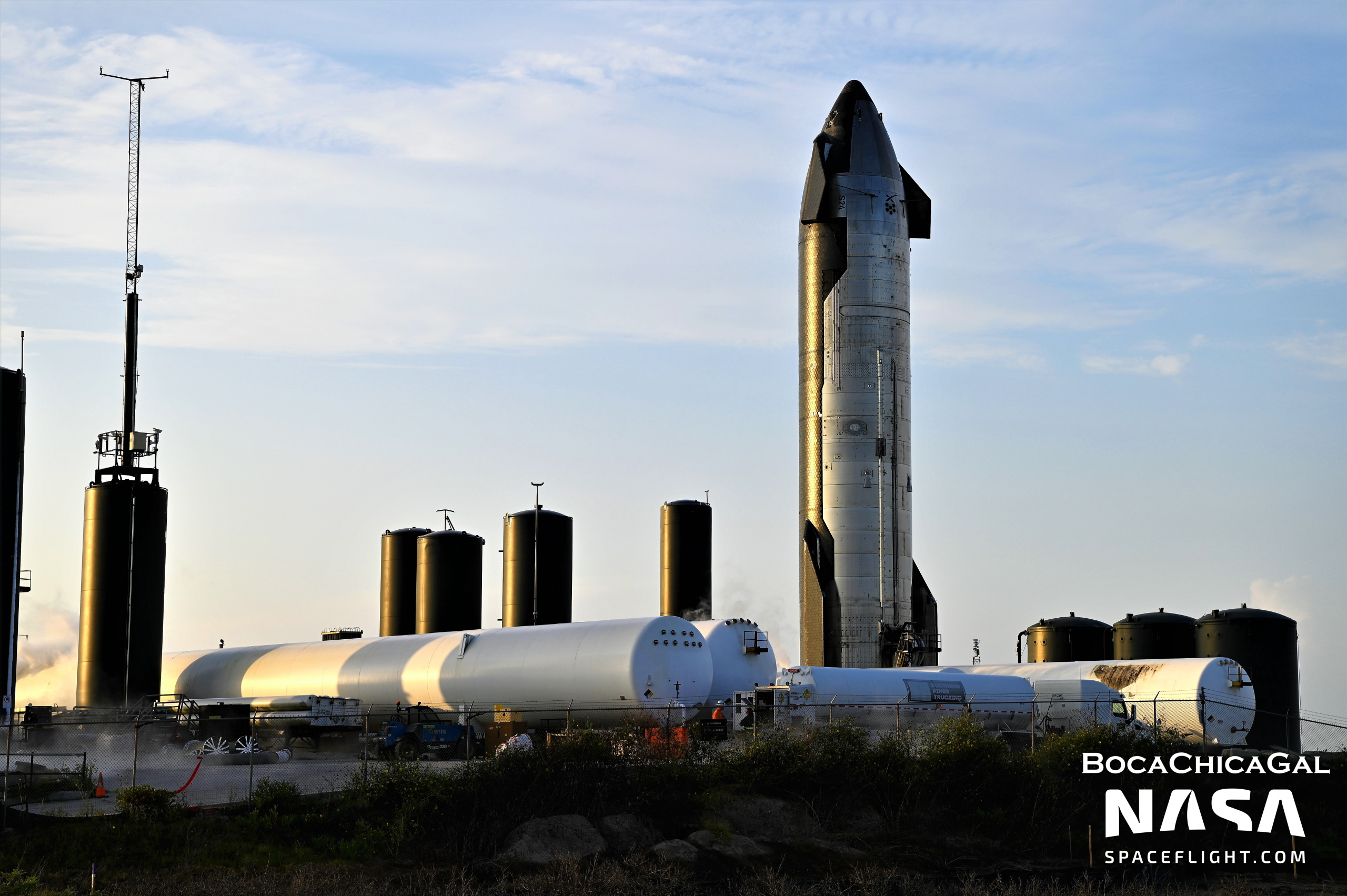 As the first indicator of Booster activity, a new ground line is seen producing condensation. This ground line is located on the beach side of the Orbital Pad. So far, the range of time is very unpredictable, and it might be comparable to the suborbital pad’s “grass vent” which can start up hours before T-0. This might be related to the Orbital Tank Farm pipes getting cooled and cleared for the flow of propellant through them.

The first major timing indicator of countdown operations is a small vent pipe that is located at the table of the Orbital Launch Pad. This would start to vent between 90 and 150 minutes before T-0 and is at least a first indication about a countdown happening with the booster.

With the later test being shorter than the first ones, this could indicate SpaceX getting faster with the process as the understanding of how the booster systems behave improves. This would also be comparable to early Starship countdowns, which tended to be longer. 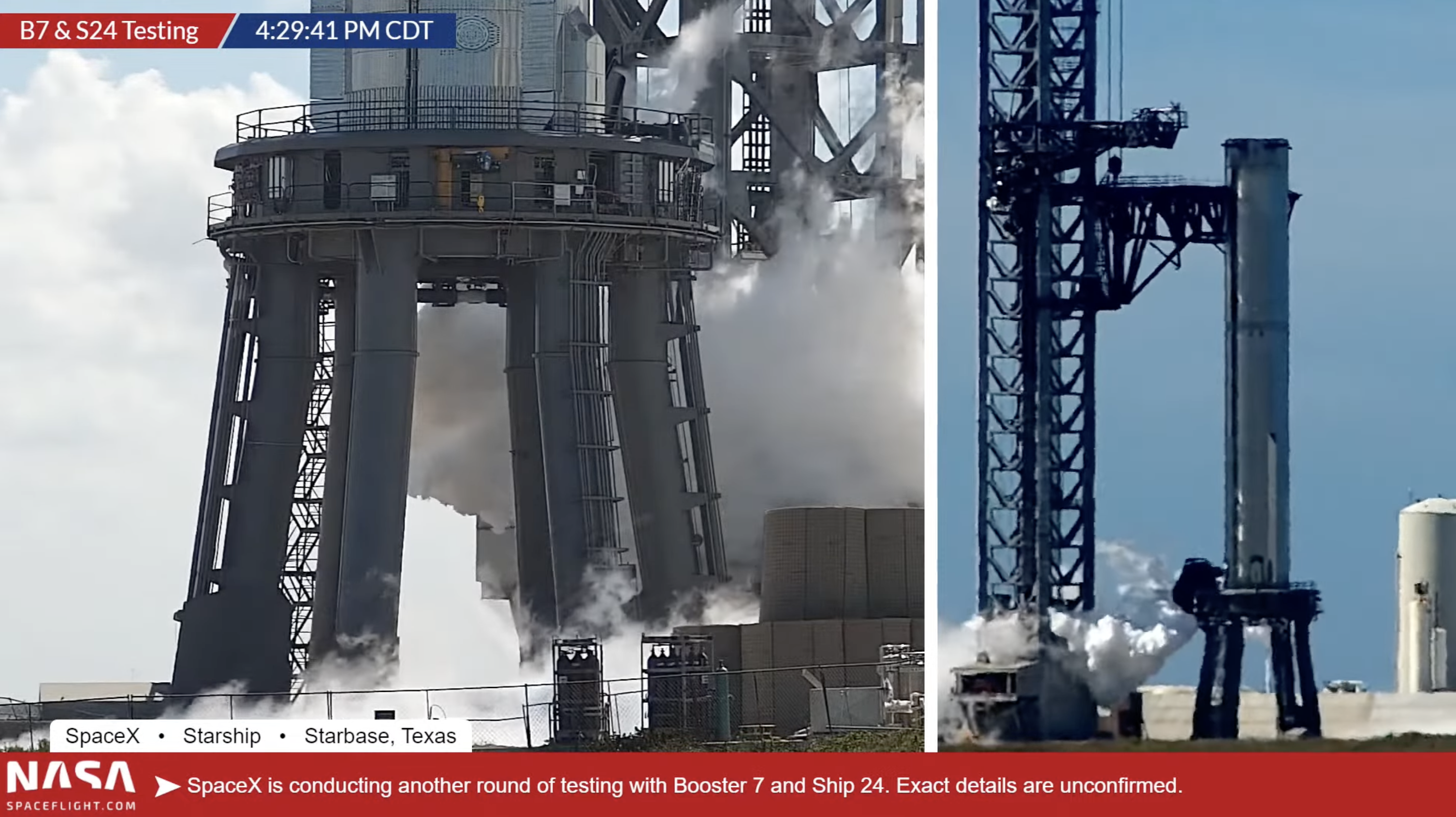 The pad vent ahead of a Booster 7 static fire. (Credit: NASASpaceflight)

After a good amount of time, usually about 45-60 minutes before T-0, the vent would stop. It is suspected that the vent is a line purge that will go on until the beginning of propellant loading, so the vent stopping indicates propellant loading onto the vehicle. This is also indicated by condensation coming from the bottom of the vehicle shortly after, which means the thrust section is getting frosty as liquid propellants are getting filled into the lower tank.

On the outside of the pad is the next indicator that can be spotted. Outside are the engine chill vents, comparable to the engine chill double vent on the ship. With most of the plumbing and mechanism for the outer engines being external, it makes sense that the chill and vent pipes are also not integrated into the vehicle, but rather into “stage zero,” as that reduces the weight of the flight hardware.

These turn up in a comparable window to ship, about 15 minutes before T-0. After that, the siren in Boca Chica Village was turned on by the sheriff to indicate a test, and ignition occurred. A special deluge mechanism has not been spotted for the booster countdown yet. 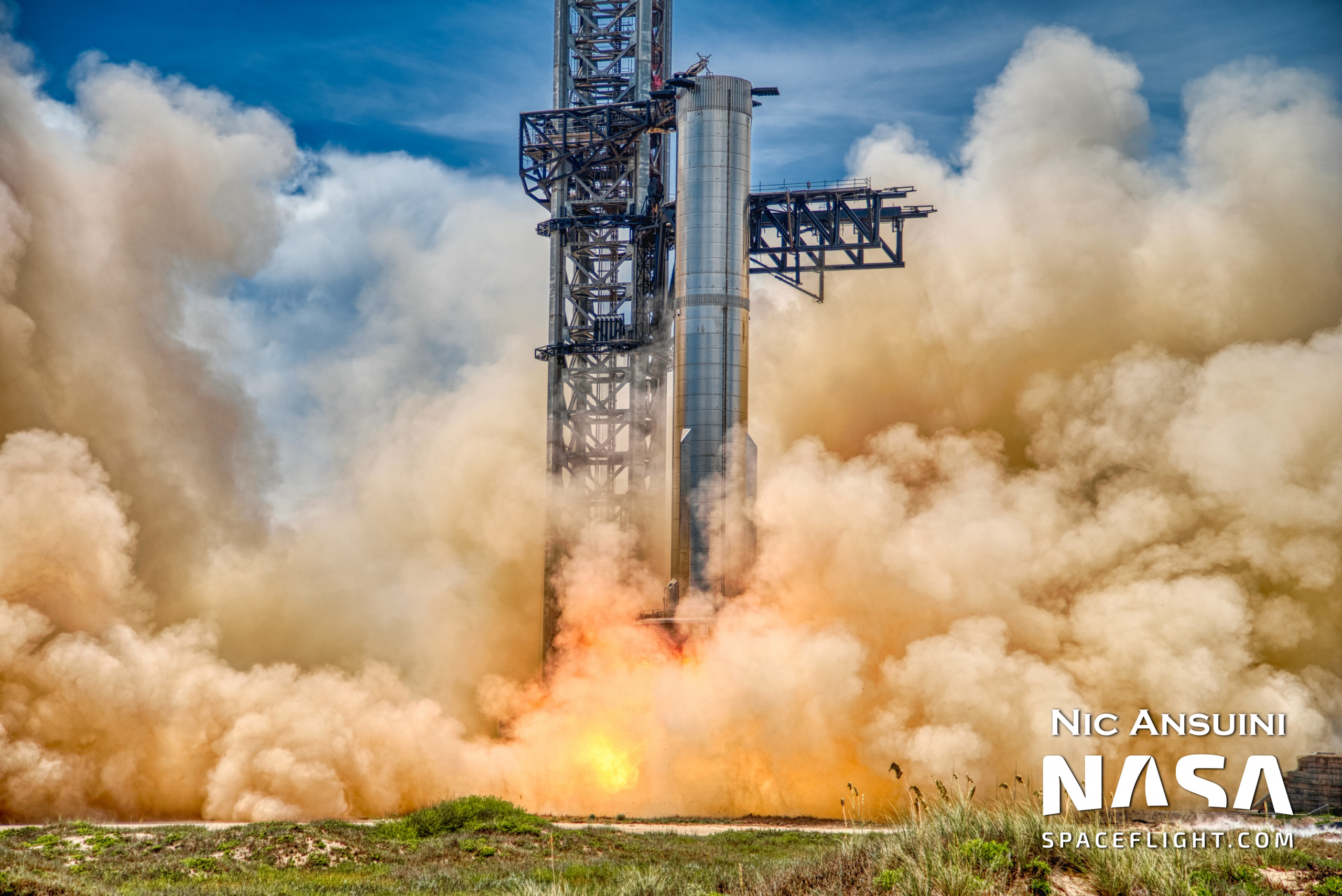 It also is possible that another methane flare stack will be seen at the orbital launch site soon, as lines from the engines that should emit propellants are being redirected to a berm secured location to the side of the orbital launch site. This could indicate SpaceX moving away from a primary usage of a re-condenser during countdowns, and preparing to burn off methane again. Maybe this is also a reaction to the failed spin prime test, as a way to reduce methane that builds up under the vehicle. Instead of venting it out there, it might be redirected to the new area where a new flare could be built.