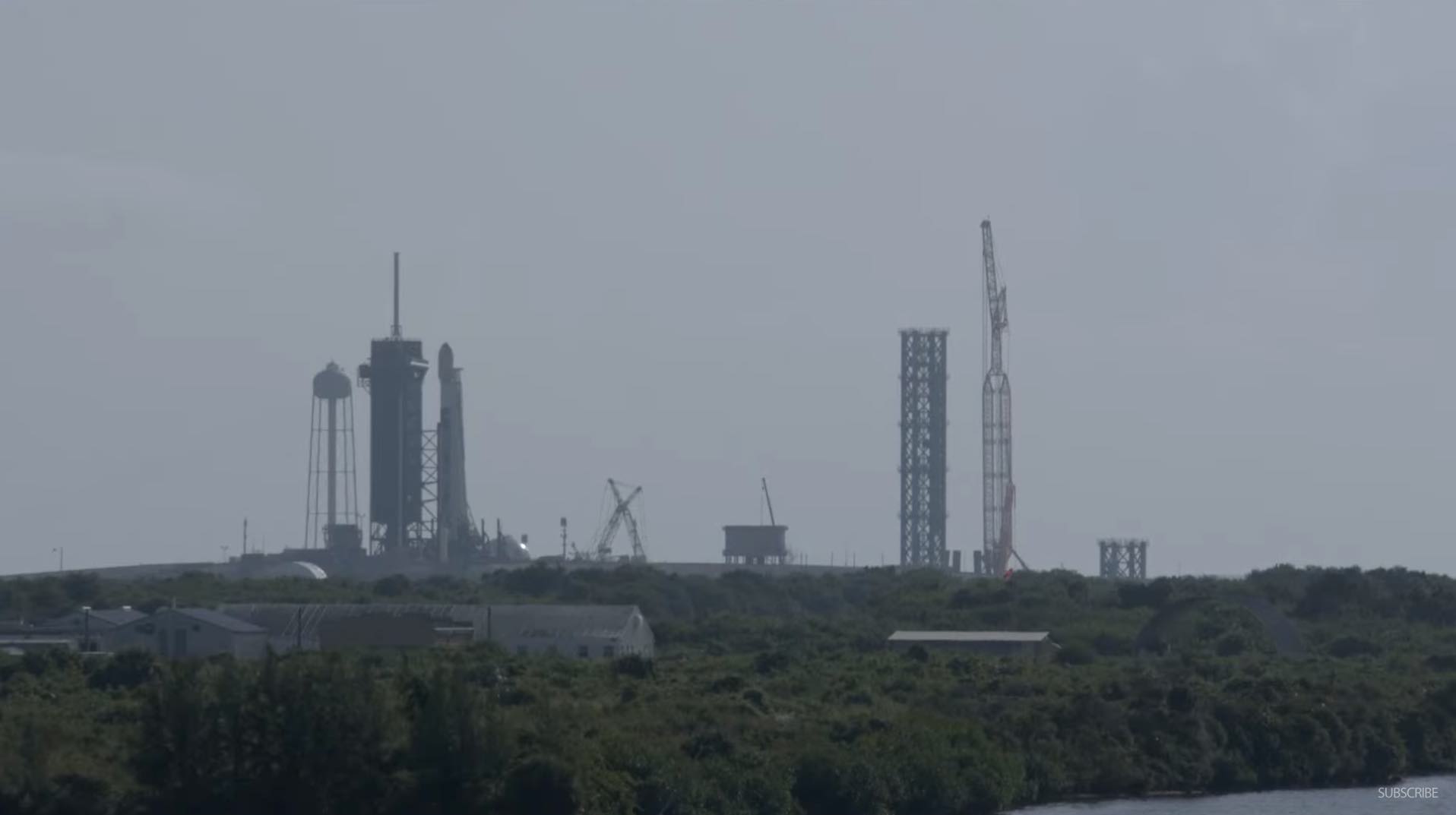 A view of Launch Complex 39A on Tuesday morning, where SpaceX rolled a Falcon 9 rocket to the pad for liftoff with another batch of 52 Starlink internet satellites. On the right, work continues on the launch pad for SpaceX’s next-generation Starship program. Credit: SpaceX

SpaceX continues to launch Falcon 9 rockets from Launch Complex 39A in Florida as construction work advances on the nearby tower for the company’s next-generation Starship rocket. Overnight Tuesday, SpaceX rolled another Falcon 9 to pad 39A for liftoff with the next batch of Starlink internet satellites, just hours after another section of the Starship gantry tower arrived at the pad.

The sixth of nine sections for the Starship launch tower moved to pad 39A at the Kennedy Space Center on a self-propelled transporter Monday night. A large crane at pad 39A was expected to raise the five-story-tall segment on top of five sections already stacked at the Starship orbital launch site, located about 1,000 feet (300 meters) east of the existing Falcon 9 launch area.

SpaceX is moving ahead with work on the Starship pad in Florida, the second site for the huge new reusable rocket after a similar facility was built in South Texas. The tower will stand more than 450 feet tall when complete.

Meanwhile, SpaceX’s next Falcon 9 rocket mission is set for launch at 6:57:40 p.m. EDT (2257:40 GMT) Tuesday from pad 39A. The 229-foot-tall (70-meter) rocket will head northeast from Kennedy and accelerate into orbit over the Atlantic Ocean to inject 52 Starlink satellites into orbit.

Ground teams at pad 39A rolled the Falcon 9 from its hangar to the launch position early Tuesday, then raised the rocket vertical over the flame trench around 7:30 a.m. EDT (1130 GMT). Crews planned to prep the rocket for the start of the automated countdown sequence 35 minutes before liftoff time.

SpaceX will load about a million pounds of kerosene and liquid oxygen propellants into the Falcon 9, setting the stage for ignition of its nine Merlin 1D engines about three seconds before liftoff.

After a computer-run health check of the engine performance, hold-down clamps will open to release the Falcon 9 to begin its vertical climb off of pad 39A. The Falcon 9’s guidance computer will vector engine thrust to head downrange, lining up with an orbital plane in the Starlink fleet inclined at an angle of 53.2 degrees to the equator.

The first stage will shut down its nine engines at separate from the Falcon 9’s upper stage about two-and-a-half minutes after liftoff. The booster will use cold gas thrusters and extendable titanium grid fins to control its re-entry back into the atmosphere.

A restart of three of the Merlin main engines will slow the rocket down as it descends through thicker air, then a final landing burn with the center engine will allow thee booster to brake for touchdown on a drone ship parked in the Atlantic Ocean a few hundred miles east of Charleston, South Carolina.

Landing of the first stage is scheduled for T+plus 8 minutes, 44 seconds, to complete the booster’s third flight to space. The first stage, designated B1073 in SpaceX’s inventory, debuted in May and notched a second flight in June.

The Falcon 9’s single-use upper stage will continue into orbit with a six-minute burn of its single Merlin engine, which will cut off around the same time as the first stage booster lands on SpaceX’s drone ship. The Falcon 9’s reusable payload fairing will jettison during the second stage burn. A recovery ship is also on station in the Atlantic to retrieve the two halves of the nose cone after they splash down under parachutes.

The upper stage is programmed to deploy the 52 Starlink satellites at T+plus 15 minutes, 24 seconds. The rocket will target an orbit between 144 miles and 208 miles (232-by-335 kilometers). The Starlink satellites will separate from the Falcon 9’s upper stage after it releases four retention rods that hold the spacecraft to the rocket during launch.

SpaceX has launched 2,957 Starlink satellites going into Tuesday’s mission, known as Starlink 4-26, including prototypes and earlier spacecraft designs no longer in service. The 52 satellites to be added to the constellation on the Starlink 4-26 mission will push the total number of Starlink spacecraft launch to more than 3,000.

A tabulation by Jonathan McDowell, an astrophysicist and expert tracker of spaceflight activities, shows there are 2,662 Starlink satellites functional in orbit, as of Tuesday. The network has a 2,268 satellites operational providing consumer broadband services, and the rest are maneuvering into the final orbital positions, according to McDowell.