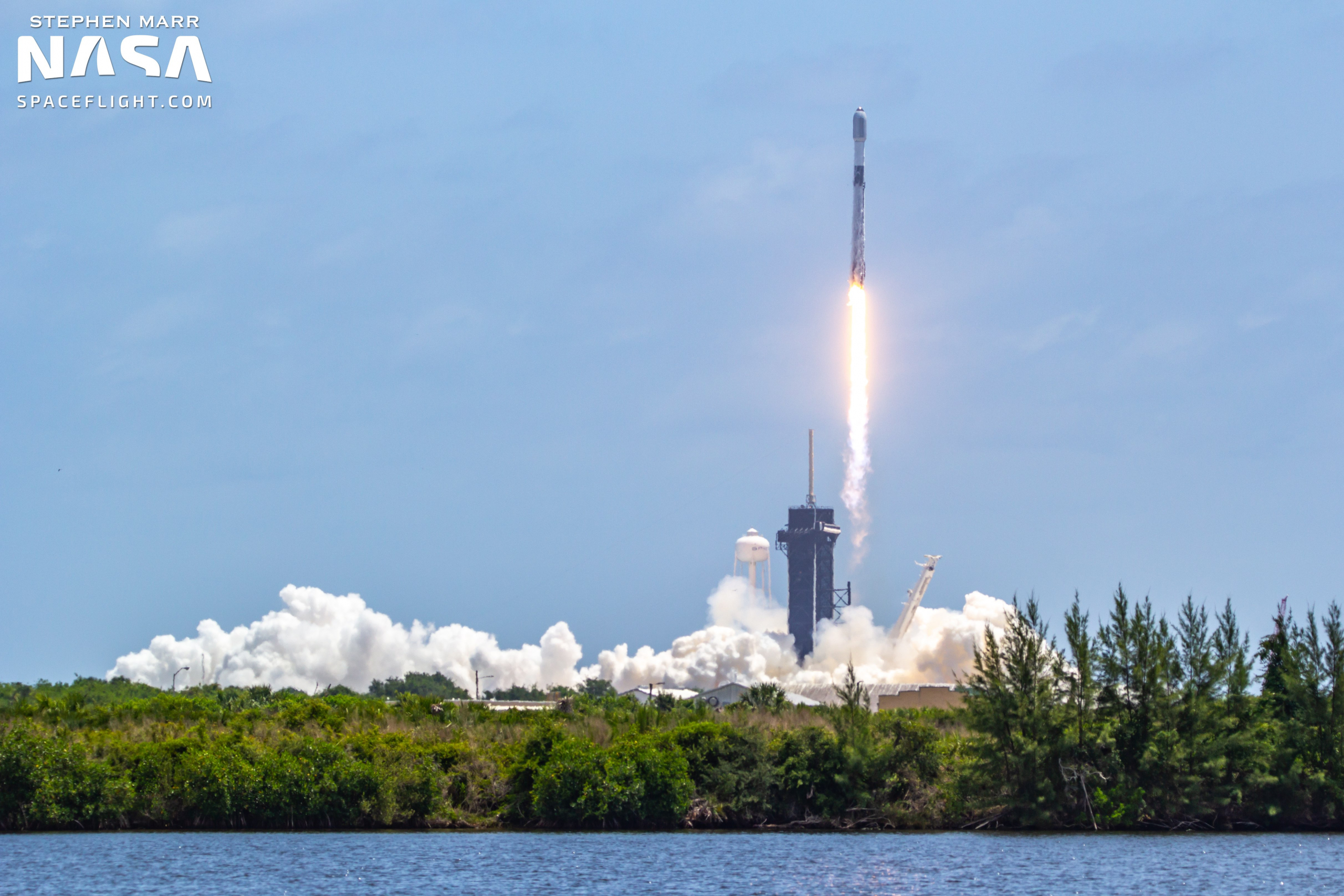 SpaceX launched yet another 53 Starlink satellites to low Earth orbit. The liftoff at 12:09 PM EDT (16:08 UTC) on Friday was from the historic Launch Complex 39A at NASA’s Kennedy Space Center in Florida. This mission marked SpaceX’s second launch of the month, its 24th launch of 2022, and the company’s 50th launch from Pad 39A.

In addition to being the 100th reflight of a Falcon rocket, this mission marked a record-setting 13th launch of the Falcon 9 booster B1060 and was the company’s 50th consecutive successful landing.

B1060 has previously supported the launch of the US Space Force’s GPS III-3 satellite, Turksat-5A, the Transporter-2 rideshare mission, and nine Starlink missions. SpaceX is slowly increasing its reusability envelope to significantly increase its launch cadence.

The Starlink satellites were placed into an initial 53.2º inclination, 232 x 337-kilometer orbit.

Over the coming months, they will make use of their onboard krypton-propellant ion engines to slowly reach their operational 540-kilometer circular orbits.

As the Falcon 9 lifts off, the rocket headed northeast from Cape Canaveral, past the coast of the Carolinas. Stationed over 640 kilometers downrange from LC-39A was one of SpaceX’s Autonomous Spaceport Drone Ships, A Shortfall of Gravitas (ASOG), tugged by Zion M Falgout in the Atlantic Ocean.

Alongside ASOG is SpaceX’s multipurpose vessel, Doug, named after one of the astronauts who flew on SpaceX’s Demo-2 mission. Doug provided ASDS support for this mission and will recover the fairings after they splash down on the Atlantic Ocean.

Starlink is SpaceX’s constellation of internet satellites in low Earth orbit that aims to provide internet access to most of Earth, primarily serving areas devoid of a fiber connection. One of SpaceX’s two most capital-intensive projects, it has been under development for some time, with the first regulatory filings dating back to 2014.

Over the years, the plan underwent various changes, but in February 2018, SpaceX’s Tintin A and B satellites, experimental precursors to the operational Starlink satellites, were launched as secondary payloads from the then Vandenberg Air Force Base.

The constellation consists of five groups of satellites, or “shells,” which will operate at different altitudes and orbital planes. As denoted by the first number in the mission name — in this case, “4” for Starlink 4-19 — the mission targets the fourth shell of the Starlink Constellation.

SpaceX is actively filling up the fourth shell of the mega-constellation, which when complete will increase the capacity and reduce the latency for customers located between 52 degrees North and 52 degrees South latitude.

The company is hoping to launch 40 Starlink missions this year to complete this shell, after which they are expected to start filling the second shell.

At T-38 minutes, the Launch Director gave a go for propellant loading, pending favorable conditions. At T-35 minutes, SpaceX began loading sub-cooled RP-1 kerosene onto both the first stage and the second stage as well as super-chilled LOX (liquid oxygen) onto the first stage.

SpaceX, unlike other launch providers, uses RP-1 which is cooled to -7 degrees Celsius along with LOX which is cooled to -205 degrees Celsius. Using supercooled propellants increases the performance of Falcon 9 by densifying the fluids, and packing more energy into a smaller space. This is beneficial for reuse since the first stage must reserve some energy for landing.

Cargo unloads, cruise ship refuels and B1060 being processed by sunrise. Welcome to Port Canaveral!

Just before T-20 minutes, the second stage RP-1 load was completed, marked by a large vent from the T/E (Transporter Erector). This vent indicates the purging of the T/E lines ahead of the start of LOX load onto the second stage at T-16 minutes.

At T-7 minutes, the Falcon 9 allowed a small amount of liquid oxygen to enter the nine Merlin 1D engines on the first stage. This process cools the engines slowly so they do not get damaged from thermal shock when super chilled LOX starts to flow through them at full volume during engine start.

At T-1 minute, the Falcon 9 started up and began pressurizing its tanks for flight. At this point, its onboard computers assumed full control of the countdown, and any technical aborts from this point forward would have been handled autonomously and not by the ground operators.

At T-45 seconds, the Launch Director verified that all positions are go for launch. At T-3 seconds, the rocket’s flight computer commanded the ignition of the nine Merlin 1D engines on the first stage. The ignition happens in pairs, within milliseconds of each other to reduce startup transients and loads on the vehicle.

Once the computers ensure all systems are working nominally, they commanded the hydraulic clamps at the base of the vehicle to release, letting the Falcon 9 lift off from the pad. 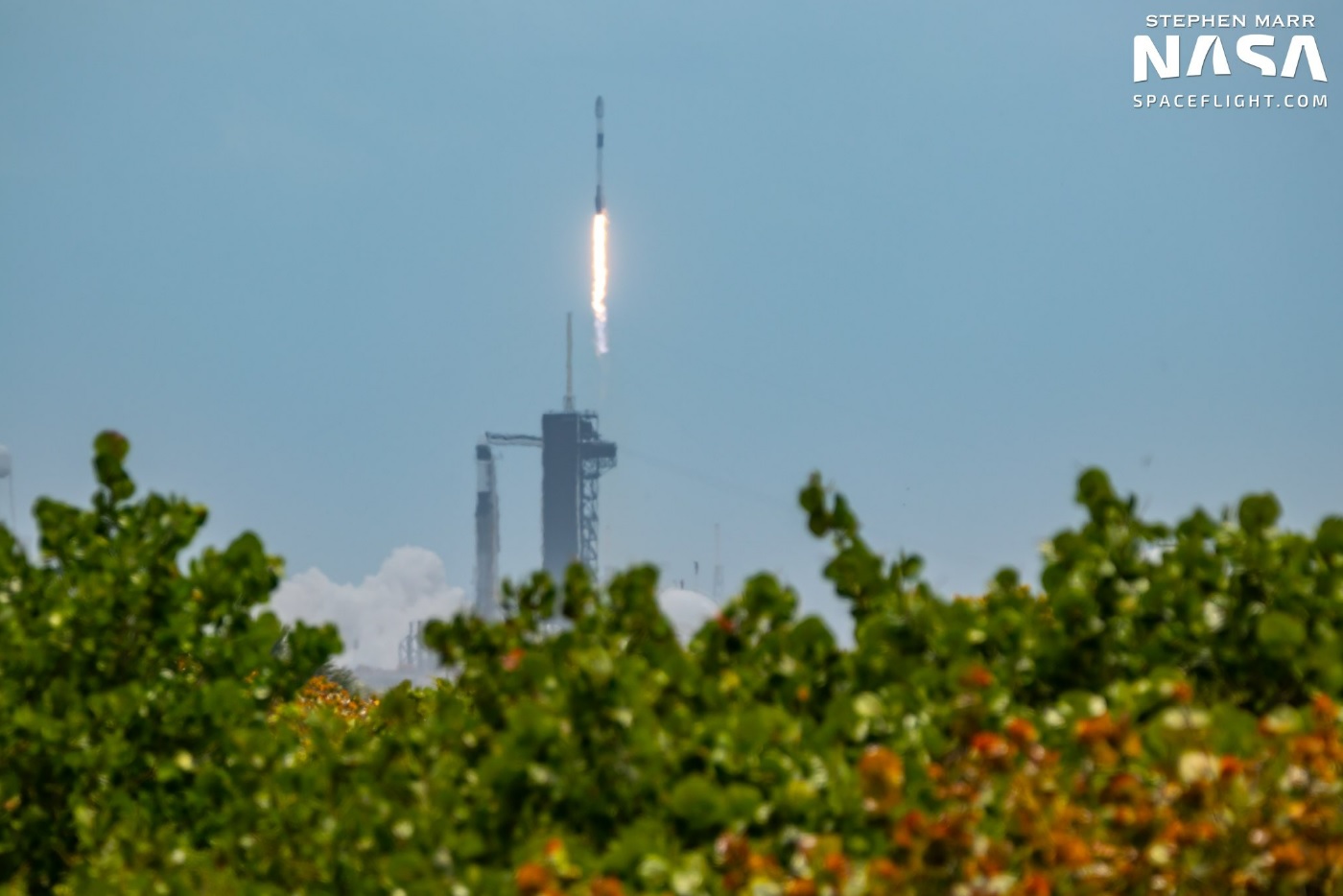 B1060 fired its engines for approximately two and a half minutes before shutting down, once again in a staggered formation to reduce loads on the vehicle.

The first stage then separated from the second stage using pneumatic pushers, followed by ignition of the second stage’s single vacuum optimized Merlin engine seconds later. Meanwhile, after coasting up to its apogee and beginning its descent, B1060 performed two burns to softly touch down on A Shortfall of Gravitas.

The second stage, meanwhile, continued to burn toward orbit. At around two minutes and 42 seconds after launch, the vehicle commanded the latches connecting the fairing halves to release. The fairing halves then used their onboard RCS thrusters to reenter the Earth’s atmosphere before softly splashing down in the Atlantic. They’ll be recovered by SpaceX’s multipurpose ship Doug.

About eight minutes and 45 seconds after launch, the second stage shut down its Merlin Vacuum engine. From this point, the vehicle used its RCS thrusters to start rotating around its x-axis. At T+15 minutes 26 seconds, the vehicle commanded the deployment of the tension rods used to keep the stack of Starlink satellites together, and the satellites slowly drifted away from the second stage.

Shortly after, the second stage will perform a deorbit burn and destructively reenter Earth’s atmosphere, leaving only the tension rods as debris objects which will naturally decay. The Starlink satellites will, meanwhile, will begin maneuvering toward their operational orbits.