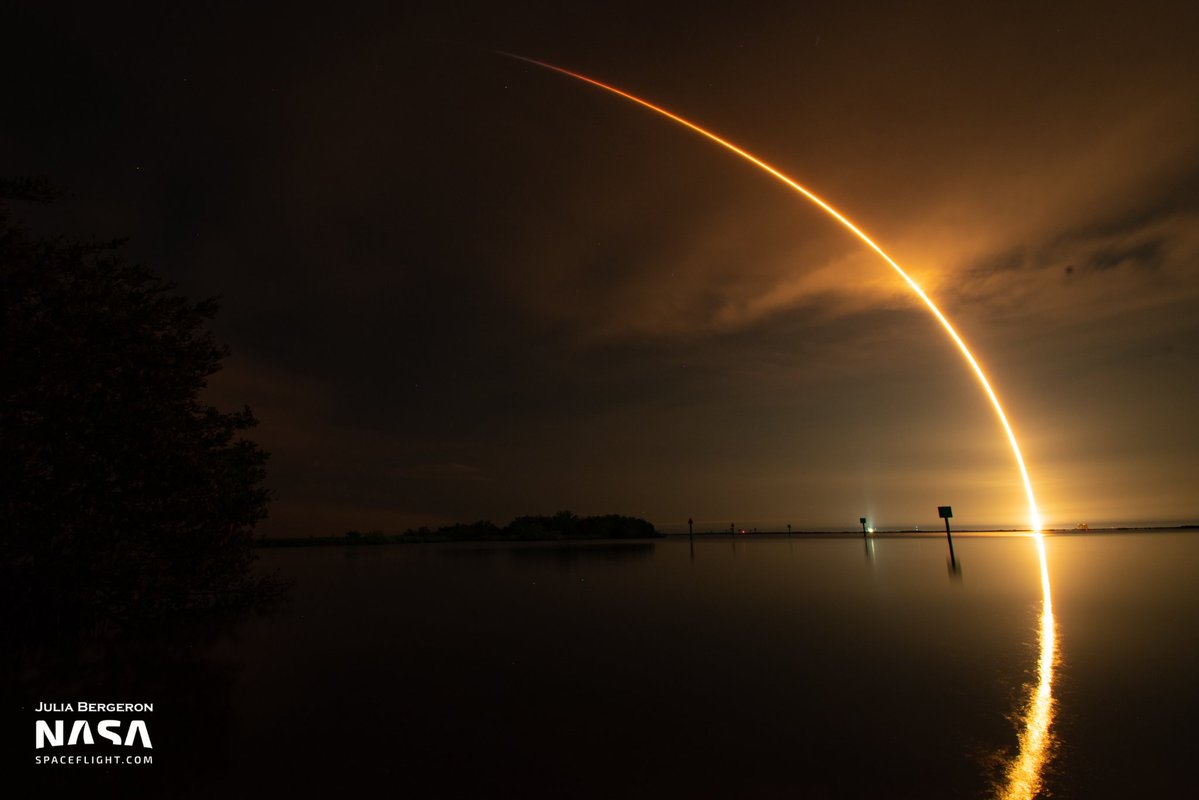 SpaceX launched its Falcon 9 rocket on a secretive mission in the early hours of Sunday morning. Liftoff occurred at 12:27 AM EDT (04:27 UTC) from Space Launch Complex 40 of the Cape Canaveral Space Force Station, with the rocket’s official mission being the deployment of a single replacement satellite for communications operator Globalstar.

The Globalstar-2 FM15 spacecraft was manufactured by Thales Alenia Space as part of Globalstar’s second-generation constellation of low Earth orbit (LEO) communications satellites. While 24 of its sister craft were deployed between 2010 and 2013, it has remained on Earth until now as a ground spare. Now, it is launching to be on hand to reinforce the network as the existing satellites begin to show their age.

Globalstar uses its fleet of satellites to provide voice and data communications worldwide. The company’s first-generation constellation was deployed between 1998 and 2000 and consisted of 48 operational satellites plus on-orbit spares. The second-generation system was originally designed with 32 satellites but downsized to the 24 that are currently in orbit.

These second-generation satellites, including FM15, are based on Thales’ Extended Lifetime Bus 1000 (ELiTeBus-1000) platform and have an operational life expectancy of 15 years. The 24 satellites already in orbit were launched in groups of six atop Soyuz-2-1a/Fregat rockets, which flew from the Baikonur Cosmodrome. Globalstar plans to replace these satellites with a third-generation spacecraft which will be phased in from 2025.  Earlier this year the company awarded a contract to Canada’s MDA Corporation to build the first 17 replacement satellites.

FM15 was part of an initial batch of 25 satellites procured for Globalstar’s second-generation constellation. The company had intended to order additional satellites as spares; however, in 2011 Thales rejected an order for an additional six spacecraft after a contractual dispute between the two companies. This has left FM15 as Globalstar’s only available spare satellite, and it has been held in reserve until now. Launching FM15 will help to keep the constellation operational until the MDA-built satellites begin to come online.

With a mass of 700 kilograms, the Globalstar-2 satellite is well below the carrying capacity of the SpaceX Falcon 9 rocket that has been selected to deliver it to orbit. In addition, the Falcon 9’s first stage booster landed aboard the Autonomous Spaceport Drone Ship (ASDS) Just Read the Instructions downrange of Cape Canaveral.

The ASDS is typically used when the rocket is carrying heavier payloads or targeting higher orbits, where performance constraints prevent it flying a Return To Launch Site (RTLS) profile instead.

These factors lend weight to rumors that a clandestine US Government payload was also aboard the rocket for Sunday’s launch, joining Globalstar-2 FM15 for the ride into orbit.

If so, this is an unusually high level of secrecy: for most classified launches the agency responsible is at least identified and the launch is announced – often with an unclassified mission name such as the NRO Launch (NROL) designations used by missions for the National Reconnaissance Office (NRO).

Images of the second stage during the coast phase did show a rather unique setup on the adaptor. 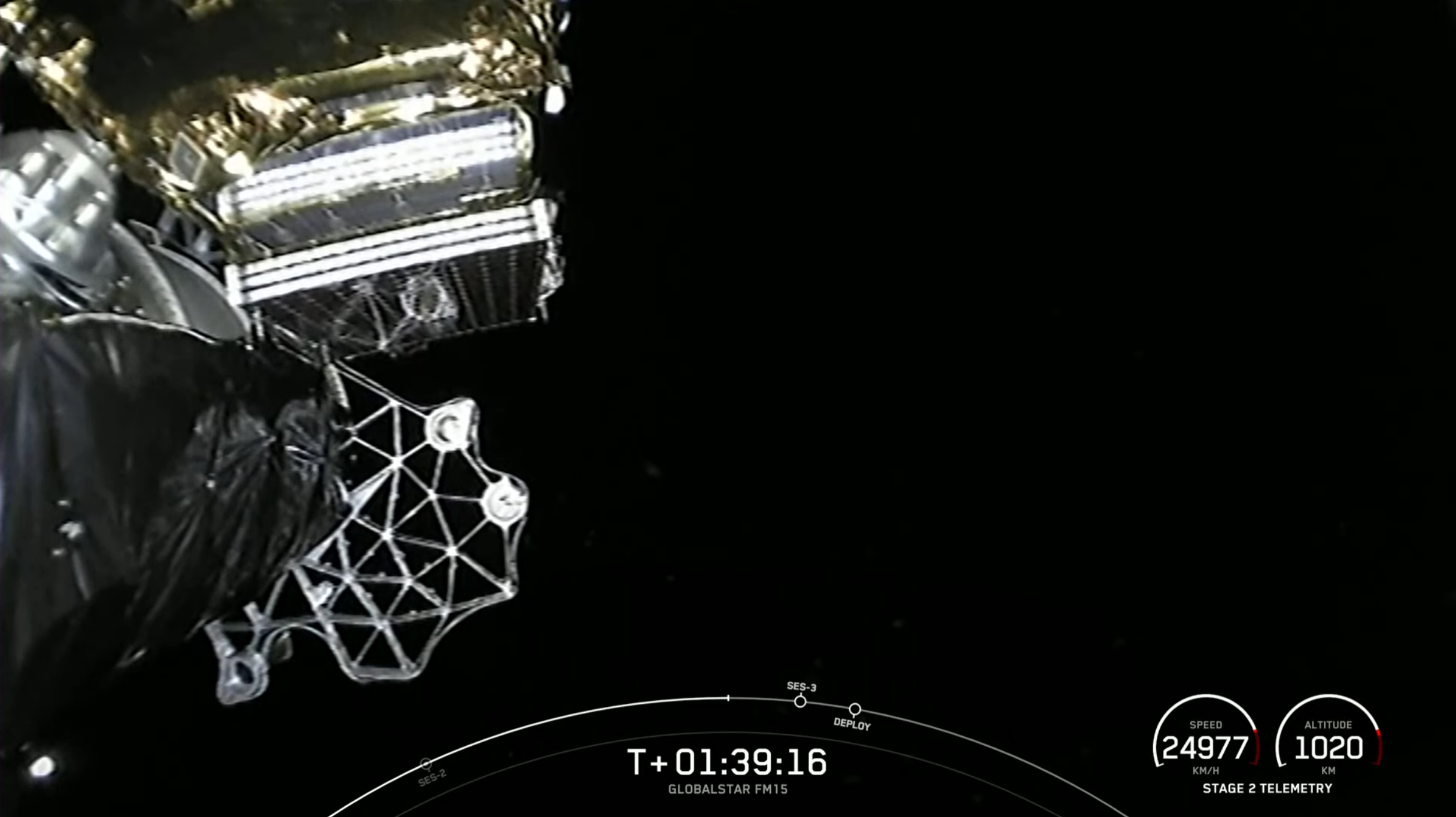 One notable past exception to this practice was a previous Falcon 9 launch, carried out in January 2018. That launch carried a satellite called Zuma, built by Northrop Grumman for a still-undisclosed US Government customer. Flying an RTLS mission, Falcon successfully delivered Zuma into a planned low Earth orbit with an inclination of around 51°.

As part of the payload, however, Northrop Grumman had provided their own separation mechanism to attach Zuma to the rocket, and this reportedly failed to operate. This meant that the satellite was still attached to Falcon’s upper stage when it performed a deorbit burn to dispose of itself safely and was destroyed when the stage burned up in the Earth’s atmosphere on re-entry. 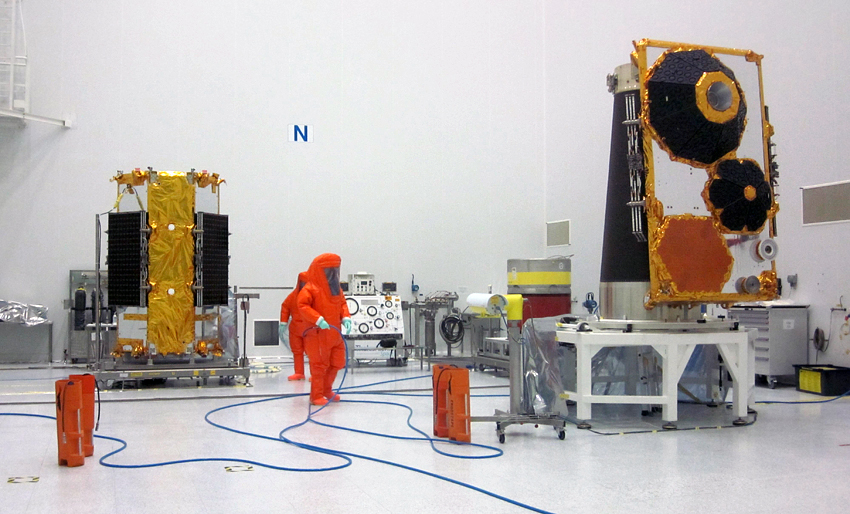 With Globalstar’s constellation operating in a 52° orbit, if FM15 has a co-passenger that is a successor to or replacement for Zuma the rocket will not have to make a particularly significant adjustment to its orbit in order to deploy the two satellites on their planned courses. On the other hand, the Zuma launch did not require the ASDS for recovery – although this could be explained by the additional presence of the Globalstar satellite and the need to deploy the satellites into different orbits.

Two NRO launches have also flown to similarly-inclined orbits in recent years, both aboard Falcon 9 rockets. NROL-76 was launched in May 2017 and NROL-108, which consisted of two satellites, followed in December 2020. It is currently unclear whether these missions are related to each other, with observers speculating that they might be technology demonstrators.

It is also possible that the second payload could be another lightweight satellite – or, indeed, several smaller satellites – leaving Falcon 9 with more performance to spare for orbit-changing maneuvers. This might allow it to unload its secret cargo into a completely different orbit after first dropping the Globalstar spacecraft off on its planned trajectory.

Either way, barring any official acknowledgment of the clandestine aspect of Sunday’s launch, the first indications of what Falcon 9 has deployed into orbit are likely to come from amateur satellite watchers who post their observations to mailing lists like SeeSat-L. 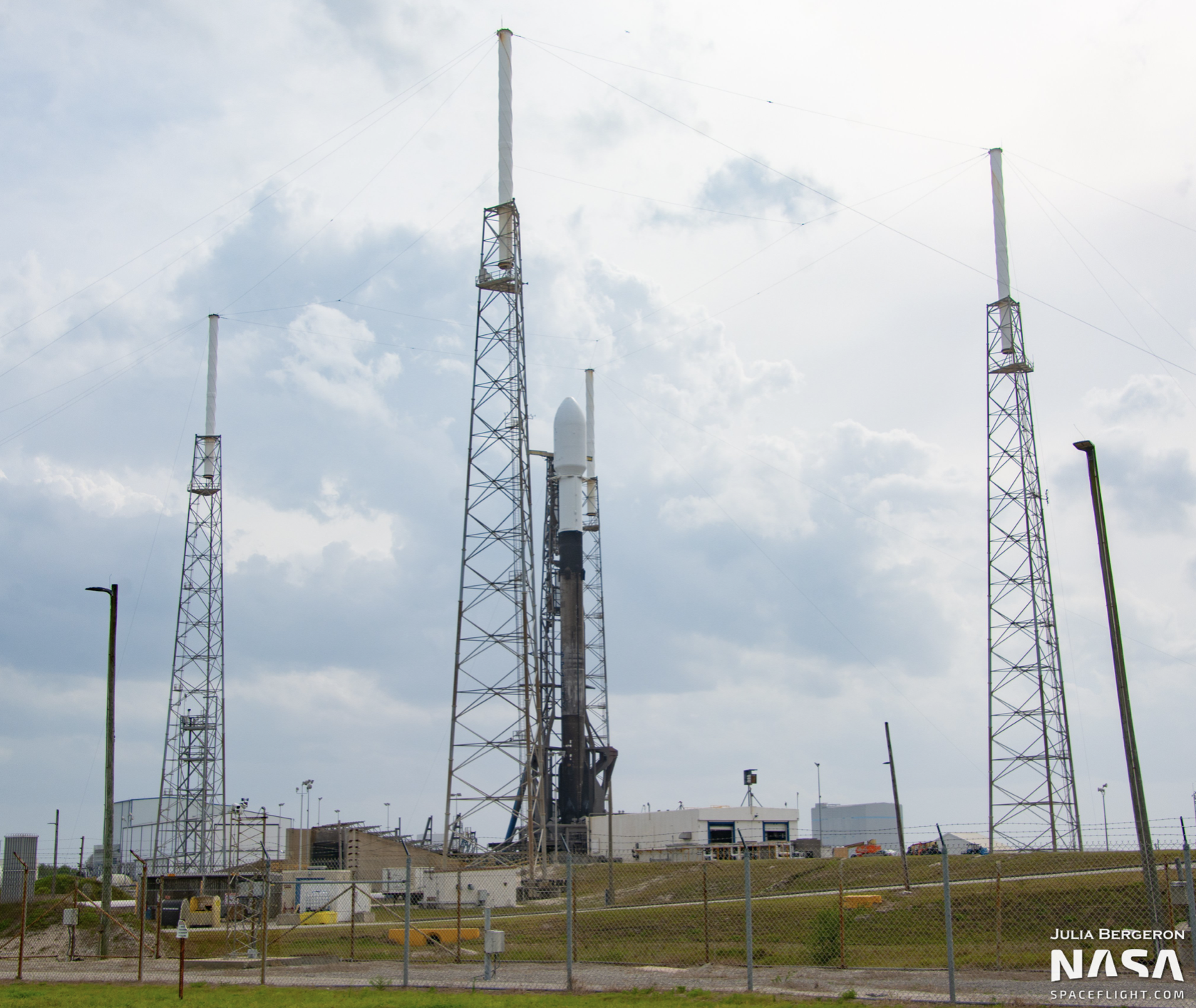 Falcon 9 B1061 at SLC-40 ahead of the Transporter-4 mission in April (Credit: Julia Bergeron for NSF)

Before the payloads can be observed in orbit, however, they first had to get there. SpaceX used a Falcon 9 rocket to carry out Sunday’s mission, with liftoff occurring from Space Launch Complex 40 (SLC-40) at the Cape Canaveral Space Force Station.

Falcon 9 is a two-stage rocket consisting of a reusable first stage booster and an expendable second stage. A payload fairing – which can also be recovered and re-used – encloses the satellites at the nose of the rocket. SpaceX launched its first Falcon 9 in June 2010, and the vehicle has since completed over 150 successful missions, with only one in-flight failure.

Nine Merlin-1D engines, developed in-house by SpaceX, powered the rocket’s first stage during the early phase of its flight. After lifting off from SLC-40, the rocket rolled and pitched over onto a north-easterly heading to align with its target orbit. About 70 seconds into the flight, it passed through Max-Q, the area of maximum dynamic pressure, going supersonic around the same time.

The first stage that powered Sunday’s mission was booster B1061-9. A veteran of eight previous launches, it first flew in November 2020 and has flown one of the most eclectic collections of missions for any Falcon 9 booster. Its first two missions were dedicated to NASA’s Commercial Crew program, assisting the program’s first operational crew rotation flights to the International Space Station by boosting Crew Dragons Resilience and Endeavour into orbit on their respective Crew-1 and Crew-2 missions.

The booster’s first uncrewed launch came in June 2021 when it helped deploy the SXM-8 communications satellite for SiriusXM before flying a Cargo Dragon mission, CRS-23, in August. B1061’s fifth launch deployed NASA’s Imaging X-Ray Polarimetry Explorer (IXPE) last December. Since then, the booster has carried out a Starlink launch – Group 4-7 in February – and has flown the two most recent multi-payload Transporter missions in April and May. 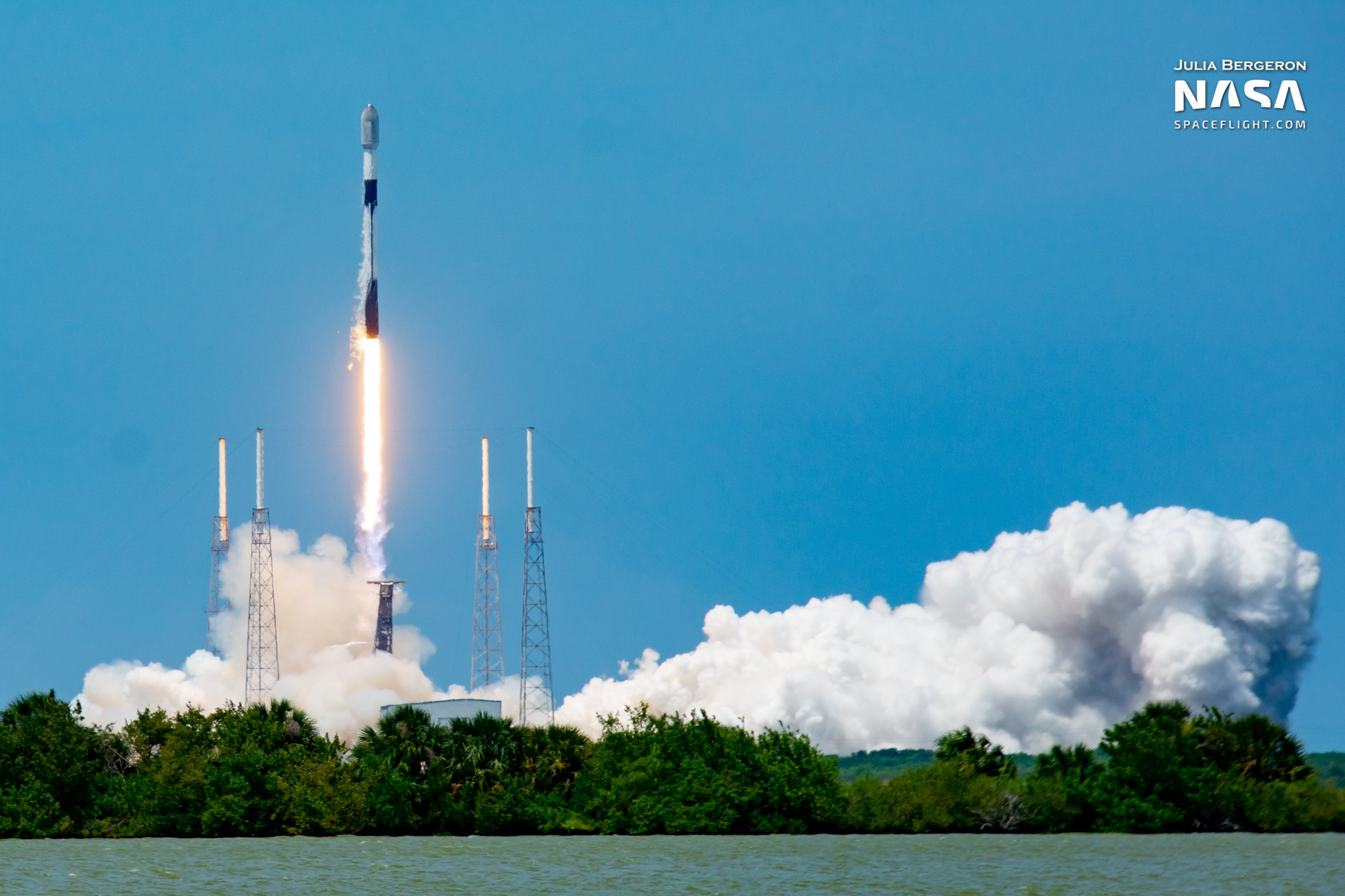 B1061 lifts off on its previous launch, Transporter-5, in May (Credit: Julia Bergeron for NSF)

B1061-9 powered Sunday’s mission for about the first two minutes and 31 seconds of flight before its engines shut down: an event designated Main Engine Cutoff, or MECO. Stage separation occurred about four seconds later, with Falcon’s second stage continuing towards orbit with the payloads while B1061-9 began its return to Earth. The second stage lit its single Merlin Vacuum (MVac) engine, a vacuum-optimized version of the Merlin-1D, about eight seconds after staging.

The two halves of the fairing fell away from the rocket at T+ two minutes and 54 seconds, having completed their job of protecting the payload during the climb through the atmosphere. After re-entry, each half of the fairing will deploy a parachute as it descends into the Atlantic Ocean, where SpaceX’s recovery boats will pick them up and return them to shore for future re-use.

The second stage completed a series of three burns prior to deploying the Globalstar payload at T+ one hour, 53 minutes, and 21 seconds. If any unannounced rideshare payloads are to be deployed on Sunday’s mission, it is not clear whether they would separate before or after Globalstar.

While the second stage continued towards orbit to fulfill the primary objectives of Sunday’s mission, B1061-9 made its return to Earth. After stage separation, it reoriented itself and deployed the grid fins that will help to provide guidance as it falls back through the atmosphere. With the drone ship Just Read The Instructions positioned downrange to receive it, no boostback burn was required during this mission, so it only needed to make entry and landing burns during this flight.

B1061 arriving at Port Canaveral on Monday pic.twitter.com/oiB0iU2kHK

(Photo caption: B1061 returns to Port Canaveral aboard Just Read The Instructions after the Transporter-4 mission)

The entry burn helps to reduce heating on the stage as it re-enters the atmosphere, using three of the Merlin-1D engines. Shortly before touchdown, the center engine lit up again for the landing burn, slowing B1069-9 to a soft touchdown on the deck of Just Read The Instructions.

Sunday’s launch was the third Falcon 9 mission in the space of 36 hours, which have used all three of SpaceX’s launch pads. The trio of launches began with a Starlink mission from Falcon’s other East Coast launch pad: Launch Complex 39A at the Kennedy Space Center, at 12:09 PM EDT (16:09 UTC) on Friday. This was followed by Saturday’s launch of the German SARah-1 radar imaging satellite out of Vandenberg Space Force Base on the West Coast. The SARah-1 launch lifted off at 7:19 AM PDT (14:19 UTC), less than 15 hours before the Globalstar mission.