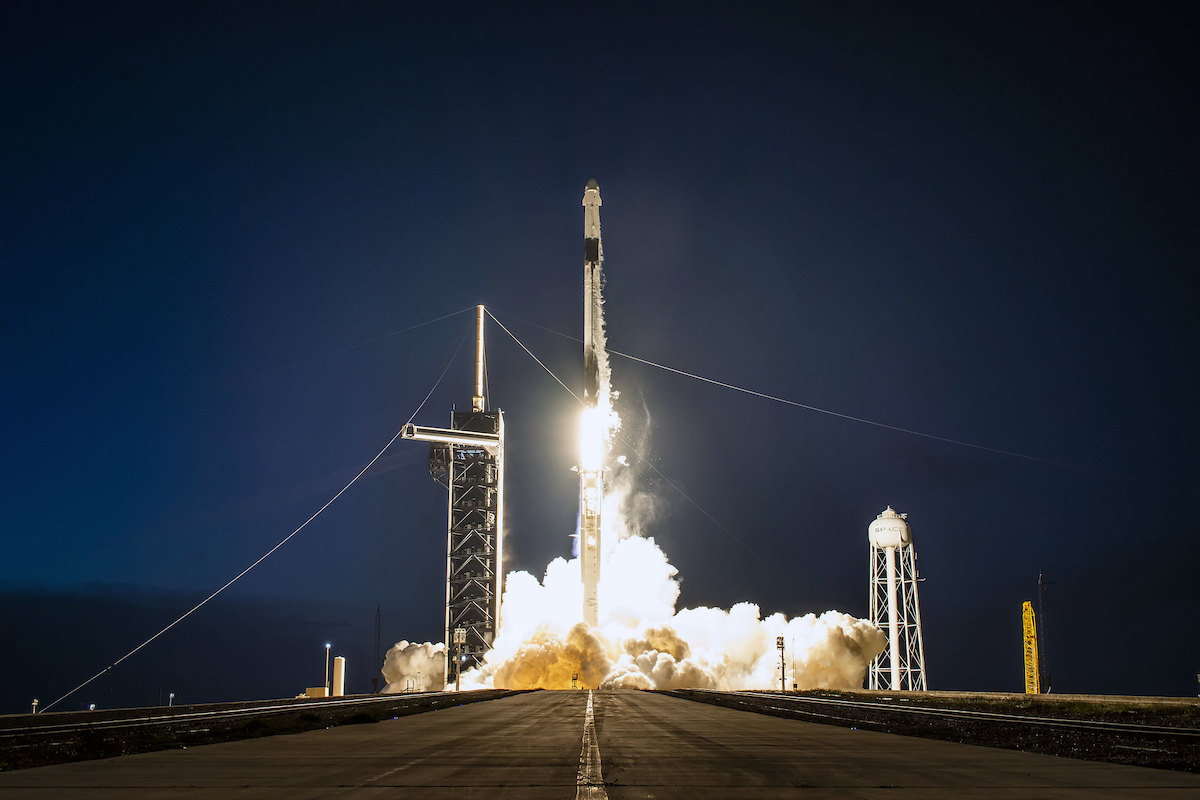 The 5,881 pounds (2,668 kilograms) of cargo headed off on a day-and-a-half pursuit of the space station with a successful launch aboard a SpaceX Falcon 9 rocket at 8:44:22 p.m. EDT Thursday (0044:22 GMT Friday). The 215-foot-tall (65-meter) Falcon 9 rocket took off from pad 39A at the Kennedy Space Center, and vectored thrust from its nine Merlin engines to head northeast, lining up with the orbital plane of the space station.

After breaking the sound barrier and rocketing into the stratosphere, the Falcon 9 jettisoned its 15-story-first stage booster about two-and-a-half minutes into the mission. The separation of the first stage allowed the second stage to ignite its single Merlin engine to continue the flight into orbit.

The first stage, meanwhile, pulsed its cold gas nitrogen thrusters to flip around to a tail first orientation, where three of its engines lit for a “boost back” burn to cancel out some of the rocket’s downrange velocity. The dueling plumes from the Falcon 9’s first and second stages pushed against each other at the edge of space, where sunlight illuminated the exhaust particles.

With the launch occurring about 20 minutes after sunset at ground level, the bright white exhaust clouds appeared like a celestial nebula visible from hundreds of miles around. The first stage later performed an entry burn, then ignited a single engine for a final braking maneuver to slow down for its vertical landing on a SpaceX drone ship nearly 200 miles (about 300 kilometers) northeast of Cape Canaveral.

The landing marked the conclusion of the fifth flight for this booster — tail number B1067 — and SpaceX’s 130th successful landing of a Falcon rocket booster since 2015.

The Falcon 9’s upper stage burned for about six minutes to accelerate the Dragon cargo ship into orbit. The unpiloted supply freighter separated from the Falcon 9 upper stage nearly 12 minutes into the mission. An on-board camera on the upper stage showed the capsule flying free of the rocket.

The launch kicked off SpaceX’s 25th cargo mission to the International Space Station under a series of Commercial Resupply Services contracts with NASA. This mission, named CRS-25, is the fifth cargo mission under SpaceX’s newest resupply contract.

Docking at the space station is set for 11:20 a.m. EDT (1520 GMT) Saturday. NASA astronaut Jessica Watkins and Bob Hines will monitor the Dragon spacecraft’s final automated approach and docking from inside the station, ready to send hold or abort commands in the event of a problem.

SpaceX is under contract with NASA for at least 10 more resupply flights to the station, carrying the Dragon cargo program through the CRS-35 mission slated for some time in 2026.

Dazzling views of the Falcon 9’s main engine cutoff, stage separation, second stage ignition, and the boost back burn by the first stage to head for landing on a drone ship. https://t.co/5Y0a3gn3ou pic.twitter.com/KYnJ1QzUhH

The Dragon cargo ship launched Thursday night with around 5,800 pounds of supplies and payloads, including a NASA climate instrument to be mounted outside the space station.

Dust storms can spread from continent, where they can cause temperatures to rise or fall, form clouds, provide nutrients to ocean and land organisms, restrict visibility, and pose a health hazard to people.

“This is an important cycle in the Earth system,” said Rob Green, EMIT’s principal investigator and a senior research scientist at JPL.

The EMIT instrument will be removed from the trunk of the Dragon spacecraft after docking by the space station’s Canadian-built robotic arm, and placed on a mounting bracket on the lab’s port-side truss. EMIT will measure the mineral composition of desert soils with a visible and shortwave infrared spectrometer.

Green said EMIT, which is designed to observe for at least 12 months, will “close a gap in knowledge about mineral dust source regions of our planet.” A NASA spokesperson said the EMIT instrument, which is part of the agency’s Earth Venture program, cost about $118 million.

“Right now, our knowledge is traced to abut 5,000 mineral analyses where minerals have been collected and analyzed. When EMIT completes its mission, we will have a billion direct observations of the mineral composition fo the Earth’s arid land,” Green said.

The space station’s orbit will take the EMIT instrument over most of the world’s deserts, including the Sahara Desert of Africa, the Middle East, and deserts of Asia, Australia, and the western Americas.

“Whether it’s an iron oxide, kind of like rust, or a carbonate, or a clay, those different mineral molecules leave fingerprints in the light we get to measure,” Green said.

Here’s a split screen view of the Falcon 9 booster — tail number B1067 — making its fifth landing. The booster landed on the drone ship “A Shortfall of Gravitas” east of Jacksonville, Florida. https://t.co/5Y0a3gn3ou pic.twitter.com/d1qiDBYxCL

The CRS-25 mission was scheduled for launch in early June, but officials grounded the Dragon spacecraft after finding a leak in the ship’s propulsion system. SpaceX detected “elevated vapor readings” of monomethyl hydrazine, or MMH, fuel in an “isolated region” of the Dragon spacecraft’s propulsion system during propellant loading ahead of the launch in early June, NASA said in a statement.

The Dragon spacecraft carries hydrazine and nitrogen tetroxide propellants to power its Draco thrusters for in-orbit maneuvers, including rendezvous burns to approach the space station, and the deorbit burn at the end of the mission to return to Earth.

Read more about the leak in our mission preview story.

The reusable Dragon cargo ship on the CRS-25 mission is flying to the space station for the third time.

The Dragon spacecraft will also deliver five NASA-sponsored CubeSats to the space station for deployment though the Japanese Kibo lab module. All told, the CRS-25 mission is carrying equipment to support about 40 research investigations, according to Heidi Parris, NASA’s associate scientist for the space station program.

Other experiments on the CRS-25 mission will investigate how the immune system changes in microgravity, crop growth in space, and a study looking at an alternative to concrete that could be used to construct structures on the moon or Mars.

There’s also a spare battery charge/discharge unit for the station’s power system in the Dragon trunk, next to the EMIT instrument. Like EMIT, the power unit will be robotically extracted from the Dragon’s rear cargo bay and placed in a stowage position outside the station.

Astronauts inside the space station will get to work unpacking supplies inside Dragon’s pressurized compartment.

Dragon separation. SpaceX’s cargo ship is flying free of the Falcon 9 rocket on the way to the International Space Station.

Two mission payloads — a NASA dust measuring instrument and a battery charge/discharge unit — are seen in the Dragon trunk.https://t.co/5Y0a3gn3ou pic.twitter.com/o6YU9L3ePf

At the end of the mission, the Dragon cargo ship will undock from the station and head for splashdown off the coast of Florida with several tons of equipment. A SpaceX recovery boat will be in position to retrieve the capsule from the sea and return it to Cape Canaveral for unpacking and refurbishment.

The cargo slated for return to Earth on the CRS-25 mission in mid-August includes a spacesuit worn by European astronaut Mattias Maurer on a spacewalk in March. Astronauts found water inside Maurer’s spacesuit helmet after he safely returned inside the station, a similar issue to the problem that caused a spacewalk emergency in 2013 when European astronaut Luca Parmitano had to cut short a spacewalk due to a water leak.

“We’ve got to get that suit home got take a look at it as part of the investigation to really try to understand what happened to the suit, and that’ll be part of what we need for our assessment for our eventual readiness when we look at returning back to nominal EVAs (spacewalks),” Weigel said.