Live coverage of the countdown and launch of a SpaceX Falcon 9 rocket from Space Launch Complex 40 at Cape Canaveral Space Force Station in Florida. The Starlink 4-23 mission will launch SpaceX’s next batch of 54 Starlink broadband satellites. Follow us on Twitter.

SpaceX hauled another 54 Starlink internet satellites into orbit Saturday night from Cape Canaveral, setting a record for the heaviest payload ever launched by a Falcon 9 rocket. The launch occurred days after SpaceX and T-Mobile unveiled plans to use a new generation of Starlink spacecraft to provide ubiquitous connectivity to existing cell phones.

Fifteen minutes later, the Falcon 9’s upper stage released a stack of Starlink internet satellites into an orbit targeted between 144 miles and 208 miles (232-by-336 kilometers). The launcher aimed for an orbital inclination of 53.2 degrees to the equator.

Weather conditions were iffy Saturday night, with thunderstorms and lightning in the area around the launch site. SpaceX skipped a launch opportunity at 10:22 p.m. EDT (0222 GMT) due to the storms, but weather improved for the second of two launch times available Saturday at 11:41 p.m.

The launch Saturday night, known as Starlink 4-23, carried 54 Starlink payloads, one more than SpaceX’s recent missions to the same orbit. SpaceX has experimented with engine throttle settings and another minor upgrades to stretch the Falcon 9’s lift capability.

The 53 satellites on recent Starlink flights maximized the rocket’s payload performance, representing the heaviest payloads ever launched on a Falcon 9.

The addition of one more satellite — each Starlink craft weighs more than a quarter-ton — may suggest SpaceX has slightly improved the capacity of the Falcon 9’s payload envelope, and the satellites on Saturday night’s flight added up to the heaviest cargo ever lofted on a SpaceX mission, according to Jessie Anderson, a SpaceX engineer and commentator on the company’s launch webcast.

The total payload mass with 54 Starlink satellites added up to more than 36,800 pounds, or 16.7 metric tons, Anderson said.

The launch of the Starlink 4-23 mission came about 33 hours before NASA is scheduled to launch the giant Artemis 1 moon rocket from nearby Kennedy Space Center. The Space Launch System rocket is standing on pad 39B at Kennedy, about 5 miles (8 kilometers) north of the Falcon 9’s launch site at pad 40. 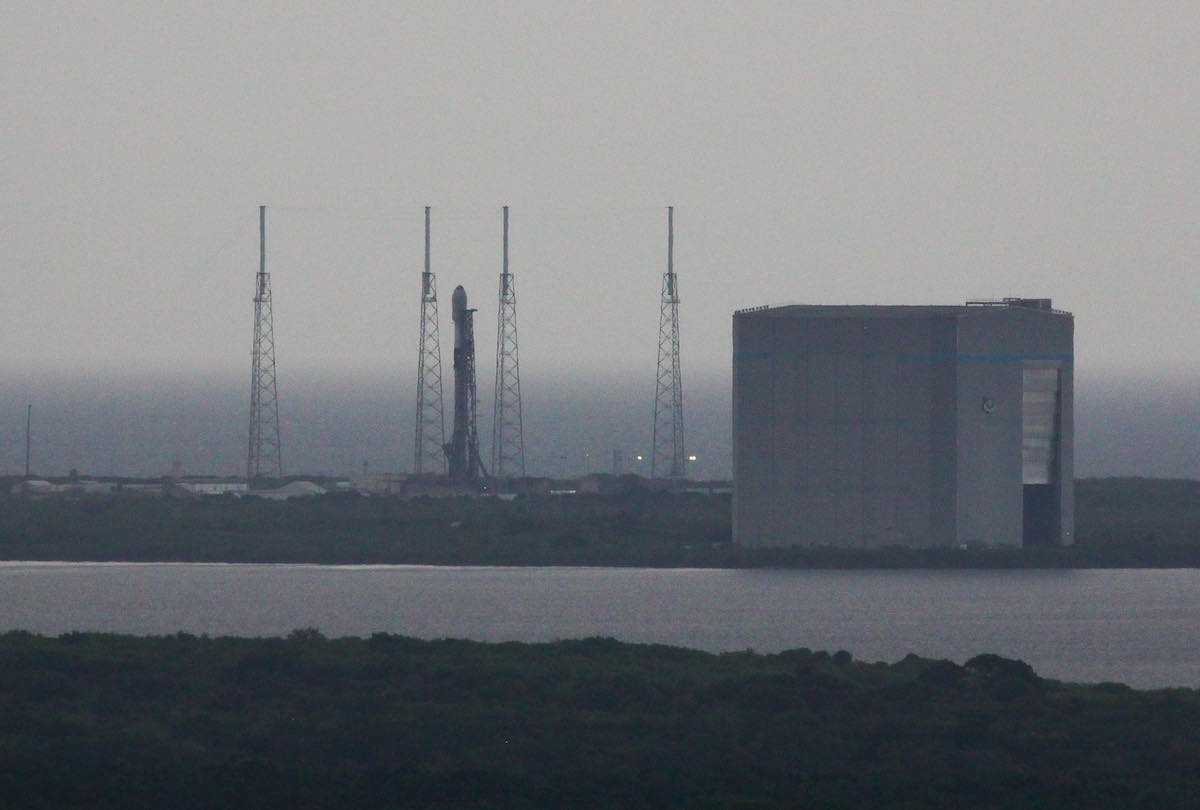 SpaceX’s latest Starlink launch also occurred two days after the company announced a deal with T-Mobile to use the next generation of Starlink satellites to link up directly with cell phones. The second-generation Starlink satellites are much larger than the current design, and will launch on SpaceX’s new huge Starship rocket currently in development.

That large antenna will have the sensitivity to receive faint signals from existing cell phones.

“It’s a lot like putting a cellular tower in the sky, just a lot harder, and that’s why we’re here with the world experts at SpaceX because we’re using a piece of spectrum that your phone already knows … how to connect to,” Sievert said. “In fact, the vast majority of phones out there, our aspiration is for them to work right out of the gate with this.”

According to Musk, the Starlink V2 network will beam about 2 to 4 megabits of bandwidth to be shared among users within a certain region, or cell zone. That’s enough to enable texting, images, voice calls, and in some cases, video streaming, Musk said.

“This won’t have the kind of bandwidth that a Starlink terminal will have,” Musk said.

But it could eventually eliminate dead zones in cellular connectivity. “This is quite a difficult technical challenge, but we have it working in the lab and we’re confident this will work in the field,” Musk said. “It’s actually quite a lot of extra hardware on the satellite, and it’s also a lot of software.”

Sievert touted the importance of cell phone-to-satellite connectivity for public safety, emergency responders, and people who live in or are traveling through rural areas without traditional cell phone service. He said it will initially be rolled out in the continental United States, Hawaii, large swaths of Alaska, Puerto Rico, and U.S. territorial waters, and will be available at no additional charge on T-Mobile’s most popular cell phone plans.

SpaceX and T-Mobile want to have the Starlink V2 system up and running by the end of 2023 to begin beta testing. The Starship launch vehicle SpaceX wants to use for launches of Starlink V2 satellites has not yet flown into orbit.

Musk said SpaceX is looking at an “interim solution” to develop a smaller version of the Starlink V2 satellite that can fit on a Falcon 9 rocket “if the Starship program is delayed longer than expected.” The baseline Starlink V2 design to is large for a Falcon 9 launch.

Helium pressurant also flowed into the rocket in the last half-hour of the countdown. In the final seven minutes before liftoff, the Falcon 9’s Merlin main engines were thermally conditioned for flight through a procedure known as “chilldown.” The Falcon 9’s guidance and range safety system were also configured for launch. 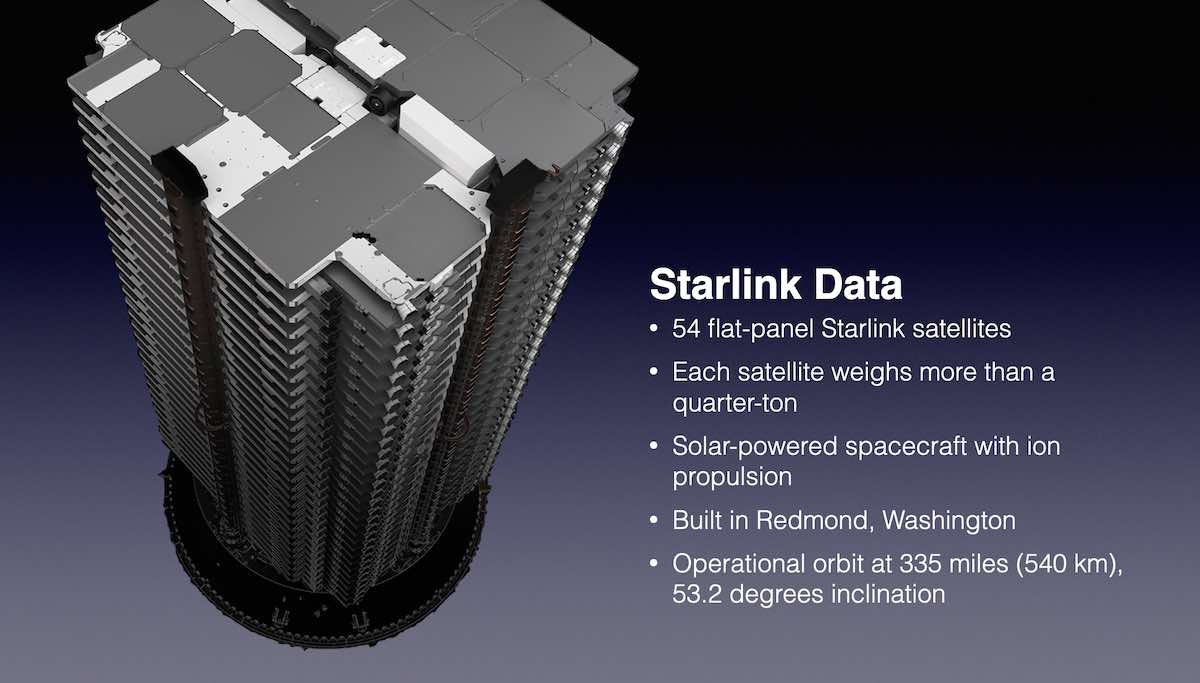 The first stage for Saturday’s launch is designated B1069 in SpaceX’s inventory. The booster completed its second flight to space, after sustaining damage during recovery on a drone ship Dec. 21 following its first mission, which sent a Dragon cargo ship toward the International Space Station.

The rough recovery damaged the rocket’s engines and landing legs, causing the rocket to tilt on its return aboard the drone ship to Port Canaveral. The damage forced SpaceX and NASA to switch to a backup Falcon 9 booster for the launch of four astronauts to the space station in April. That launch was originally supposed to use B1069, which has been refurbished with new engines and other components.

The Falcon 9’s reusable payload fairing jettisoned durning the second stage burn. A recovery ship was also on station in the Atlantic to retrieve the two halves of the nose cone after they splash down under parachutes.

Landing of the first stage on Saturday’s mission occurred moments after the Falcon 9’s second stage engine cut off to deliver the Starlink satellites into orbit. Separation of the 54 Starlink spacecraft, built by SpaceX in Redmond, Washington, from the Falcon 9 rocket was confirmed at T+plus 15 minutes, 21 seconds.

Retention rods released from the Starlink payload stack, allowing the flat-packed satellites to fly free from the Falcon 9’s upper stage in orbit. The 54 spacecraft will unfurl solar arrays and run through automated activation steps, then use krypton-fueled ion engines to maneuver into their operational orbit.

The Falcon 9’s guidance computer aimed deploy the satellites into an elliptical orbit at an inclination of 53.2 degrees to the equator. The satellites will use on-board propulsion to do the rest of the work to reach a circular orbit 335 miles (540 kilometers) above Earth.