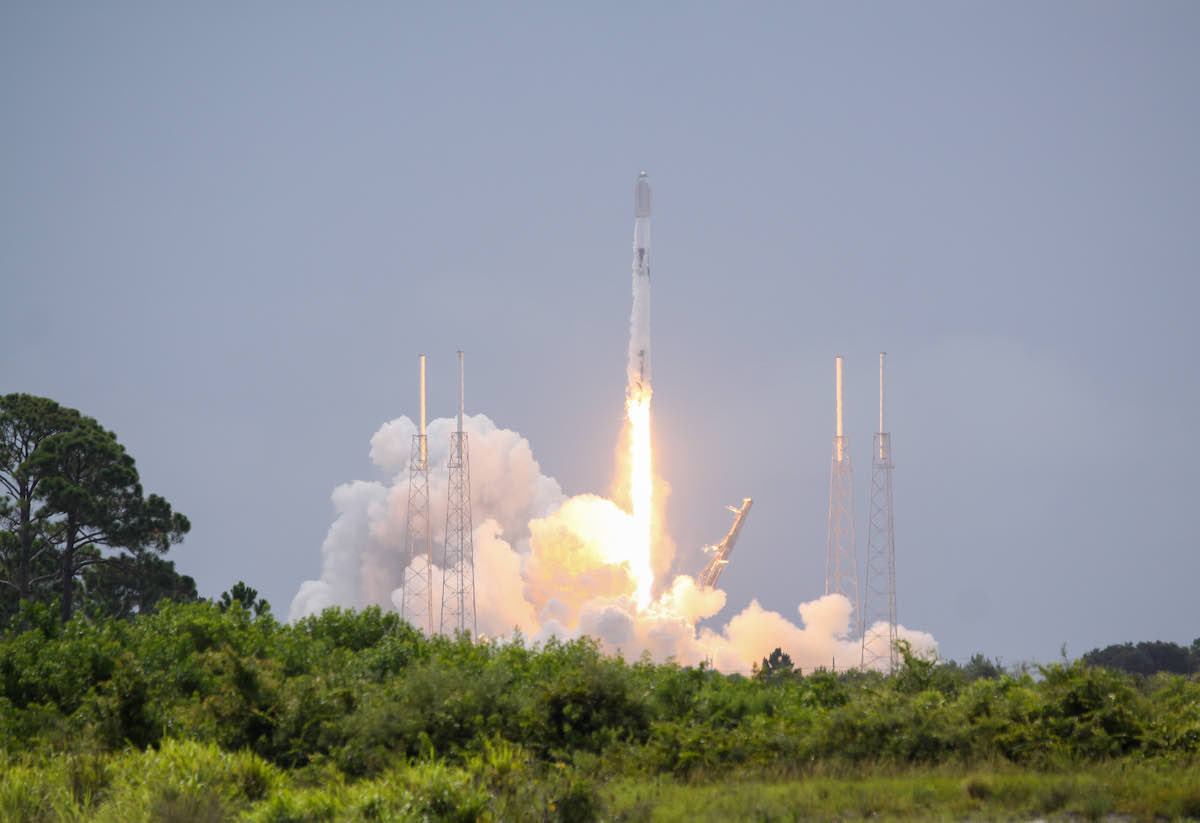 Fifty-three more Starlink internet satellites thundered into orbit from Cape Canaveral atop a Falcon 9 rocket Sunday on SpaceX’s 31st launch of the year, tying the company’s number of missions for all of 2021 and maintaining a pace of one flight per week.

The Falcon 9 rocket lifted off from pad 40 at Cape Canaveral Space Force Station at 10:20 a.m. EDT (1420 GMT) Sunday. Nine Merlin 1D engines flashed to life with 1.7 million pounds of thrust and burned rocket-grade kerosene fuel to drive the Falcon 9 launcher off the pad.

Heading northeast, the Falcon 9 soared over the Atlantic Ocean and climbed through scattered clouds, getting off the ground before rain showers and thunderstorms moved over the spaceport. The launcher passed through the speed of sound in less than a minute and shut down its first stage engines about two-and-a-half minutes into the mission.

The first stage detached from the upper stage and arced to a peak altitude of about 84 miles (135 kilometers) before plunging back into the atmosphere tail first, using four titanium grid fins for control and a braking burn with three of its engines to slow down re-entry.

A final landing burn with the booster’s center engine occurred as the rocket extended four landing legs to settle onto the deck of the drone ship “Just Read the Instructions” about 400 miles (650 kilometers) northeast of Cape Canaveral. The touchdown on the football field-size drone ship marked the 131st landing of a Falcon booster, and the 13th flight of this first stage, known as tail number B1051.

This booster is one of the oldest in SpaceX’s fleet of reusable rockets. B1051 debuted in March 2019 with the first unpiloted test flight of SpaceX’s Crew Dragon spacecraft. Since then, the booster has launched Canada’s Radarsat Constellation Mission, SiriusXM’s SXM 7 radio broadcasting satellite, and nine Starlink missions.

B1051 became the third booster in SpaceX’s inventory to reach the 13-flight milestone, and has now launched 582 satellites in its career spanning more than three years. SpaceX has certified the current generation of Falcon 9 boosters for at least 15 missions, an extension from the original certification of 10 flights.

Sunday’s launch, designated Starlink 4-22, followed a similar profile to most of SpaceX’s recent Starlink missions, with the Falcon 9’s guidance computer targeting an elliptical orbit ranging in altitude between 144 miles and 210 miles (232-by-338 kilometers).

The Falcon 9’s upper stage burned its single Merlin until nearly T+plus 9 minutes. During the upper stage firing, the Falcon 9 jettisoned the two halves of its nose shroud. A SpaceX recovery ship in the Atlantic will pull the fairing shells from the sea after their descent under parachutes. SpaceX said Sunday’s launch was the 50th Falcon rocket flight to use re-flown fairing shells.

After engine cutoff, the second stage coasted across the North Atlantic Ocean before releasing the 53 Starlink satellites at T+plus 15 minutes, 28 seconds.

Staging confirmed. SpaceX confirms the first stage of the Falcon 9 has shut down and jettisoned to begin descending toward a drone ship for landing. The second stage is continuing into orbit with the Starlink satellites.https://t.co/kmJ1W92EsE pic.twitter.com/KvfcbfP9kV

The upper stage spun itself up before deploying the Starlink satellites. The flat-packed spacecraft, each with a mass of more than a quarter-ton, flew free of the Falcon 9 after the rocket released retention rods that keep the satellites firmly attached to the spacecraft during ascent.

Once free of the rocket, the satellites will spread out, unfurl solar panels, and switch on their krypton-fueled ion engines to climb to an altitude of 335 miles (540 kilometers).

The Starlink satellites, each weighing more than a quarter-ton at launch, provide broadband internet service to SpaceX customers around the world. SpaceX builds the spacecraft in Redmond, Washington.

With the 53 satellites launching Sunday, SpaceX has sent 2,858 Starlink spacecraft into orbit, including prototypes and satellites already decommissioned. SpaceX has more than 2,500 Starlink satellites currently working in space, either in service or maneuvering to their final operating orbits, according to Jonathan McDowell, an astrophysicist and expert tracker of spaceflight activity.

That’s about six times as many satellites as the second-largest fleet of spacecraft in orbit — the constellation of 428 internet satellites owned by OneWeb.

SpaceX’s first-generation network will consist of 4,408 operational satellites flying in five orbital “shells” at different inclinations. The Federal Communications Commissions has authorized SpaceX to operate as many Starlink 12,000 satellites, and SpaceX has signaled it could launch more if it sees enough commercial demand. 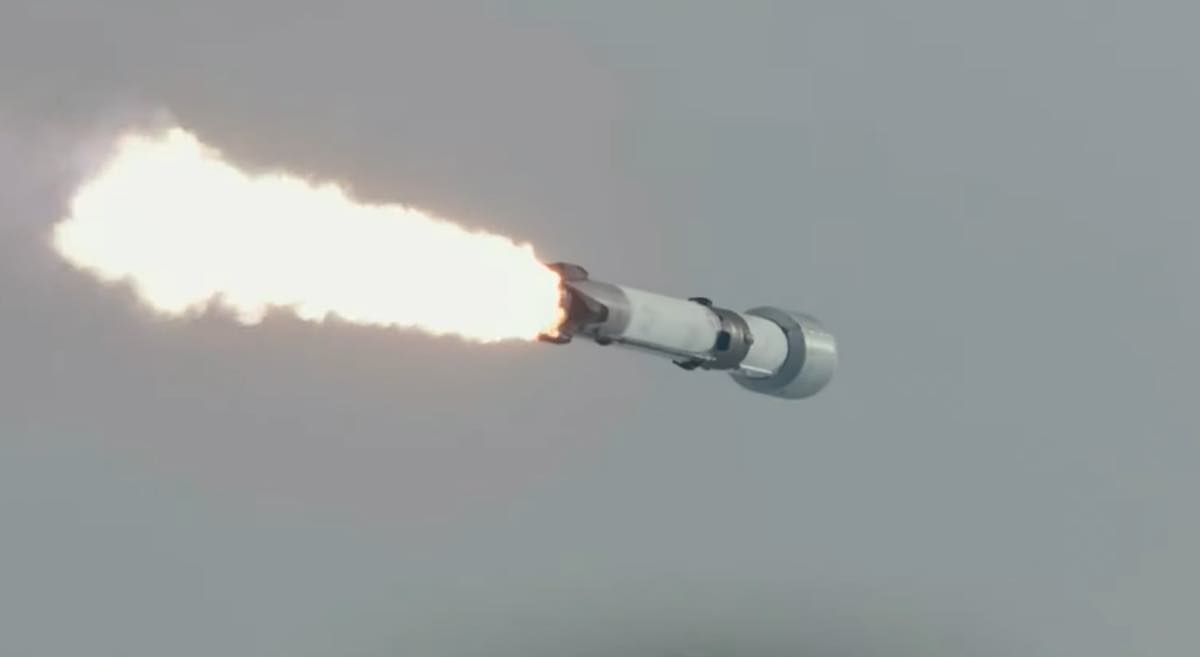 Sunday’s launch was the fourth SpaceX mission of July, following previous Falcon 9/Starlink launches from Cape Canaveral on July 7 and from Vandenberg Space Force Base in California on July 10. A Falcon 9 rocket launched from the Kennedy Space Center on Thursday with Dragon cargo ship heading to the International Space Station.

With 31 missions already completed this year, SpaceX is on track to nearly double its launch rate from 2021. SpaceX launched 31 Falcon 9 missions last year, and flew Falcon 9 rockets 26 times in 2020.

The increased flight rate is enabled by streamlined rocket refurbishment, high demand for Starlink missions, and the more regular use of SpaceX’s launch site at Vandenberg Space Force Base in California, which has hosted six Falcon 9 launches so far this year. There were only three Falcon 9 launches from California last year, and just one SpaceX flight there in 2020.

SpaceX plans two more launches within the next week, both adding more Starlink satellites to the commercial broadband network. A Falcon 9 rocket is scheduled to lift off from Vandenberg on Thursday, and another Falcon 9 its set to launch from the Kennedy Space Center in Florida next Sunday, July 24.