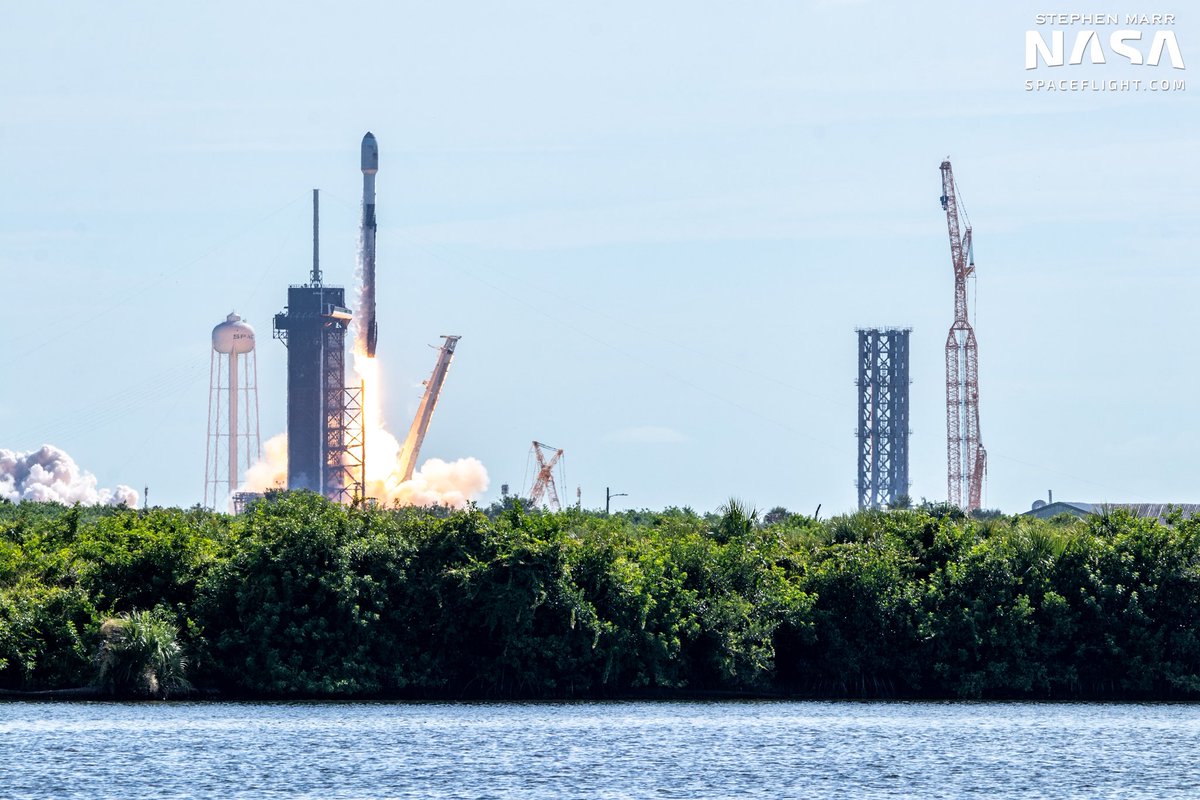 SpaceX launched the Starlink 4-25 mission Sunday, at 9:38 AM EDT (13:38 UTC). A Falcon 9 rocket carried another 53 satellites for the Starlink internet constellation, each with a mass of approximately 300 kilograms. The satellites were deployed into an initial orbit of about 230 by 340 kilometers in altitude at an inclination of 53.2 degrees, separating from the second stage of the launch vehicle slightly more than 15 minutes after liftoff.

The Starlink 4-25 mission marked the eighth flight for Falcon 9 booster 1062, which has previously launched two GPS missions, two private crew missions on Dragon, two earlier Starlink missions, and the Nilesat-301 communications satellite. The launch vehicle performed a static fire test on the morning of Saturday, July 23 ahead of Sunday’s launch.

In anticipation of Sunday’s launch, SpaceX has deployed its Autonomous Spaceport Drone Ship (ASDS), A Shortfall of Gravitas, for booster recovery. Along with support ship Doug, the drone ship will be waiting in the Atlantic Ocean, about 650 km to the northeast of Cape Canaveral, to enable the booster to land after completing its role in the Starlink 4-25 mission.

SpaceX has been keeping up a record launch cadence this year, with Sunday’s launch coming just two days after the previous group of Starlink satellites lifted off from Vandenberg Space Force Base in California. Pad 39A has been turned around in less than ten days, having been last used to launch the CRS-25 cargo mission to the International Space Station on July 15.

The Starlink mission was the 33rd SpaceX launch of 2022, and the 44th for the company in the last twelve months. It was the 26th SpaceX launch of the year from Florida, and the 12th of these to use LC-39A. After Starlink 4-25, SpaceX’s next expected launch will be the Danuri (KPLO) lunar orbiter mission for South Korea, which will depart from Florida on the evening of August 2.

The satellites being deployed on Sunday’s launch will continue to fill out the fourth shell of the Starlink constellation, in 540 km altitude orbits inclined at 53.2 degrees. This shell overlays the first shell of the constellation which is currently providing service to mid and low-latitude regions from orbital planes at 53 degrees inclination and 550 km altitude.

The newer satellites filling shell four are equipped with inter-satellite links that will allow service to areas without ground gateways, including ships and planes crossing the oceans. These services are expected to come online in early 2023 when the shell is complete. For global coverage at high latitudes, more satellites will be required in high-inclination orbits. This function will be fulfilled in part by satellites in Shell 3 at 97.6 degrees, which have recently begun launching from Vandenberg. 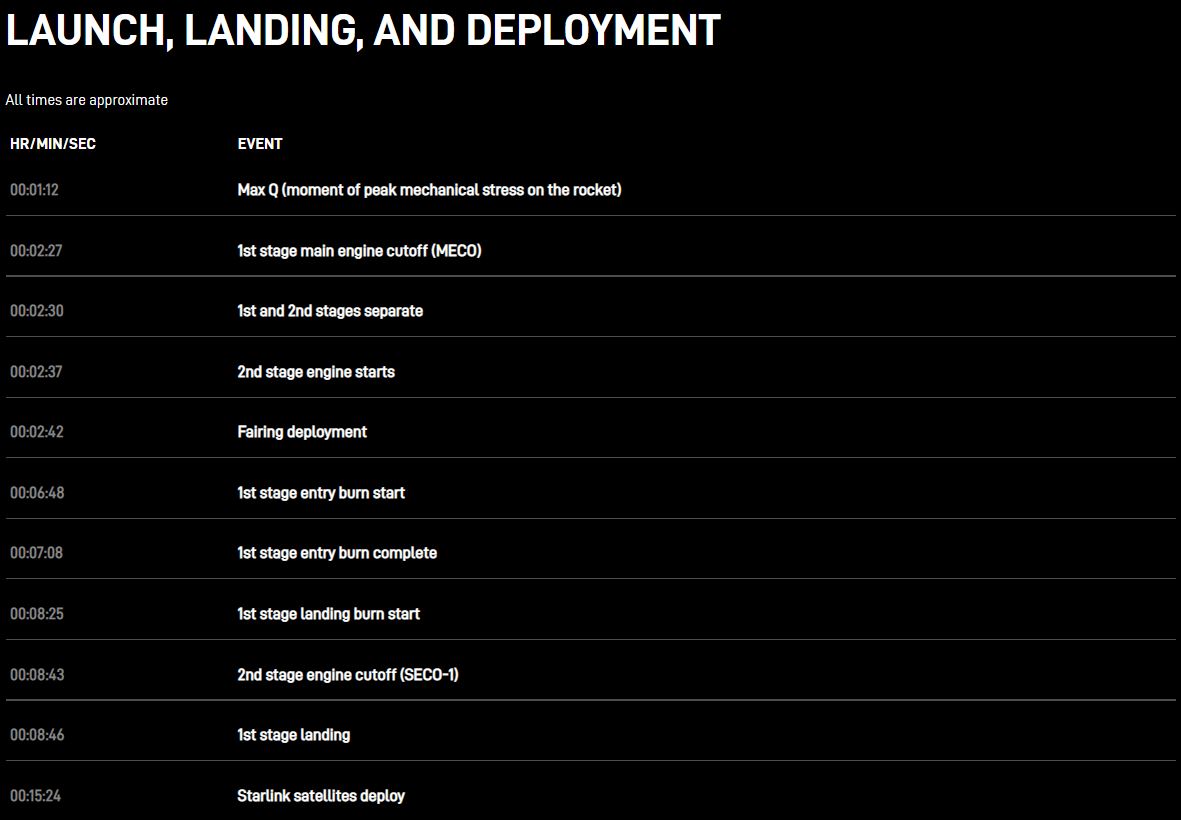 This launch will bring the number of active Starlink satellites in orbit to about 2,668: 60% of the total 4,408 satellites needed to fill the first generation constellation. Shell 4 will increase to around 1,025 of its full 1,584-satellite complement, with about 670 of those already in their final positions. This shell will need about 12 more launches for completion (data via Jonathan McDowell’s Starlink statistics page).

The number of satellites on each launch can vary based on the exact flight path being used and whether rideshare passengers are included on the flight. At least two rideshares are expected on Starlink shell 4 flights in the next few months. One flight scheduled for September 15 will carry the BlueWalker 3 test satellite for AST & Science’s SpaceMobile constellation that will provide broadband connections directly to cell phones from orbit. Another flight is expected to carry Boeing’s Varuna test satellite to demonstrate V-band communications, using a Spaceflight Sherpa-LTC vehicle as the satellite body.

Satellites filling orbital planes within Shell 4 of the Starlink constellation from January to July of 2022. (Credit: Ben Craddock for NSF)

The visualization above shows Starlink satellites being grouped into their orbital planes within shell 4 of the constellation over the last six months. This shell has 72 orbital planes. When filled each plane has 18 evenly spaced active satellites providing service and two spares.

As each group of 40-60 satellites is launched they go to a phasing orbit at around 350km altitude where they will drift until they line up with their intended plane within the shell. When they are in the proper alignment a group of up to 20 satellites will climb to the operational altitude. Satellites from multiple launches may be used to fill a particular plane.

It takes around three months for all of the satellites from a launch to reach their final position. As with the first shell, SpaceX is starting by filling 36 evenly spaced planes, then filling between them with subsequent launches. With the rapid launch cadence this year there are 300-400 satellites moving into position at any time.