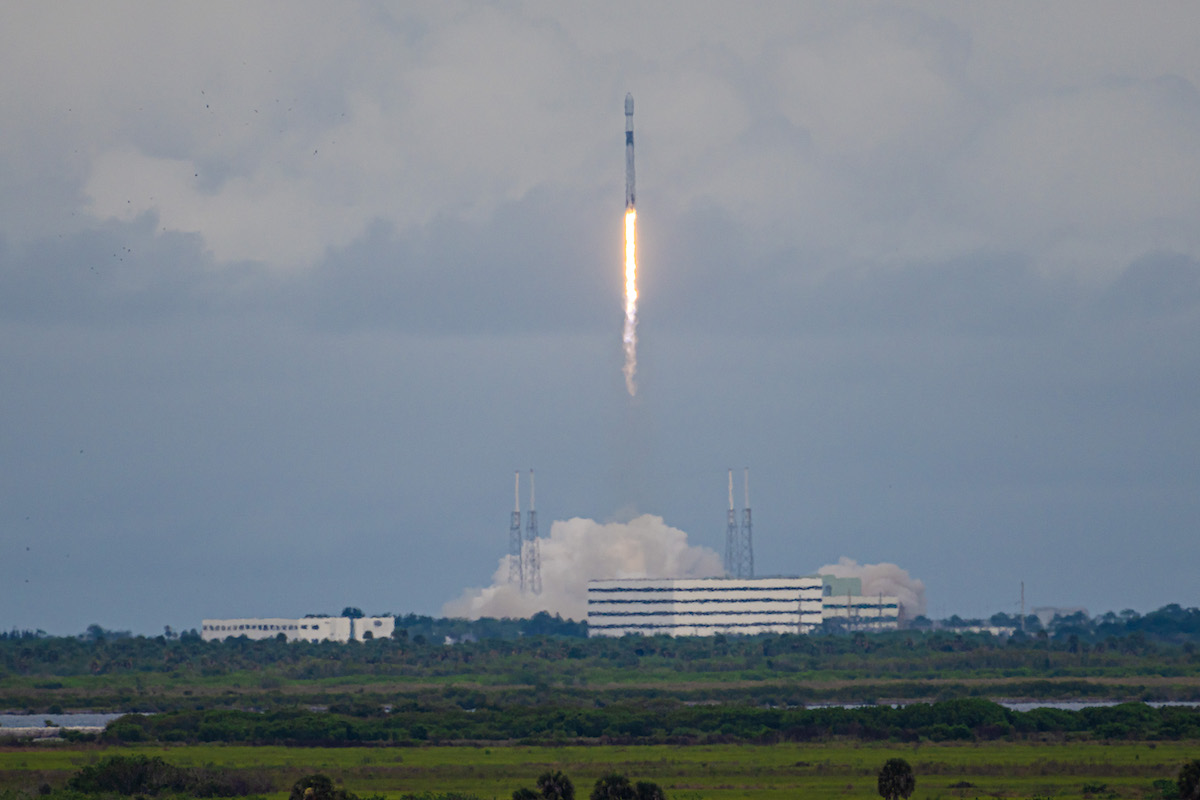 SpaceX closed out the first half of 2022 with its 27th mission of the year, powering a commercial television broadcasting satellite into orbit for SES on a Falcon 9 rocket as the company is poised to break its annual launch record in the coming weeks.

The Falcon 9 rocket delivered the SES 22 communications into an elliptical, or oval-shaped, transfer orbit on the way to an operating perch in geostationary orbit, where the spacecraft will circle Earth over the equator, matching its velocity to the planet’s rotation.

SES 22, built by Thales Alenia Space, is the first of five new C-band television broadcasting satellites SES plans to launch this year. All will take off from Cape Canaveral, with three assigned to two SpaceX Falcon 9 missions — including SES 22 launched Wednesday — and two satellites booked to fly on a United Launch Alliance Atlas 5 rocket in the late August or September timeframe.

The satellites will help SES reconfigure its television broadcast services to a narrower segment of the C-band radio spectrum after the Federal Communications Commission approved a plan to repurpose some of the spectrum previously used for television and radio programming to terrestrial 5G cellular broadband networks.

“We are thrilled with the successful launch of SES 22, thanks to our partners at Thales Alenia Space and SpaceX,” said Steve Collar, CEO of SES. “The launch of SES 22, together with other upcoming C-band satellite launches scheduled this year, will enable us to continue providing the high-quality services that our customers have been accustomed to over the last several decades, while freeing up spectrum that will enable the US to rapidly unlock the promise of 5G.”

The booster engines shut down and the first stage separated from the Falcon 9’s upper stage, which continued into orbit with the SES 22 spacecraft. 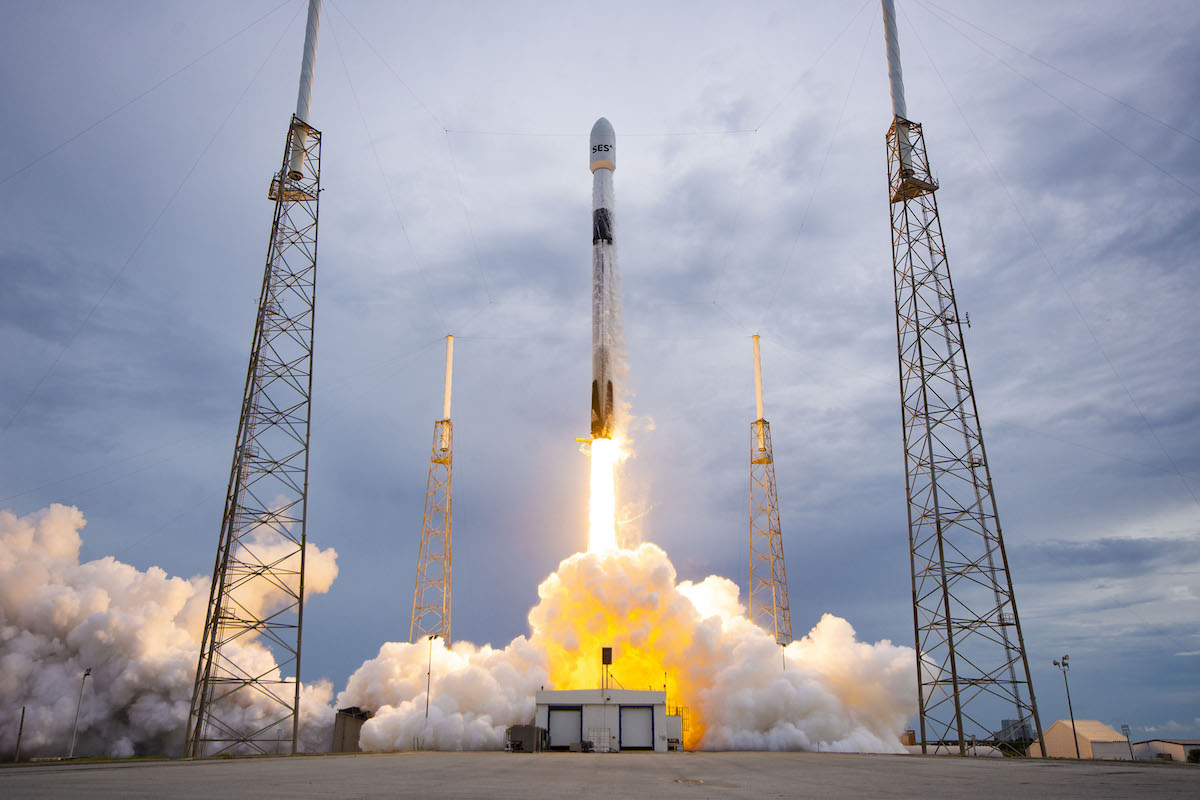 A SpaceX Falcon 9 rocket lifts off with the SES 22 communications satellite. Credit: SpaceX

The booster stage — known as tail number B1073 in SpaceX’s fleet of reusable rockets — extended titanium grid fins and maneuvered itself into a tail-first orientation for re-entry. Braking burns with the Merlin engines slowed the rocket for a vertical landing on extendable legs aboard a drone ship positioned more than 400 miles (about 670 kilometers) downrange in the Atlantic Ocean.

The landing completed the booster’s second trip to space, following a debut flight in May carrying a batch of SpaceX Starlink internet satellites.

The upper stage of the Falcon 9 rocket ignited its single Merlin engine for two burns, first to reach a preliminary parking orbit, then send the SES 22 satellite to a higher altitude and into an orbit closer to the equator.

The Falcon 9 rocket deployed its payload into an on-target orbit ranging between 192 miles and 22,137 miles (310-by-35,627 kilometers), according to publicly available U.S. military tracking data. The satellite, weighting about 3.5 metric tons (7,700 pounds) at launch, was separated from the rocket about 33 minutes after liftoff in an orbit inclined 16.5 degrees to the equator.

SES, based in Luxembourg and one of the largest traditional geostationary satellite operators, confirmed the new satellite was functioning as designed and communicating with ground controllers after Wednesday’s launch.

SES 22 will unfurl its solar panels and antennas, and perform a series of orbit-raising burns with a liquid-fueled engine to circularize its orbit at geostationary altitude over the equator. The geostationary orbit gives satellites a fixed view of the same geographic region of the planet, and allows ground-based antennas to point at the same position in the sky.

“SES 22 is a C-band satellite, so it’s part of our program of C-band clearing in the U.S.,” said Christophe De Hauwer, SES’s chief strategy and development officer. “It’s a C-band only satellite. It will be launched to 135 degrees west (longitude), which is the location we are replenishing, from where we will provide mostly TV and radio services over the U.S., but also some data services over the country.”

Falcon 9 has landed! SpaceX’s reusable first stage has touched down on the drone ship “A Shortfall of Gravitas” east of Cape Canaveral in the Atlantic Ocean. This completes the second flight to space for this rocket — tail number B1703. https://t.co/uOjZxThap8 pic.twitter.com/A6eD2FCkoV

After completing in-orbit verification testing, SES 22 is scheduled to enter commercial service in early August, according to De Hauwer. The satellite is designed for a 15-year mission.

The Federal Communications Commission’s finalized a program in 2020 to clear 300 megahertz of C-band spectrum for the roll-out of 5G mobile connectivity networks.

In compensation for losing the spectrum, Intelsat and SES — the two largest C-band satellite operators in the U.S. market — are set to receive $4.87 billion and $3.97 billion from 5G bidders, respectively, if they can accelerate the transition of C-band services to a smaller swath of spectrum by December 2023, two years before the FCC’s mandated deadline.

Intelsat and SES — along with operators with a smaller share of the U.S. C-band market — will be reimbursed for their C-band relocation costs, including satellite manufacturing and launch expenses, by the winners of the FCC’s C-band auction.

As part of the agreement, the satellite operators were incentivized to buy new C-band broadcasting satellites from U.S. manufacturers to operate in the 4.0 to 4.2 GHz swath of the C-band spectrum. The lower portion of the band previously allocated to satellite operators — 3.7 to 4.0 GHz — is being transitioned to 5G services.

SES says the new C-band satellites will enable the broadcast of digital TV services to nearly 120 million homes in the United States.

“We have to have more satellites in the sky so that we then spread the loading on a larger number of satellites as opposed to what we have now,” De Hauwer said. “We will launch five C-band satellites. They’re all going to be launched this year, or this is certainly the plan. With that, we’ll be good. That’s the capacity we need in the sky in order to do the repacking (of the C-band spectrum).” 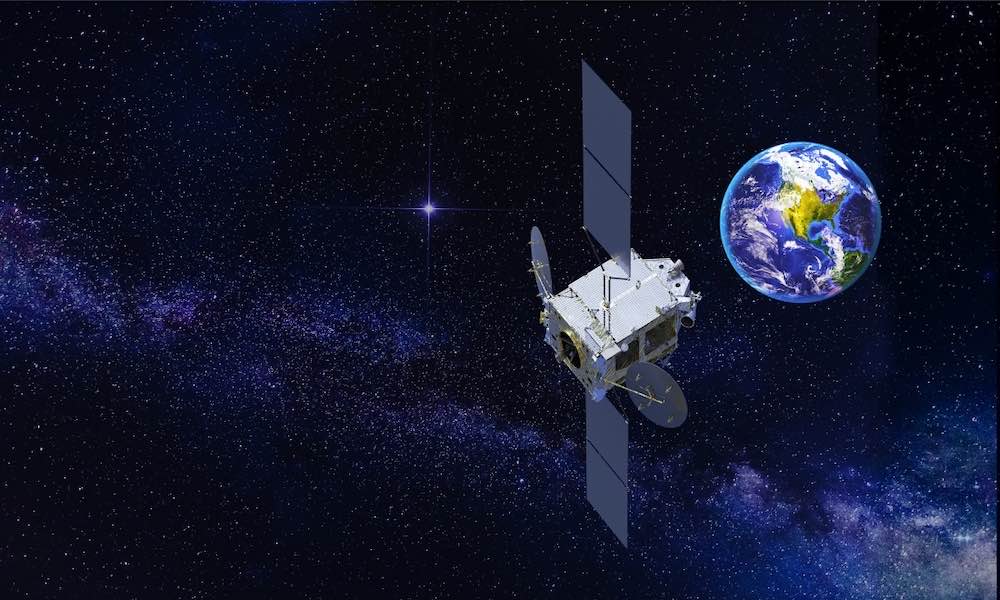 Launching all the new C-band satellites quickly was a critical part of the spectrum clearing program. The C-band satellite launches with ULA and SpaceX are scheduled before the end of the year.

“Part of our main criteria in selecting the different vendors was what will be the timeline for them to deliver the spacecraft,” De Hauwer said. “Timing is everything in this program.”

In parallel with deploying the C-band broadcasting satellites this year, SES is preparing to launch the first six satellites for the company’s O3b mPower broadband network, providing data connectivity and internet services around the world.

The first six O3b mPower satellites will launch on three Falcon 9 rockets, heading for positions in a unique orbit at an altitude of about 5,000 miles (8,000 kilometers). Those three launches — all from Cape Canaveral — are currently on track to fly by the end of 2022, according to SES.

The busy satellite deployment campaign comes after a relatively quiet period in launches for SES, with just one new SES satellite launched since 2019. But the schedules for two different segments of SES’s business have aligned to create this year’s rapid-fire launch cadence.

The O3b mPower program, first announced in 2017, is nearing the finish line in development, while the the new C-band TV satellites are completing their testing for launch.

With Wednesday’s mission, SpaceX has launched 27 Falcon 9 rocket flights since Jan. 1, including 22 from Florida’s Space Coast and five from Vandenberg Space Force Base in California. The company’s record for launches in a calendar year is 31, set last year, and SpaceX is expected to tie or break the record by the end of July.

Three Falcon 9 rockets are scheduled to launch in the first half of July, beginning with a launch from Cape Canaveral on July 7 with another group of Starlink internet satellites. Another Starlink mission from Vandenberg and a cargo mission to the International Space Station from the Kennedy Space Center are also scheduled to launch in early-to-mid July.

Additional Falcon 9 missions with Starlink satellites are planned later in the month.