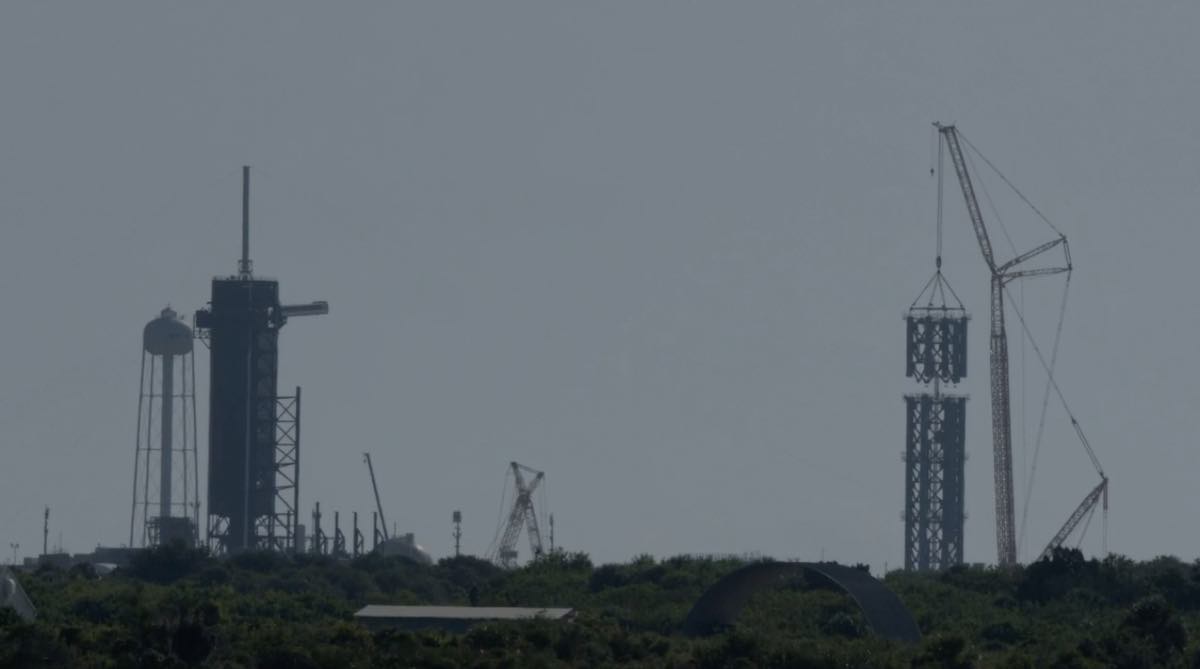 The fourth of nine sections for SpaceX’s Starship launch pad gantry was moved to Launch Complex 39A Wednesday night for stacking, following the emplacement of the tower’s first three segments last month.

The transfer of the five-story-tall structure from SpaceX’s construction site at the company’s Roberts Road facility to pad 39A stretched about 7 miles (11 kilometers) and was completed around nightfall Wednesday. The gantry section rode a 96-wheel self-propelled transporter for the road trip to pad 39A.

A large crane moved into position over the tower segment Thursday morning to begin lifting it into place on the tower.

The Starship launch pad in Florida is expected to resemble the tower SpaceX built last year at Boca Chica Beach in Texas, where the company plans to launch the Super Heavy booster and Starship rocket on its first orbital test flight. Operational Super Heavy and Starship missions will likely launch from Florida, according to statements from Elon Musk, SpaceX’s founder and CEO.

The launch pad tower under construction at pad 39A sits about 1,000 feet, or 300 meters, east of the location where SpaceX launches Falcon 9 and Falcon Heavy rockets carrying satellites and astronauts into orbit.

Like the launch site in Texas, SpaceX does not plan to dig a flame trench for the Starbase pad at Kennedy. The Super Heavy booster, with roughly 33 methane-fueled Raptor engines, will take off from its elevated launch mount with around 17 million pounds of thrust, nearly twice that of NASA’s most powerful rocket, the Space Launch System, a fully expendable vehicle.

The Super Heavy and Starship stack — comprising the rocket’s first and second stages — will be fully reusable. The entire rocket stands nearly 400 feet (120 meters) tall, and is made of stainless steel.

SpaceX plans to move the remaining tower segments to pad 39A in the coming weeks, aiming to finish the tower structure as soon as next month. Then teams will move the Super Heavy launch pedestal and articulating “chopstick” arms for integration at the launch site at pad 39A.