Researchers at Penn State University have studied a new technique that could use a star’s ability to focus and magnify communications which could be passing through our own solar system, and has been accepted for publication in The Astronomical Journal and was part of a graduate course at Penn State covering the Search for Extraterrestrial Intelligence (SETI. The study describes our Sun as potentially acting as a kind of node as part of an interstellar communication network involving probes or relays near our Sun, acting like cellular telephone towers in space. 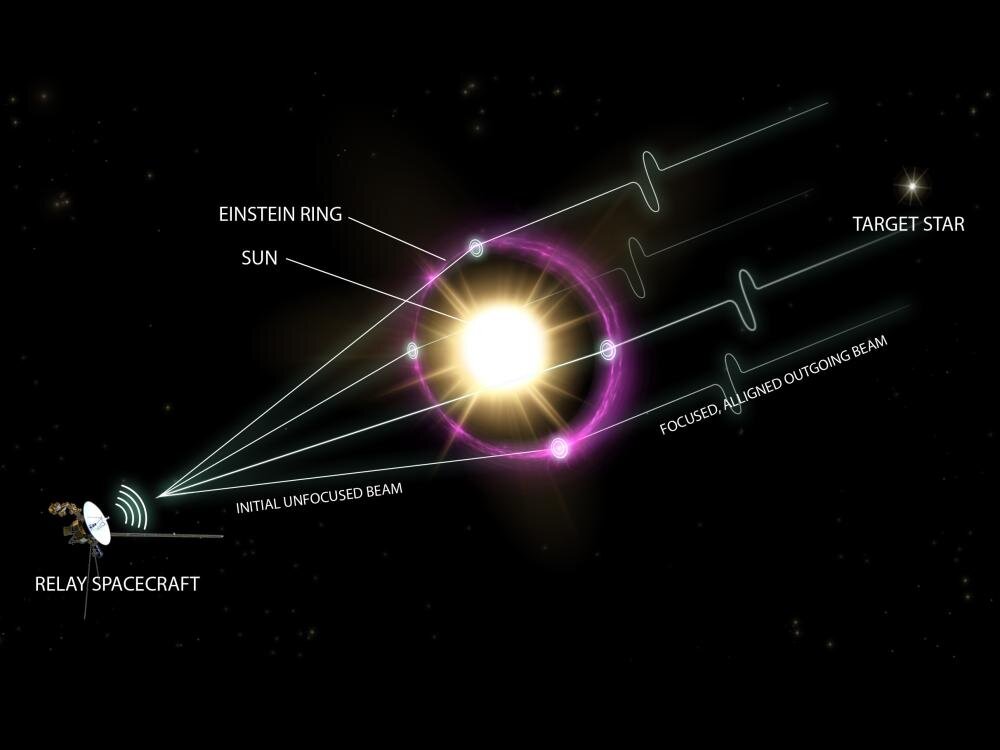 Communications across interstellar distances could take advantage of a star’s ability to focus and magnify communication signals through an effect called gravitational lensing. A signal from—or passing through—a relay probe would bend due to gravity as it passes by the star. The warped space around the object acts somewhat like a lens of a telescope, focusing and magnifying the light. A new study by researchers at Penn State investigated our solar system for communication signals that might be taking advantage of our own sun. (Credit: Dani Zemba / Penn State)

The study discusses an effect called gravitational lensing, which is part of Einstein’s Theory of General Relativity, and involves the bending of light as it passes by massive objects like stars and black holes. This causes the space around the object to warp, focusing and magnifying the light much like a telescope lens. For this study, the researchers propose this same technique could be used to relay communications across the vast distances of space.

“Astronomers have considered taking advantage of gravitational lensing as a way to essentially build a giant telescope to look at planets around other stars,” said Jason Wright, professor of astronomy and astrophysics at Penn State who taught the course and is director of the Penn State Extraterrestrial Intelligence Center. “It has also been considered as a way that humans might communicate with our own probes if we ever sent them to another star. If an extraterrestrial technological species were to use our sun as a lens for interstellar communication efforts, we should be able to detect those communications if we look in the right place.”

For this study, the researchers used the gravitational focus of our ow Sun, which lies approximately 550 AU (astronomical units) away, with one AU being equal to the distance from the Sun to the Earth, and 550 AU lies between the orbits of Jupiter and Saturn. For gravitational lensing, the gravitational focus is where the light-bending phenomena occurs, which is where this study believed the nearest probe would be located in our solar system to use our sun as a lens.

“Humans use networks to communicate across the world all the time,” said Nick Tusay, a graduate student in the course and lead author on the study. “When you use a cell phone, the electromagnetic waves are transmitted to the nearest cellular tower, which connects to the next tower and so on. TV, radio, and internet signals also take advantage of network communication systems, which have many advantages over point-to-point communications. On an interstellar scale, it makes sense to use stars as lenses, and we can infer where probes would need to be located in order to use them.”

Unfortunately, the students did not detect any signals of extraterrestrial origin in the wavelengths they observed, and since this study was a class project, the research carried out only involved one night of observations. However, the insight into how we might contact extraterrestrial civilizations beyond Earth no doubt proved invaluable to both the faculty and students involved in the project. This particular graduate-level course is only one of two in the world, with the other at the University of California, Los Angeles, that encourages students to conduct such radio-based SETI projects and publish their results in a scientific journal.

“This graduate course is the centerpiece of the Penn State Center for Extraterrestrial Intelligence,” said Wright. “Students come from a variety of disciplines, including astrobiology, astronomy, chemistry, and geophysics. This year, because it was a hybrid class, we even had a student from another university join us. One of the neat things about this class is that, because the SETI field is so young, it is possible for students to make a real contribution and publish research. It’s remarkable.”

Searching the skies for radio signals from extraterrestrial civilizations is an ongoing endeavor. However, for the time being the strongest candidate for an extraterrestrial candidate ever detected is the Wow! signal, which was a radio signal detected by Ohio State University’s Big Ear telescope on August 15, 1977, lasting a mere one minute and 12 seconds, which astronomers currently hypothesize to have come from a sun-like star located 1,800 light-years away in the constellation Sagittarius. 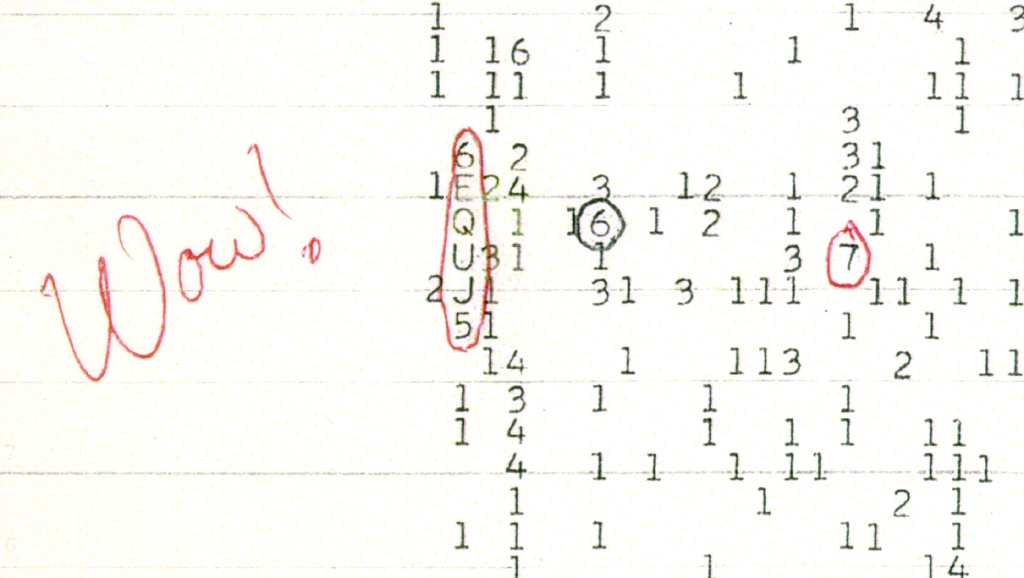 The Wow! signal represented as “6EQUJ5”. The original printout with Ehman’s handwritten exclamation is preserved by Ohio History Connection. It was pointed towards the Proxima Centauri system. The signal was used to support the search for extraterrestrial intelligence. (Credit: Big Ear Radio Observatory and North American AstroPhysical Observatory (NAAPO))

Are we alone in the universe? Are there other technological civilizations searching the cosmos for other signals, as well? Only time will tell, and this is why we science!

The post Snooping on Alien Messages Passing Through the Solar System appeared first on newsastronomy.com.